Hanky-Panky With Money Department Of Correction 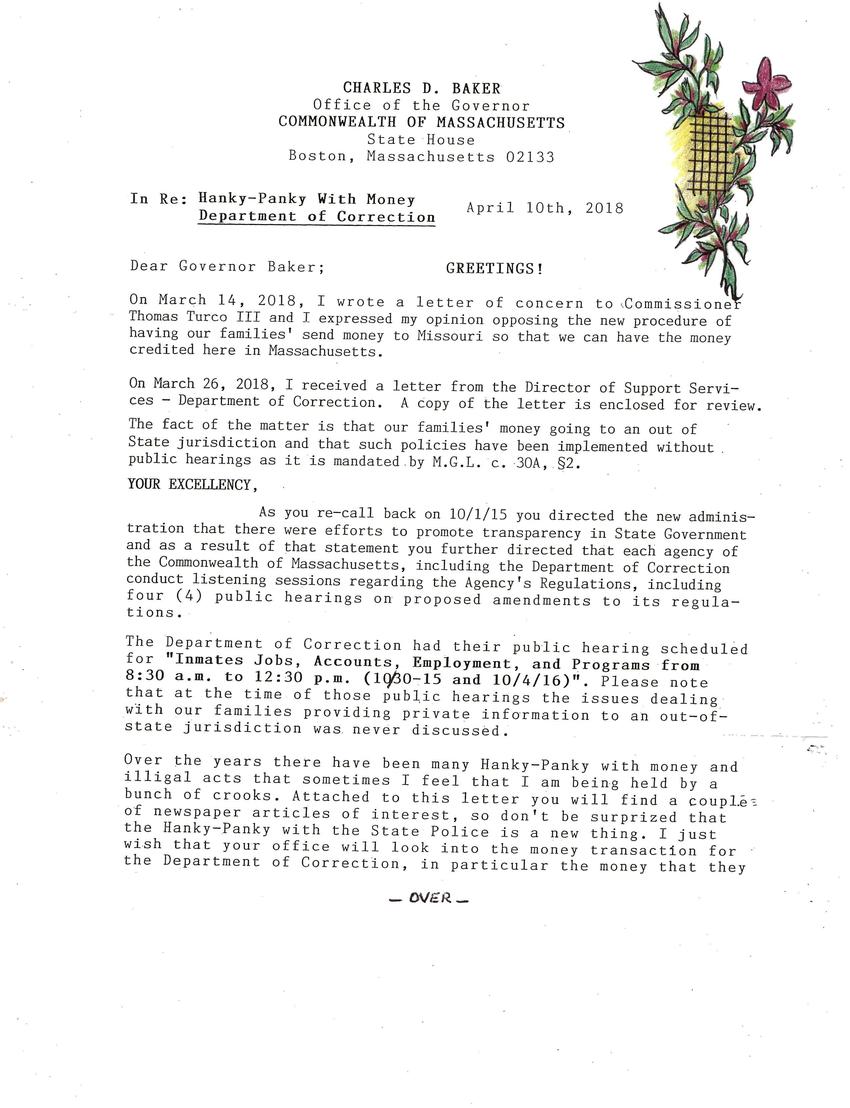 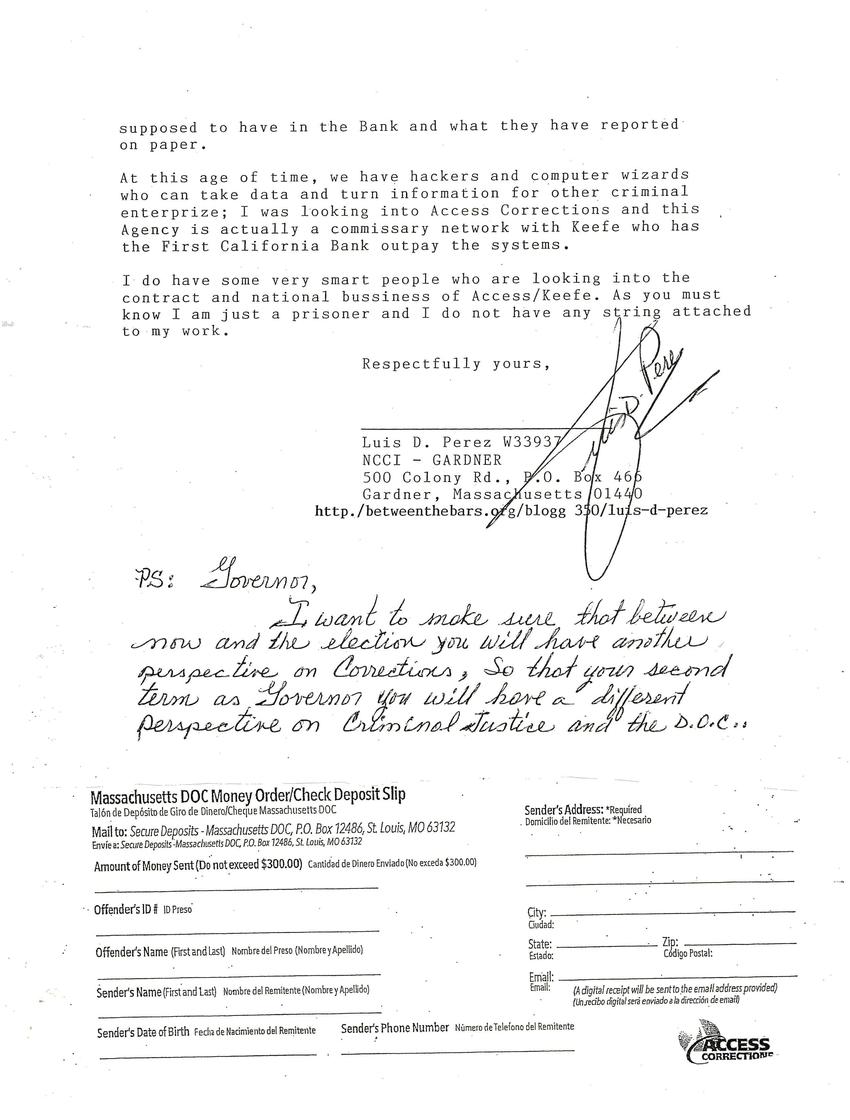 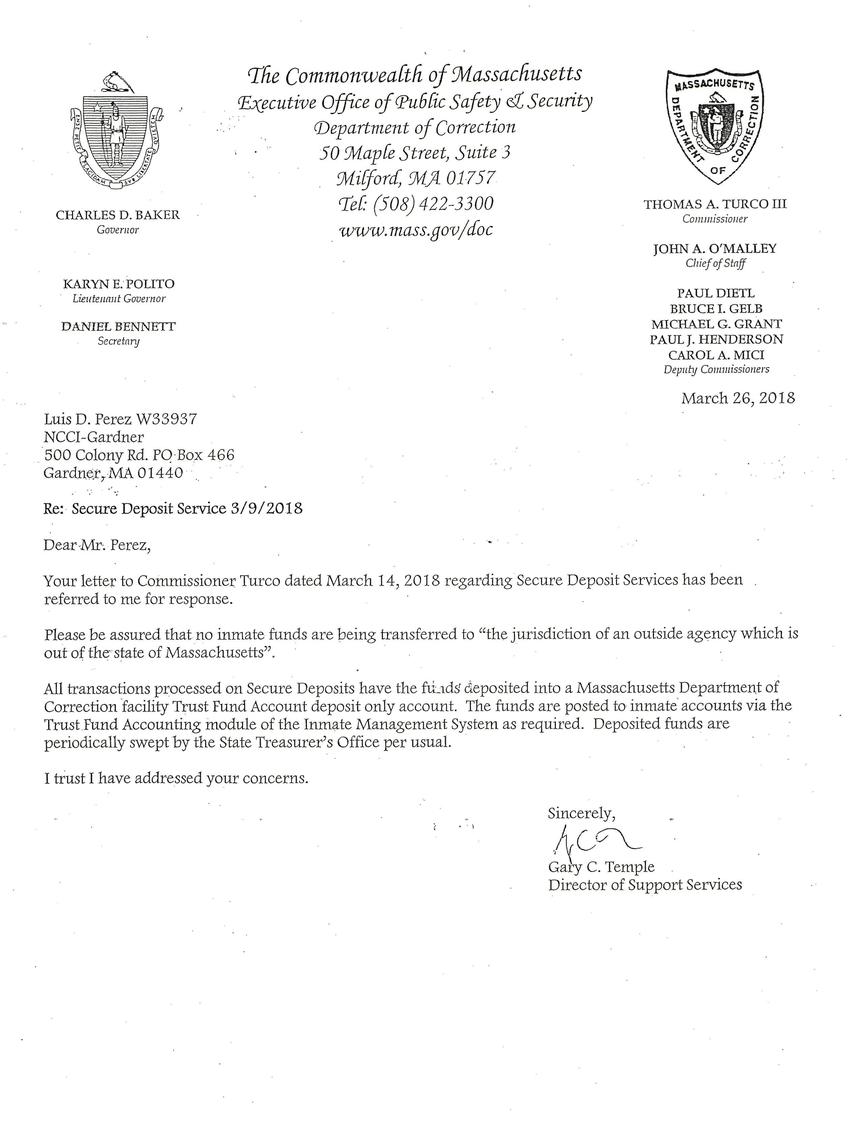 In Re: Hanky-Panky With Money
Department of Correction

Dear Governor Baker;
GREETINGS!
On March 14, 2018, I wrote a letter of concern to Commissioner Thomas Turco III and I expressed my opinion opposing the new procedure of having our families' send money to Missouri so that we can have the money credited here in Massachusetts.

On March 26, 2018, I received a letter from the Director of Support Services - Department of Correction. A copy of the letter is enclosed for review.
The fact of the matter is that our families' money going to an out of State jurisdiction and that such policies have been implemented without public hearing as it is mandated by M.G.L. c. 30A, 2.

YOUR EXCELLENCY,
As you re-call back on 10/1/15 you directed the new administration that there were efforts to promote transparency in State Government and as a result of that statement you further directed that each agency of the Commonwealth of Massachusetts, including the Department of Correction conduct listening sessions regarding the Agency's Regulations, including four (4) public hearings on proposed amendments to its regulations.

The Department of Correction had their public hearing scheduled for "Inmates Jobs, Accounts, Employment, and Programs from 8:30 a.m. to 12:30 p.m. (10/30/15 and 10/4/16)". Please note that at the time of those public hearing the issues dealing with our families providing private information to an out-of-state jurisdiction was never discussed.

Over the years there have been many Hanky-Panky with money and illegal acts that sometimes I feel that I am being held by a bunch of crooks. Attached to this letter you will find a couple of newspaper articles of interest, so don't be surprised that the Hanky-Panky with the State Police is a new thing. I just wish that your office will look into the money transaction for the Department of Correction, in particular the money that they supposed to have in the Bank and what they have reported on paper.

At this age of time, we have hackers and computer wizards who can take data and turn information for other criminal enterprise; I was looking into Access Corrections and this Agency is actually a commissary network with Keefe who has the First California Bank outpay the systems.

I do have some very smart people who are looking into the contract and national business of Access/Keefe. As you must know I am just a prisoner and I do not have any string attached to my work.

JOHN A. O'MALLEY
Chief of Staff

Your letter to Commissioner Turco dated March 14, 2018 regarding Secure Deposit Services has been referred to me for response.

Please be assured that no inmate funds are being transferred to "the jurisdiction of an outside agency which is out of the state of Massachusetts".

All transactions processed on Secure Deposits have the funds deposited into a Massachusetts Department of Correction facility Trust Fund Account deposit only account. The funds are posted to inmate accounts via the Trust Fund Accounting module of the Inmate Management System as required. Deposited funds are periodically swept by the State Treasurer's Office per usual.

I trust I have addressed your concerns.