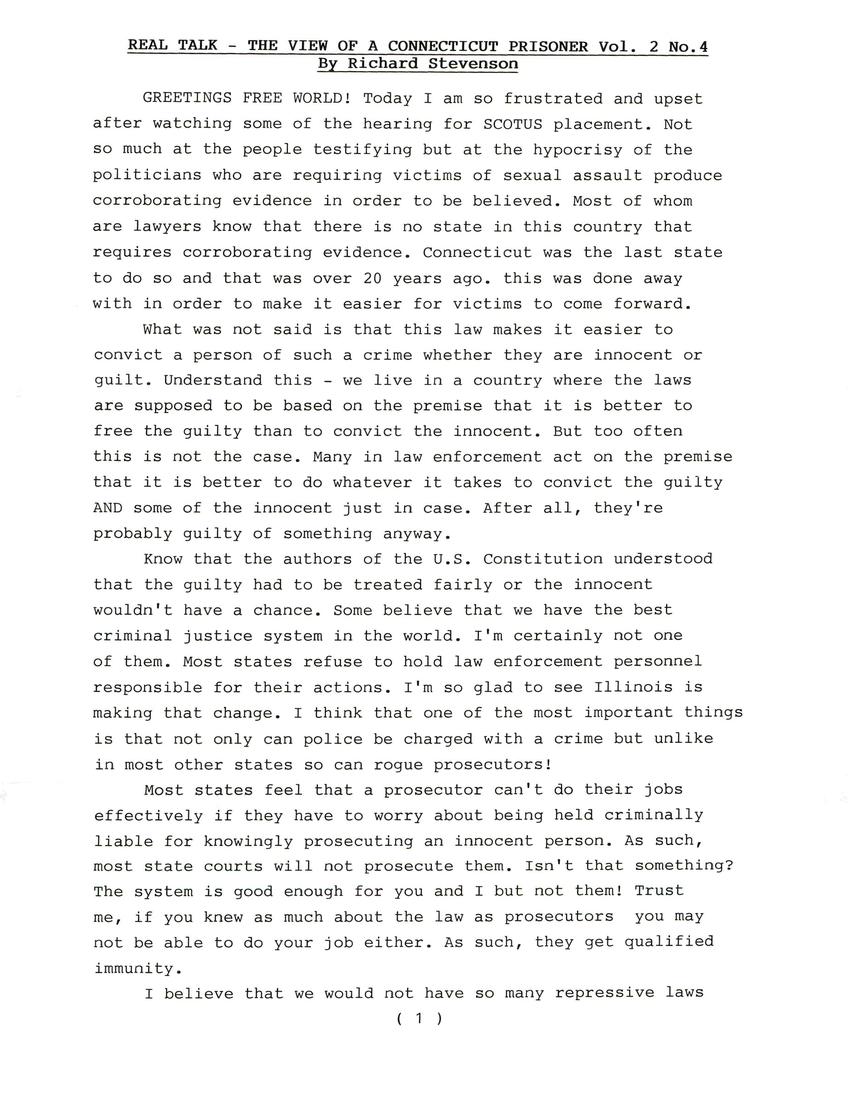 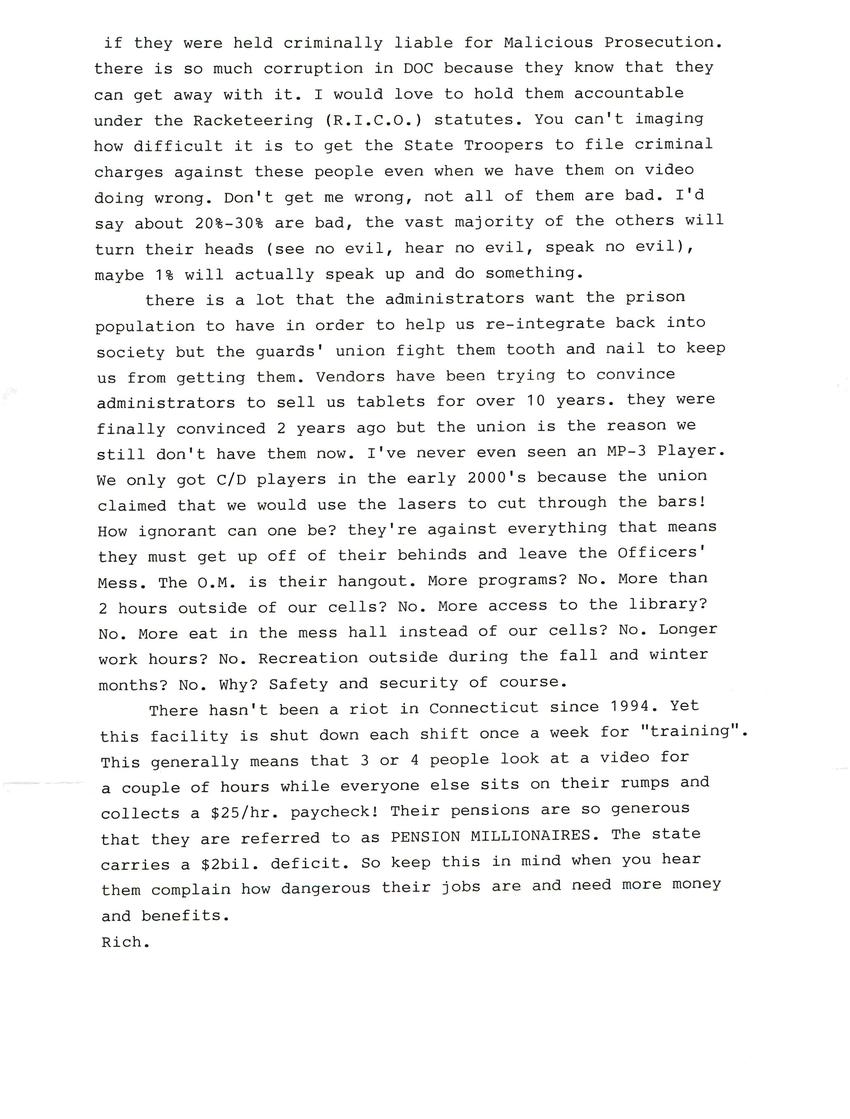 REAL TALK - The View of a Connecticut Prisoner Vol. 2, No. 4
By Richard Stevenson

Greetings, Free World! Today, I am so frustrated and upset after watching some of the hearings for SCOTUS placement. Not so much at the people testifying but at the hypocrisy of the politicians who are requiring victims of sexual assault to produce corroborating evidence in order to be believed. Most of whom are lawyers who know that there is no state in this country that requires corroborating evidence. Connecticut was the last state to do so, and that was over 20 years ago. This was done away with in order to make it easer for victims to come forward.

What was not said is that this law makes it easier to convict a person of such a crime whether they are innocent or guilty. Understand this: we live in a country where the laws are supposed to be based on the premise that it is better to free the guilty than to convict the innocent. But too often, this is not the case. Many in law enforcement act on the premise that it is better to do whatever it takes to convict the guilty AND some of the innocent, just in case. After all, they're probably guilty of something anyway.

Know that the authors of the US Constitution understood that the guilty had to be treated fairly or the innocent wouldn't have a chance. Some believe that we have the best criminal justice system in the world. I'm certainly not one of them. Most states refuse to hold law enforcement personnel responsible for their actions. I'm so glad to see Illinois is making that change. I think that one of the most important things is that not only can police be charged with a crime but, unlike in most other states, so can rogue prosecutors!

Most states feel that a prosecutor can't do their jobs effectively if they have to worry about being held criminally liable for knowingly prosecuting an innocent person. As such, most state courts will not prosecute them. Isn't that something? The system is good enough for you and I, but not them! Trust me, if you knew as much about the law as prosecutors, you may not be able to do your job either. As such, they get qualified immunity.

I believe that we would not have so many repressive laws if they were held criminally liable for malicious prosecution. There is so much corruption in DOC because they know that they can get away with it. I would love to hold them accountable under the racketeering (RICO) statutes. You can't imagine how difficult it is to get the state troopers to file criminal charges against these people, even when we have them on video doing wrong. Don't get me wrong, not all of them are bad. I'd say about 20-30% bad, the vast majority of others will turn their heads (see no evil, hear no evil, speak no evil). Maybe 1% will actually speak up and do something.

There is a lot that the administrators want the prison population to have in order to help us reintegrate back into society, but the guards' union fight them tooth and nail to keep us from getting them. Vendors have been trying to convince us administrators to sell us tablets for over 10 years. They were finally convinced two years ago, but the union is the reason we still don't have them. I've never ever seen an mp3 player. We only got CD players in the 2000s because the union claimed that we would use the lasers to cut through the bars! How ignorant can they be?

They're against everything that means getting off their behinds and leaving the officers' mess. The OM is their hangout. More programs? No. More access to the library? No. More eat in the mess hall instead of our cells? No. Longer work hours? No. Recreation outside during the fall and winter months? No. Why? Safety and security, of course.

There hasn't been a riot in Connecticut since 1994. Yet this facility is shut down each shift once a week for "training". This generally means three or four people look at a video for a couple of hours while everyone else sits on their rumps and collects $25 an hour. Paycheck! Their pensions are so generous that they are referred to as pension millionaires! The state carries a $2 billion deficit. So keep this in mind when you hear them complain how dangerous their jobs are, and need more money and benefits.