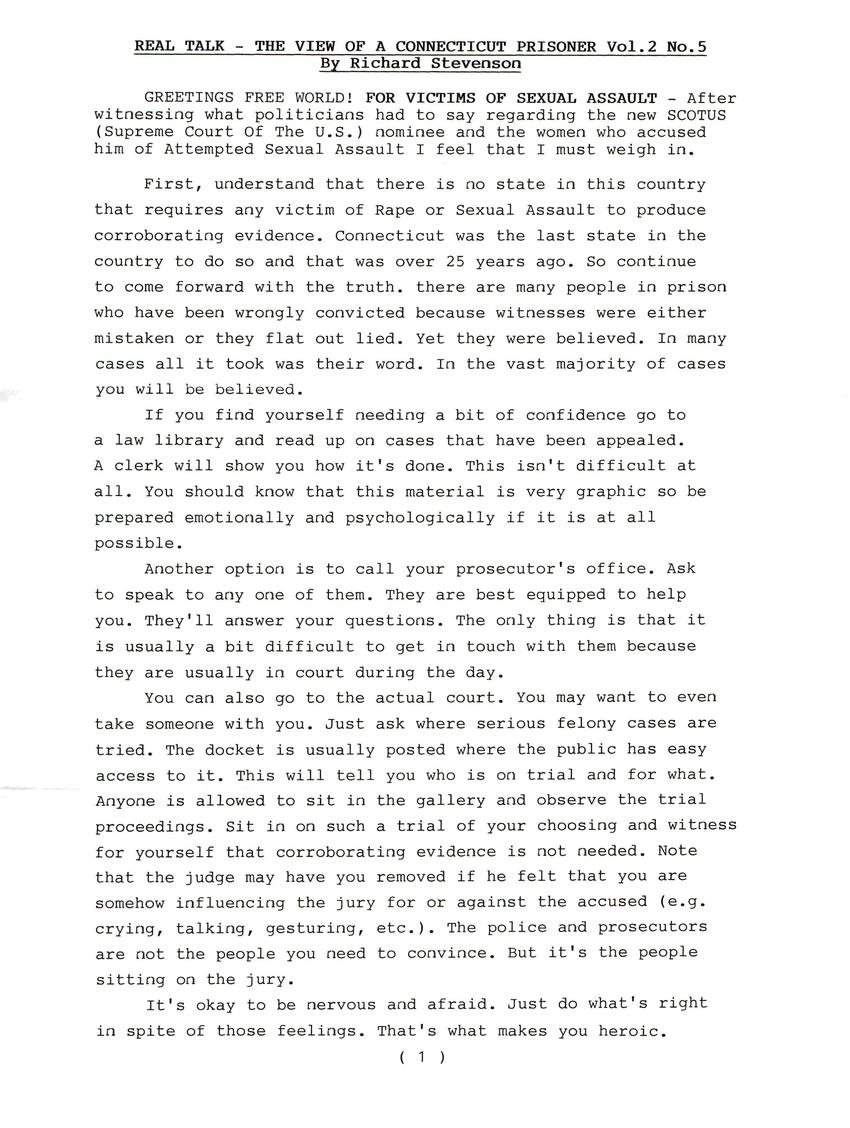 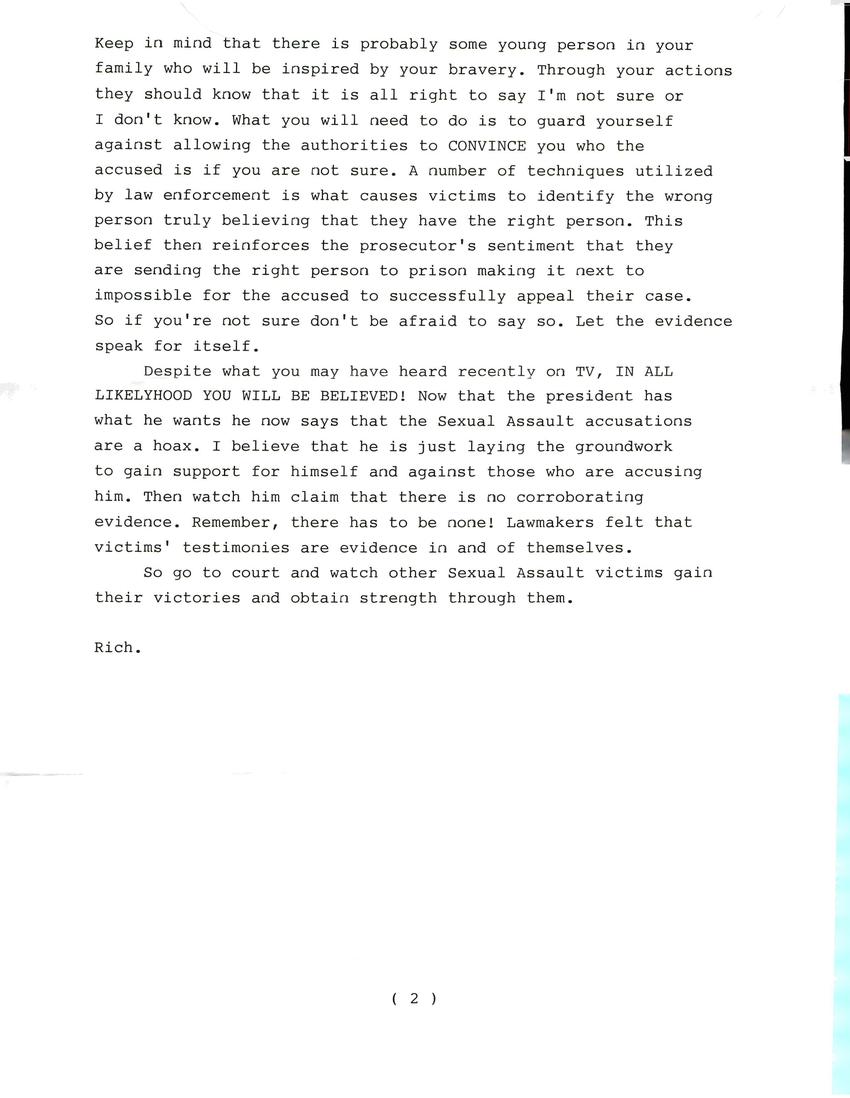 REAL TALK - THE VIEW OF A CONNECTICUT PRISONER Vol. 2, No. 5
By Richard Stevenson

GREETINGS, FREE WORLD! FOR VICTIMS OF SEXUAL ASSAULT: After witnessing what politicians had to say regarding the new SCOTUS (Supreme Court of the US) nominee and the women who accused him of attempted sexual assault, I feel I must weigh in.

First, understand that there is no state in this country that requires any victim of rape or sexual assault to produce corroborating evidence. Connecticut was the last state in the country to do so, and that was over 25 years ago. So continue to come forward with the truth. There are many people in prison who have been wrongly convicted because witnesses were either mistaken or flat out lied. Yet they were believed. In many cases, all it took was their word. In the vast majority of cases, you will be believed.

If you find yourself needing a bit of confidence, go to a law library and read up on cases that have been appealed. A clerk will show you how it's done. This isn't difficult at all. You should know that this material is very graphic so be prepared emotionally and psychologically, if it is at all possible.

Another option is to call your prosecutor's office. Ask to speak to any one of them. They are best equipped to help you. They'll answer your questions. The only thing is that it is usually a bit difficult to get in touch with them because they are usually in court during the day.

You can also go to the actual court. You may want to even take someone with you. Just ask where serious felony cases are tried. The docket is usually posted where the public has easy access to it. This will tell you who is on trial and for what. Anyone is allowed to sit in the gallery and observe the trial proceedings. Sit in on such a trial of your choosing and witness for yourself that corroborating evidence is not needed. Note that the judge may have you removed if he felt that you are somehow influencing the jury for or against the accused (i.e. crying, talking, gesturing, etc.). The police and prosecutors are not the people you need to convince. It's the people sitting on the jury.

It's okay to be nervous and afraid. Just do what's right in spite of those feelings. That's what makes you heroic.

Keep in mind that there is probably some young person in your family who will be inspired by your bravery. Through your actions, they should know that it is all right to say I'm not sure or I don't know. What you will need to do is to guard yourself against allowing the authorities to CONVINCE you who the accused is if you are not sure. A number of techniques utilized by law enforcement is what causes victims to identify the wrong person truly believing that they have the right person. This belief then reinforces the prosecutor's sentiment that they are sending the right person to prison, making it next to impossible for the accused to successfully appeal their case. So if you're not sure, don't be afraid to say so. Let the evidence speak for itself.

Despite what you may have heard recently on TV, IN ALL LIKELIHOOD, YOU WILL BE BELIEVED! Now that the president has what he wants, he now says that the sexual assault accusations are a hoax. I believe that he is just laying the groundwork to gain support for himself and against those who are accusing him. Then watch him claim that there is no corroborating evidence. Remember, there has to be none! Lawmakers felt that victims' testimonies are evidence in of themselves.

So go to court and watch other sexual assault victims gain their victories and obtain strength through them.