Transparency on your Second Term: Massachusetts Department of Correction 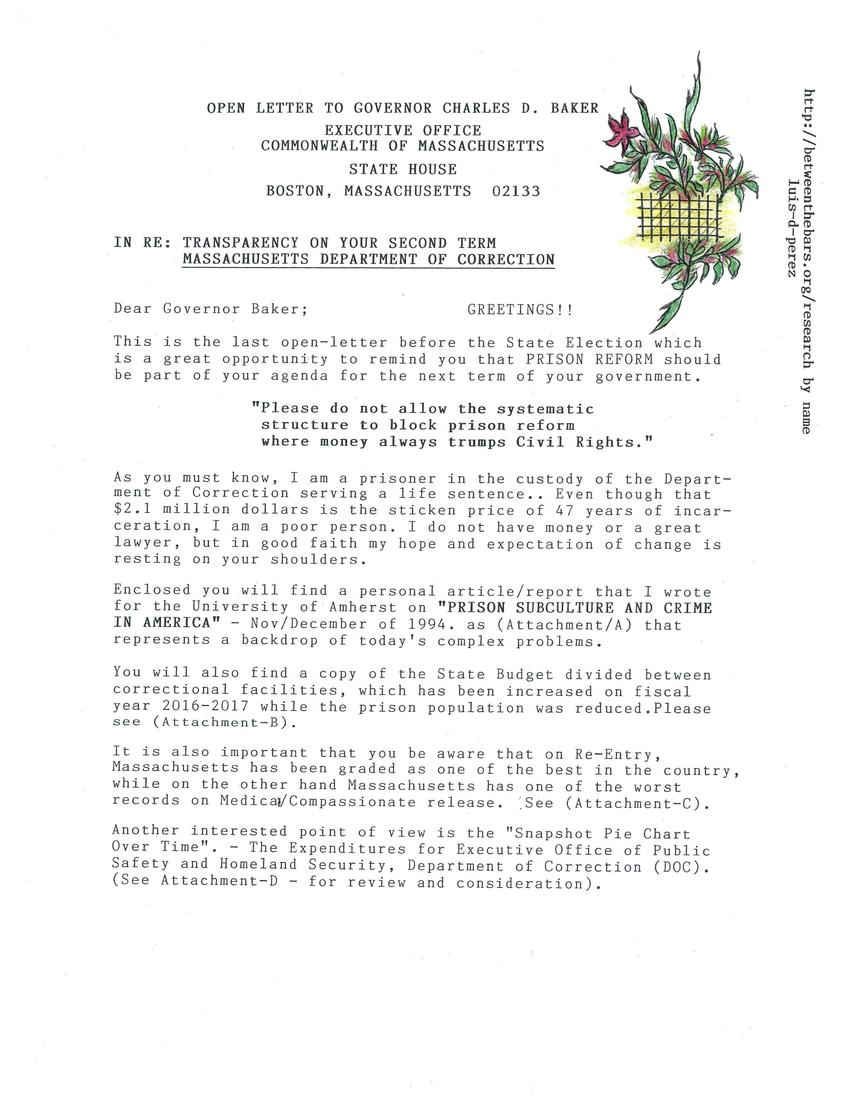 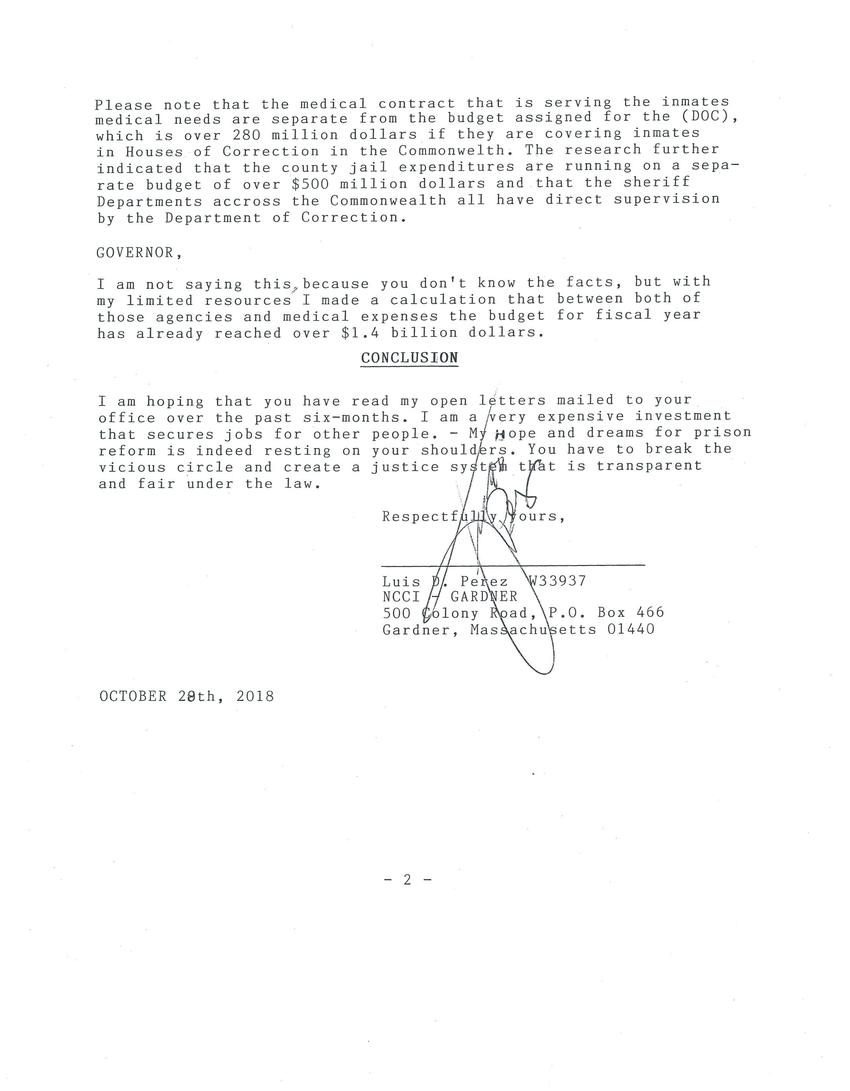 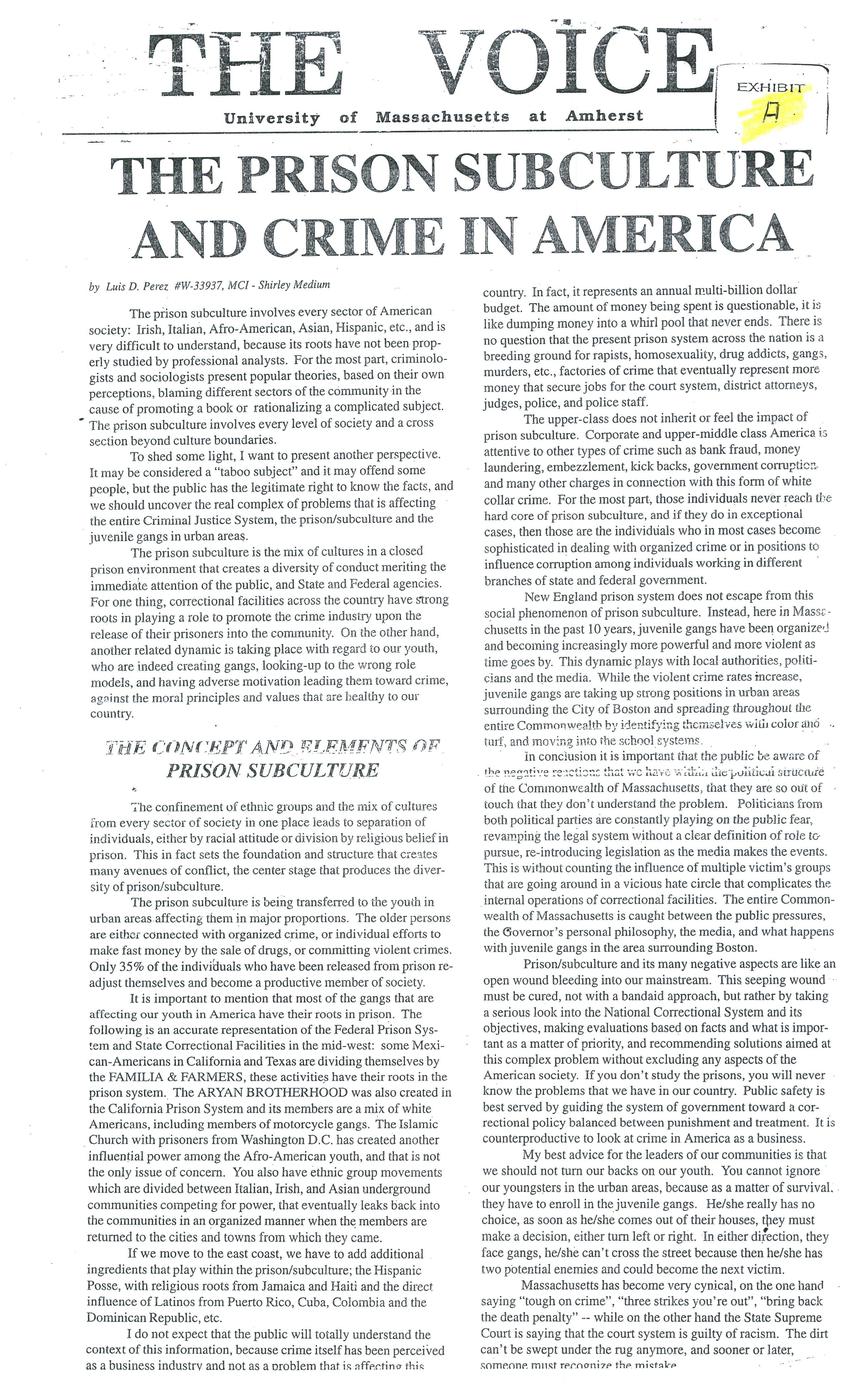 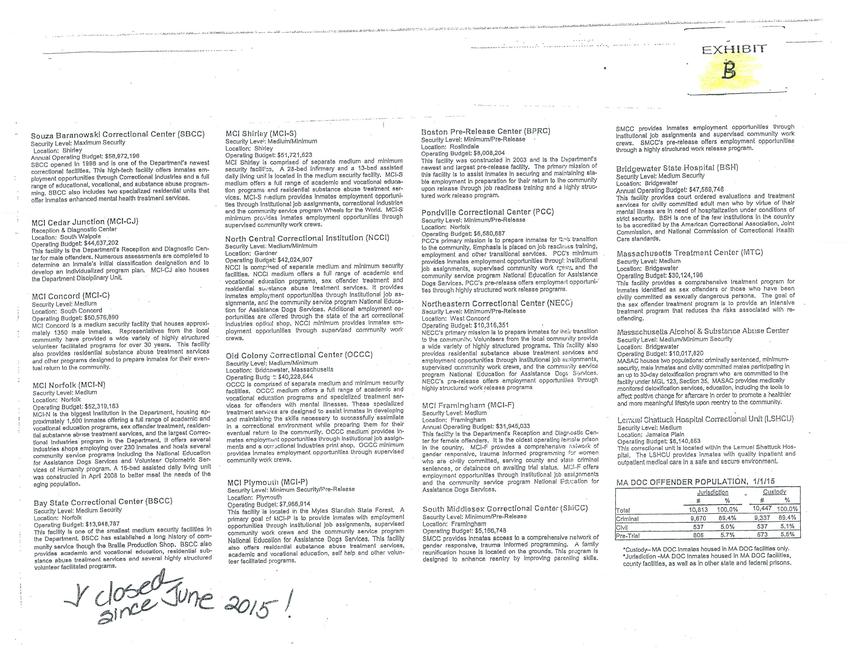 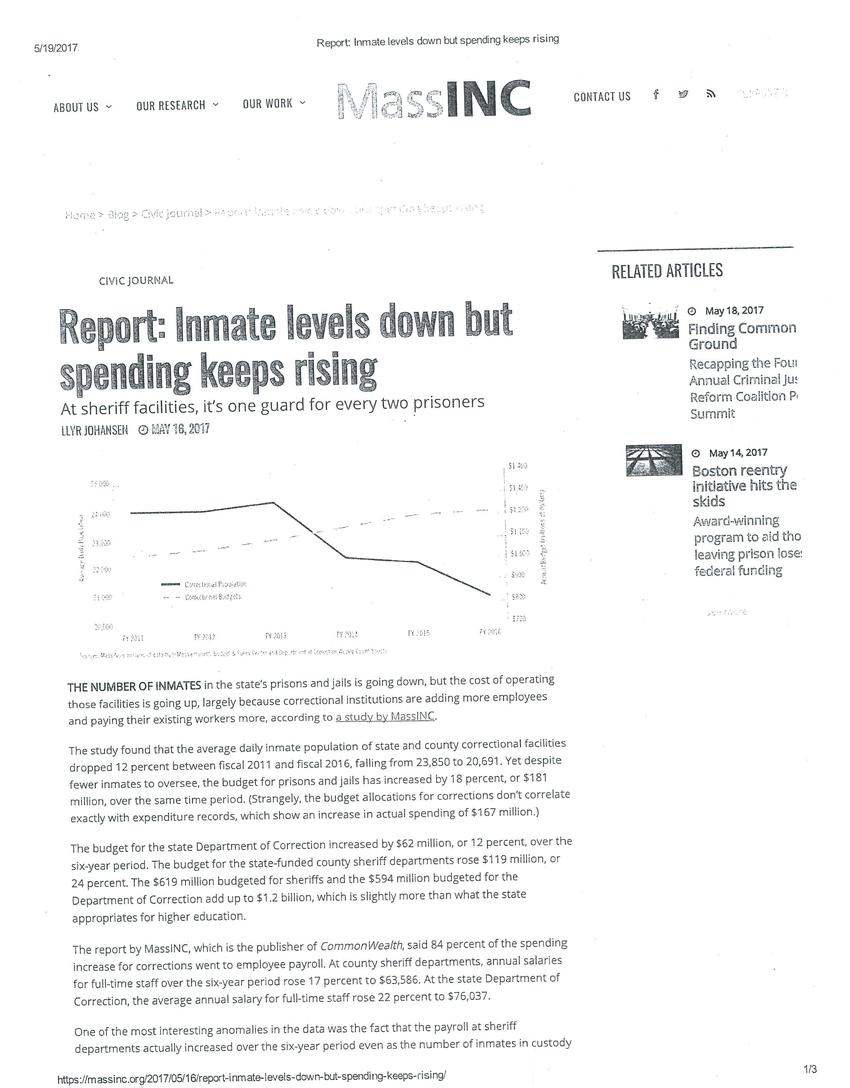 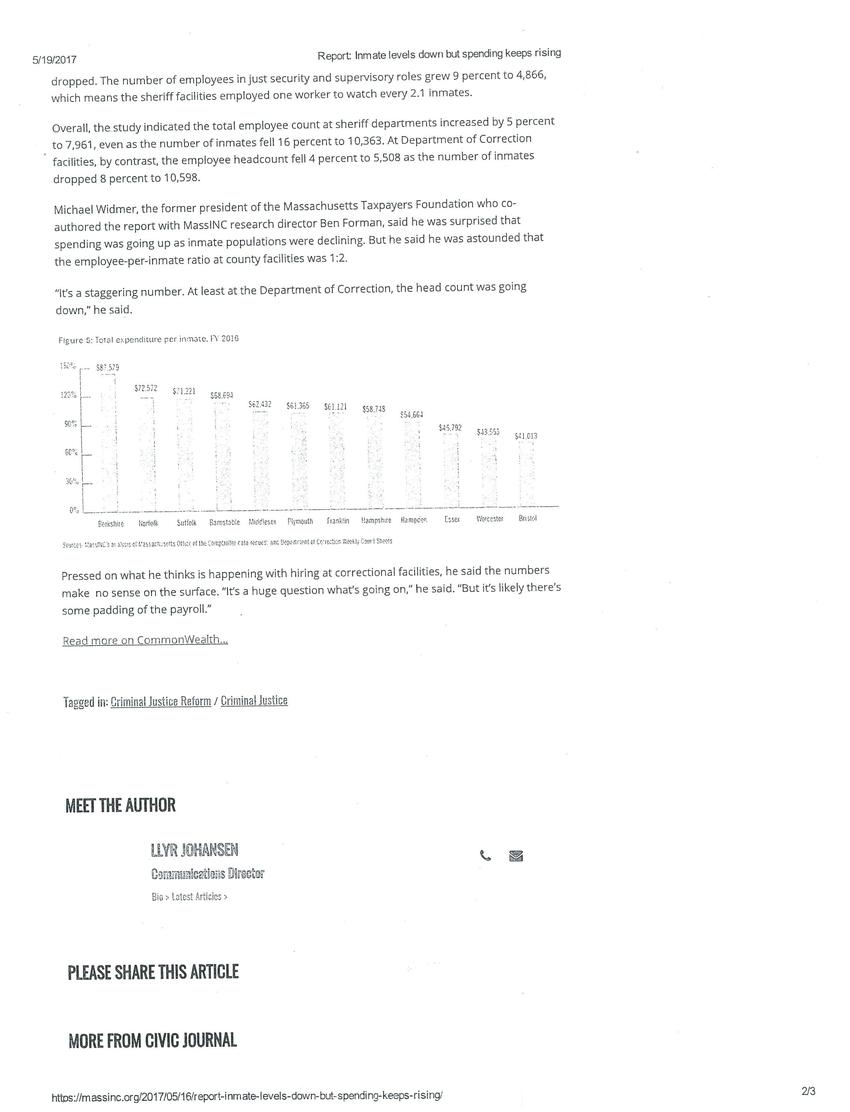 IN RE: TRANSPARENCY ON YOUR SECOND TERM
MASSACHUSETTS DEPARTMENT OF CORRECTION

This is the last open-letter before the State Election which is a great opportunity to remind you that PRISON REFORM should be part of your agenda for the next term of your government.

As you must know, I am a prisoner in the custody of the Department of Correction serving a life sentence.. Even though that $2.1 million dollars is the sticken price of 47 years of incarceration, I am a poor person. I do not have money or a great lawyer, but in good faith my hope and expectation of change is resting on your shoulders.

Enclosed you will find a personal article/report that I wrote for the University of Amherst on “PRISON SUBCULTURE AND CRIME IN AMERICA” - Nov/December of 1994. as (Attachment/A)that represents a backdrop of today’s complex problems.

You will also find a copy of the State Budget divided between correctional facilities, which has been increased on fiscal year 2016-2017 while the prison population was reduced. Please see (Attachment-B).

Another interested point of view is the “Snapshot Pie Chart Over Time”. - The Expenditures for Executive Office of Public Safety and Homeland Security, Department of Correction (DOC). (See Attachment-D - for review and consideration).

Please note that the medical contract that is serving the inmates medical needs are separate from the budget assigned for the (DOC), which is over 280 million dollars if they are covering inmates in Houses of Correction in the Commonwealth. The research further indicated that the county jail expenditures are running on a separate budget of over $500 million dollars and that the sheriff Departments across the Commonwealth all have direct supervision by the Department of Correction.

I am not saying this because you don’t know the facts, but with my limited resources I made a calculation that between both of those agencies and medical expenses the budget for fiscal year has already reached over $1.4 billion dollars.

I am hoping that you have read my open letters mailed to your office over the past six-months. I am a very expensive investment that secured jobs for other people. - My hope and dreams for prison reform is indeed resting on your shoulders. You have to break the vicious circle and create a justice system that is transparent and fair under the law.

EXHIBIT A
THE VOICE
University of Massachusetts at Amherst

THE PRISON SUBCULTURE AND CRIME IN AMERICA

The prison subculture involves every sector of American society: Irish, Italian, Afro-American, Asian, Hispanic, etc., and is very difficult to understand, because it’s roots have not been properly studied by professional analysts. For the most part, criminologists and sociologists present popular theories, based on their own perceptions, blaming different sectors of the community in the cause of promoting a book or rationalising a complicated subject. The prison subculture involves every level of society and a cross section beyond culture boundaries.
To shed some light, I want to present another perspective. It may be considered a “taboo subject” and it may offend some people; but the public has the legitimate right to know the facts, and we should uncover the real complex of problems that is affecting the entire Criminal Justice System, the prison/subculture and the juvenile gangs in urban area.
The prison subculture is the mix of cultures in a closed prison environment that creates a diversity of conduct meriting the immediate attention of the public, and State and Federal agencies. For one thing, correctional facilities across the country have strong roots in playing a role to promote the crime industry upon the release of their prisoners into the community. On the other hand, another related dynamic is taking place with regard to our youth, who are indeed creating gangs, looking-up to the wrong role models, and having adverse motivation leading them toward crime, against the moral principles and values that are healthy to our country.

THE CONCEPT AND ELEMENTS OF PRISON SUBCULTURE

The confinement of ethnic groups and the mix of cultures from every sector of society in one place leads to individuals, either by racial attitude or division by religious in prison.