It's Time to Cut the Prison Population In Wisconsin 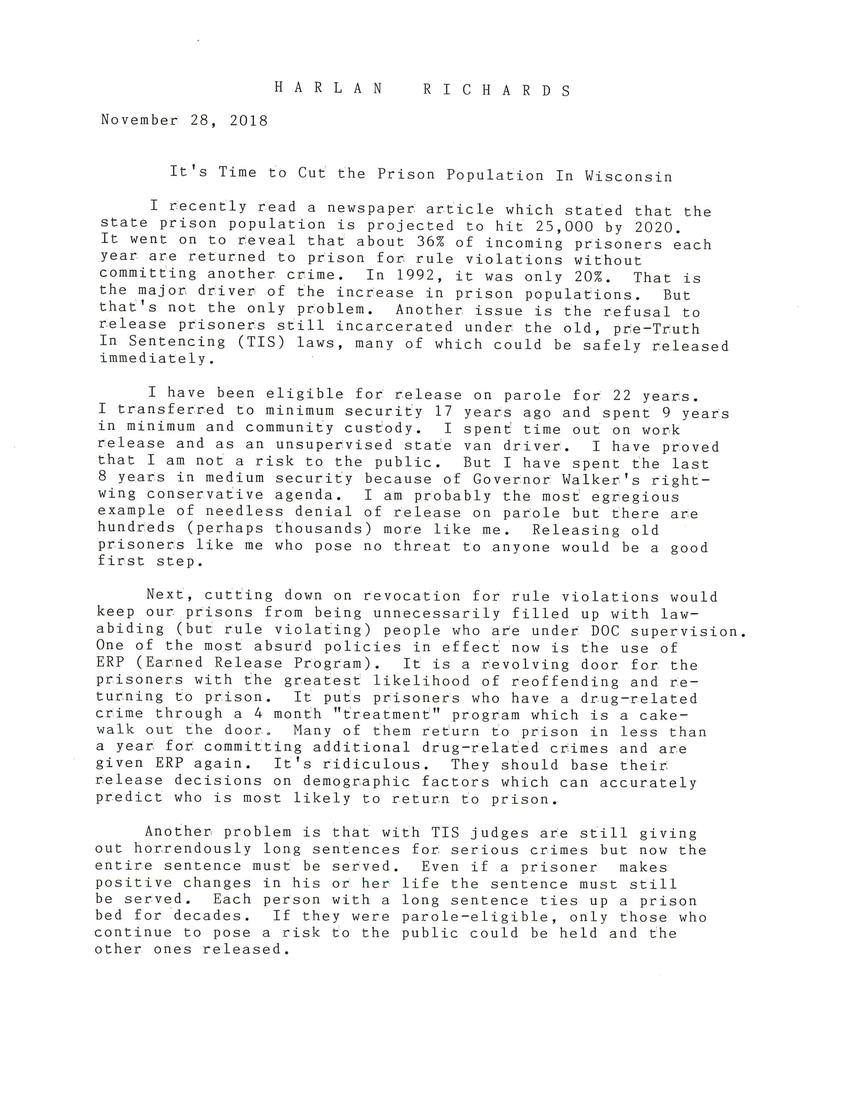 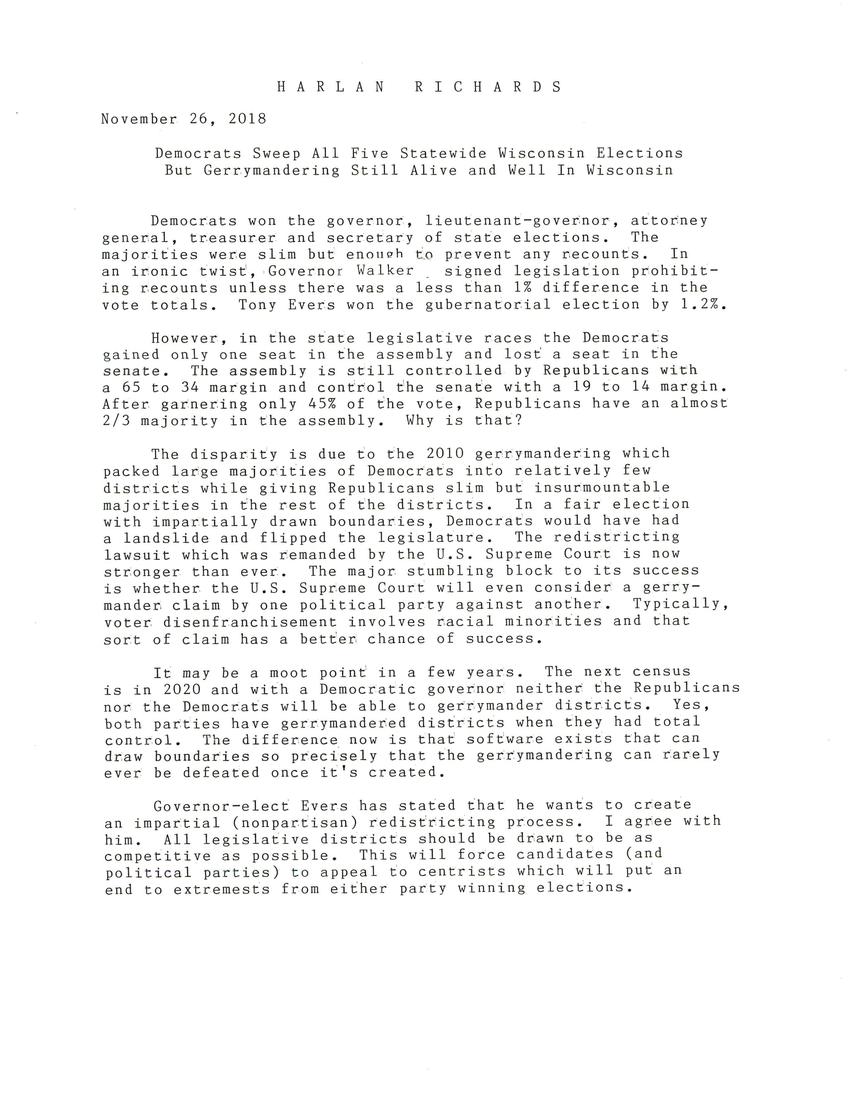 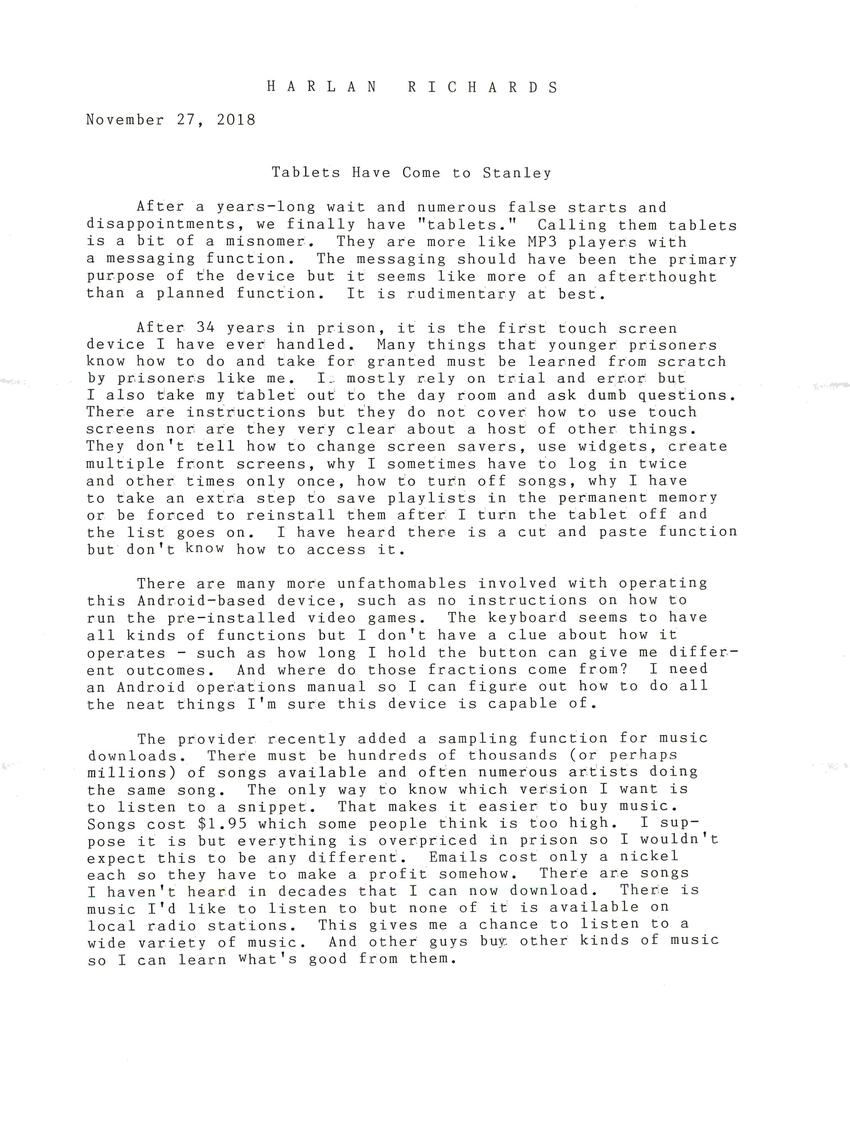 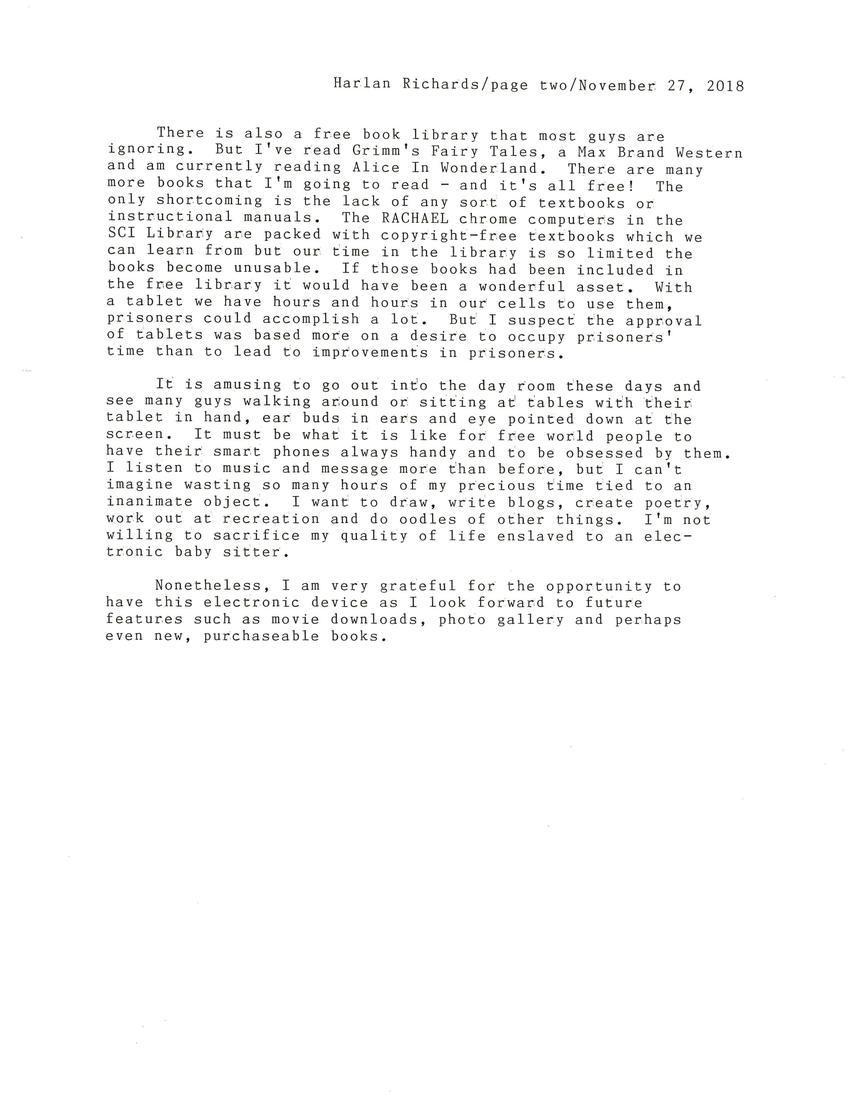 It's Time to Cut the Prison Population in Wisconsin

I recently read a newspaper article which stated that the state prison population is projected to hit 25,000 by 2020. It went on to reveal that about 36% of incoming prisoners each year are returned to prison for rule violations without committing another crime. In 1992, it was only 20%. That is the major driver of the increase in prison populations. But that's not the only problem. Another issue is the refusal to release prisoners still incarcerated under the old, pre-Truth In Sentencing (TIS) laws, many of which could be safely released immediately.

I have been eligible for release on parole for 22 years. I transferred to minimum security 17 years ago and spent 9 years in minimum and community custody. I spent time out on work release and as an unsupervised state van driver. I have proved that I am not a risk to the public. But I have spent the last 8 years in medium security because of Governor Walker's right-wing conservative agenda. I am probably the most egregious example of needless denial of release on parole but there are hundreds (perhaps thousands) more like me. Releasing old prisoners like me who pose no threat to anyone would be a good first step.

Next, cutting down on revocation for rule violations would keep our prisons from being unnecessarily filled up with law-abiding (but rule violating) people who are under DOC supervision. One of the most absurd policies in effect now is the use of ERP (Earned Release Program). It is a revolving door for the prisoners with the greatest likelihood of reoffending and returning to prison. It puts prisoners who have a drug-related crime through a 4 month "treatment" program which is a cakewalk out the door. Many of them return to prison in less than a year for committing additional drug-related crimes and are given ERP again. It's ridiculous. They should base their release decisions on demographic factors which can accurately predict who is most likely to return to prison.

Another problem is that with TIS judges are still giving out horrendously long sentences for serious crimes but now the entire sentence must be served. Even if a prisoner makes positive changes in his or her life the sentence must still be served. Each person with a long sentence ties up a prison bed for decades. If they were parole-eligible, only those who continue to pose a risk to the public could be held and the other ones released.

Democrats won the governor, lieutenant-governor, attorney general, treasurer and secretary of state elections. The majorities were slim but enough to prevent any recounts. In an ironic twist, Governor Walker signed legislation prohibiting recounts unless there was a less than 1% difference in the vote totals. Tony Evers won the gubernatorial election by 1.2%.

The disparity is due to the 2010 gerrymandering which packed large majorities of Democrats into relatively few districts while giving Republicans slim but insurmountable majorities in the rest of the districts. In a fair election with impartially drawn boundaries, Democrats would have had a landslide and flipped the legislature. The redistricting lawsuit which was remanded by the U.S. Supreme Court is now stronger than ever. The major stumbling block to its success is whether the U.S. Supreme Court will even consider a gerrymander claim by one political party against another. Typically, voter disenfranchisement involves racial minorities and that sort of claim has a better chance of success.

It may be a moot point in a few years. The next census is in 2020 and with a Democratic governor neither the Republicans nor the Democrats will be able to gerrymander districts. Yes, both parties have gerrymandered districts when they had total control. The difference now is that software exists that can draw boundaries so precisely that the gerrymandering can rarely ever be defeated once it's created.

Governor-elect Evers has stated that he wants to create an impartial (nonpartisan) redistricting process. I agree with him. All legislative districts should be drawn to be as competitive as possible. This will force candidates (and political parties) to appeal to centrists which will put an end to extremists from either party winning elections.

Tablets Have Come to Stanley

After a years-long wait and numerous false starts and disappointments, we finally have "tablets". Calling them tablets is a bit of a misnomer. They are more like MP3 players with a messaging function. The messaging should have been the primary purpose of the device but it seems like more of an afterthought than a planned function. It is rudimentary at best.

After 34 years in prison, it is the first touch screen device I have ever handled. Many things that younger prisoners know how to do and take for granted must be learned from scratch by prisoners like me. I mostly rely on trial and error but I also take my tablet out to the day room and ask dumb questions. There are instructions but they do not cover how to use touch screens nor are they very clear about a host of other things. They don't tell how to change screen savers, use widgets, create multiple front screens, why I sometimes have to log in twice and other times only once, how to turn off songs, why I have to take an extra step to save playlists in the permanent memory or be forced to reinstall them after I turn the tablet off and the list goes on. I have heard there is a cut and paste function but don't know how to access it.

There are many more unfathomables involved with operating this Android-based device, such as no instructions on how to run the pre-installed video games. The keyboard seems to have all kinds of functions but I don't have a clue about how it operates - such as how long I hold the button can give me different outcomes. And where do those fractions come from? I need an Android operations manual so I can figure out how to do all the neat things I'm sure this device is capable of.

The provider recently added a sampling function for music downloads. There must be hundreds of thousands (or perhaps millions) of songs available and often numerous artists doing the same song. The only way to know which version I want is to listen to a snippet. That makes it easier to buy music. Songs cost $1.95 which some people think is too high. I suppose it is but everything is overpriced in prison so I wouldn't expect this to be any different. Emails cost only a nickel each so they have to make a profit somehow. There are songs I haven't heard in decades that I can now download. There is music I'd like to listen to but none of it is available on local radio stations. This gives me a chance to listen to a wide variety of music. And other guys buy other kinds of music so I can learn what's good from them.

There is also a free book library that most guys are ignoring. But I've read Grimm's Fairy Tales, a Max Brand Western and am currently reading Alice In Wonderland. There are many more books that I'm going to read - and it's all free! The only shortcoming is the lack of any sort of textbooks or instructional manuals. The RACHAEL chrome computers in the SCI Library are packed with copyright-free textbooks which we can learn from but our time in the library is so limited the books become unusable. If those books had been included in the free library it would have been a wonderful asset. With a tablet we have hours and hours in our cells to use them, prisoners could accomplish a lot. But I suspect the approval of tablets was based more on a desire to occupy prisoners' time than to lead to improvements in prisoners.

It is amusing to go out into the day room these days and see many guys walking around or sitting at tables with their tablet in hand, ear buds in ears and eye pointed down at the screen. It must be what it is like for free world people to have their smart phones always handy and to be obsessed by them. I listen to music and message more than before, but I can't imagine wasting so many hours of my precious time tied to an inanimate object. I want to draw, write blogs, create poetry, work out at recreation and do oodles of other things. I'm not willing to sacrifice my quality of life enslaved to an electronic baby sitter.

Nonetheless, I am very grateful for the opportunity to have this electronic device as I look forward to future features such as movie downloads, photo gallery and perhaps even new, purchaseable books.

Thank you Harlan for your wonderful wordsmithing. My husband is also at Stanley and I print out your posts and mail them to him. I was getting worried about you as there had not been posts for several months.
(scanned reply – view as blog post)
uploaded Jan. 6, 2019.  Original (PDF) 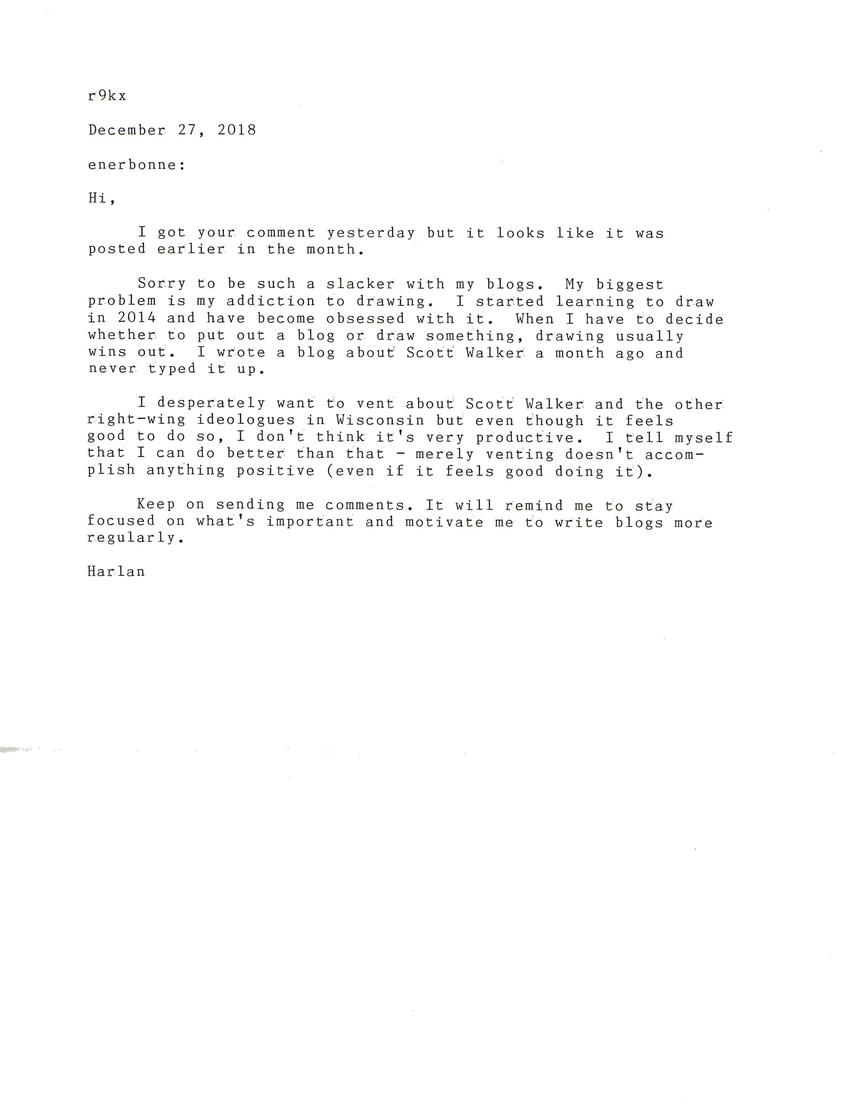 Oopps....I'm hopeful I accidentally sent my message to you rather than erasing it.

To finish what I hopefully included in my message--your talents as a writer are valuable to affecting change. You can be very productive just writing about your experiences at Stanley and suggesting changes in the Wisconsin prison system.

Thank you for sharing your talents.

P.S. Please advise as to whether you received the first part of my message. If not....I'll recreate and resend.
(scanned reply – view as blog post)
uploaded Feb. 17, 2019.  Original (PDF) 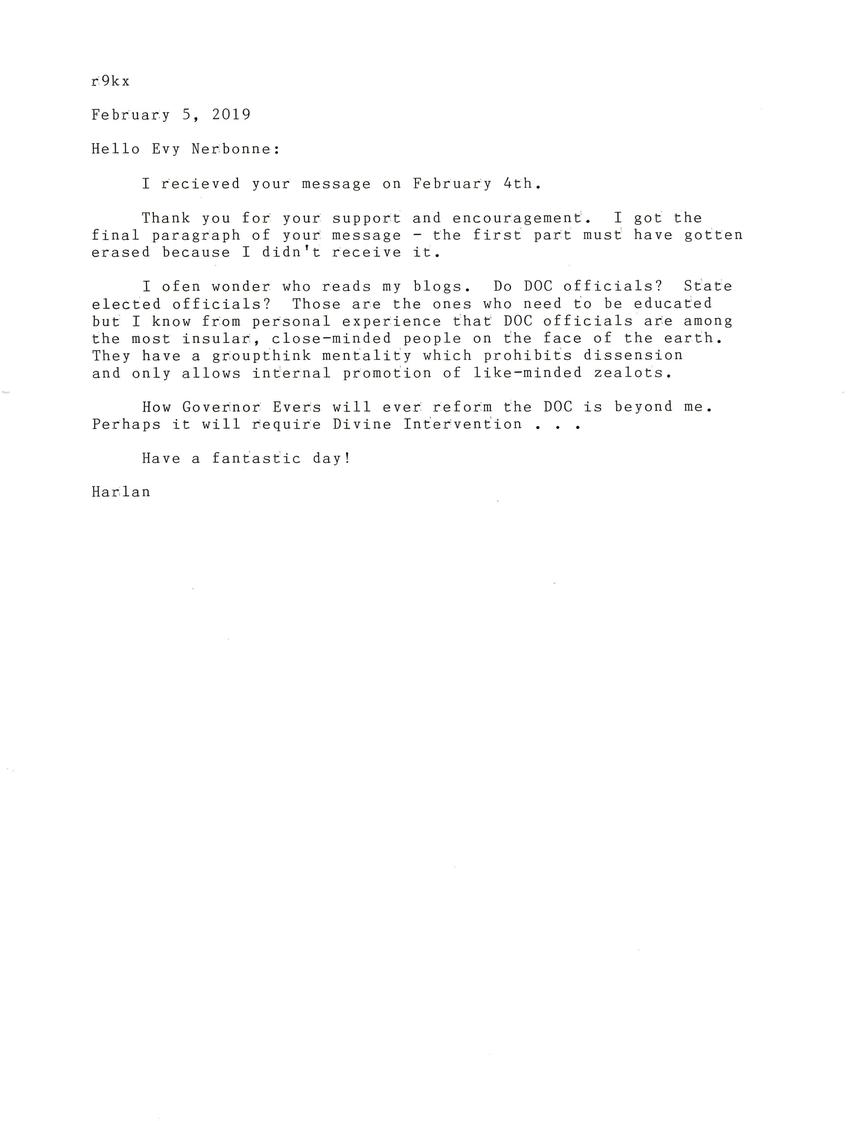