The New Johnny Mahaffey For 2019 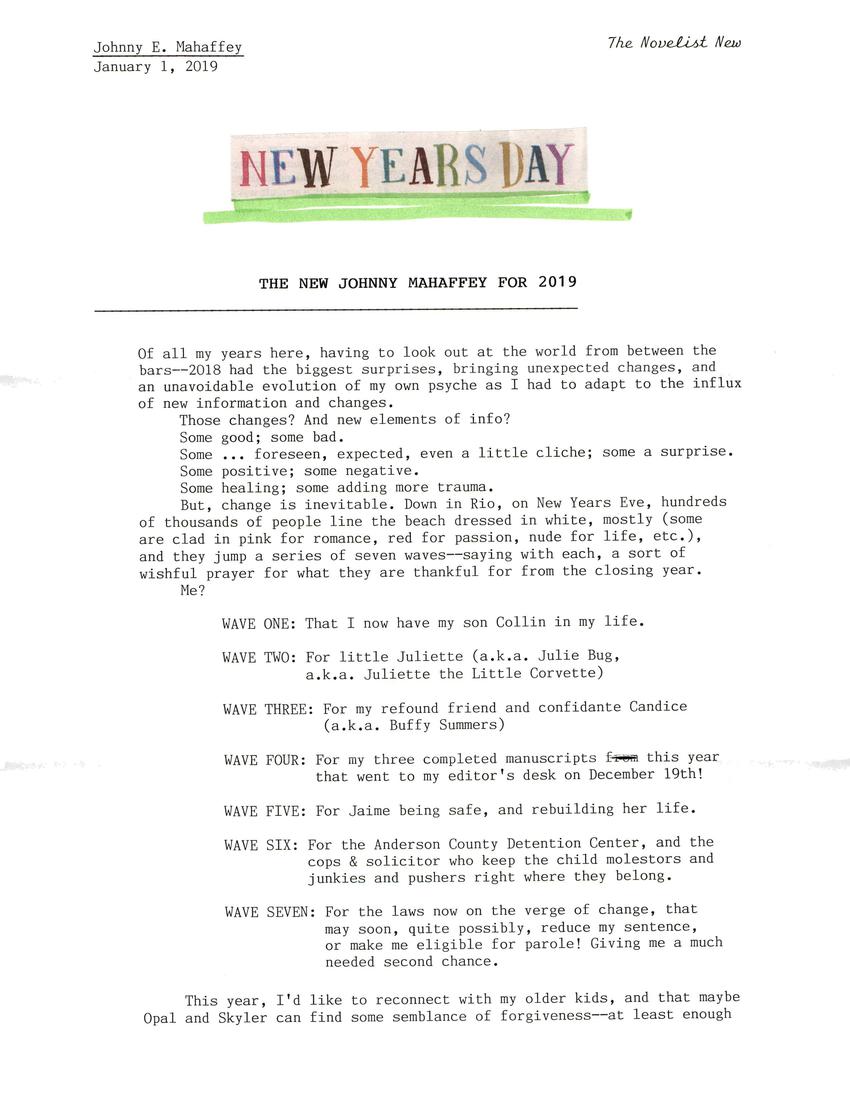 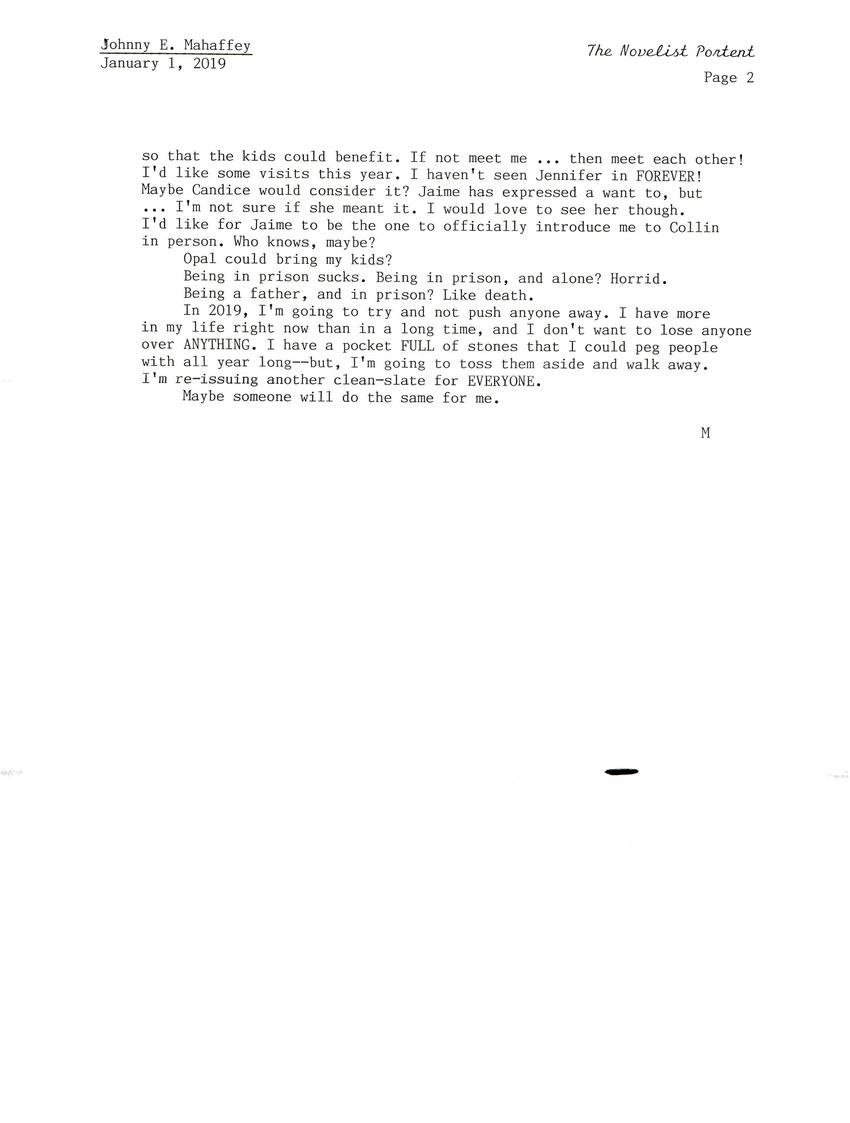 THE NEW JOHNNY MAHAFFEY FOR 2019

Of all my years here, having to look out at the world from between the bars -- 2018 had the biggest surprises, bringing unexpected changes, and an unavoidable evolution of my own psyche as I had to adapt to the influx of new information and changes.

Those changes? And new elements of info?

Some good; some bad.

Some ... foreseen, expected, even a little cliche; some a surprise.

Some positive; some negative.

Some healing; some adding more trauma.

But, change is inevitable. Down in Rio, on New Years Eve, hundreds of thousands of people line the beach dressed in white, mostly (some are clad in pink for romance, red for passion, nude for life, etc.), and they jump a series of seven waves -- saying with each, a sort of wishful prayer for what they are thankful for from the closing year.

WAVE ONE: That I now have my son Collin in my life.

WAVE THREE: For my refound friend and confidante Candice (a.k.a. Buffy Summers)

WAVE FOUR: For my three completed manuscripts from this year that went to my editor's desk on December 19th!

WAVE FIVE: For Jaime being safe, and rebuilding her life.

WAVE SIX: For the Anderson County Detention Center, and the cops & solicitor who keep the child molesters and junkies and pushers right where they belong.

WAVE SEVEN: For the laws now on the verge of change, that may soon, quite possibly, reduce my sentence, or make me eligible for parole! Giving me a much needed second chance.

This year, I'd like to reconnect with my older kids, and that maybe Opal and Skyler can find some semblance of forgiveness -- at least enough so that the kids could benefit. if not meet me ... then meet each other! I'd like some visits this year. I haven't seen Jennifer in FOREVER! Maybe Candice would consider it? Jaime has expressed a want to, but ... I'm not sure if she meant it. I would love to see her though. I'd like for Jaime to be the one to officially introduce me to Collin in person. Who knows, maybe?

Opal could bring my kids?

In 2019, I'm going to try and not push anyone away. I have more in my life right now than in a long time, and I don't want to lose anyone over ANYTHING. I have a pocket FULL of stones that I could peg people with all year long -- but, I'm going to toss them aside and walk away. I'm re-issuing another clean-slate for EVERYONE.

Maybe someone will do the same for me.

It sounds like you have come to a good place within yourself. Hold on to that feeling!
(scanned reply – view as blog post)
uploaded Feb. 25, 2019.  Original (PDF) 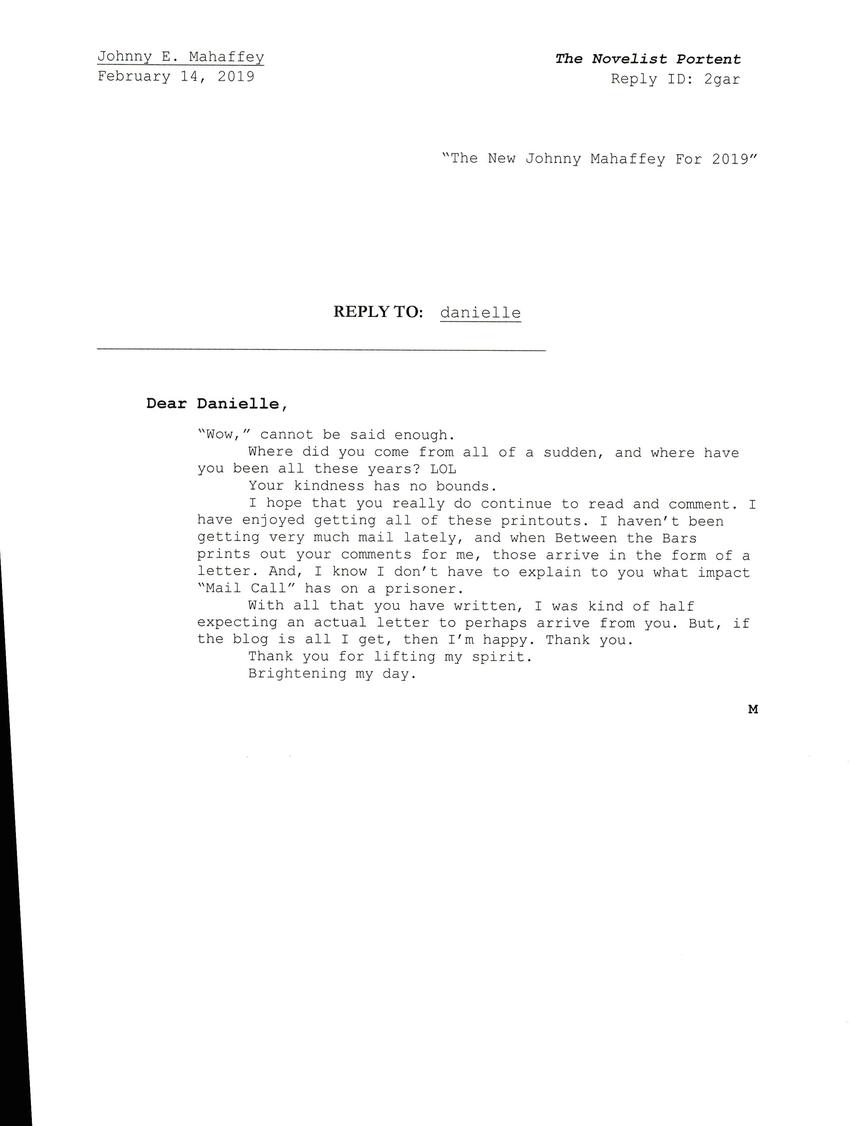