GTL The Great And Powerful 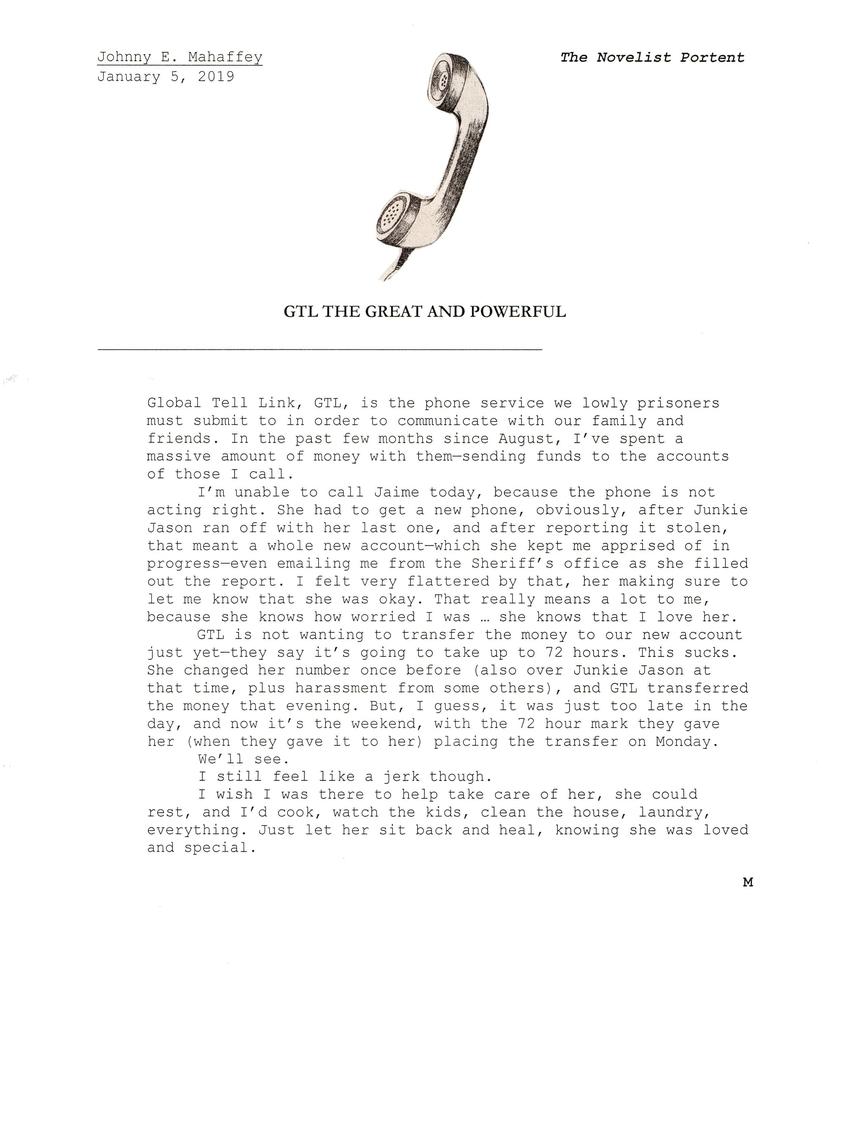 GTL: THE GREAT AND POWERFUL

Global Tell Link (GTL) is the phone service we lowly prisoners must submit to in order to communicate with our family and friends. In the past few months, since August, I've spent a massive amount of money with them, sending funds to the accounts of those I call.

I'm unable to call Jaime today because the phone is not acting right. She had to get a new phone, obviously, after Junkie Jason ran off with her last one. After reporting it stole, that meant a whole new account, which she kept me apprised of in progress, even emailing me from the sheriff's office as she filled out the report. I felt very flattered by that, her making sure to let me know that she was okay. That really means a lot to me because she knows how worried I was. She knows that I love her.

GTL is not wanting to transfer the money to our new account just yet. They say it's going to take up to 72 hours. This sucks. She changed her number once before (also over Junkie Jason, plus harassments from some others), and GTL transferred the money that evening. But I guess it was just too late in the day. Now it's the weekend with the 72 hour mark they gave her (when they gave it to her), placing the transfer to Monday. We'll see. I still feel like a jerk though.

I wish I was there to help take care of her. She could rest and I'd cook, watch the kids, clean the house, do the laundry—everything. Just let her sit back and heal, knowing she was loved and special.

I cannot believe you buy her brand of bullshit. You're so much smarter than this, Johnny.

She's hurting because she put herself in that situation. I can guarantee she provoked the entire thing. She needs to be locked in some type of facility so she can get the mental help she needs and the rehabilitation for her drug use.

Do what you know you need to do and leave it alone.

-C
Candice is right. Jaime shirly no good 4 u. U can have better. You speak japanese, use that. Lots of possibilities. Or American Candice. She care. I care......
I must apologize. Johnny was crying today because of Jaime blaming him for me. Now johnny not talk 2 me because of her. Why would anyone hurt him, i am sorry 2 Jaime 4 What I said. Please forgive him, so he forgive me. He is a good friend and i want 2 keep him. I will never talk of Jaime again.
I don't need to be taken care of. Many men have tried that, including you, and they all failed. By the way, no one calls him junkie Jason. I don't know where you get your information, but it's crap.
(scanned reply – view as blog post)
uploaded Feb. 25, 2019.  Original (PDF) 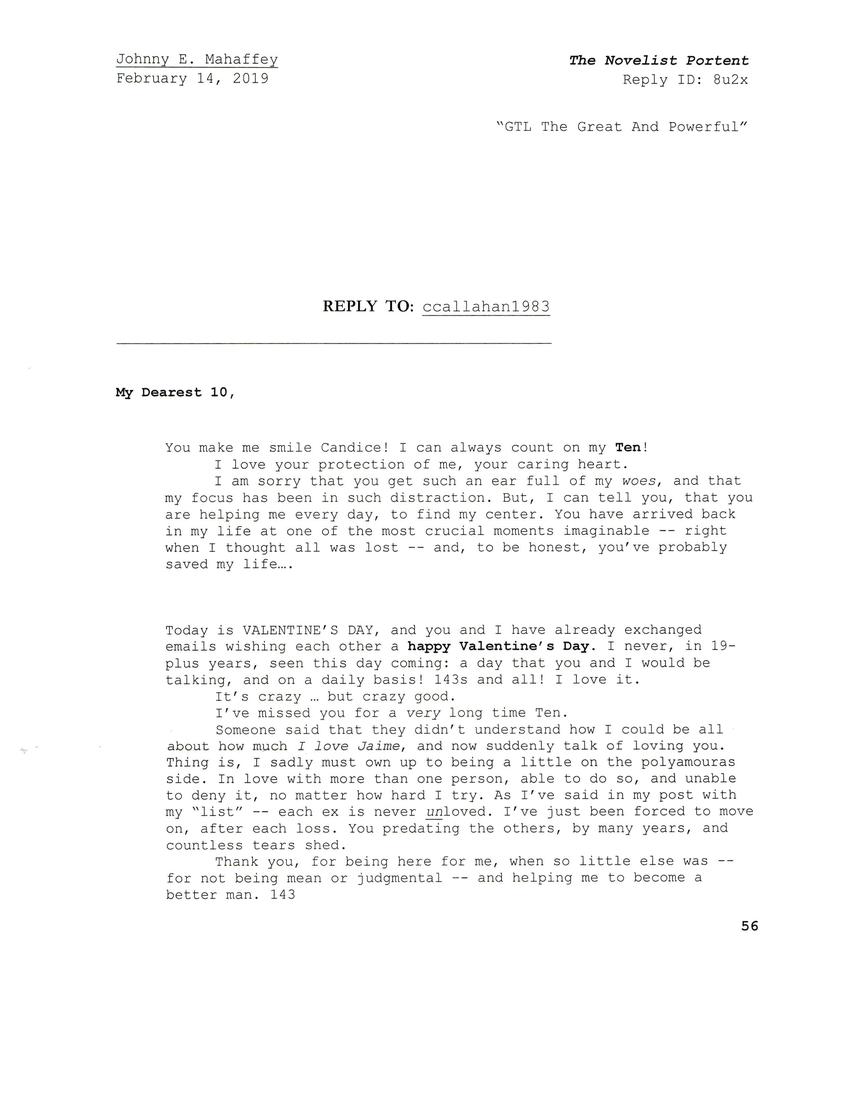 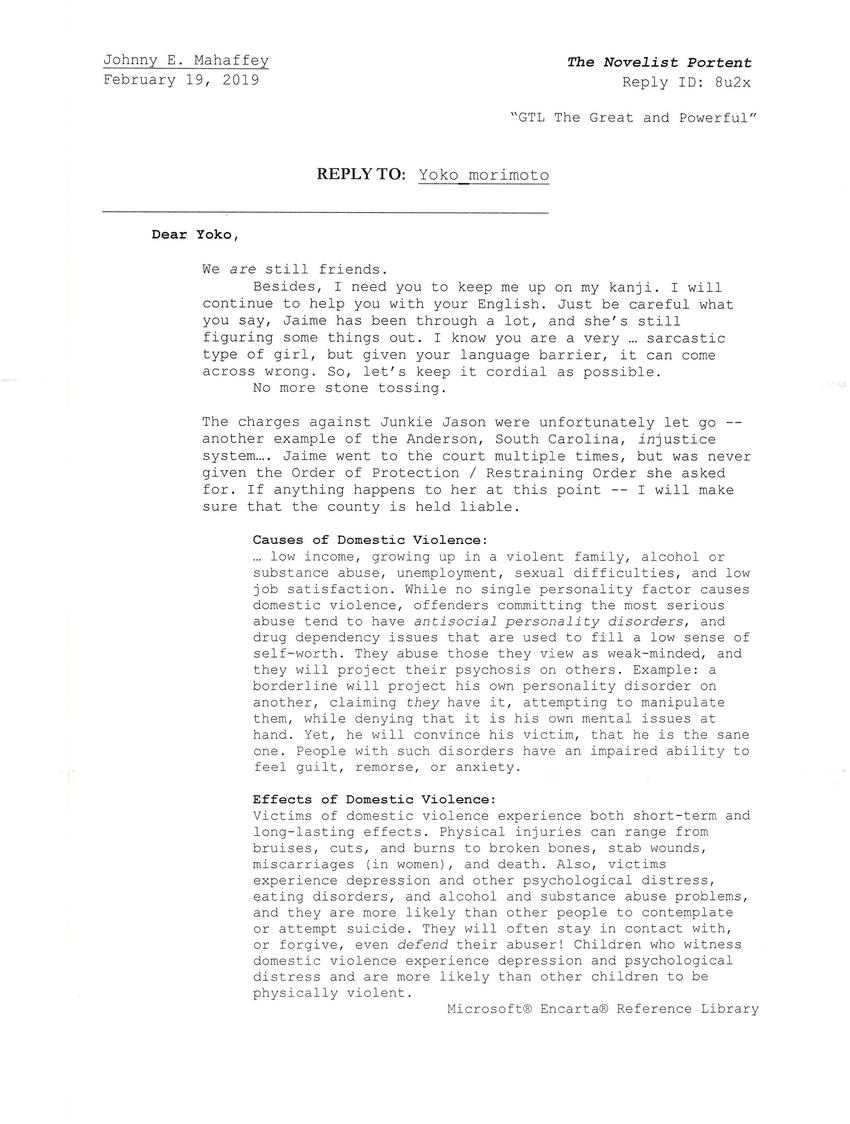