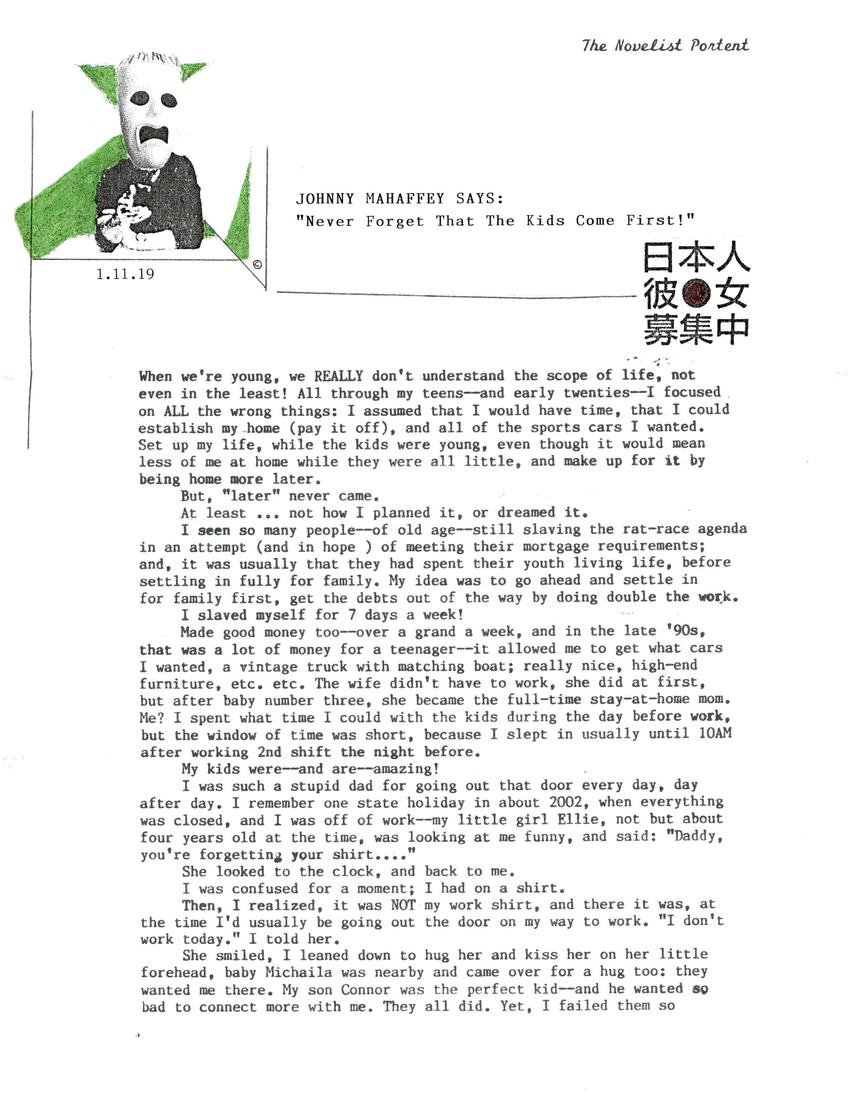 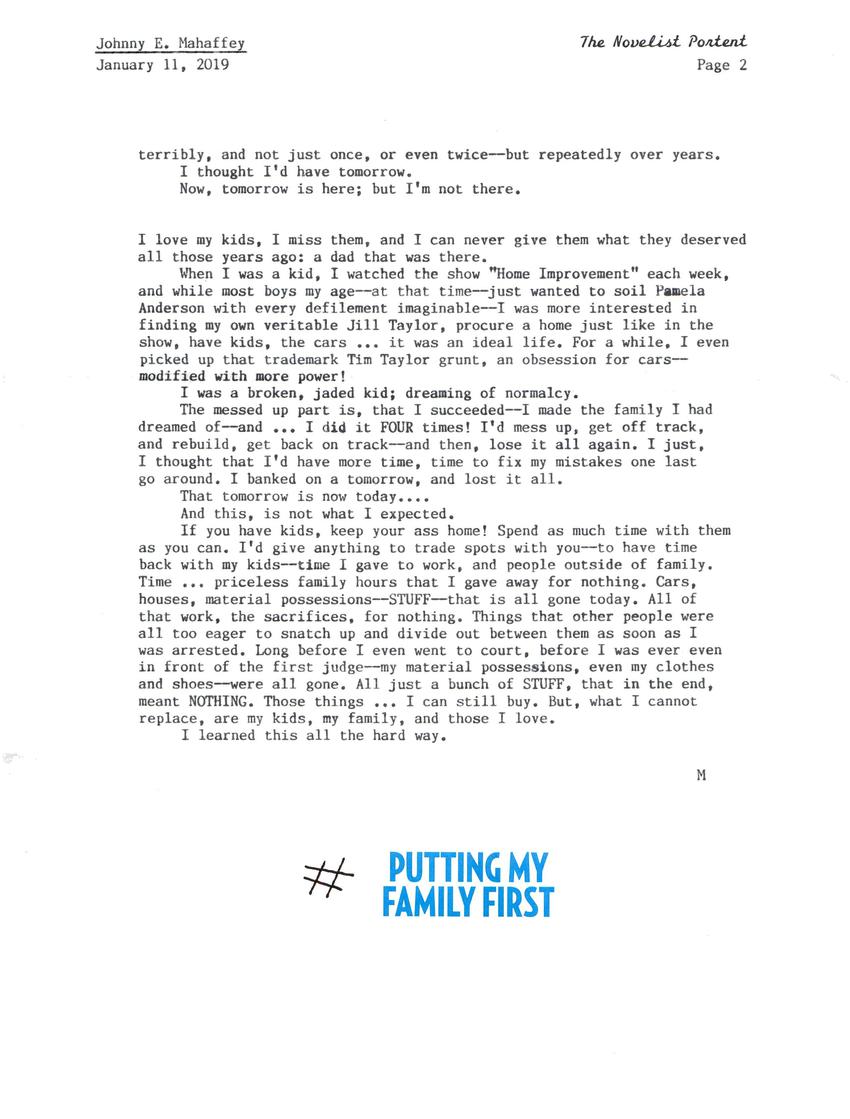 When we're young, we REALLY don't understand the scope of life, not even in the least! All through my teens--and early twenties--I focused on ALL the wrong things: I assumed that I would have time, that I could establish my home (pay it off), and all of the sports cars I wanted. Set up my life, while the kids were young, even though it would mean less of me at home while they were all little, and make up for it by being home more later.
But, "later" never came.
At least … not how I planned it, or dreamed it.
I seen so many people--or old age--still slaving the rat-race agenda in an attempt (and in hope) of meeting their mortgage requirements; and, it was usually that they had spent their youth living life, before settling in fully for family. My idea was to go ahead and settle in for family first, get the debts out of the way by doing double the work.
I slaved myself for 7 days a week!
Made good money too--over a grand a week, and in the late '90s, that was a lot of money for a teenager--it allowed me to get what cars I wanted, a vintage truck with matching boat; really nice, high-end furniture, etc. etc. The wife didn't have to work, she did at first, but after baby number three, she became the full-time stay-at-home mom. Me? I spent what time I could with the kids during the day before work, but the window of time was short, because I slept in usually until 10AM after working 2nd shift the night before.
My kids were--and are--amazing!
I was sure a stupid dad for going our that door every day, day after day. I remember one state holiday in about 2002, when everything was closed, and I was off of work--my little girl Ellie, not but about four years old at the time, was looking at me funny, and said: "Daddy, you're forgetting your shirt...."
She looked to the clock, and back to me.
I was confused for a moment; I had on a shirt.
Then, I realized, it was NOT my work shirt, and there it was, at the time I'd usually be going out the door on my way to work. "I don't work today." I told her.
She smiled, I leaned down to hug her and kiss her on her little forehead, baby Michaila was nearby and came over for a hug too: they wanted me there. My son Connor was the perfect kid--and he wanted so bad to connect more with me. They all did. Yet, I failed them so terribly, and not just once, or even twice--but repeatedly over years.
I thought I'd have tomorrow.
Now, tomorrow is here; but I'm not there.

I love my kids, I miss them, and I can never give them what they deserved all those years ago: a dad that was there.
When I was a kid, I watched the show "Home Improvement" each week, and while most boys my age--at that time--just wanted to soil Pamela Anderson with every defilement imaginable--I was more interested in finding my own veritable Jill Taylor, procure a home just like in the show, have kids, the cars .... it was an ideal life. For a while, I even picked up that trademark Tim Taylor grunt, an obsession for cars--modified with more power!
I was a broken, jaded kid; dreaming of normalcy.
The messed up part is, that I succeeded--I made the family I had dreamed of--and .... I did it FOUR times! I'd mess up, get off track, and rebuild, get back on track--and then, lose it all again. I just, I thought that I'd have more time, time to fix my mistakes one last go around. I banked on a tomorrow, and lost it all.
That tomorrow is now today....
And this, is not what I expected.
If you have kids, keep your ass home! Spend as much time with them as you can. I'd give anything to trade spots with you--to have time back with my kids--time I gave to work, and people outside of family. Time … priceless family house, that I gave away for nothing. Cars, houses, material possessions--STUFF--that is all gone today. All of that work, the sacrifices, for nothing. Things that other people were all too eager to snatch up and divide out between them as soon as I was arrested. Long before I even went to court, before I was ever even in front of the first judge--my material possessions, even my clothes and shoes--were all gone. All just a bunch of STUFF, that in the end, meant NOTHING. Those things … I can still buy. But, what I cannot replace, are my kids, my family, and those I love.
I learned this all the hard way.

Very true! It’s so easy to get caught up in things and forget what is most important. I lost a coworker last fall, she was only 37. Never married, no kids. Makes me so sad to think of what she missed, but at the same time she had a full life. I guess the larger lesson is to appreciate the life iou have, whatever it is and wherever you are because it can end so quickly.

Take care of yourself!
That was the biggest fight between us. I wanted you to spend more time with us. We loved and needed you. It made us feel like we weren’t important enough for you to love.
You know what Johnny? I'm really glad I never trash talked you to our son. He's so happy to have you in his life. I know a lot of women like to talk bad about their kids father in front of them. I never could have done that. He deserved the chance to know you. You're his dad.
(scanned reply – view as blog post)
uploaded Feb. 27, 2019.  Original (PDF) 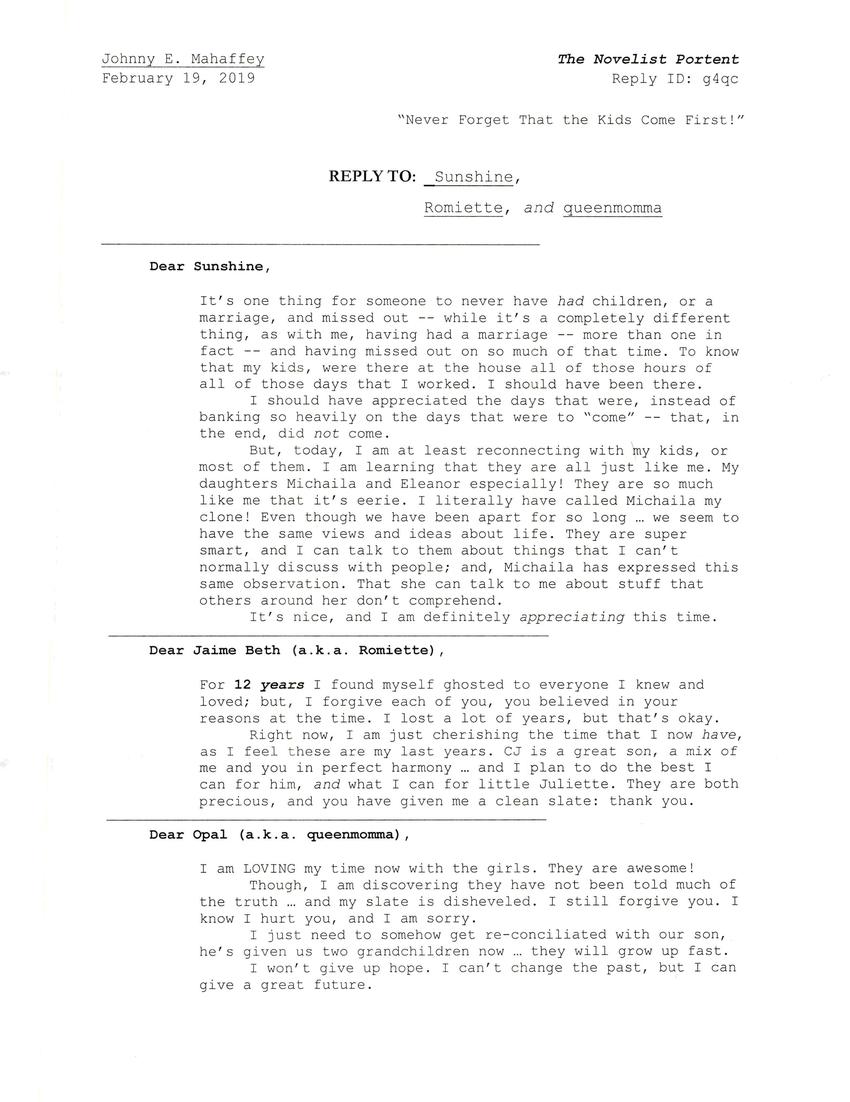