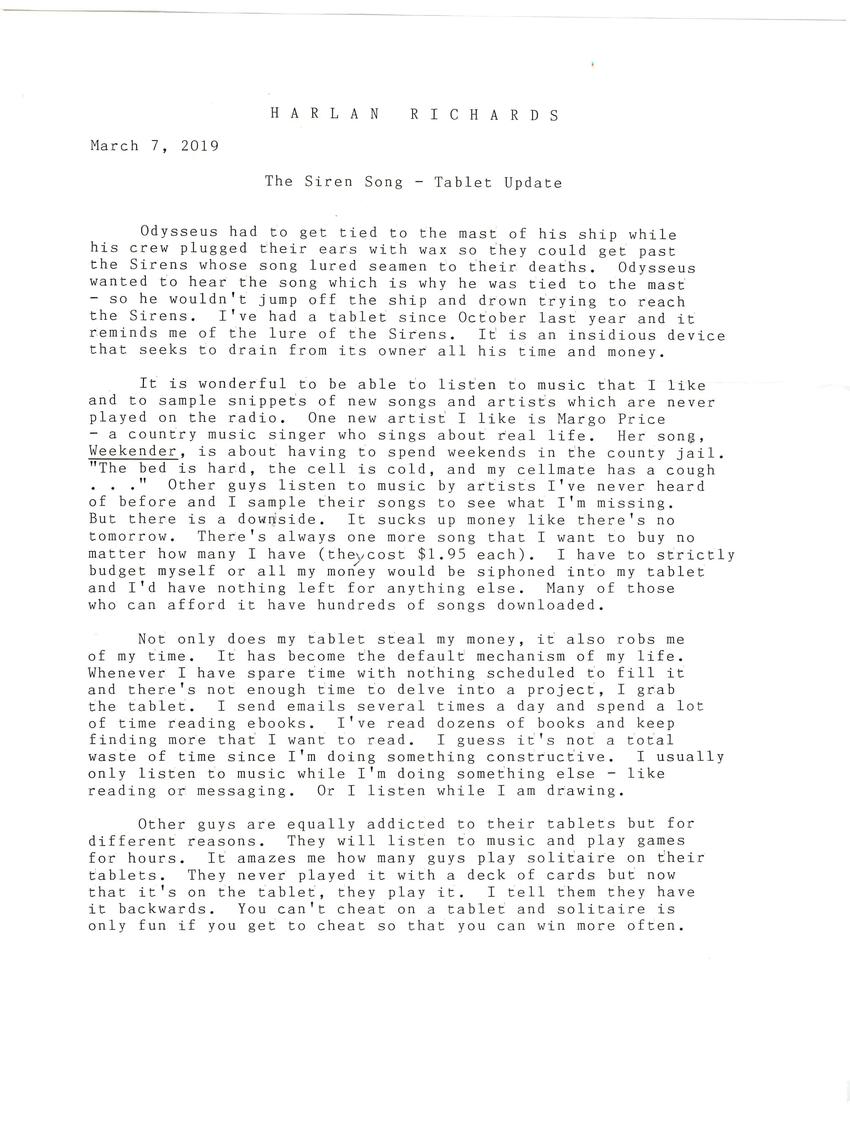 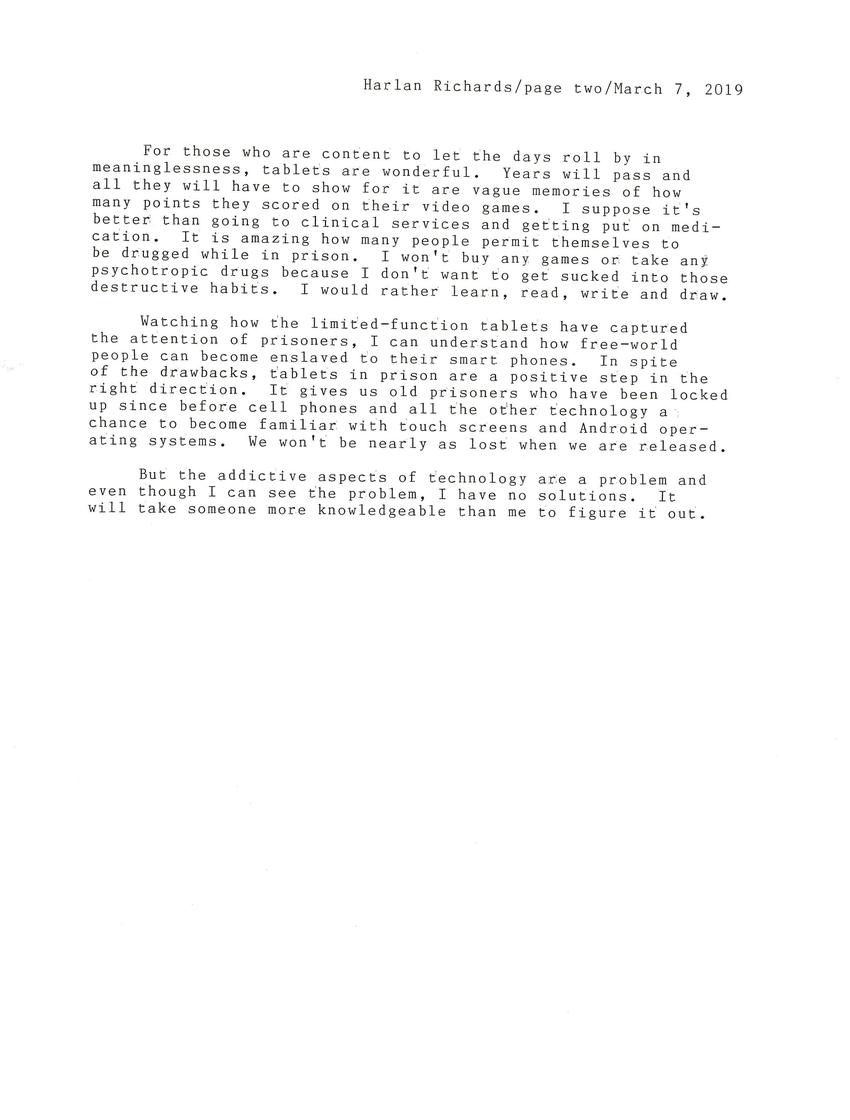 Odysseus had to get tied to the mast of his ship while his crew plugged their ears with wax so they could get past the Sirens whose song lured seamen to their deaths. Odysseus wanted to hear the song, which is why he was tied to the mast. So he wouldn't jump off the ship and drown trying to reach the Sirens. I've had a tablet since October last year, and it reminds me of the lure of the Sirens. It is an insidious device that seeks to drain from its owner all his time and money.

It is wonderful to be able to listen to music that I like and to sample snippets of new songs and artists which are never played on the radio. One new artist I like is Margo Price, a country music singer who sings about real life. Her song, "Weekender", is about having to spend weekends in county jail. "The bed is hard, the cell is cold, and my cellmate has a cough..." Other guys listen to music by artists I've never heard of before, and I sample their songs to see what I'm missing.

But there is a downside. It sucks up money like there's no tomorrow. There's always one more song that I want to buy no matter how many I have (they cost $1.95 each). I have to strictly budget myself or all my money would be siphoned into my tablet, and I'd have nothing left for anything else. Many of those who can afford it have hundreds of songs downloaded.

Not only does my tablet steal my money, it also robs me of my time. It has become the default mechanism of my life. Whenever I have spare time with nothing scheduled to fill it and there's not enough time to delve into a project, I grab the tablet. I send emails several times a day and spend a lot of time reading ebooks. I've read dozens of books and keep finding more that I want to read. I guess it's not a total waste of time since I'm doing something constructive. I usually only listen to music while I'm doing something else, like reading or messaging. Or I listen while I am drawing.

Other guys are usually addicted to their tablets but for different reasons. They will listen to music and play games for hours. It amazes me how many guys play solitaire on their tablets. They never played it with a deck of cards but now that it's on the tablet, they play it. I tell them they have it backwards. You can't cheat on a tablet, and solitaire is only fun if you get to cheat so that you can win more often.

For those who are content to let the days roll by in meaninglessness, tablets are wonderful. Years will pass, and all they will have to show for it are vague memories of how many points they scored on their video games. I suppose it's better than going to clinical services and getting on medication. It is amazing how many people permit themselves to be drugged while in prison. I won't buy any games or take any psychotropic drugs because I don't want to get sucked into those destructive habits. I would rather learn, read, write, and draw.

Watching how the limited function tablets have captured the attention of prisoners, I can understand how free world people can become enslaved to their smartphones. In spite of the drawbacks, tablets in prison are a positive step in the right direction. It gives us old prisoners, who have been locked up since before cellphones and all the other technology, a chance to become familiar with touchscreens and Android operating systems. We won't be nearly as lost as when we are released.

But the addictive aspects of technology are a problem, and even though I can see the problem, I have no solutions. It will take someone more knowledgeable than me to figure it out.

Thank you so much for starting to write again. Your insight is invaluable and hopefully Governor Evers will make good (or at least try) on his prison reform initiatives. I visited my husband at Stanley last week and he said that he'd heard encouraging news. The wife of one of his unit acquaintenances said she had written to Governor Evers and he'd actually answered her!

I am especially sensitive to your blog about the tablets. Internet addiction is why my husband shares the 100 Corrections Drive address with you. We're all aware of the horrible ramifications of addiction--friends here in Hudson just lost a son and brother to drug addiction. What a waste of a young life to a drug overdose. But we don't understand the potential harm of internet addiction and the technology is so new there isn't research to validate concerns.

My husband was/is addicted to internet pornography and it led to illegal behavior. Being warehoused at Stanley with no programs/counseling is most certainly not the right answer to the ever growing problem. He sees the same failure you've pointed out about the drug treatment program offered in the state corrections system. It's a revolving door and does very little (if anything) to help the people caught in the drug addiction web.

So welcome back to blogging--I didn't realize you are writing again so it look a while to get caught up. I'm printing out your blogs to send to my husband because he can certainly relate to your thinking. Then I'm writing a letter to Tony Evers...with copies to my state senator and assemblyman. 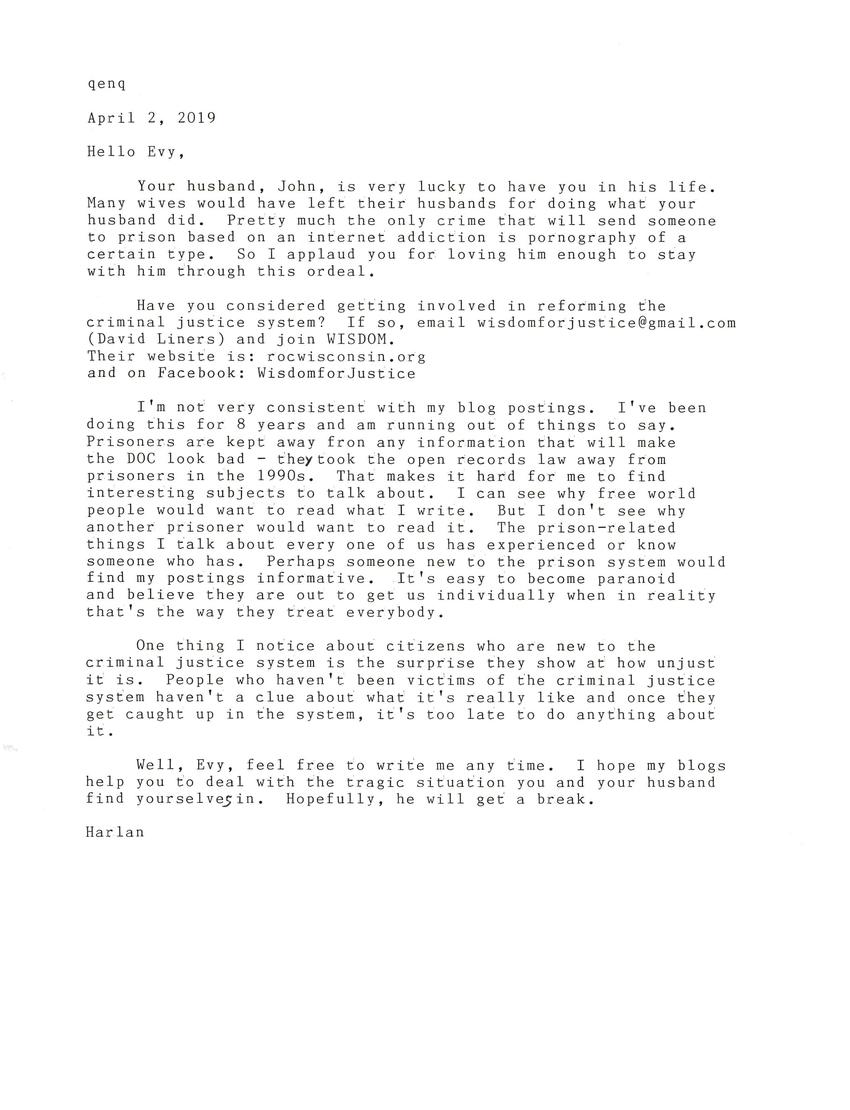 Thank you for writing back Harlan.

John said the weather was nice today so he enjoyed his walk to HSU. Hopefully you'll all fare better once spring arrives. John has medical issues too...plus right now his glasses bow is broken so half-ass taped together until another pair arrives from some vendor in California. Don't get me going about vendors and prison rules--went thru all kinds of challenges to order him another pair and hope they fit and are correct.

Thank you for writing to me. 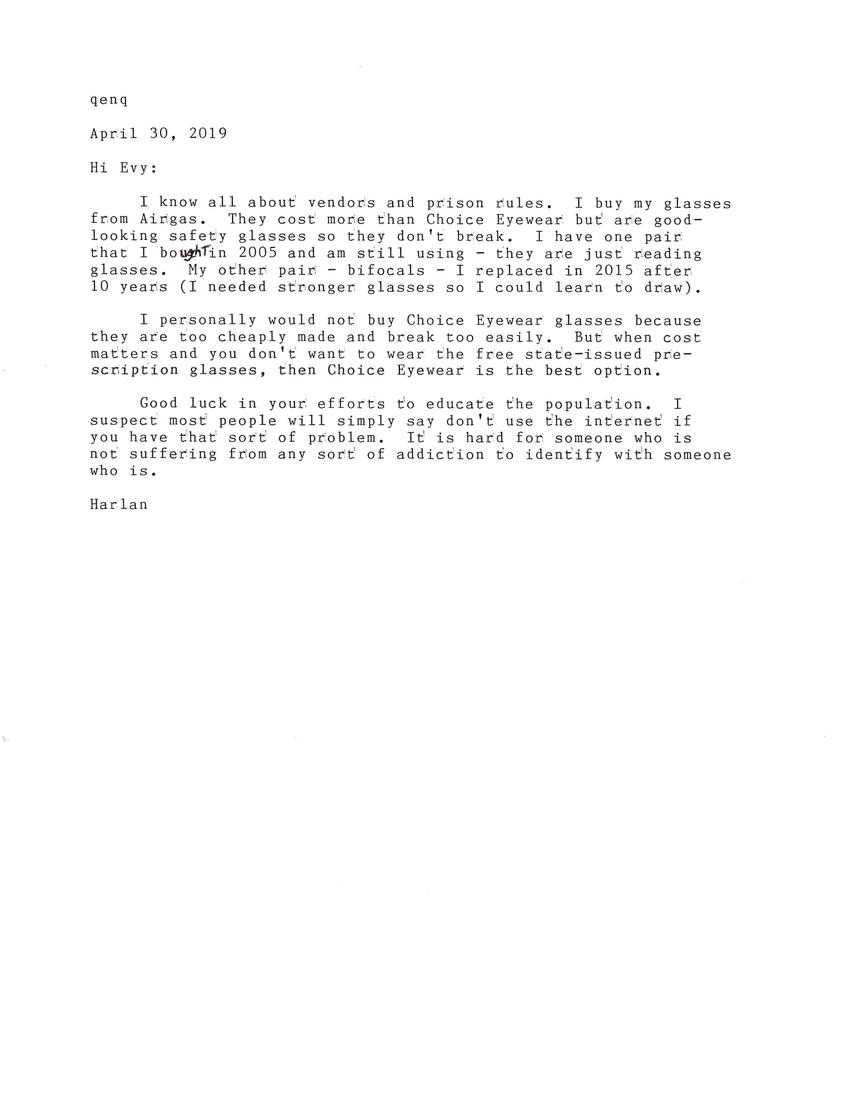