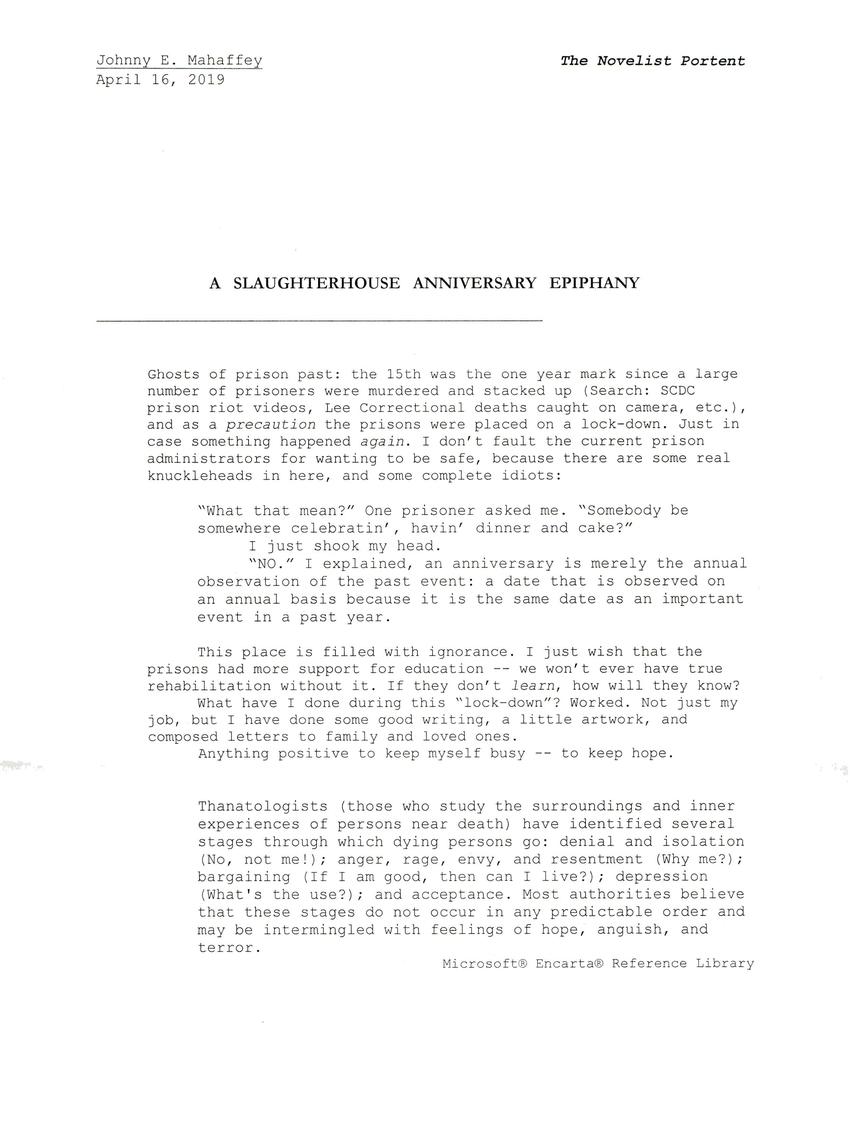 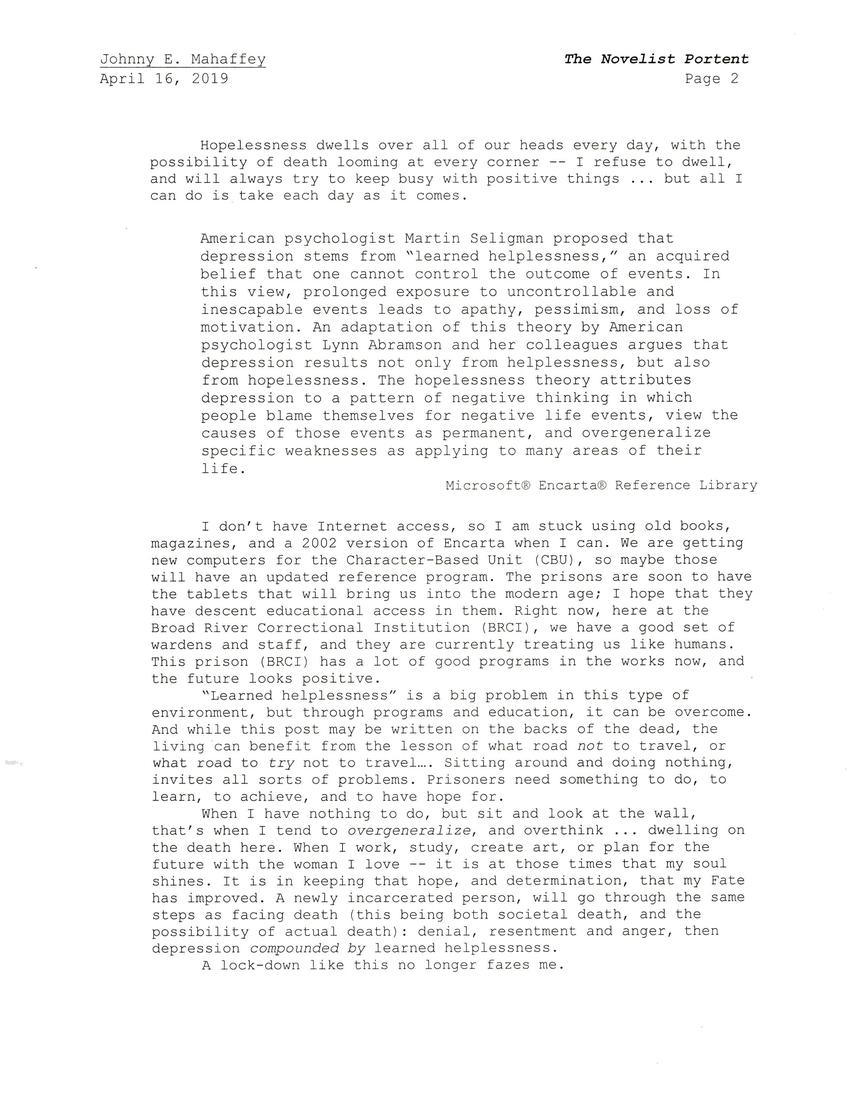 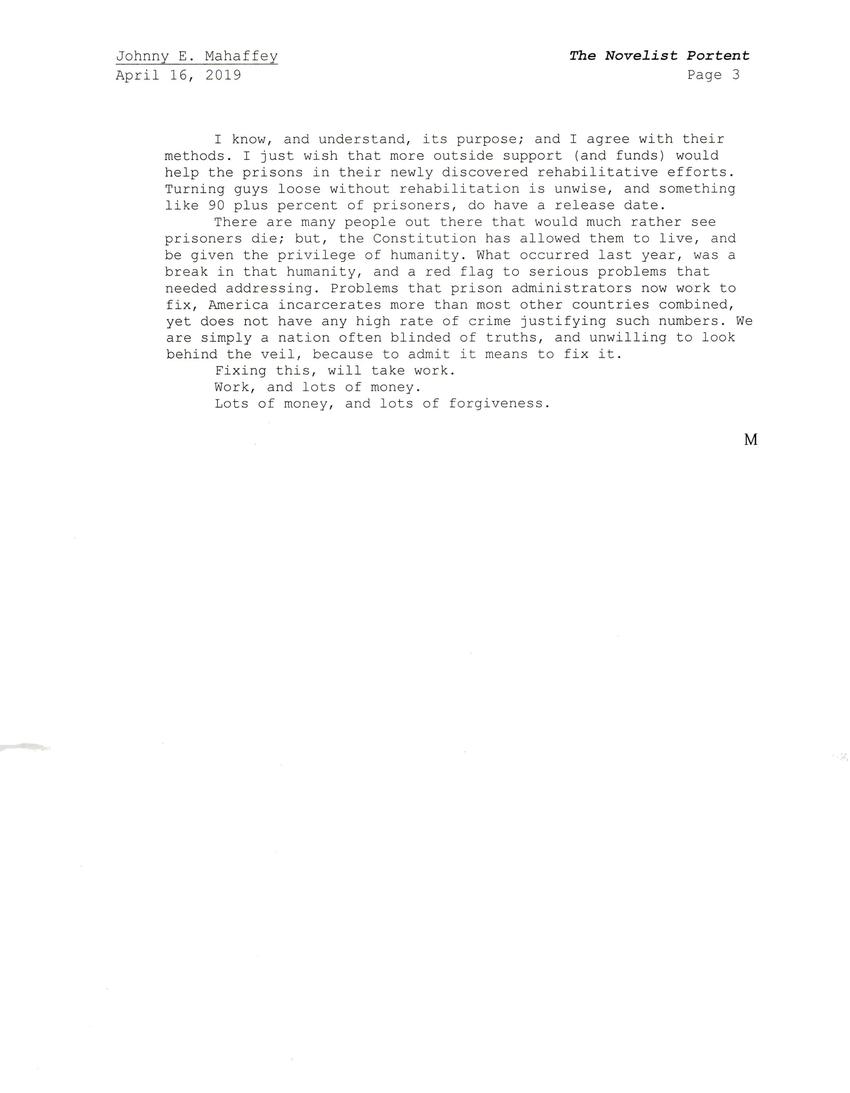 Ghosts of prison past: the 15th was the one year mark since a large number of prisoners were murdered and stacked up (Search: SCDC prison riot videos, Lee Correctional deaths caught on camera, etc.), and as a PRECAUTION the prisons were placed on lock-down. Just in case something happened AGAIN. I don't fault the current prison administrators for wanting to be safe, because there are some real knuckleheads in here, and some complete idiots:

"What that mean?" One prisoner asked me. "Somebody be somewhere celebratin', havin' dinner and cake?"

I just shook my head.

"NO." I explained, an anniversary is merely the annual observation of the past event: a date that is observed on an annual basis because it is the same date as an important event in a past year.

This place is filled with ignorance. I just wish that the prisons had more support for education -- we won't ever have true rehabilitation without it. If they don't LEARN, how will they know?

What have I done during this "lock-down"? Worked. Not just my job, but I have done some good writing, a little artwork, and composed letters to family and loved ones.
Anything positive to keep myself busy -- to keep hope.

Thanatologists (those who study the surroundings and inner experiences of persons near death) have identified several stages through which dying persons go: denial and isolation (No, not me!); anger, rage, envy, and resentment (Why me?); bargaining (If I am good, then can I live?); depression (What's the use?); and acceptance. Most authorities believe that these stages do not occur in any predictable order and may be intermingled with feelings of hope, anguish, and terror.

Hopelessness dwells over all of our heads every day, with the possibility of death looming at every corner -- I refuse to dwell, and will always try to keep busy with positive things … but all I can do is take each day as it comes.

American psychologist Martin Seligman proposed that depression stems from "learned helplessness", an acquired belief that one cannot control the outcome of events. In this view, prolonged exposure to uncontrollable and inescapable events leads to apathy, pessimism, and loss of motivation. An adaptation of this theory by American psychologist Lynn Abramson and her colleagues argues that depression results not only from helplessness, but also from hopelessness. The hopelessness theory attributes depression to a pattern of negative thinking in which people blame themselves for negative life events, view the causes of those events as permanent, and overgeneralize specific weaknesses as applying to many areas of their life.

I don't have Internet access, so I am stuck using old books, magazines, and a 2002 version of Encarta when I can. We are getting new computers for the Character-Based Unit (CBU), so maybe those will have an updated reference program. The prisons are soon to have the tablets that will bring us into the modern age; I hope that they have decent educational access in them. Right now, here at the Broad River Correctional Institution (BRCI), we have a good set of wardens and staff, and they are currently treating us like humans. This prison (BRCI) has a lot of good programs in the works now, and the future looks positive.

"Learned helplessness" is a big problem in this type of environment, but through programs and education, it can be overcome. And while this post may be written on the backs of the dead, the living can benefit from the lesson of what road NOT to travel, or what road to TRY not to travel... Sitting around and doing nothing, invites all sorts of problems. Prisoners need something to do, to learn, to achieve, and to have hope for.

When I have nothing to do, but sit and look at the wall, that's when I tend to OVERGENERALIZE, and overthink ... dwelling on the death here. When I work, study, create art, or plan for the future with the woman I love -- it is at those times that my soul shines. It is in keeping that hope, and determination, that my Fate has improved. A newly incarcerated person, will go through the same steps as facing death (this being both societal death, and the possibility of actual death): denial, resentment and anger, then depression COMPOUNDED BY learned helplessness.

I know, and understand, its purpose; and I agree with their methods. I just wish that more outside support (and funds) would help the prisons in their newly discovered rehabilitative efforts. Turning guys loose without rehabilitation is unwise, and something like 90 plus percent of prisoners, do have a release date.

There are many people out there that would much rather see prisoners die; but, the Constitution has allowed them to live, and be given the privilege of humanity. What occurred last year, was a break in that humanity, and a red flag to serious problems that needed addressing. Problems that prison administrators now work to fix, America incarcerates more than most other countries combined, yet does not have any high rate of crime justifying such numbers. We are simply a nation often blinded of truths, and unwilling to look behind the veil, because to admit it means to fix it.

Fixing this, will take work.

Work, and lots of money.

Lots of money, and lots of forgiveness.

Thank you. It's really appalling that the system has consistently refused the basic dignity of a meaning to life for incarcerated people, including education. People will argue that the system is meant to make people contemplate their lives, but it really is not true, and just seems to show the ignorance that almost everyone in america takes for granted.

You and many, many others in the united states are the exact people who need forgiveness, as you say, the most.