Real Talk - The View Of A Connecticut Prisoner Vol. 2 No 7 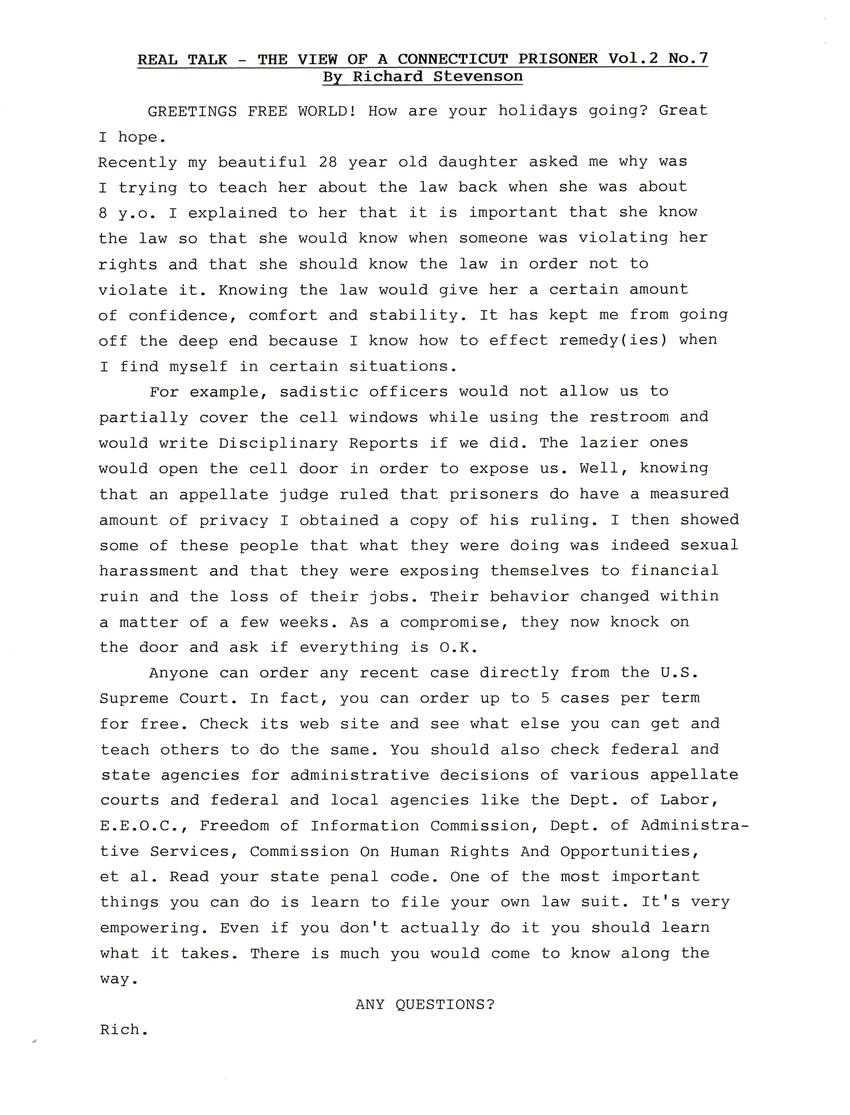 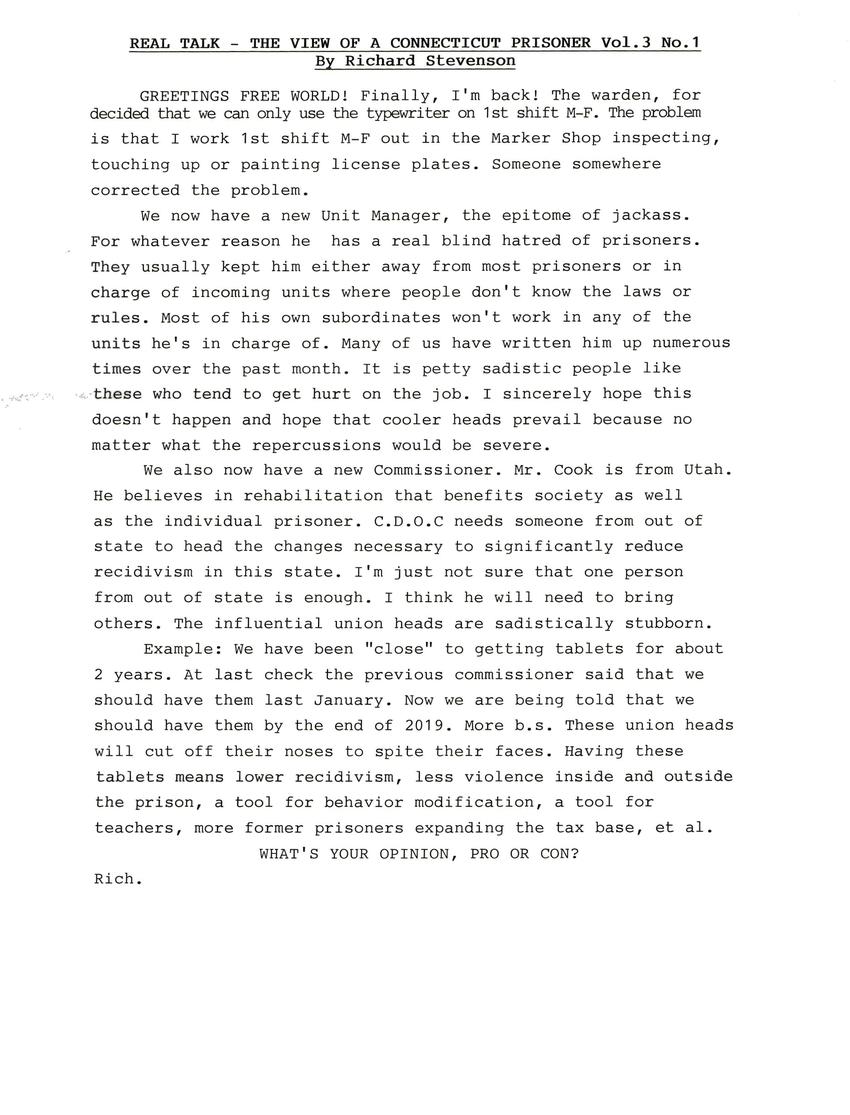 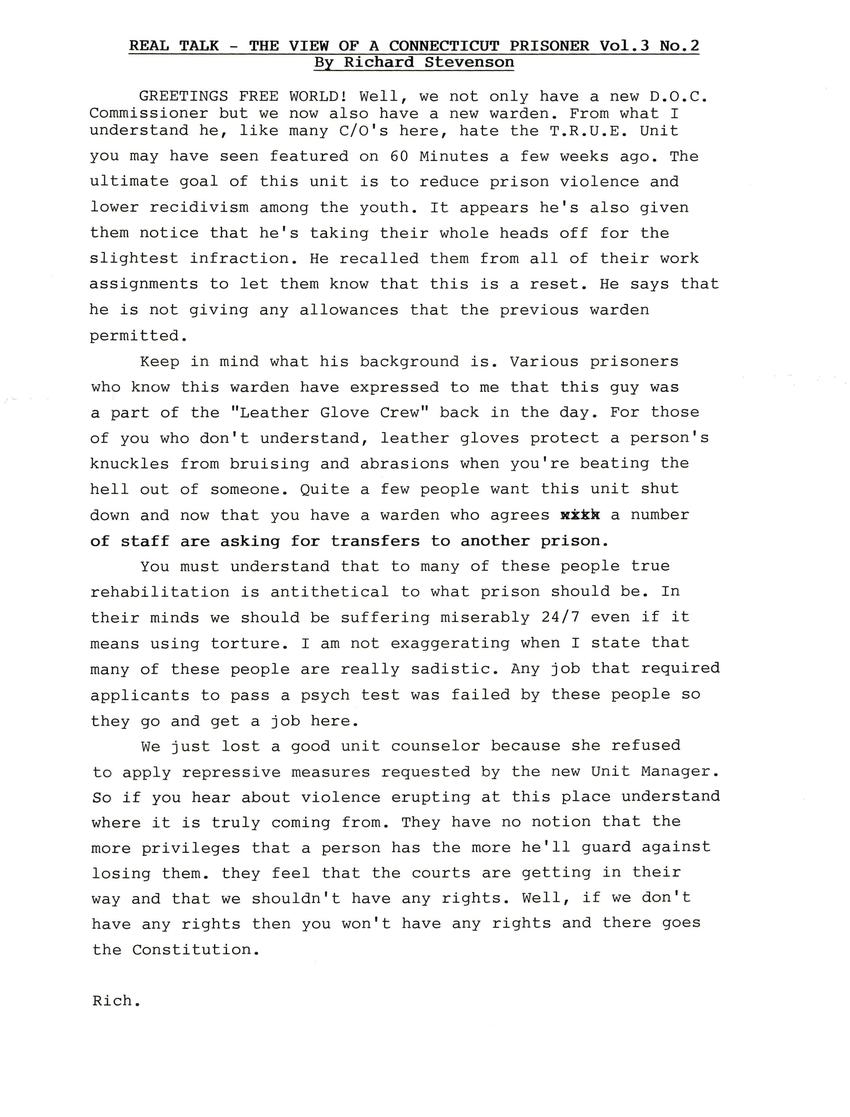 REAL TALK - THE VIEW OF A CONNECTICUT PRISONER Vol.2 No.7
By Richard Stevenson

GREETINGS FREE WORLD! How are your holidays going? Great I hope.
Recently my beautiful 28 year old daughter asked me why was I trying to teach her about the law back when she was about 8 y.o. I explained to her that it is important that she know the law so that she would know when someone was violating her rights and that she should know the law in order not to violate it. Knowing the law would give her a certain amount of confidence, comfort and stability. It has kept me from going off the deep end because I know how to effect remedy(ies) when I find myself in certain situations.
For example, sadistic officers would not allow us to partially cover the cell windows while using the restroom and would write Disciplinary Reports if we did. The lazier ones would open the cell door in order to expose us. Well, knowing that an appellate judge ruled that prisoners do have a measured amount of privacy I obtained a copy of his ruling. I then showed some of these people that they were exposing themselves to financial ruin and the loss of their jobs. Their behaviour changed within a matter of a few weeks. As a compromise, they now knock on the door and ask if everything is O.K.
Anyone can order any recent case directly from the U.S. Supreme Court. In fact, you can order up to 5 cases per term for free. Check its web site and see what else you can get and teach others to do the same. You should also check federal and state agencies for administrative decisions of various appellate courts and federal and local agencies like the Dept. of Labor, E.E.O.C., Freedom of Information Commission, Dept. of Administrative Services, Commission On Human Rights And Opportunities, et al. Read your state penal code. One of the most important things you can do is learn to file your own law suit. It's very empowering. Even if you don't actually do it you should learn what it takes. There is much you would come to know along the way.

REAL TALK - THE VIEW OF A CONNECTICUT PRISONER Vol.3 No.1
By Richard Stevenson

GREETINGS FREE WORLD! Finally, I'm back! The warden, for decided that we can only use the typewriter on 1st shift M-F. The problem is that I work 1st shift M-F out in the Marker Shop inspecting, touching up or painting license plates. Someone somewhere corrected the problem.
We now have a new Unit Manager, the epitome of jackass. For whatever reason he has a real blind hatred of prisoners. They usually kept him either away from most prisoners or in charge of incoming units where people don't know the laws or rules. Most of his own subordinates won't work in any of the units he's in charge of. Many of us have written him up numerous times over the past month. It is petty sadistic people like these who tend to get hurt on the job. I sincerely hope this doesn't happen and hope that cooler heads prevail because no matter what the repercussions would be severe.
We also now have a new Commissioner. Mr. Cook is from Utah. He believes in rehabilitation that benefits society as well as the individual prisoner. C.D.O.C. needs someone from out of state to head the changes necessary to significantly reduce recidivism in this state. I'm just not sure that one person from out of state is enough. I think he will need to bring others. The influential union heads are sadistically stubborn.
Example: We have been "close" to getting tablets for about 2 years. At last check the previous commissioner said that we should have them last January. Now we are being told that we should have them by the end of 2019. More b.s. These union heads will cut off their noses to spite their faces. Having these tablets means lower recidivism, less violence inside and outside the prison, a tool for behaviour modification, a tool for teachers, more former prisoners expanding the tax base, et al.
WHAT'S YOUR OPINION, PRO OR CON?
Rich.

REAL TALK - THE VIEW OF A CONNECTICUT PRISONER Vol.3 No.2
By Richard Stevenson

GREETINGS FREE WORLD! Well, we not only have a new D.O.C. Commissioner but we now also have a new warden. From what I understand he, like many C/O's here, hate the T.R.U.E Unit you may have seen featured on 60 Minutes a few weeks ago. The ultimate goal of this unit is to reduce prison violence and lower recidivism among the youth. It appears he's also given them notice that he's taking their whole heads off for the slightest infraction. He recalled them from all of their work assignments to let them know that this is a reset. He says that he is not giving any allowances that the previous warden permitted.
Keep in mind what his background is. Various prisoners who know this warden have expressed to me that this guy was a part of the "Leather Glove Crew" back in the day. For those of you who don't understand, leather gloves protect a person's knuckles from bruising and abrasions when you're beating the hell out of someone. Quite a few people want this unit shut down and now that you have a warden who agrees a number of staff are asking for transfers to another prison.
You must understand that to many of these people true rehabilitation is antithetical to what prison should be. In their minds we should be suffering miserably 24/7 even if it means using torture. I am not exaggerating when I state that many of these people are really sadistic. Any job that required applicants to pass a psych test was failed by these people so they go and get a job here.
We just lost a good unit counsellor because she refused to apply repressive measures requested by the new Unit Manager. So if you hear about violence erupting at this place understand where it is truly coming from. They have no notion that the more privileges that a person has the more he'll guard against losing them. they feel that the court are getting in their way and that we shouldn't have any rights. Well, if we don't have any rights then you won't have any rights and there goes the Constitution.