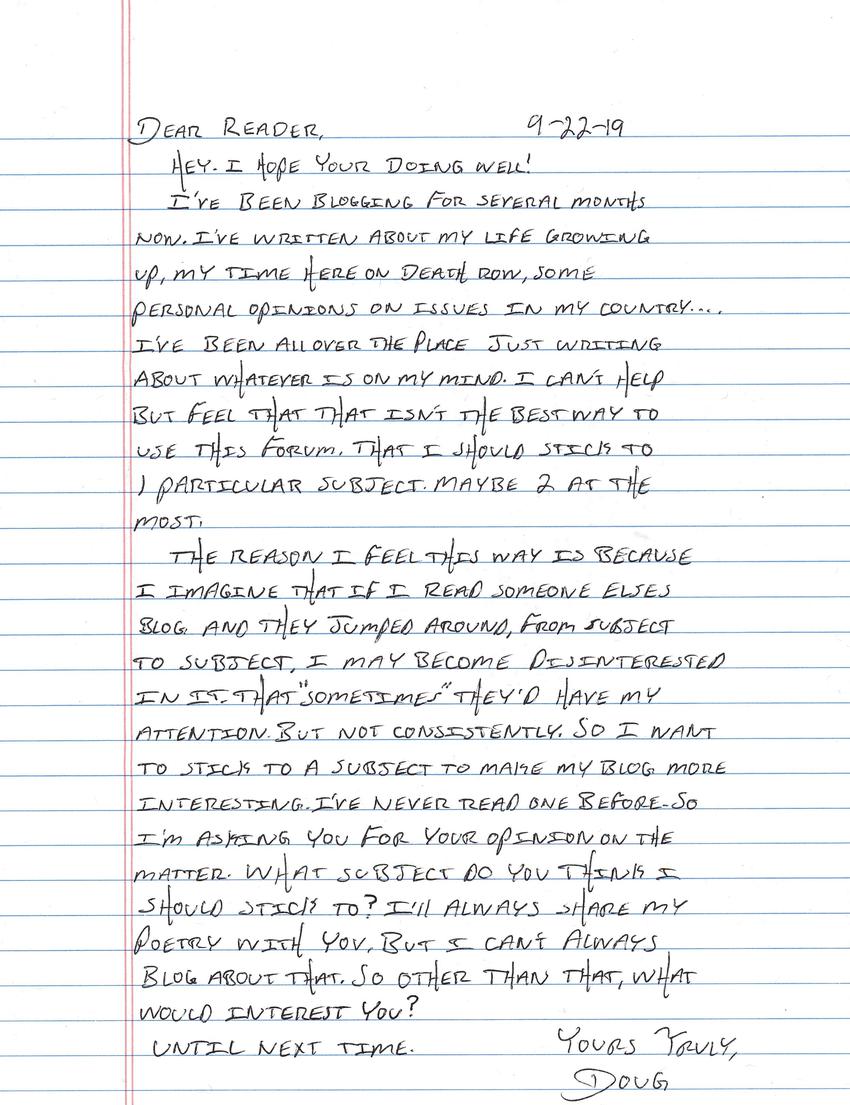 I've been blogging for several months now. I've written about my life growing up, my time here on death row, some personal opinions on issues in my country. I've been all over the place, just writing about whatever is on my mind. I can't help but feel that that isn't the best way to use this forum. That I should stick to one particular subject. Maybe two at the most.

The reason I feel this way is because I imagine that if I read someone else's blog and they jumped around from subject to subject, I may become disinterested in it. That sometimes they'd have my attention but not consistently.

So, I want to stick to a subject to make my blog more interesting. I've never read one before. So, I'm asking you for you opinion on the matter.

What subject do you think I should stick to? I'll always share my poetry with you. But I can't always blog about that. So, other than that, what would interest you?

Blogging or a diary keeping is a strange one. Some days nothing happens, some days the earth shifts. In our minds we can think about five hundred things a day. Stirring your coffee in the morning might elicit a memory, or you might just be feeling happy because you had a satisfactory bowel movement! It's a pity you can't get YouTube in jail and see the people on there who document their lives, some interesting ordinary people out there. What interests you?
(scanned reply – view as blog post)
uploaded Oct. 31, 2019.  Original (PDF) 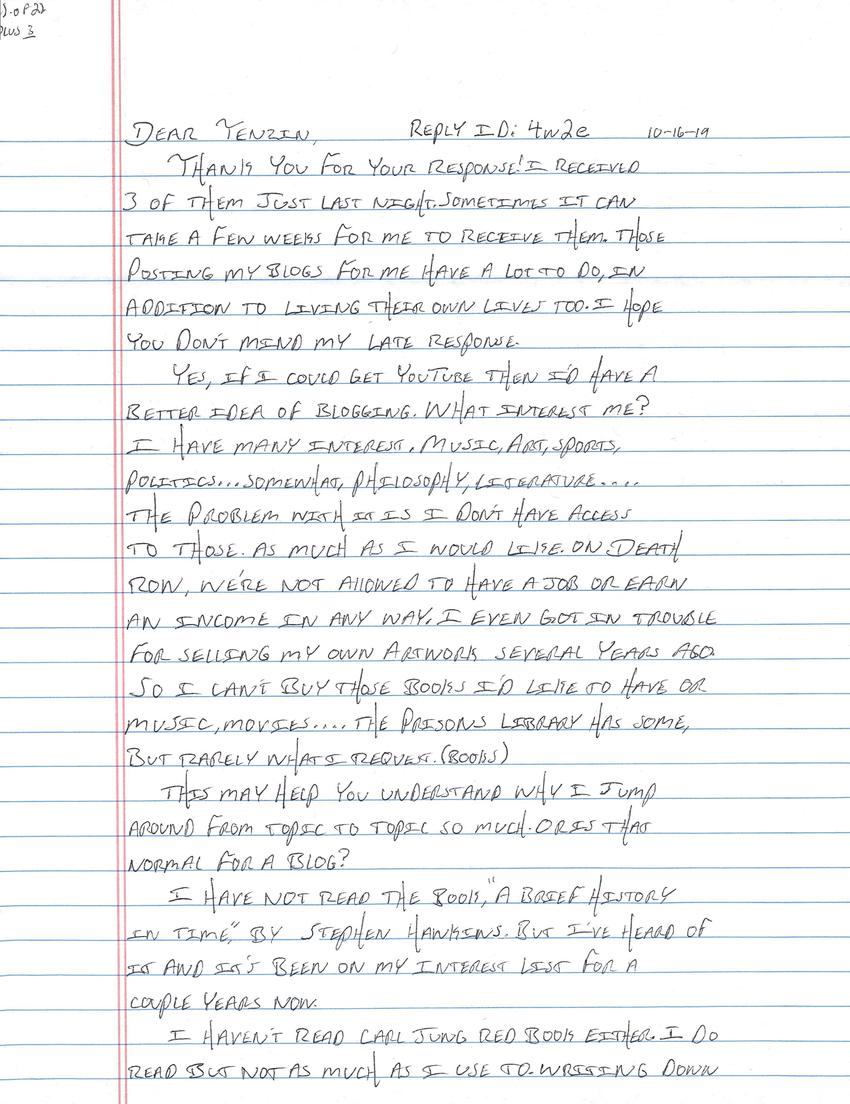 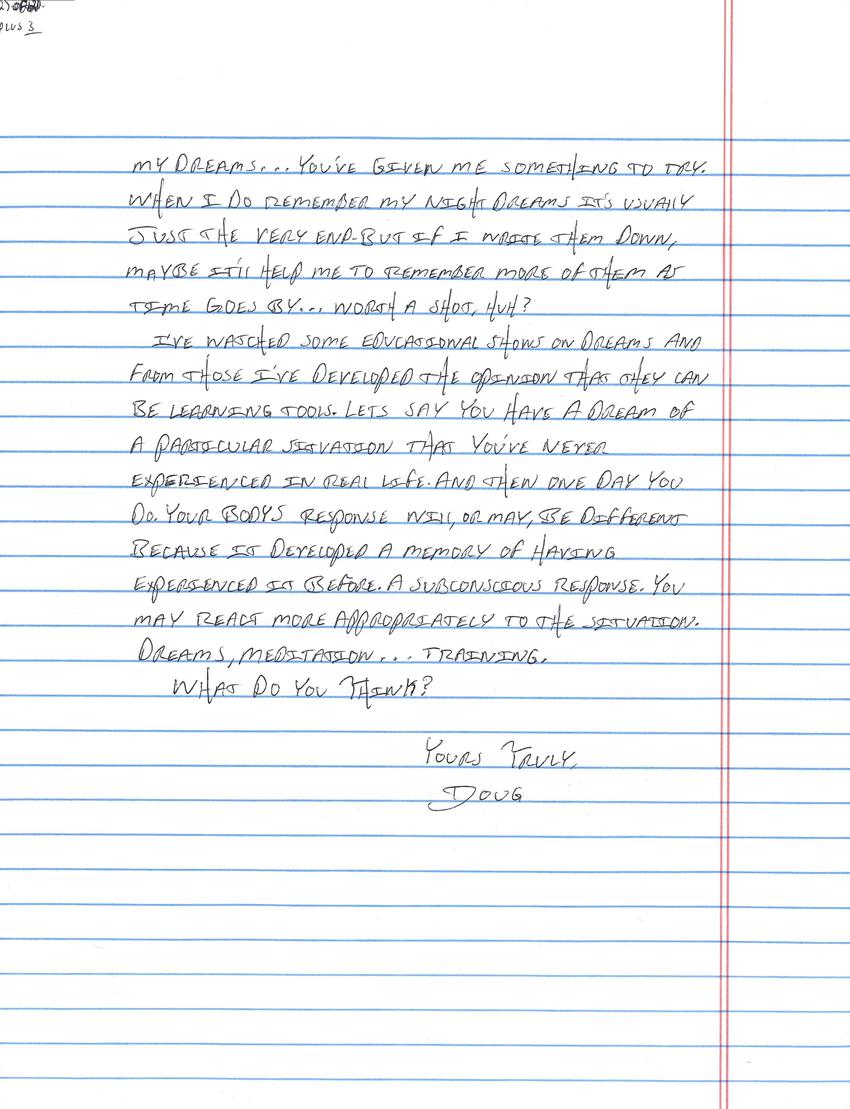 Part one of two,
Hello Douglas.
I hope you are well.
Regarding blogging, or vlogging on YouTube. I got to tell you there are several ex inmate channels on YouTube that are fascinating to watch. There’s a black bloke called ‘Big Herc’, I think his name is Marcus Timmons he has a channel called Fresh Out the Penitentiary. Another white guy called Wes Watson he is more into building muscle and personal character, and some other guys too, but the two I named have the most interesting content. Big Herc even had a prison cooking segment showing how in jail inmates cook with ramen noodle, making burritos and other jail delicacies! Most clips are like 15 minutes long, but others they stream live and get donations, so there is a living to be made there.
Wes Watson told quite a troubling story about how prison yards are segregated into colour race and gangs. We don’t have that here in the U.K. yet, but maybe it’s coming. He talks a lot about building muscle in jail doing ‘burpees’ and stuff like that.
I’ve recently read the Kerry Max Cook book, Chasjng Justice. He spent 22 years on death row for a rape murder he was totally innocent of. Came within 11 days of execution. Texas cops lawyers, you name them, they all screwed him. Trouble is when they have your nuts in their hands, you can’t do much when they start squeezing them. In your country the level of justice you get depends on how much you are willing to pay to get a good lawyer. Texas especially seem very eager to execute people, the Rodney Reed case is disturbing, he is definately innocent and has sat in a jail for decades. People on the outside interpret silence and inactivity for guilt. But these cases are like quicksand, the more you move the worse it gets. I’ve tried to write to governors of Texas in a vain attempt to intervene, but nothing yet. They won’t listen to me anyway, why would they, I’m not even American? Years ago when I was 16 I met some Texans on a train, they were the first Americans outside of my dads brother, that I had ever met. They were from Austin. They told me, back then, that Texans were a different kind of American, that they were more persistent and unlikely to bend to others will. Which is great when you are building a state, but treacherous when confronted with a mistake you won’t acknowledge. I’m terrified for Rodney and his family. Hopefully someone will see some sliver of humanity and stay the order.
I’m unfamiliar with your case. UK internet servers won’t allow me to download your case, and it’s expensive too. Unfortunately I’m a poor person!!
Music wise I am rather fond of rap. Early stuff Wu tang, Busta Rhymes, Salt and Pepa Faith Evans, Beyonce Biggie Smalls. Stevie Wonder Red Hot Chili Peppers, quite eclectic really. I despise modern rap, trap music, anything that is ‘over produced’ collaborations bore me, all that Justin Beiber DJ Khalid stuff is dire boring and repetitive.
Part two of two
I think some people become lazy when they get successful. I know I’ll get flack for saying this, Jay Z got dull!! Dave Chappell said this quote, which I agree with, ‘Success can take you, where character cannot sustain you.’
Ergo: Tekashi 69 or Daniel Hernandez. Are you familiar with him? His notoriety is now as being a snitch, but he was refreshing in the rap game. Sounded anarchic, new, brought a much needed new flavour. It will be interesting to see what kind of sentence he gets, and how the music world treats him when he gets out. People tend to be more accepting of people who can stand on their wallets. Money talks and all that.
As an older person I still find music interesting. Even though I’m too grey and too old to dance anymore, (arthritic hips and back)
You should definately write down your dreams the moment you wake, Jung used to keep a notepad under his pillow for that very purpose. Dreams are bizarre, you can have the most incredible dream, wake up, and be in awe of it and then moments later it dissolves like sugar in hot water and you can forget it instantly, yet still feel it’s remnants on you. I have a lot of ‘missing trains’ and ‘late for exams’ dreams. Dreams are weird, have you ever watched a dog asleep who is dreaming? Their feet twitching as they chase dream cats! Dreams must serve a purpose or are they just nocturnal entertainment?
So happy to have received a reply from you.
T
(scanned reply – view as blog post)
uploaded Nov. 24, 2019.  Original (PDF) 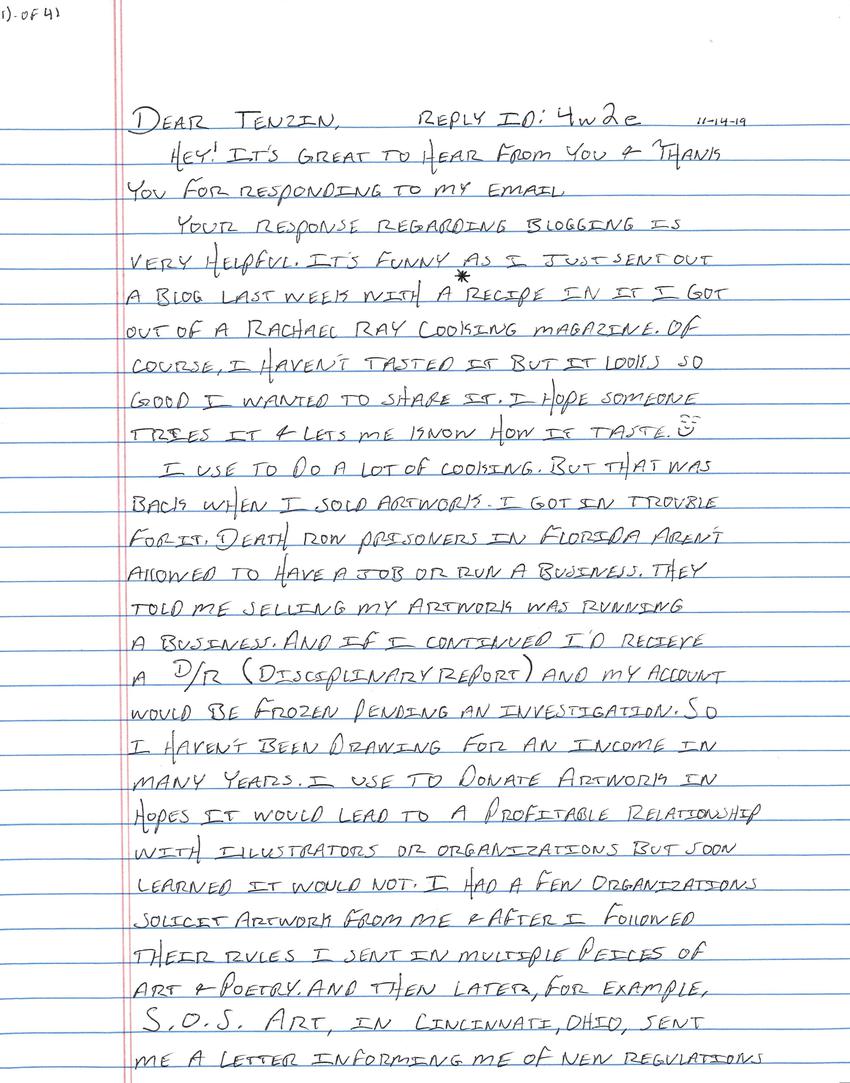 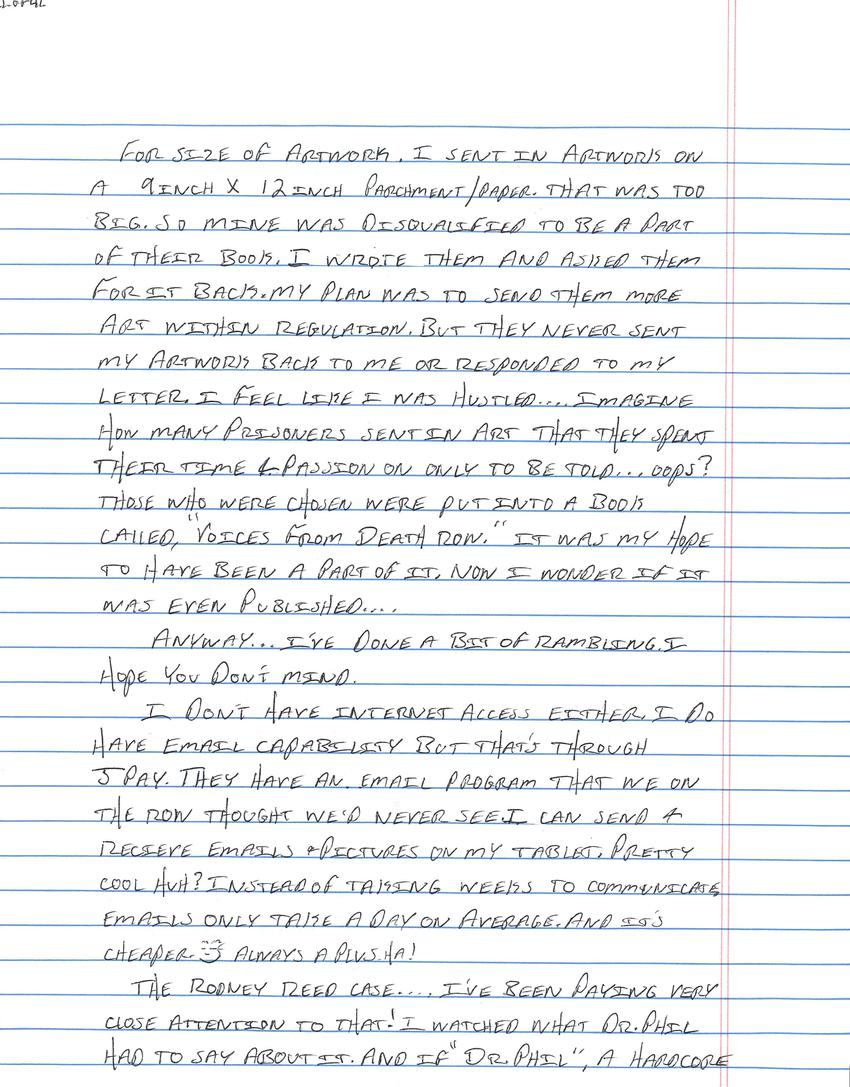 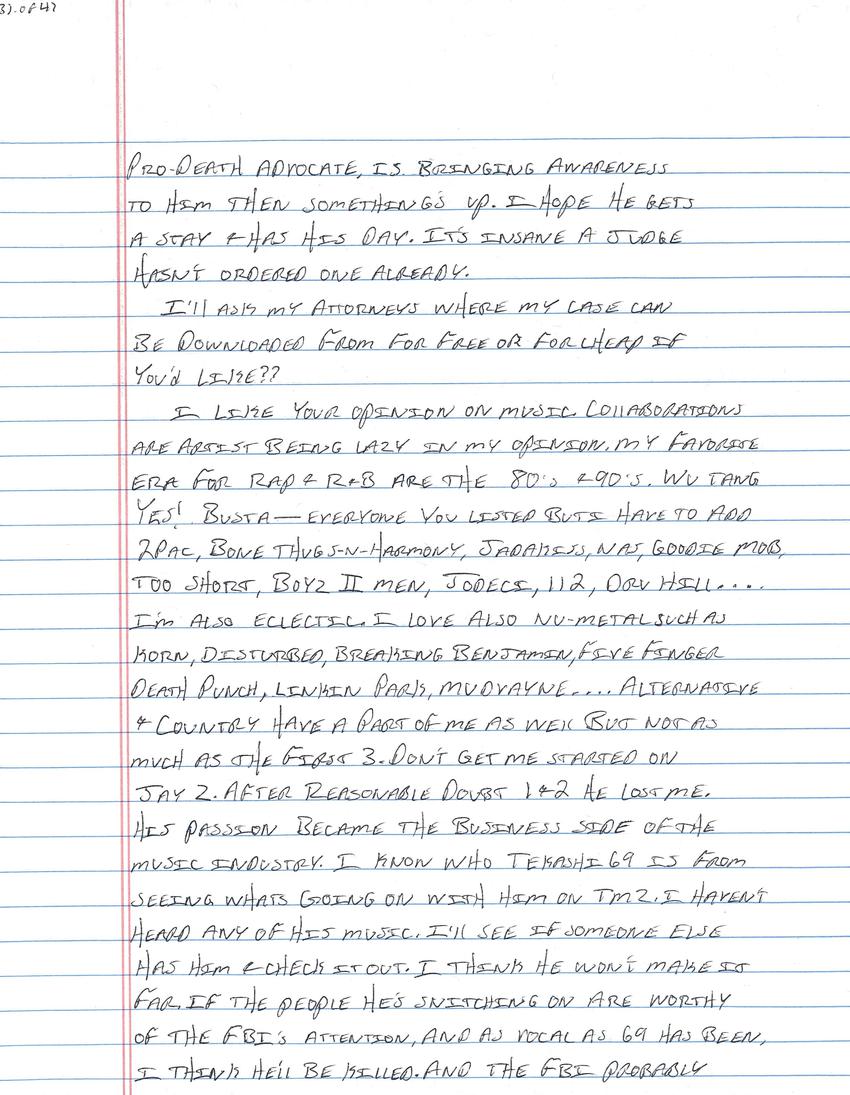 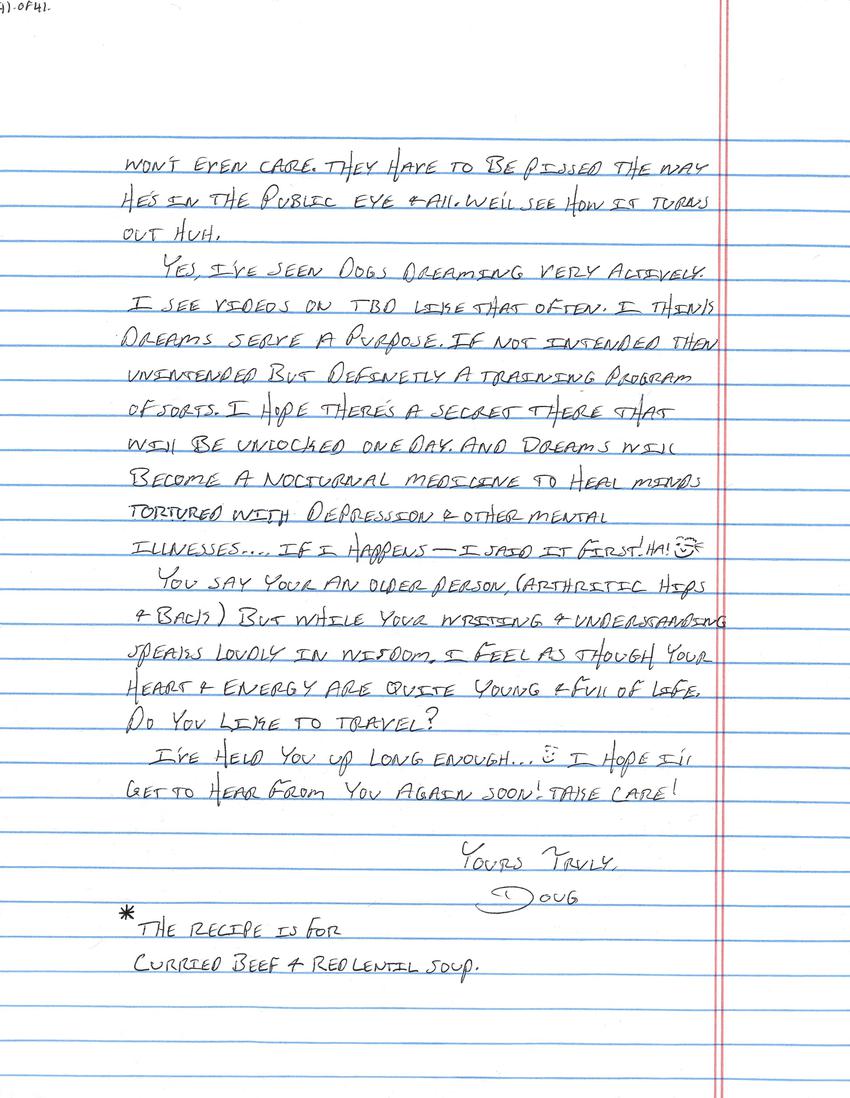 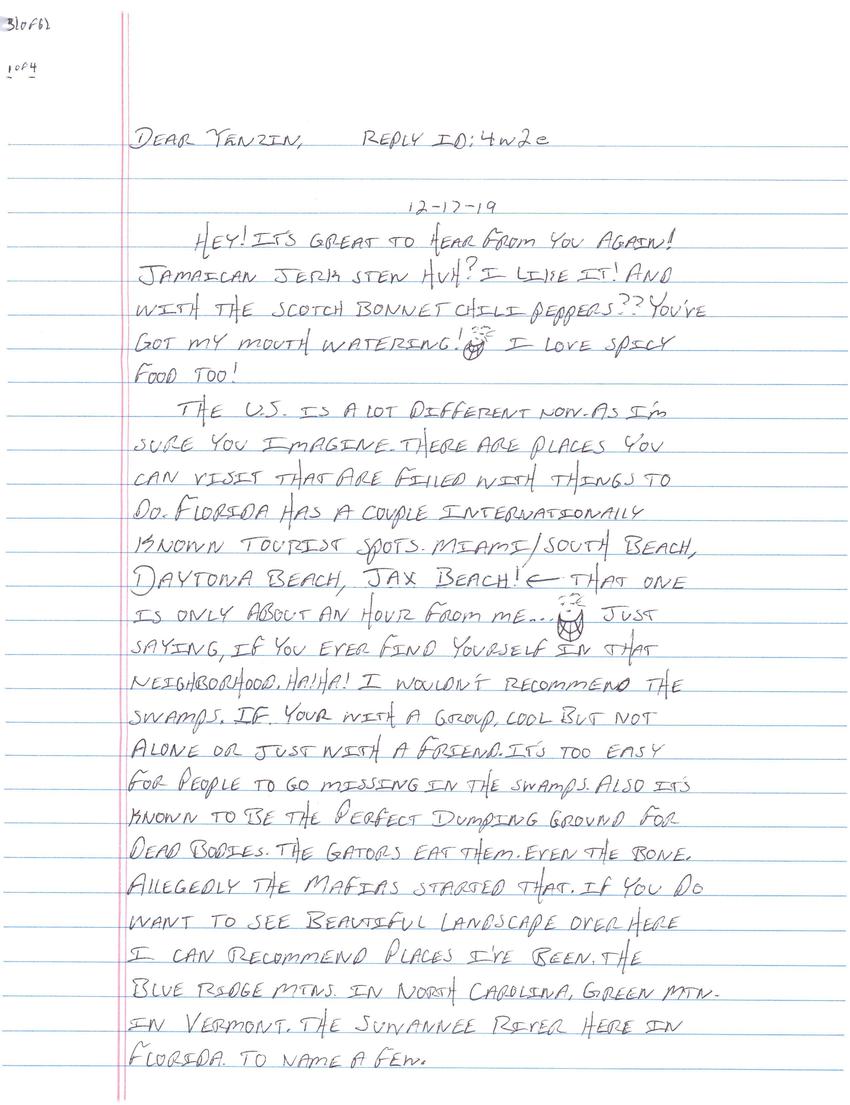 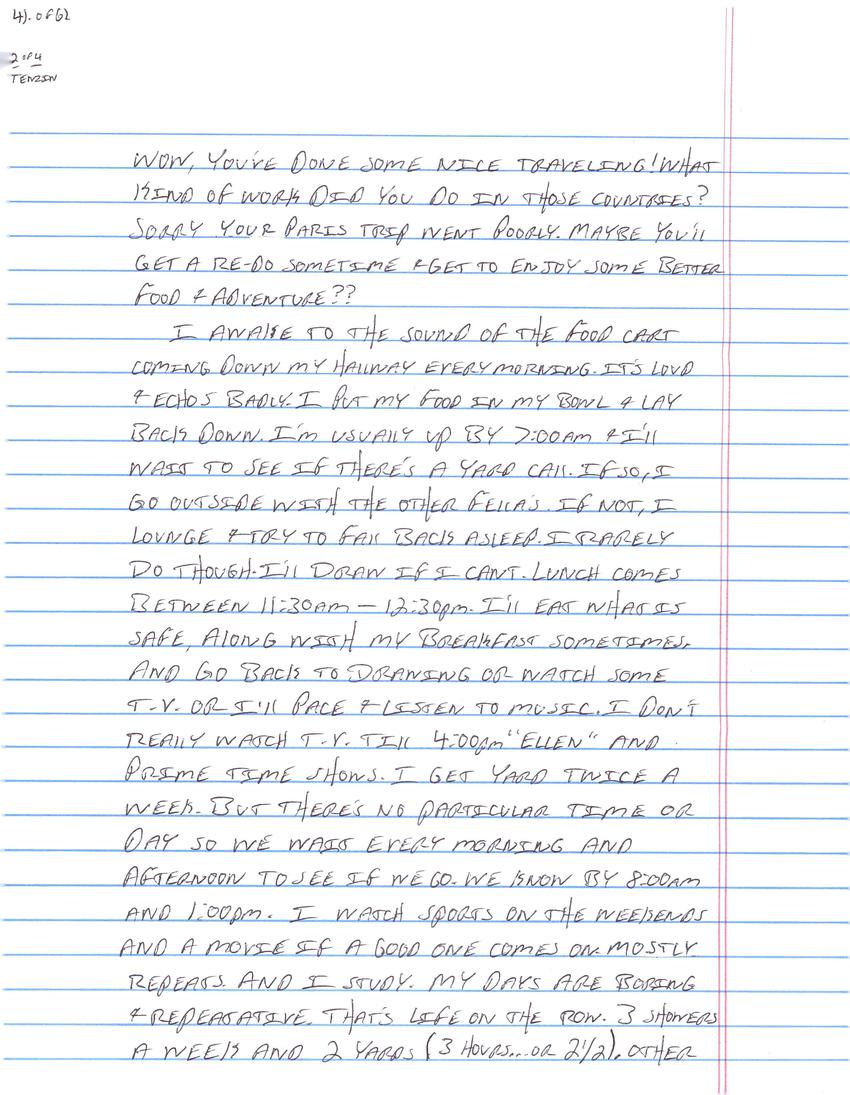 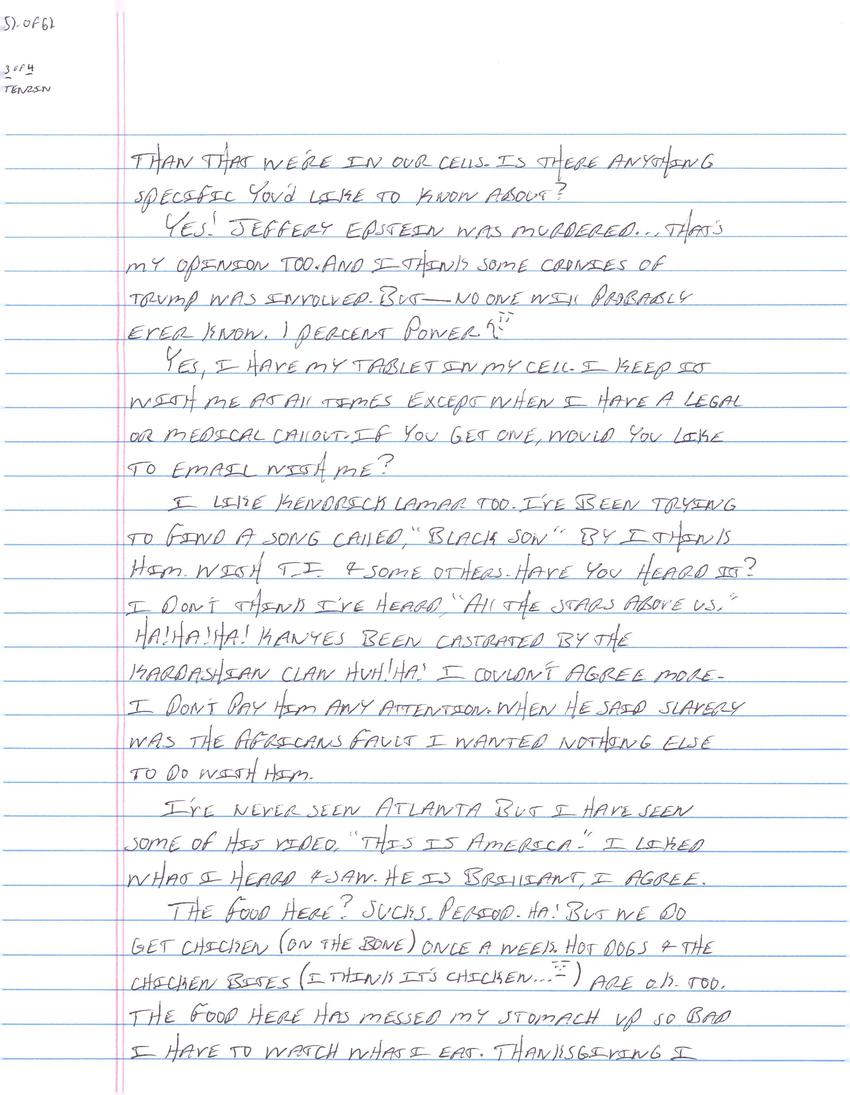 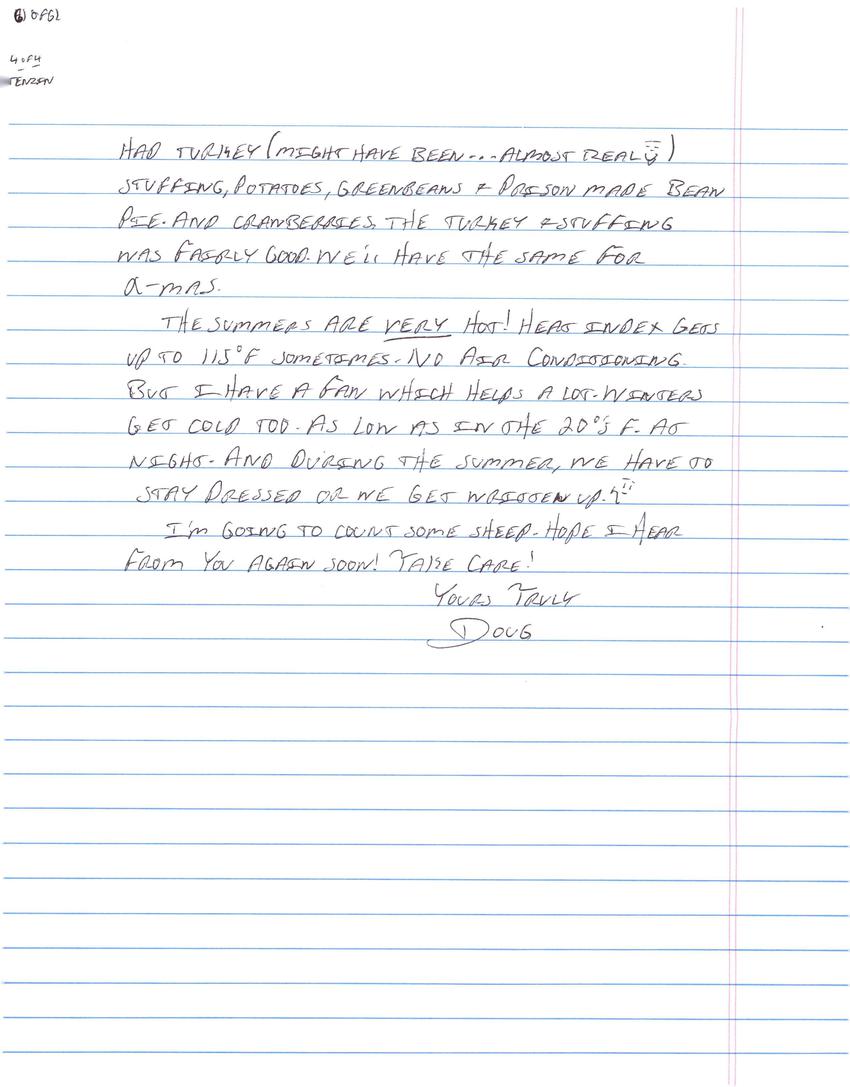 Hello Douglas
Today is the 28th December, and Christmas is over. Christmas Day was great. My brother bought my dad a giant television 55 inches. It’s like sitting in front of the cinema. We watched Shawshank Redemption, it took some doing as my Dad (86) is addicted to sports and quiz shows, he is VERY territorial about the remote control!. He got in a really bad mood setting it up, took him hours! I am no good at that sort of thing. Anyway, I was in the kitchen cooking every vegetable known to man and a roast chicken. We are not turkey fans here. Regarding beaches in Florida. Not for me. I couldn’t lie out in the sun for money, it’s boring, and you can’t read properly. If I were to visit the states again it would be to see interesting stuff like the Smithsonian and Metropolitan Museum of Modern art. Also Louisiana, New Orleans, I want to see a really big redwood tree, and the Grand Canyon, that sort of stuff. Can’t do any climbing so mountains are out. I actually trekked to base camp at Everest in 1998, when I was fit. The travelling I did, I used to do any lousy job I could then save save save then travel. Doing cleaning jobs, waitressing anything really. Was never a career person. English sport is bollocks, soccer, cricket. Rugby is okay. I like watching US Basketball it has never taken off here, they tried to launch it several times but the British public weren’t buying. One thing I don’t understand about basketball is that you have these freakishly tall men, on this tiny court with a basket they can easily reach. Why don’t they make the court bigger, and the basket higher so a degree of difficulty is added to the game? I watch the odd baseball game. Modern baseball is too monetised to be interesting, old time baseball was better. I like the Seattle Seahawks because they signed Shaquem Griffin he lost his hand, but he can still catch a ball, he is incredible. We used to be Eagles fans, but we aren’t loyal!!! I’m reading The Hero with a thousand faces, by Joseph Campbell. He’s a yank like you. Really smart guy, links religion to mythology and makes some interesting observations about as as modern people. Well Tekashi did well, only has to serve another 12 months before he is free. I think he is probably safer in jail. Would he be in general population?
Part 1 of 2.
Part 2 of 2

What’s the best dish, food wise, that you can get in prison? What do you get for breakfast?
This tablet of yours, can you download music, movies etc on it? I got an iPad mini for Christmas. I think they got it for me because they are sick of lending me their devices! I am just leaning to use it. How can I email you, how does that work and how do I apply?
I’ve just reread my post. So many scrambled thoughts and questions. I hope you don’t mind me asking so much stuff!
Well that’s all for now. Hope you are well, and that 2020 is a great year for you.
T