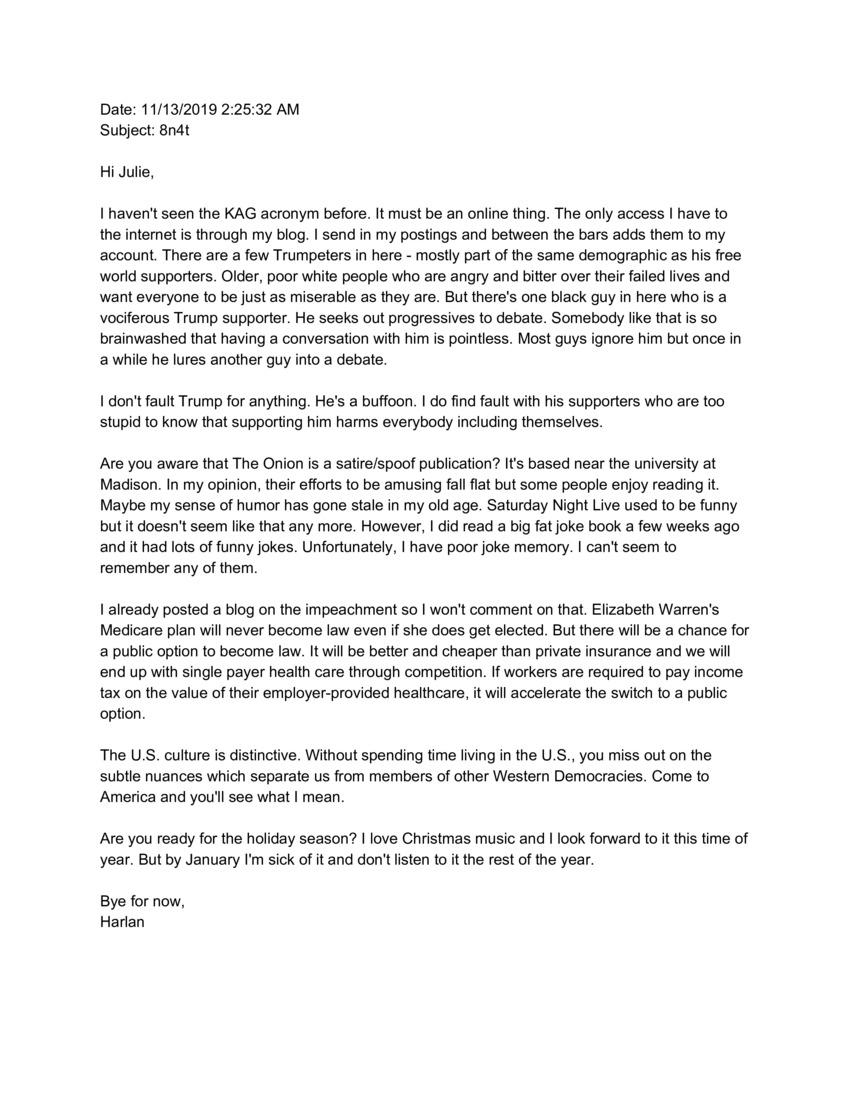 I haven't seen the KAG acronym before. It must be an online thing. The only access I have to the Internet is through my blog. I send in my postings and Between the Bars adds them to my account.

There are a few Trumpsters in here—mostly part of the same demographic as his free world supporters: older, poor white people who are angry and bitter over their failed lives and want everyone to be just as miserable as they are. But there's one black guy in here is a vociferous Trump supporter. He seeks out progressives to debate. Somebody like that is so brainwashed that having a conversation with him is pointless. Most guys ignore him, but once in awhile he lures another guy into a debate.

I don't fault Trump for anything. He's a buffoon. I do find fault with his supporters who are too stupid to know that supporting him harms everybody including themselves.

Are you aware that The Onion is a satire/spoof publicatoin? It's based near the university at Madison. In my opinion, their efforts to be amusing fall flat, but some people enjoy reading it. Maybe my sense of humor has gone stale in my old age. Saturday Night Live used to be funny, but it doesn't seem like that anymore.

However, I did read a big fat joke book a few weeks ago, and it had lots of funny jokes. Unfortunately, I have poor joke memory. I can't seem to remember any of them.

Elizabeth Warren's Medicare plan will never become law even if she does get elected. But there will be a chance for a public option to become law. It will be better and cheaper than private insurance, and we will end up with single payer health care through competition. If workers are required to pay income tax on the value of their employer-provided healthcare, it will accelerate the switch to a public option.

The US culture is distinctive. Without spending time living in the US, you miss out on the subtle nuances which separates us from members of other Western democracies. Come to America and you'll see what I meant.

Are you ready for the holiday season? I love Christmas music, and I look forward to it this time of year. But by January, I'm sick of it and don't listen to it for the rest of the year.