My rights; Your rights... Who's Right? 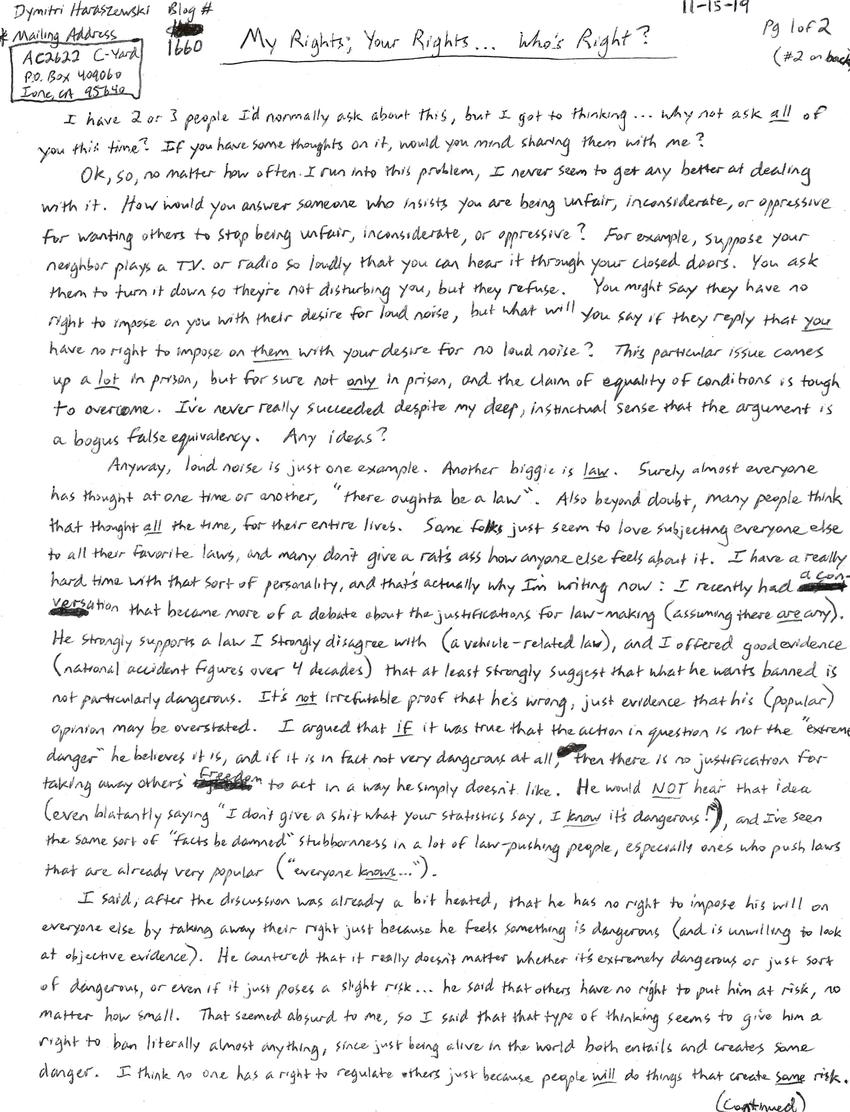 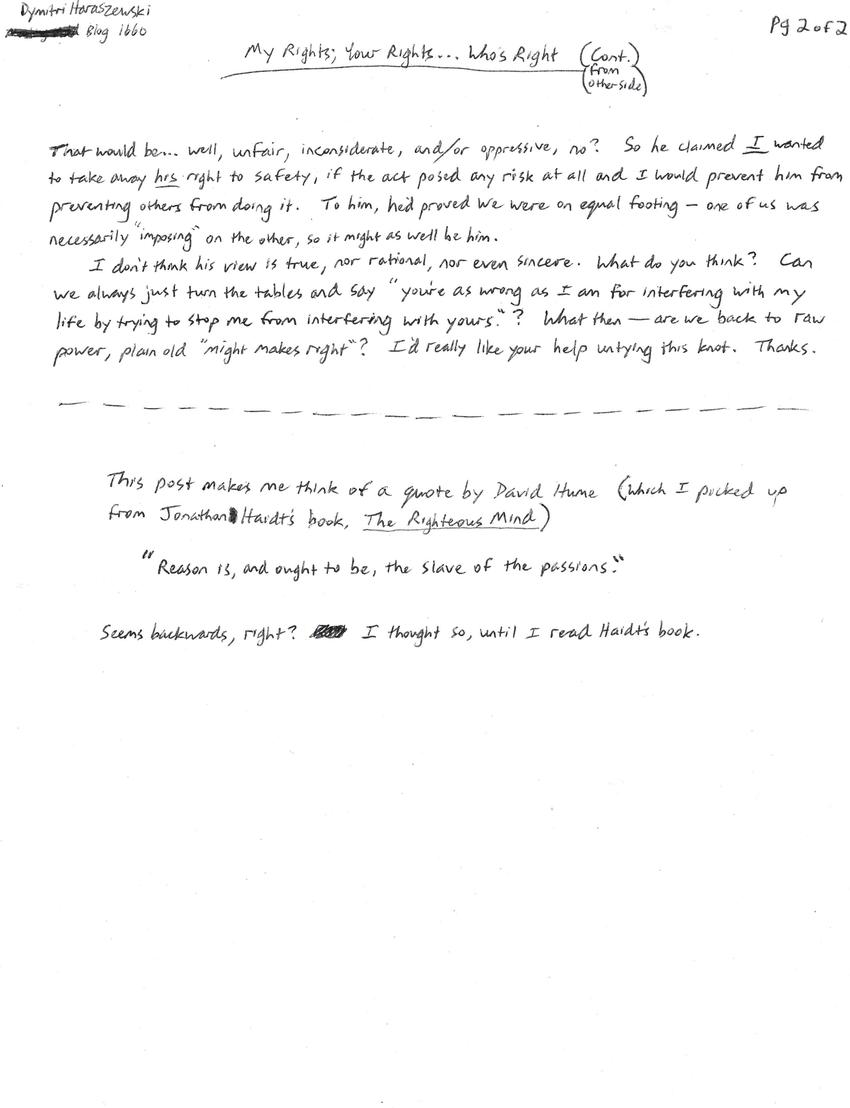 My Rights; Your Rights...Who's Right?

I have 2 or 3 people I'd normally ask about this, but I got to thinking...why not ask all of you this time? If you have some thoughts on it, would you mind sharing them with me?
Ok, so, no matter how often I run into this problem, I never seem to get any better at dealing with it. How would you answer someone who insists you are being unfair, inconsiderate or oppressive? For example, suppose your neighbour plays a T.V. or radio so loudly that you can hear it through your closed doors. You ask them to turn it down so they're not disturbing you, but they refuse. You might say they have no right to impose on you with their desire for loud noise, but what will you say if they reply that you have no right to impose on them with your desire for no loud noise? This particular issue comes up a lot in prison, but for sure not only in prison, and the claim of equality of conditions is tough to overcome. I've never really succeeded despite my deep, instinctual sense that the argument is a bogus false equivalency. Any ideas?

Anyway, loud noise is just one example. Another biggie is law. Surely almost everyone has thought at one time or another, "there oughta be a law". Also, beyond doubt, many people think that thought all the time, for their entire lives. Some folks just seem to love subjecting everyone else to all their favourite laws, and many don't give a rat's ass how anyone else feels about it. I have a really hard time with that sort of personality, and that's actually why I am writing now: I recently had a conversation that became more of a debate about the justifications for law-making (assuming there are any). He strongly supports a law I strongly disagree with (a vehicle-related law), and I offered good evidence (national accident figures over 4 decades) that at least strongly suggest that what he wants banned is not particularly dangerous. It's not irrefutable proof that he's wrong, just evidence that his (popular) opinion may be overstated. I argued that if it was true that the action in question is not the "extreme danger" he believes it is, and if it is in fact not very dangerous at all, then there is no justification for taking away others' freedom to act in a way he simply doesn't like. He would NOT hear that idea (even blatantly saying "I don't give a shit what your statistics say, I know its dangerous!), and I've seen the same sort of "facts be damned" stubbornness in a lot of law-pushing people, especially ones who push laws that are already very popular ("everyone knows...").

I said, after the discussion was already a bit heated, that he has no right to impose his will on everyone else by taking away their right just because he feels something is dangerous (and is unwilling to look at objective evidence. He countered that it really doesn't matter whether it's extremely dangerous or just sort of dangerous, or even if it just poses a slight risk...he said that others have no right to put him at risk, no matter how small. That seemed absurd to me; so I said that that type of thinking seems to give him a right to ban literally almost anything, since just being alive in the world both entails and creates some danger. I think no one has a right to regulate others just because people will do things that create some risk. That would be...well, unfair, inconsiderate, and/or oppressive, no? So he claimed I wanted to take away his right to safety, i the act posed any risk at all and I would prevent him from preventing others from doing it. To him, he'd proved we were on equal footing - one of us was necessarily "imposing" on the other, so it might as well be him.

I don't think his view is true, nor rational, nor even sincere. What do you think? Can we always just turn the tables and say "your'e as wrong as I am for interfering with my life by trying to stop me from interfering with yours?" What then - are we back to raw power, plain old "might makes right?: I'd really like your help untying this knot. Thanks.

This post makes me think of a quote by David Hume (which I picked up from Jonathan Haidt's book, The Righteous Mind)

"Reason is, and ought to be, the slave of passions".

Seems backwards, right? I thought so, until I read Haidt's book.

Thank you for writing. I feel that it is difficult to give my views on your debate without actually knowing the specifics of this vehicle related law. Though, my initial thoughts would be that what is most important is the right of an individual to safety. I don't think that depriving someone of the right to do something which poses a risk to the lives of others is really depriving them of a right. Surely they should not have this right in the first place? I guess one of the most important reasons why we have laws is to protect people from the harm that they might face from others. And, with this in mind, I would be inclined to support this vehicle related law (though my opinion might be different was I to know its specifics). Law in itself will always be a compromise, protecting some people at the expense of what others might deem their liberty to engage in certain practices or activities. However, I would once again tend to the view that to engage in an activity or practice that does pose a direct risk to the life of another is not a right that one should really have.

I look forward to hearing any further thoughts of yours. 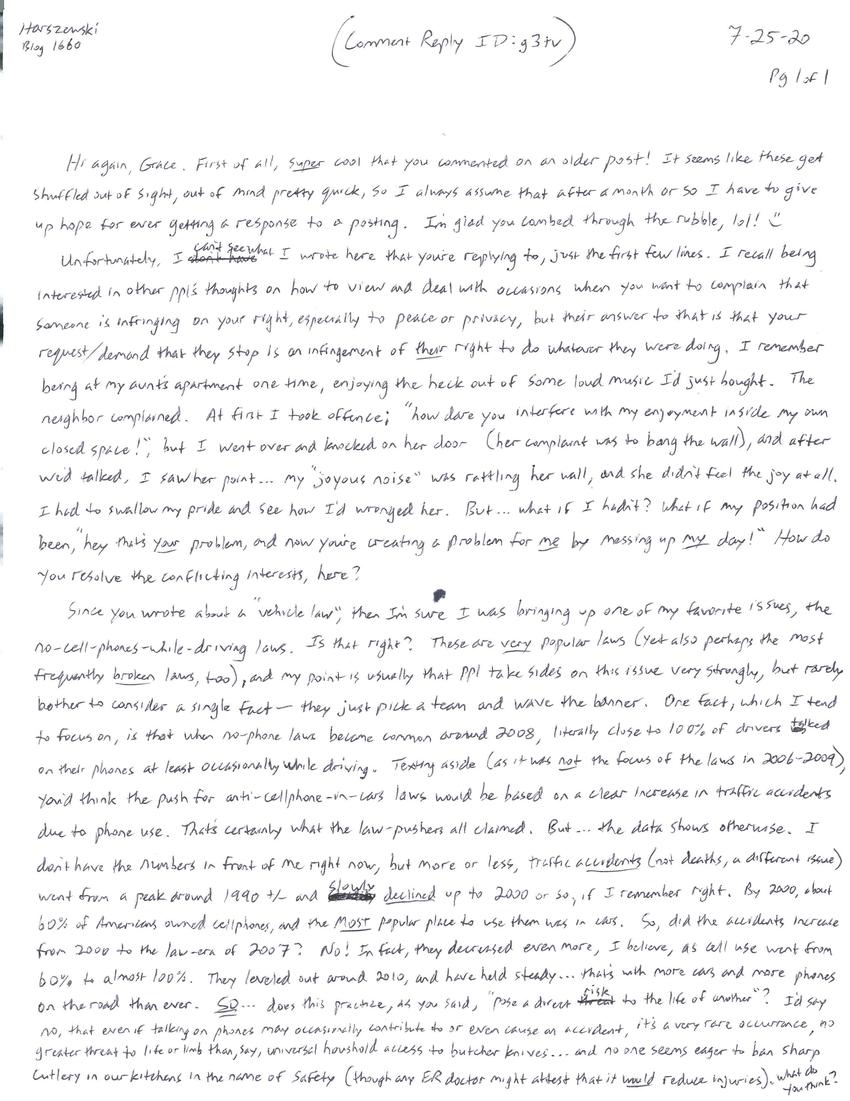