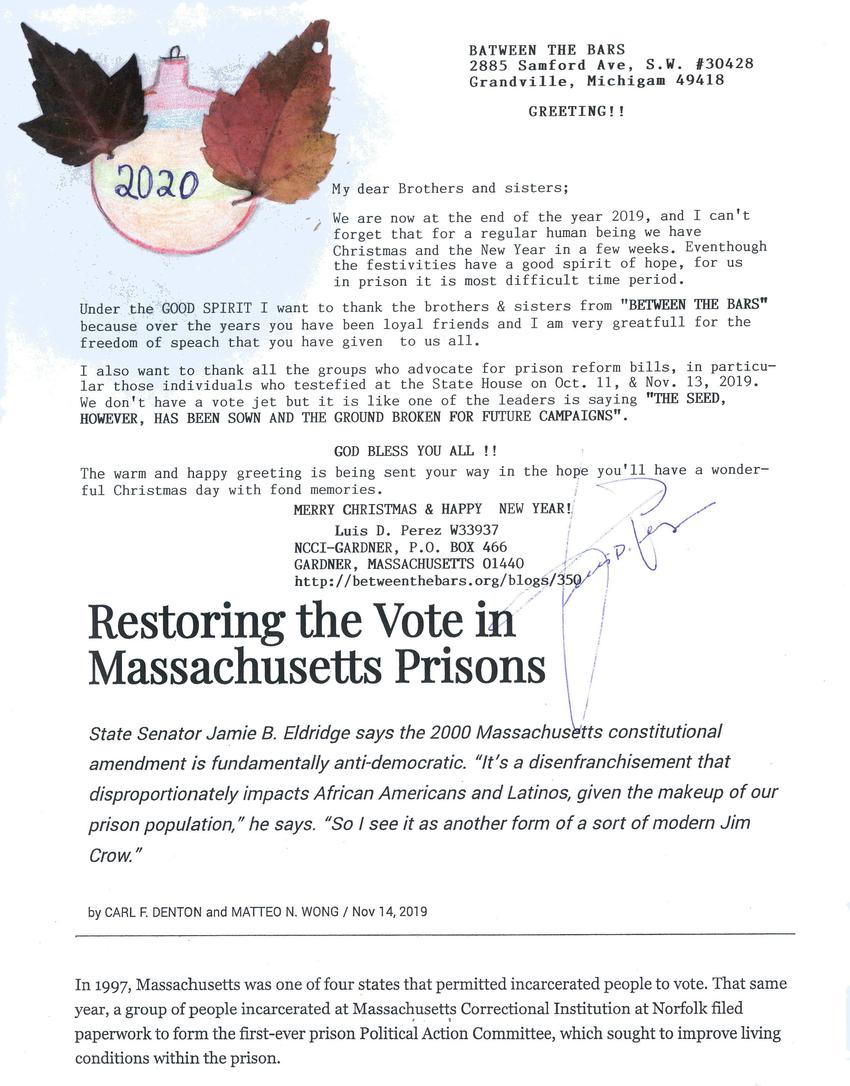 Hand drawing of a Christmas ornament with 2020 on it. Two pressed autumn leaves frame it.

My dear brothers and sisters,

We are now at the end of the year 2019, and I can't forget that for a regular human being we have Christmas and the new year in a few weeks. Even though the festivities have a good spirit of hope, for us in prison, it is the most difficult time period.

Under the GOOD SPIRIT I want to thank the brothers and sisters from Between the Bars because over the years, you have been loyal friends and I am very grateful for the freedom of speech that you have given to us all.

I also want to thank all the groups who advocate for prison reform bills, in particular those individuals who testified at the state house on Oct. 11 and Nov. 13, 2019. We don't have a vote yet, but it is like one of the leaders is saying, "THE SEED, HOWEVER, HAS BEEN SOWN AND THE GROUND BROKEN FOR FUTURE CAMPAIGNS."

GOD BLESS YOU ALL!

This warm and happy greeting is being sent your way in the hopes you'll have a wonderful Christmas day with fond memories.

Restoring the Vote in Massachusetts Prisons
State Senator Jamie B. Eldridge says the 2000 Massachusetts constitutional amendment is fundamentally anti-democratic. "It's a disenfranchisement that disproportionately impacts African Americans and Latinos, given the makeup of our prison population," he says. "So I see it as another form of a sort of modern Jim Crow."

In 1997, Massachusetts was one of four states that permitted incarcerated people to vote. That same year, a group of people incarcerated at Massachusetts Correctional Institution at Norfolk filed paperwork to form the first-ever prison Political Action Committee, which sought to improve living conditions within the prison.

I love you Dad.... Your blog is so long with lots of beautiful letters. Continue staying positive & never give up hope.