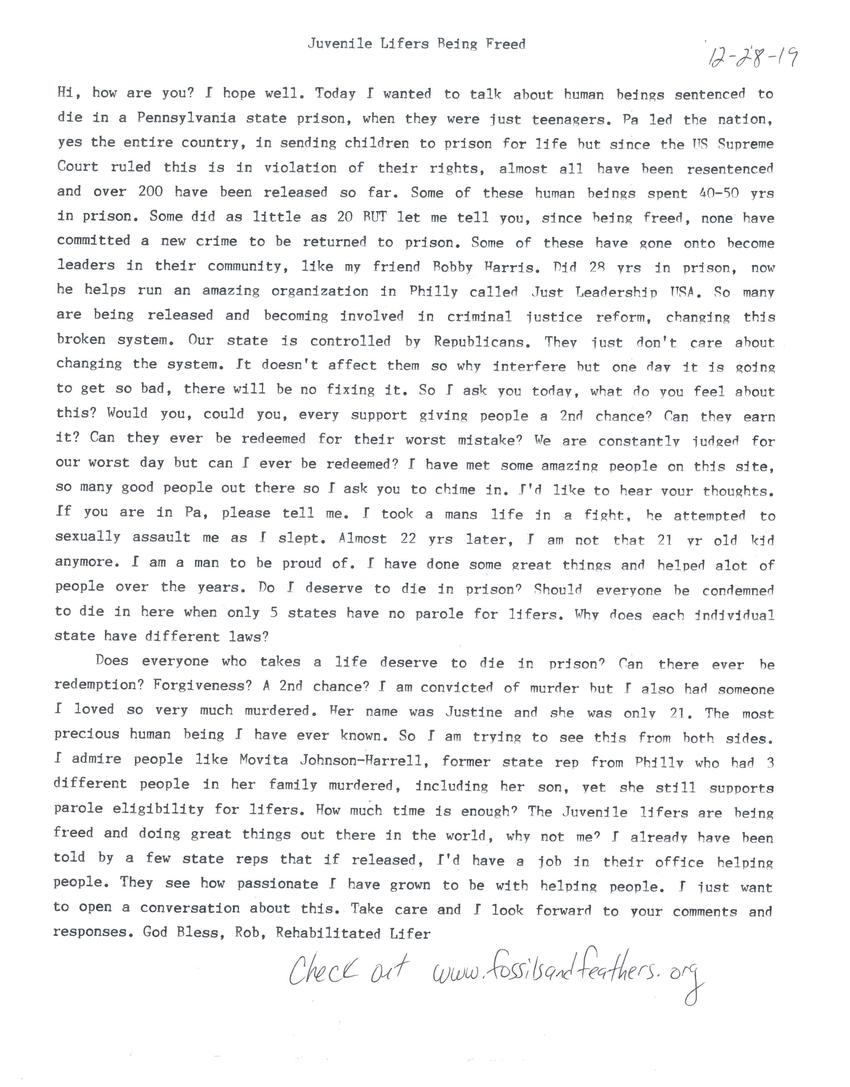 Hi, how are you? I hope well. Today I wanted to talk about human beings sentenced to die in a Pennsylvania state prison, when they were just teenagers. Pa led The nation, yes the entire country, in sending children to prison for life but since the US Supreme Court ruled this is in violation of their rights, almost all have been re-sentenced and over 200 have been released so far. Some of these human beings spent 40 -50 years in prison. some did as little as 20 BUT let me tell you, since being freed, none have committed a new crime to be returned to prison. Some of these have gone on to become leaders in their community, like my friend Bobby Harris. Did 28 years in prison, now he helps run an amazing organization in Philly called Just Leadership USA. So many are being released and becoming involved in criminal justice reform, changing this broken system. Our state is controlled by Republicans. They just don’t care about changing the system. It doesn’t affect them so why interfere but one day it is going to get so bad, there will be no fixing it. So I ask you today, what do you feel about this? Would you, Could you, every support giving people a 2nd chance? Can they earn it? Can they ever be redeemed for their worst mistake? We are constantly judged for our worst day but can I ever be redeemed? I have met some amazing people on this site, so many good people out there so I ask you to chime in. I’d like to hear your thoughts. If you are in Pa, please tell me. I took a man’s life in a fight, he attempted to sexually assault me as I slept. Almost 22 years later, I am not that 21-year-old kid anymore. I am a man to be proud of. I have done some great things and helped a lot of people over the years. Do I deserve to die in prison? Should everyone be condemned to die in here when only five states have no parole for lifers. Why does each individual state have different laws?
Does everyone who takes a life deserve to die in prison? Can there ever be redemption? Forgiveness? A 2nd chance? I am convicted of murder but I also had someone I loved so very much murdered. Her name is Justine and she was only 21. The most precious human being I have ever known. So I am trying to see this from both sides. I admire people like Motiva Johnson-Harrell, Former state rep from Philly who had three different people in her family murdered, including her son, yet she still supports parole eligibility for lifers. How much time is enough? Did you find a lifers are being freed and doing great things out there in the world, why not me? I already have been told by a few state reps that if released, I’d have a job in their office helping people. They see how passionate I have grown to be with helping people. I just want to open a conversation about this. Take care and I look forward to your comments and responses. God Bless, Rob, Rehabilitated Lifer.
Check out www.fossilsandfeathers.org

I absolutely believe that people can change. I am not the person I was at 21. The you who killed someone at 21 must seem like a stranger. Your continued incarceration does not bring the person you killed back, and it does not seem like you are a person who would hurt someone now. I support a complete overhaul of our justice system, not just parole for lifers. I hope that lawmakers read your letter and make the necessary changes to our justice system. It is failing our country and its citizens. 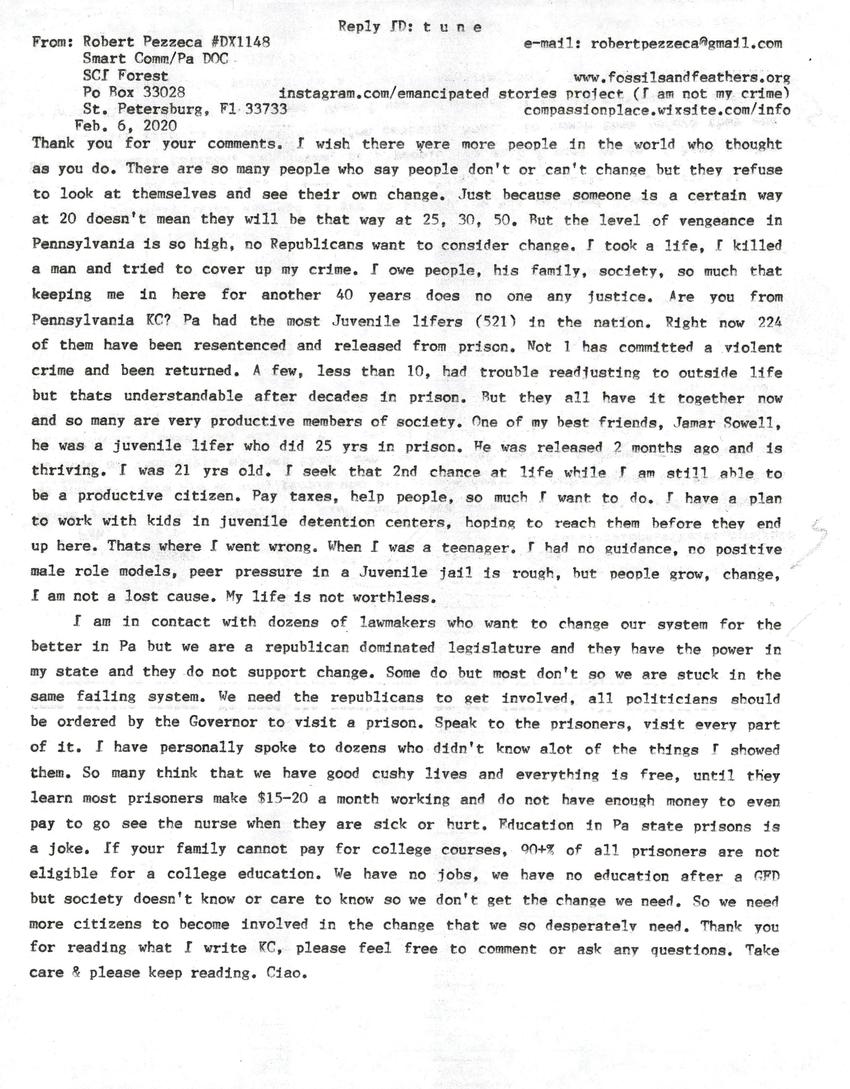 You sure do like to change that story, forgetting that many of us that were in the courtroom remember the testimony.

You weren’t sexually assaulted while you slept. The world knows the real story, and trust there are those of us that keep tabs to make sure you are never released.