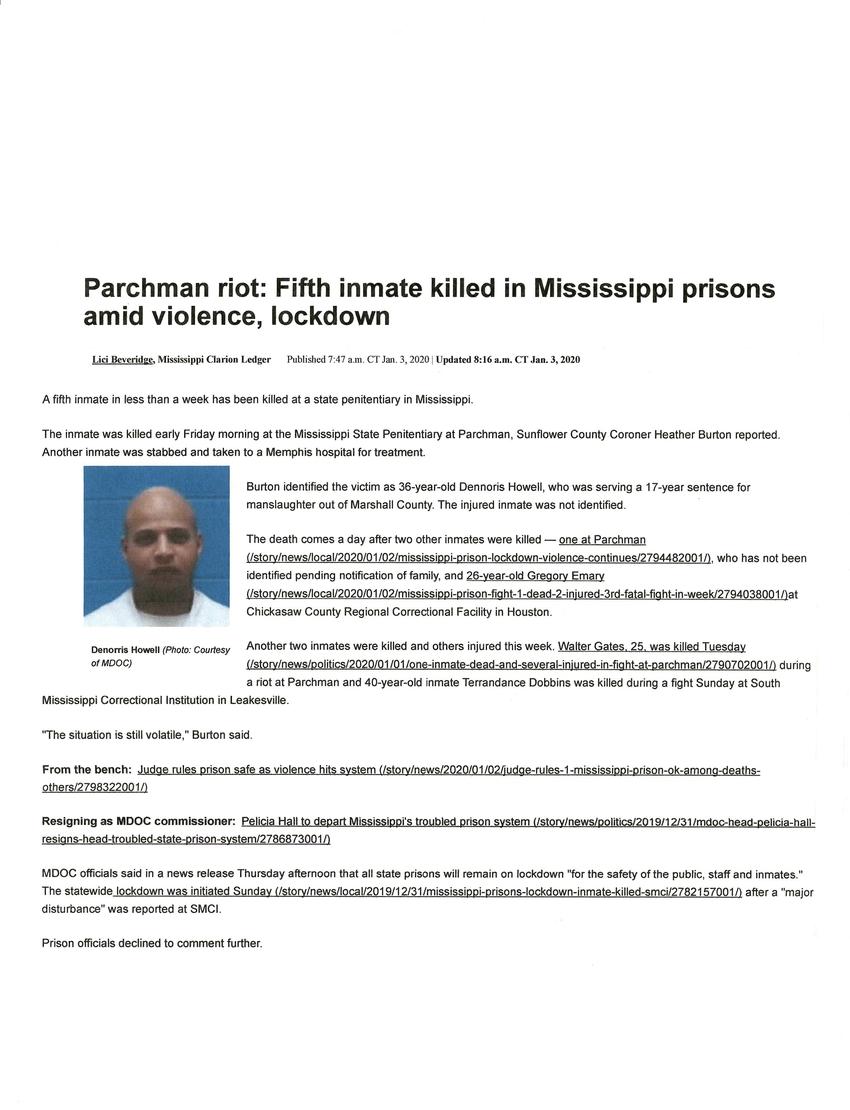 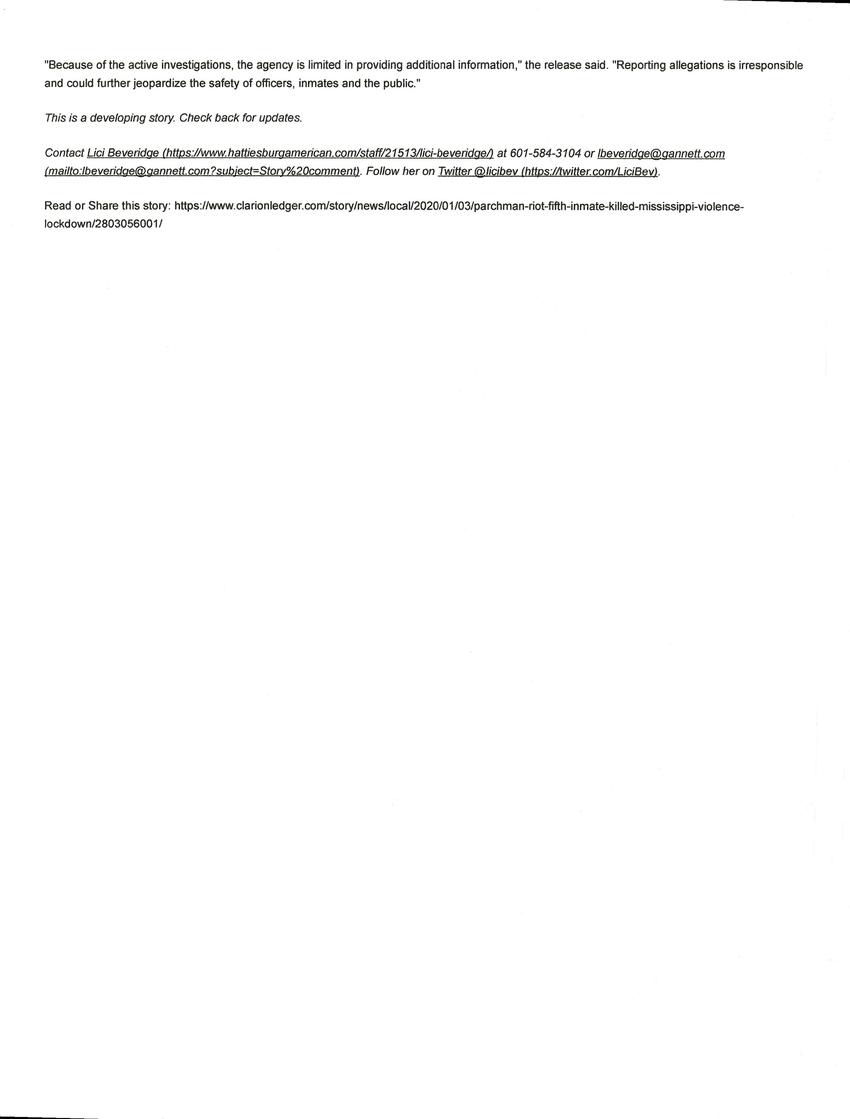 Five Mississippi inmates have been killed in less than a week, including three amid violence at the state Penitentiary at Parchman, where the local coroner says "gangs are at war."

Sunflower County Coroner Heather Burton said Friday the three killings in three days at Parchman is "unprecedented" in her 12 years in office.

Inmates and their families have contacted media including the Clarion Ledger, sending photos and videos and claiming violence is unchecked and smoke from fires has made it hard to breathe. The flurry of killings also brings renewed attention to funding and staffing shortages in the state prison system, where guards are sometimes paid around minimum wage.

Prison deaths: Inmates killed during Mississippi's prison violence: Who are they?

Mississippi Department of Corrections officials have offered minimal information since locking down the prison system Sunday after an inmate was killed in a South Mississippi prison.

A spokeswoman for Gov. Phil Bryant did not respond to a request for comment about the violence. On Friday evening, he posted about the situation on social media, saying he'd been in contact with prison officials throughout the week.

"The people who perpetrated this violence will be charged and brought to justice," Bryant wrote. "Gang violence will not be tolerated in state prisons or on our streets."

Gov.-elect Tate Reeves said he was briefed by prison officials on the violence Friday afternoon.

"Grateful to those working to restore order and safety," he wrote on social media. "That is the first priority. Then we need answers and justice on the people who perpetrated this violence. Any loss of life is tragic and must be addressed."

The latest death was Denorris Howell, 36, who was killed after sustaining a neck injury during a fight with his cellmate early Friday morning at Parchman, Burton said. He was serving a 17-year sentence for manslaughter in Marshall County. Burton said the inmate's cellmate was taken to a Memphis hospital to be treated for stab wounds from their fight.
Denorris Howell
Courtesy of MDOC

It was the third death at Parchman since New Year's Day, and the fifth killing at all Mississippi state prisons in less than a week.

On Thursday, two inmates were killed. One was a stabbing at Parchman. Roosevelt Holliman, 32, was killed in what Burton said was a gang-related riot. The second was 26-year-old Gregory Emary, who was killed at Chickasaw County Regional Correctional Facility in Houston.
Roosevelt Holliman
Courtesy of MDOC

Two additional inmates were killed with others injured earlier this week. Walter Gates, 25, died early Wednesday during a riot at Parchman. And Terrandance Dobbins, 40, was killed during a fight Sunday at South Mississippi Correctional Institution in Leakesville.

Rumors circulated on social media by inmates and families of additional killings at Parchman in recent days are not true, Burton said, but she added the situation inside the prison remained "volatile" on Friday.

“We are continuing to be vigilant and mindful of the situation," MDOC Commissioner Pelicia Hall said in a Friday statement. "These are trying times for the Mississippi Department of Corrections. It is never a good feeling for a commissioner to receive a call that a life has been lost, especially over senseless acts of violence.”

After six days of violence, MDOC confirmed Friday that some of the "major disturbances" at prisons across the state are gang-related. Officials said they would not name the gangs for security reasons.

For days, prison officials had refused to provide details on the violence and ignored most questions from media, with statements only describing the incidents as "major disturbances."

MDOC's statement Friday was its most substantive response yet, but remained light on details. It confirmed the five deaths but did not offer identities of the deceased. Officials claim that only four of the deaths were related to "major disturbances," or riots. The fifth death and a "minor fire" that broke out at Parchman are unrelated, officials said.

Hall announced she was stepping down earlier in the week as a new administration prepares to take over. In a statement, she said the understands "the public's right and need to know."

“But my department will not rush to release information for the sake of perpetuating rumors," Hall said. "Contrary to what is being said, we are providing information. There is a process to releasing accurate information and that takes time.”

She also warned against "misinformation" on social media, saying it was "fanning the flames." Cellphones smuggled into the prisons, she said, "have been instrumental in escalating the violence."

Prison officials added that open bay housing units are a challenge to manage because not all inmates are secure in single cells. Parchman inmates have been moved to "more secure housing units on prison grounds" to contain the violence. MDOC said all state prisons will remain on lockdown until further notice.
'Unprecedented' number of killings at Parchman

The rate of killings in Mississippi prisons over this past week is highly unusual. Burton, who has served as coroner since 2008, said that in all of 2019, her office responded to four homicides at the prison. From 2014 to 2018, an average of 3.4 inmate deaths were ruled homicides by prison officials each year, state data shows.

After the first Parchman death — which happened after midnight on New Year's Day — Burton was escorted into a unit that remained insecure following a "gang related riot," she wrote in a news release. She found the victim stabbed to death.

Late Thursday morning, she was called in for another fatal stabbing related to a gang related riot. And early Friday morning, she investigated an inmate who had fought with his cellmate and was stabbed to death. All three have been sent to the Mississippi State Medical Examiner's office in Pearl.

Burton said rumors abound and asked for members of the public to refrain from making statements or posting on social media based off hearsay. "I pray for a peaceful resolution to the situation to be found soon," she said.
Unclear how many injured

The Clarion Ledger has repeatedly asked MDOC how many inmates have been injured and has not received a response.

GerondaSue Skinner-Holmes said her son was stabbed in the eye on New Year's Eve during a fight at Parchman. MDOC didn't notify her of his injury for days, she said, and her son might lose an eye.

Skinner-Holmes awoke on New Year's Day to the news of the previous night's riot at Parchman, which Burton previously said lasted for several hours. "I haven't slept, haven't eaten (since)," Skinner-Holmes said.

Some inside the prison told Skinner-Holmes to check in on her son, who is housed in Unit 29, where much of the violence has centered. The unit has 1,568 beds and houses some of the system's worst offenders. Skinner-Holmes said she contacted prison officials to try to learn more, but she hasn't gotten much information.

"The people are understaffed and overworked," she said. "Ain't no way they can run the prison system with the people they have working there and as many inmates they got."

Another mother of a Parchman inmate hasn't heard from her son since Thursday and is sick with worry. "It is about to kill me," Tangie Viars said.

The last time she spoke to her son, who was originally imprisoned on a non-violent drug offense, there was a beating happening next to him, she said.

"He said, 'Mama, I just want to let you know I love you.' He's not a very big person so I told him 'Please, son, just stay your distance away from all that.'

"He said, 'It's to the point where you have to fight for your life. These guys are over here doing that as we speak.'"

Viars said she's sure her son is affiliated with gangs in prison. "I guess you have to be affiliated to live," she said.
Elected officials respond

The state has cut its overall spending on prisons over the past several years, the news outlet reported, even as the number of inmates has stayed the same. Hall previously said the state saved about $40 million since criminal justice legislation passed in 2014 and the incarceration rate went down somewhat. But she said that money was not reinvested into MDOC.

State Sen. Sampson Jackson II, D-Preston, chairman of the Senate Corrections Committee, said legislators need to address the low pay of guards, which has contributed to the severe shortage — and led to inmate-to-correctional officer ratios higher than other states and the national average. The starting salary for a correctional officer trainee is $25,650.

"People aren't going to work for minimum wage when they live in danger," Jackson told the Clarion Ledger on Friday. "That's the first thing we need to do" to address the prison violence problem, he added. The legislative session begins Tuesday.

Sen. Lydia Chassaniol, R-Winona, who also serves on the Corrections Committee, agreed guard pay was a central part of the problem. "There have been many studies and efforts to stem violence and improve the pay of corrections officers," she said in an email. "It seems more needs to be done."

Both Jackson and Chassaniol said they were not sure they would again be appointed to the Corrections Committee, and declined to discuss what specific legislation would look like, or how much guard wages should be increased.

"It's untenable to have individuals in an unsafe environment, and that's where we are," Lt. Gov.-elect Delbert Hosemann told the Clarion Ledger on Friday, adding he was "very concerned for the safety of everyone involved."

Hosemann said he's visited Parchman, including Unit 29, and talked with guards. Correctional officer pay is "one of" the major problems at the state's prisons "without question," he said. "A lot of them are working two, 12-hour shifts. Their compensation is not adequate."

"The first thing is to get the (prison) community safe," said Hosemann, who will oversee the state Senate in his new role. "Our guards safe, our prisoners need to be safe ... Going forward, obviously the governor will have to appoint a new head of corrections. You should anticipate that the Senate will also be devoting a lot of time to this issue."

Former Gov. Haley Barbour told the Clarion Ledger a central part of the problem remains a severely overcrowded prison system, and he said it has increased since his time in office. The state Parole Board, he said, should have "more activity" to help thin out the population.

"We have people in our prison system who don't need to be there, who are not threats, who are not dangerous," Barbour said. "A lot of them are in bad health. When I was governor, I let a lot of people out, I commuted their sentences, because they were in wheelchairs, they're dying, they have some terrible disease."

Update: Sunflower County Coroner Heather Burton said Denorris Howell, who died Friday, was not stabbed as she initially reported. He sustained a neck injury. His body is at the state crime lab in Pearl undergoing autopsy.