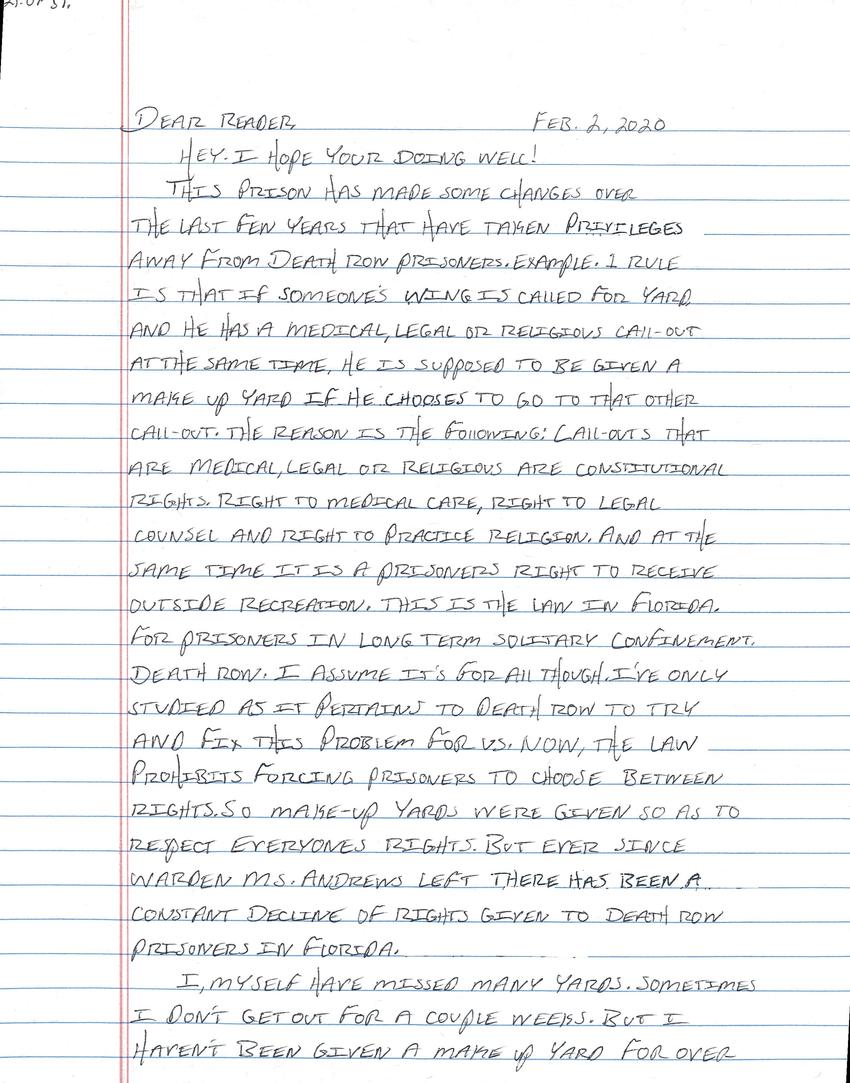 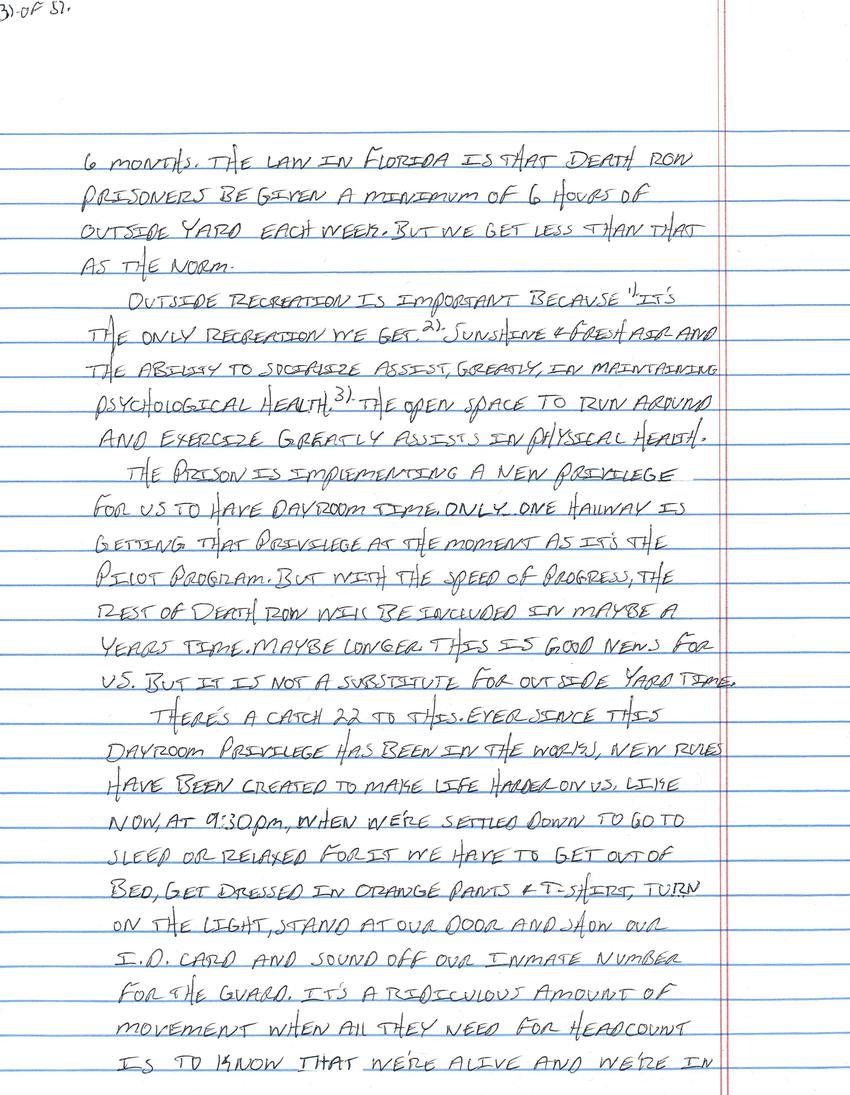 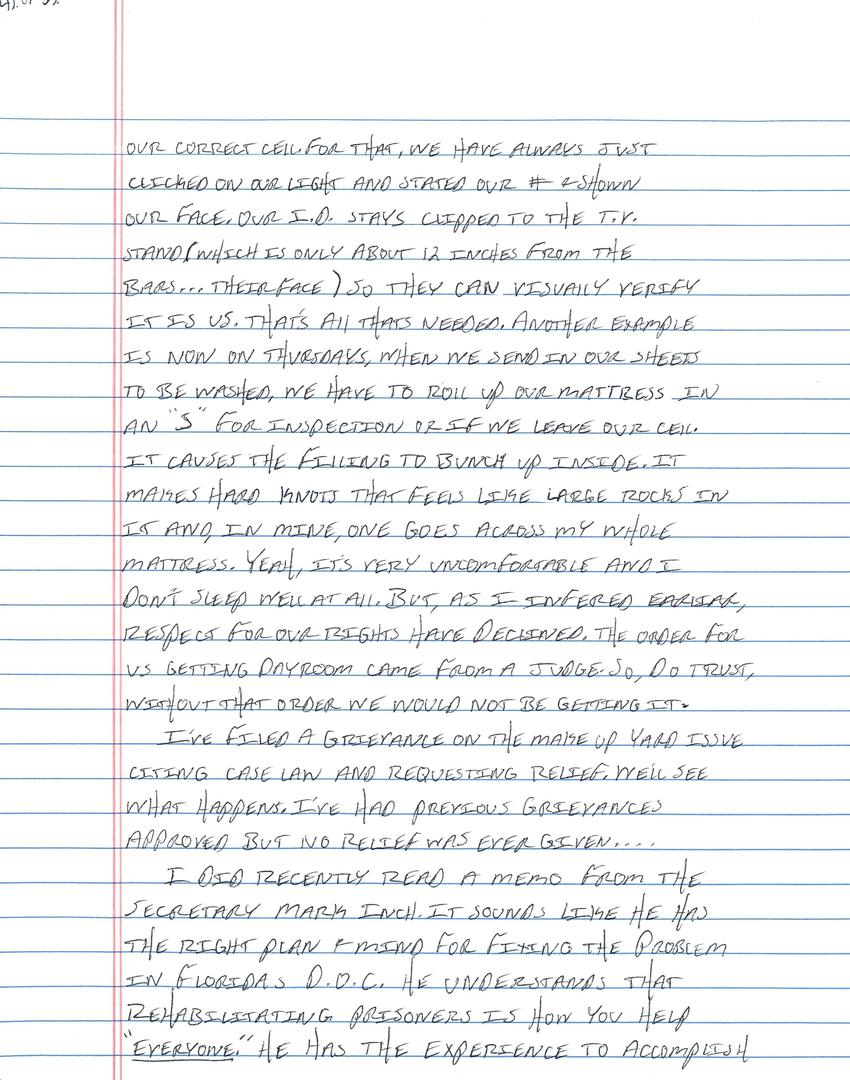 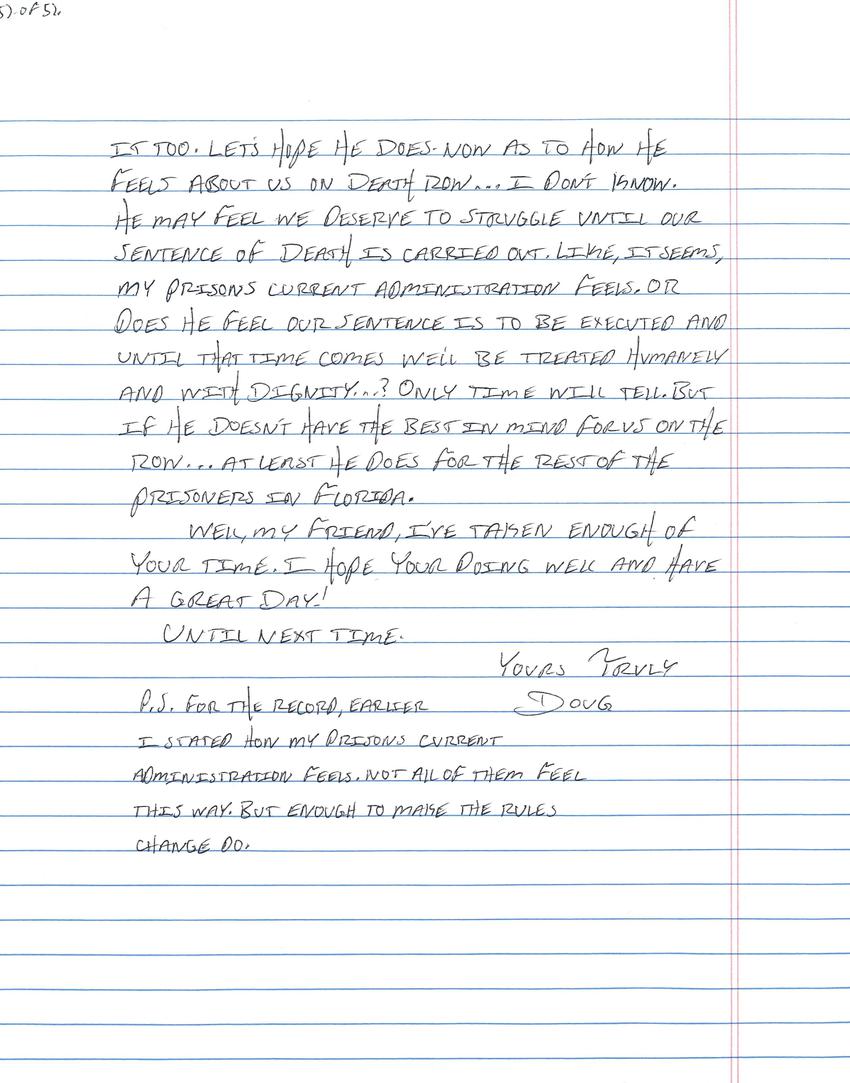 Hey. I hope you're doing well!

This prison has made some changes over the last few years that have taken priveledges away from death row prisoners. Example. 1 rule is that if someone's wing is called for yard and he has a medical, legal or religious call-out at the same time, he is supposed to be given a make-up yard if he chooses to go to that other call-out. The reason is the following: call-outs that are medical, legal or religious are constitutional rights. Right to medical care, right to legal counsel and right to practice religion. And at the same time, it is a prisoner's right to receive outside recreation. This is the law in Florida. For prisoners in long term solitary confinement, death row. I assume it's for all though. I've only studied as it pertains to death row to try and fix this problem for us. Now, the lay prohibits forcing prisoners to choose between rights. So make-up yards were given so as to respect everyone's rights. But ever since warden Ms Andrews left there has been a constant decline of rights given to death row prisoners in Florida.

I myself have missed many yards. Sometimes I don't get out for a couple of weeks. But I haven't been given a make-up yard for over 6 months. The law in Florida is that death row prisoners be given a minimum of 6 hours of outside yard each week. But we get less than that as the norm.

Outside recreation is important because it's the only recreation we get. Sunshine and fresh air and the ability to socialize assist greatly in maintaining psychological health. The open space to run around and exercize greatly assists in physical health.

The prison is implementing a new privilege for us to have dayroom time. Only one hallway is getting that privilege at the moment as it's the pilot program. But with the speed of progress, the rest of death row will be included in maybe a years time, maybe longer. This is good news for us, but it is not a substitute for outside yard time.

There's a catch 22 to this. Every since this dayroom privilege has been in the works, new rules have been created to make life harder on us. Like now, at 9:30 pm, when we're settled down to go to sleep or relaxed for it, we have to get out of bed, get dressed in orange pants and T-shirt, turn on the light, stand at our door and show our I.D. card and sound off our inmate number for the guard. It's a ridiculous amount of movement when all they need for headcount is to know that we're alive and we're in our correct cell. For that, we have always just clicked on our light and stated our number and shown our face. Our I.D. stays clipped to the T.V. stand (which is only about 12 inches from the bars... their face) so they can visually verify it is us. That's all that's needed. Another example is now on Thursdays, when we send in our sheets to be washed, we have to roll up our mattress in an "S" for inspection or if we leave our cell. It causes the filling to bunch up inside. It makes hard knots that feel like large rocks in it, and in mine, one goes across my whole mattress. Yeah, it's very uncomfortable and I don't sleep well at all. But, as I inferred earlier, respect for our rights have declined. The order for us getting dayroom came from a judge. So, do trust without out that order we would not be getting it.

I've filed a grievance on the make-up yard issue citing case law and requesting relief. We'll see what happens. I've had previous grievances approved but no relief was ever given...

I did recently read a memo from the secretary Mark Inch. It sounds like he has the right plan in mind for fixing the problem in Florida D.O.C. He understands that rehabilitating prisoners is how you help "everyone". He has the experience to accomplish it too. Let's hope he does. Now, as to how he feels about us on death row... I don't know. He may feel we deserve to struggle until our sentence of death is carried out, like it seems my prison's current administration feels. Or does he feel our sentence is to be executed and until that time comes we'll be treated humanely and with dignity...? Only time will tell. But if he doesn't have the best in mind for us on the row... At least he does for the rest of the prisoners in Florida.

Well, my friend, I've taken enough of your time. I hope you're doing well and have a great day!

P.S. For the record, earlier I stated how my prison's current administration feels. Not all of them feel this way. But enough to make the rules change do.

Hi Doug, thanks for writing and I really enjoyed hearing about your day! I finished the transcription for your post. I hope dayroom privilege is rolled out to your hall soon too and that action is taken about the make-up yard time grievance you filed! I am British so have little understanding of the US justice system but it doesn't seem right for people not to be able to go outside or get fresh air if they have medical, legal or religious reasons that prevent them from going at that time. Keep fighting for what you believe in. Hope you have a great day.
(scanned reply – view as blog post)
uploaded March 29, 2020.  Original (PDF) 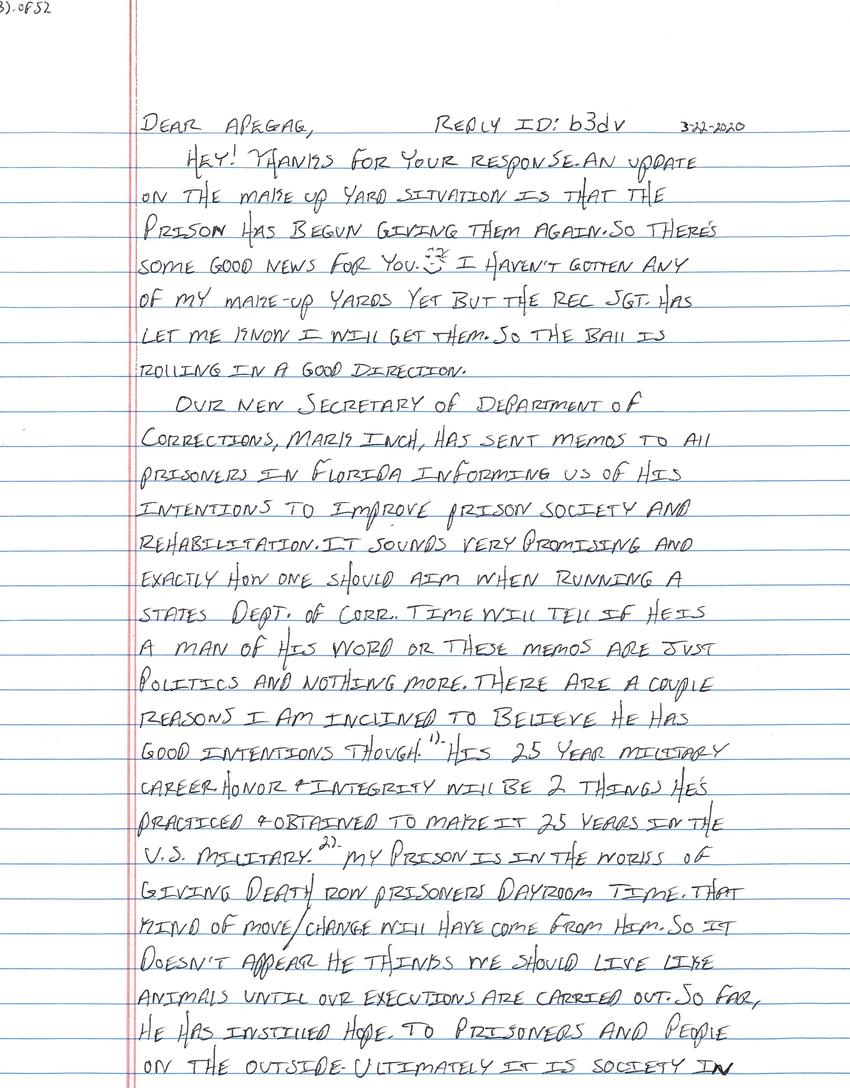 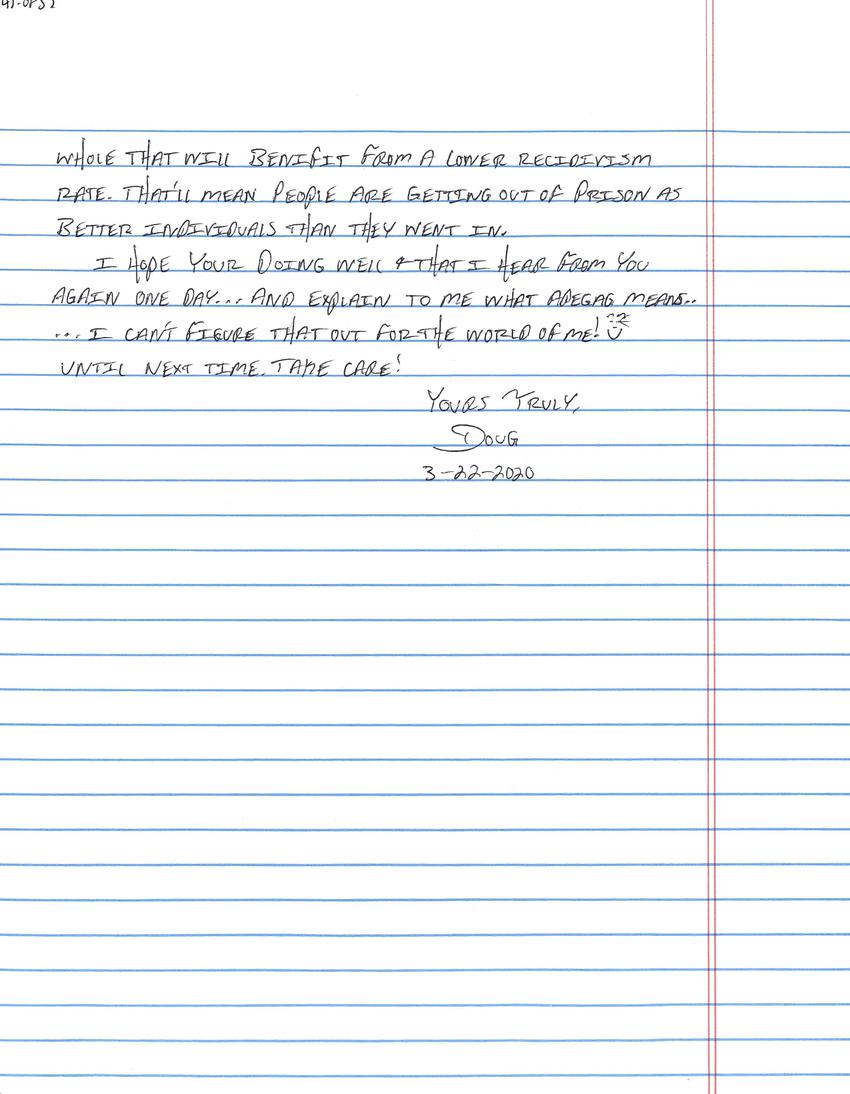