I am Still A Human Being 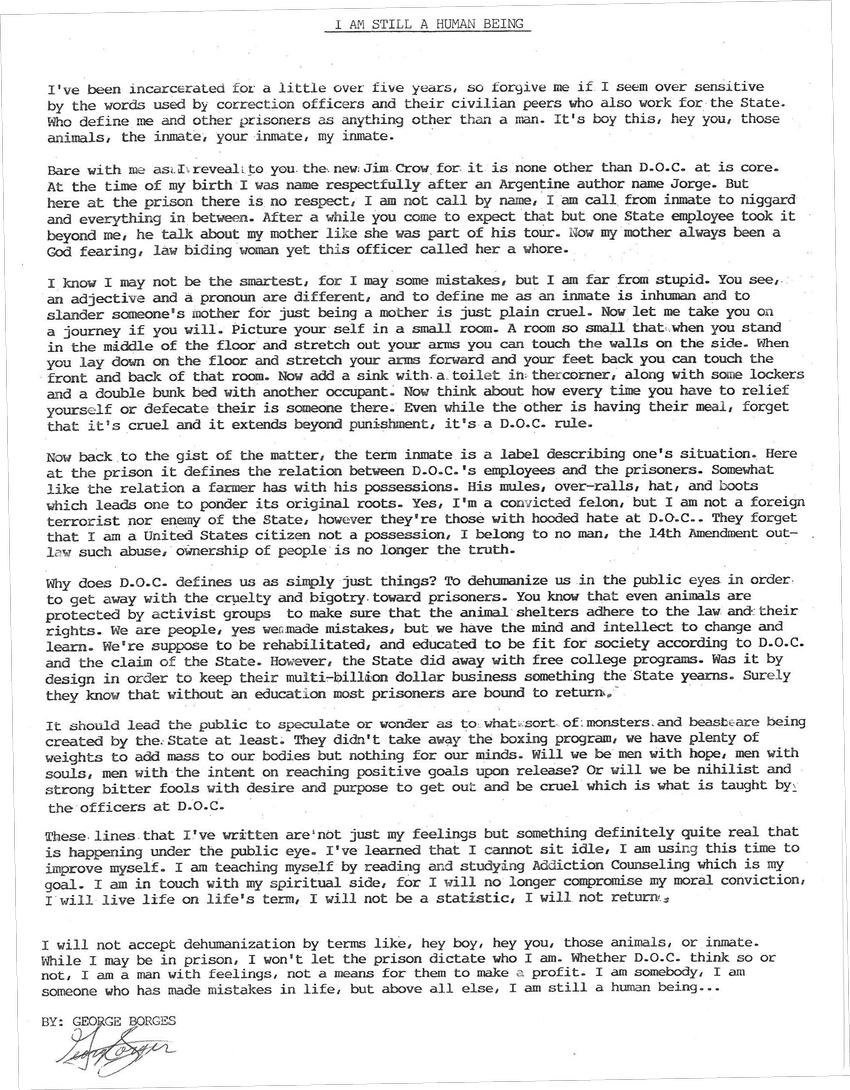 I AM STILL A HUMAN BEING

I've been incarcerated for a little over five years, so forgive me if I seem oversensitive by the words used by correction officers and their civilian peers who also work for the state. Who define me and other prisoners as anything other than a man. It's boy this, hey you, those animals, the inmate, your inmate, my inmate.

Bear with me as i reveal to you the new Jim Crow, for it is none other than DOC at its core. At the time of my birth I was named respectfully after an Argentine author named Jorge. But here at the prison there is no respect. I am not called by my name, I am called from inmate to niggard and everything in between. After awhile, you come to expect that. But one state employee took it beyond me. He talked about my mother like she was part of his tour. Now, my mother always been a God fearing, law abiding woman, yet this officer called her a whore.

I know I may not be the smartest for I make some mistakes, but I am far from stupid. You see, an adjective and a pronoun are different. To define me as an inmate is inhuman and to slander someone's mother for just being a mother is just plain cruel.

Let me take you on a journey, if you will. Picture yourself in a small room, a room so small that when you stand in the middle of the floor and stretch out your arms, you can touch the walls on the side. When you lay down on the floor and stretch your arms forward and your feet back, you can touch the front and back of that room. Now add a sink with a toilet in the corner, along with some lockers, and a double bunk bed with another occupant. Now think about how everything you have to relieve yourself or defecate, there is someone there. Even while the other is having their meal. Forget that it's cruel and extends beyond punishment. It's a DOC rule.

Back to the gist of the matter. The term inmate is a label describing one's situation. Here at the prison, it defines the relation between DOC's employees and the prisoners. Somewhat like the relation of a farmer and his possessions, his mules, overalls, hat, and boots. Which leads one to ponder its original roots. Yes, I'm a convicted felon but I am not a foreign terrorist nor enemy of the state. However, they're those with hooded hate at DOC. They forget that I am a United States citizen not a possession. I belong to no man. The 14th Amendment outlaws such abuse; ownership of people is no longer the truth.

Why does the DOC define us things? To dehumanize us in the public's eye and to get away with the cruelty and bigotry towards prisoners. You know that even animals are protected by activist groups to make sure that the animal shelters adhere to the law and their rights. We are people. Yes, we've made mistakes, but we have the mind and intellect to change and learn.

We're supposed to be rehabilitated and educated to be fit for society, according to the DOC and the state's claims. However, the state did away with the free college programs. Was it by design to keep their multi-billion dollar businesses? Surely, they know that without an education most prisoners are bound to return. It should lead the public to speculate as to what sort of monsters and beasts are being created by the state at least.

They didn't take away the boxing program. We have plenty of weights to add mass to our bodies, but nothing for our minds. Will we be men with hope, men with souls, men with intent on reaching positive goals upon release? Or will we be nihilist and strong, bitter fools with desire and purpose to get out and be cruel? That is taught by the officers at DOC.

These lines that I've written are not just my feelings but something definitely quite real that is happening under the public eye. I've learned that I cannot sit idle. I am using this time to improve myself. I am teaching myself by reading and studying addiction counseling, which is my goal. I am in touch with my spiritual side, for I will no longer compromise my moral conviction. I will live life on life's terms. I will not be a statistic. I will not return here.

I will not accept dehumanization by terms like hey boy, hey you, these animals, or inmate. While I may be in prison, I won't let the prison dictate who I am. Whether DOC thinks so or not, I am a man with feelings not a means for them to make a profit. I am somebody, I am someone who has made mistakes in life. But above all else, I am still a human being.