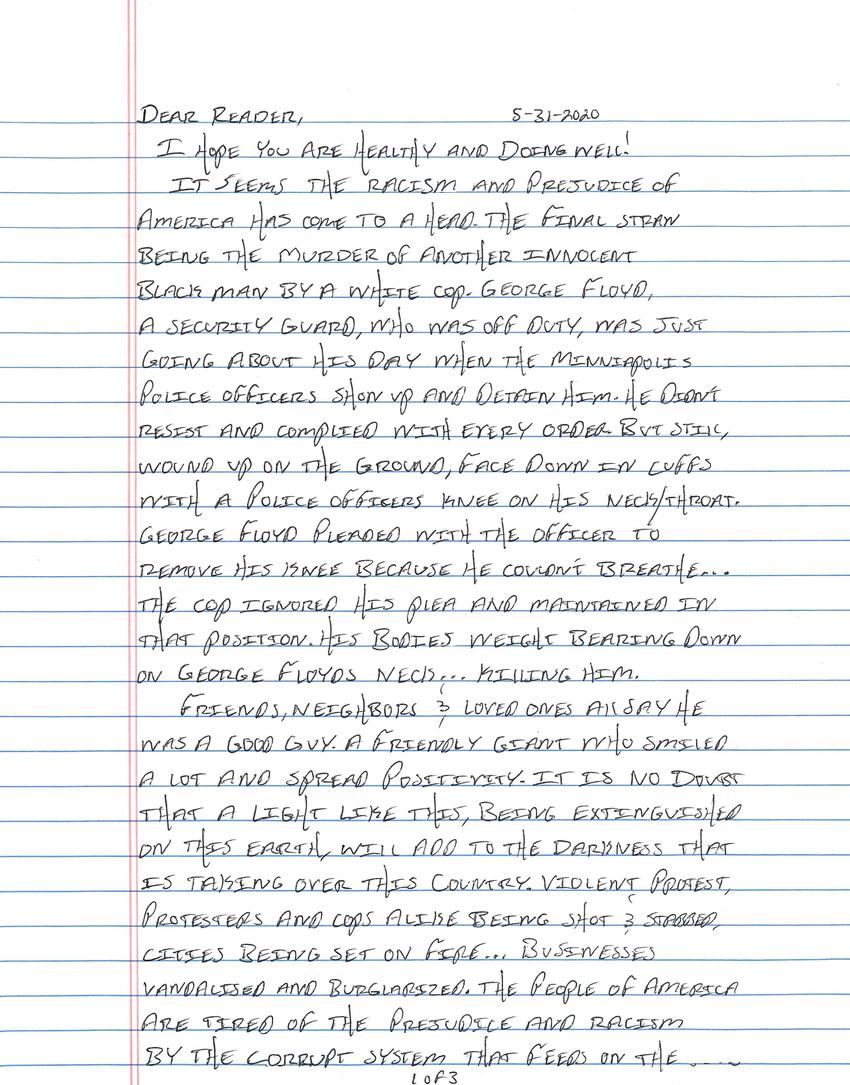 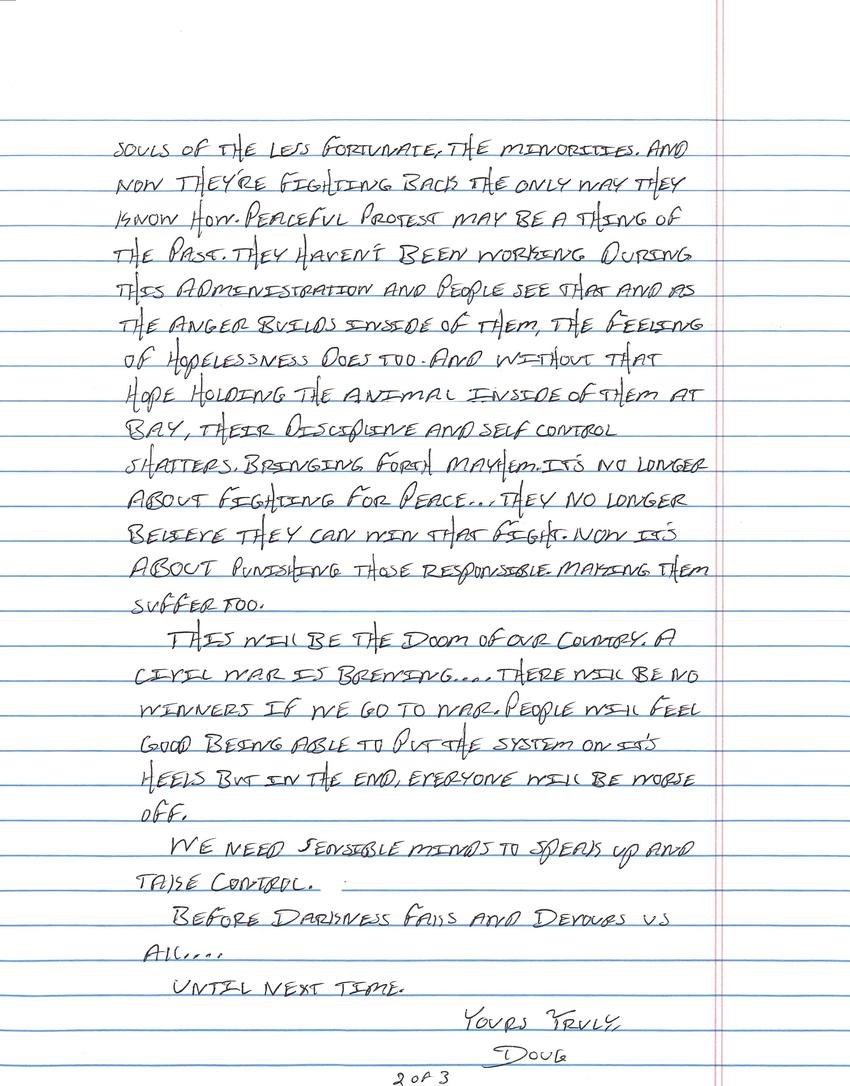 I hope you are healthy and doing well!

It seems the racism and prejudice of America has come to a head. The final straw being the murder of another innocent black man by a white cop. George Floyd, a security guard, who was off duty, was just going about his day when the Minneapolis police officers show up and detain him. He didn't resist and complied with every order. But still, wound up on the ground, face down in cuffs with a police officers knee on his neck/throat. George Floyd pleaded with the officer to remove his knee because he couldn't breathe...
The cop ignored his plea and maintained in that position. His bodies weight bearing down on George Floyds's neck...killing him.

Friends, neighbours & loved ones all say he was a good guy. A friendly giant who smiled a lot and spread positivity. It is no doubt that a light like this, being extinguished on this earth, will add to the darkness that is taking over this country. Violent protest, protesters and cops alike being shot & stabbed, cities being set on fire...businesses vandalised and burglarized. The people of America are tired of the prejudice and racism by the corrupt system that feeds on the souls of the less fortunate, the minorities. And now they're fighting back the only way they know how. Peaceful protest may be a thing of the past. They haven't been working during this administration and people see that and as the anger builds inside of them, the feeling of hopelessness does too. And without that hope holding the animal inside of them at bay, their discipline and self control shatters. Bringing forth mayhem. It's no longer about fighting for peace...they no longer believe they can win that fight. Now it's about punishing those responsible. Making them suffer too.

This will be the doom of our country. A civil war is brewing...there will be no winners if we go to war. People will feel good being able to put the system on its heels but in the end, everyone will be worse off.

We need sensible minds to speak up and take control.
Before darkness falls and devours us all...
Until next time.

Hi Doug,
Thanks for sharing your words. This is the first time I am replying to any prisoner. Your thoughts and feelings are very similar to mine, even though you are locked up and I'm out here. It's a shame that white people in this country are just learning about racism and police brutality -- as if it's something new! I am hoping that REAL change happens, but, you know, there were protests and riots a few years ago in Ferguson for Michael Brown and these things keep happening to black people. Since police officers cannot be sued in civil court for excessive force, as I'm sure you know, I hope that a law passes to allow police officers to be held accountable.
I do feel somewhat bad for some "good cops" because I know a few who really help their communities. But it's really the system as a whole. And I can't help but wonder if all these white people saying "Black Lives Matter" will fade away when it's not cool or trendy anymore. Will these people forget?
I am not black, but I am multi-racial. And I have a small business as a dog-walker / pet sitter. On my instagram page, I shared a photo one of my clients sent me... it was of her dog sitting next to chalk on a sidewalk that said "Black Lives Matter." The next day, I saw my instagram account lost 30 followers! I am assuming they unfollowed me because they did not like the sharing of "Black Lives Matter." It is a shame that people react that way.
Any way, I hope the US and the world begin to be tolerant of others, and then eventually ACCEPTING of all people.
And I hope you are doing OK with the whole coronavirus. I hear it has been tough in prisons with it spreading around.
--De
Thanks for writing! I worked on the transcription for your post

I just want to mention how touched I am by your letter because it is such a relevant and important topic. You have worded such a saddening topic in such an intelligent way, getting straight to point, but in a way that is easy to understand and agree with.

Thank you so much for writing this. It really goes to show that everyone needs to read and talk about a subject that is a significant problem, just only now is everyone fully responding in such a powerful way.

I hope that you are doing alright, and hopefully, continue writing about the way you see the world and communicate your emotions to people like me. 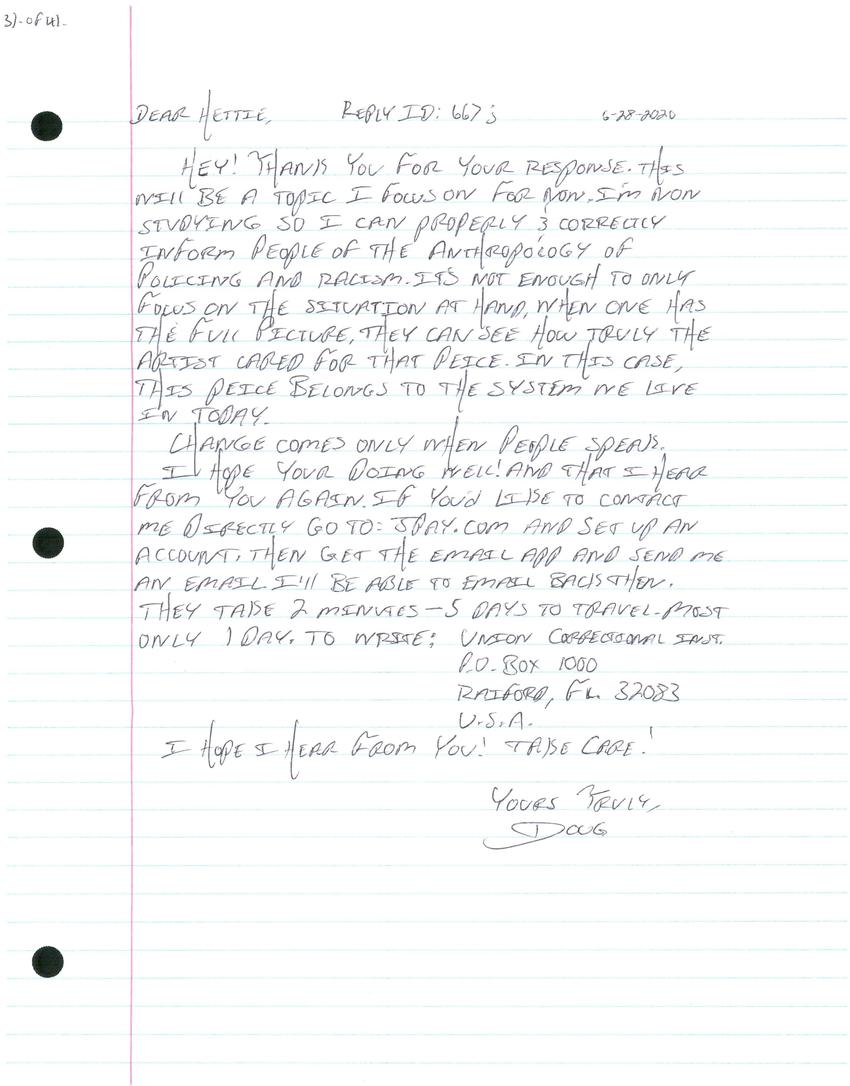 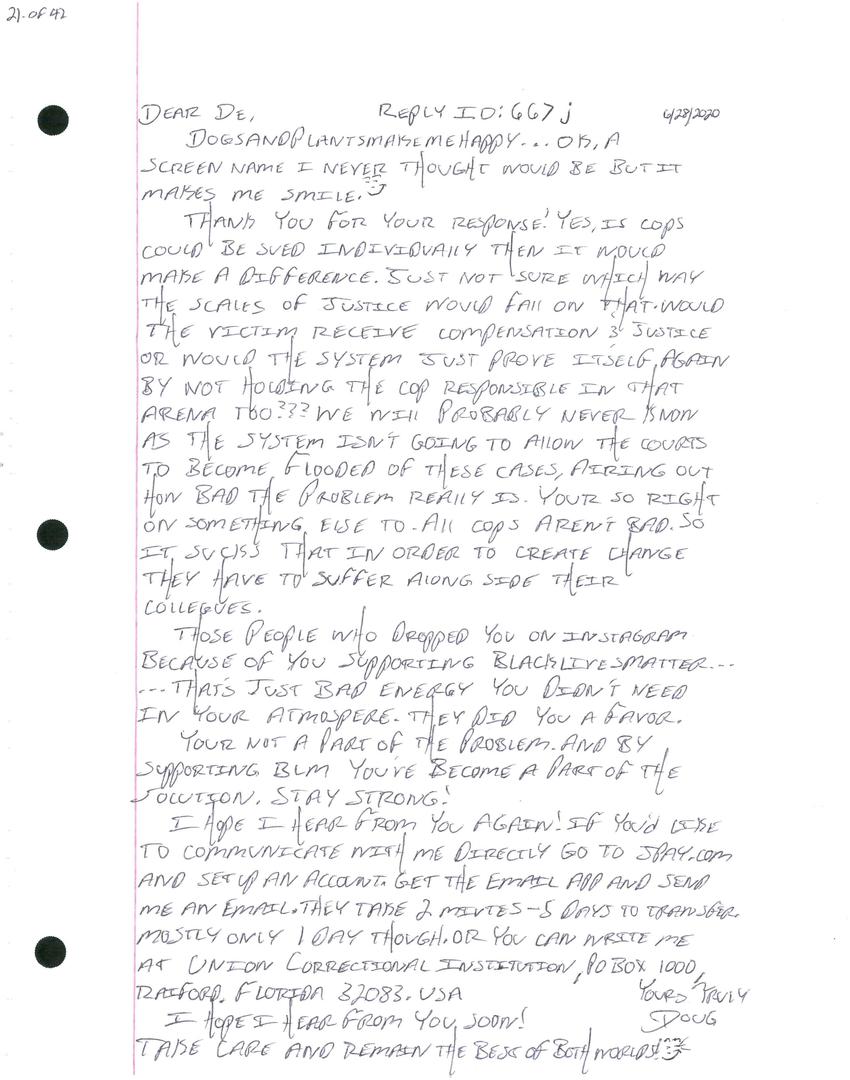