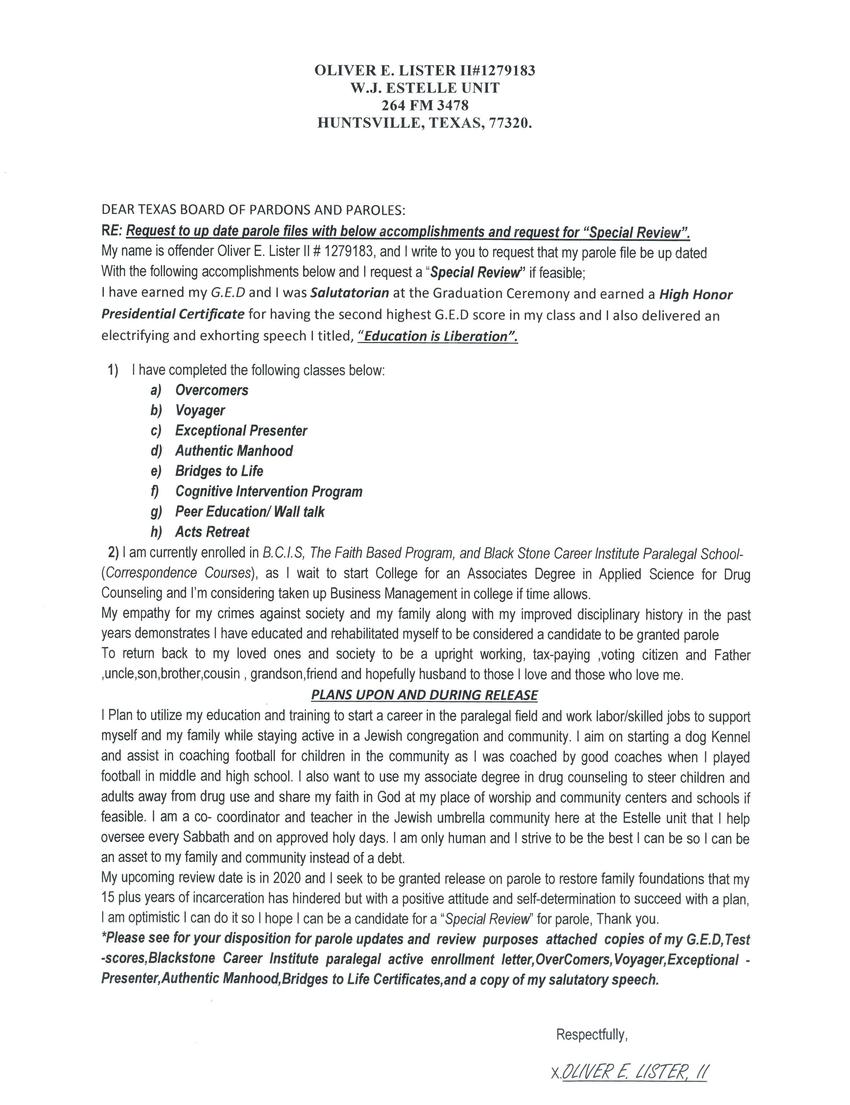 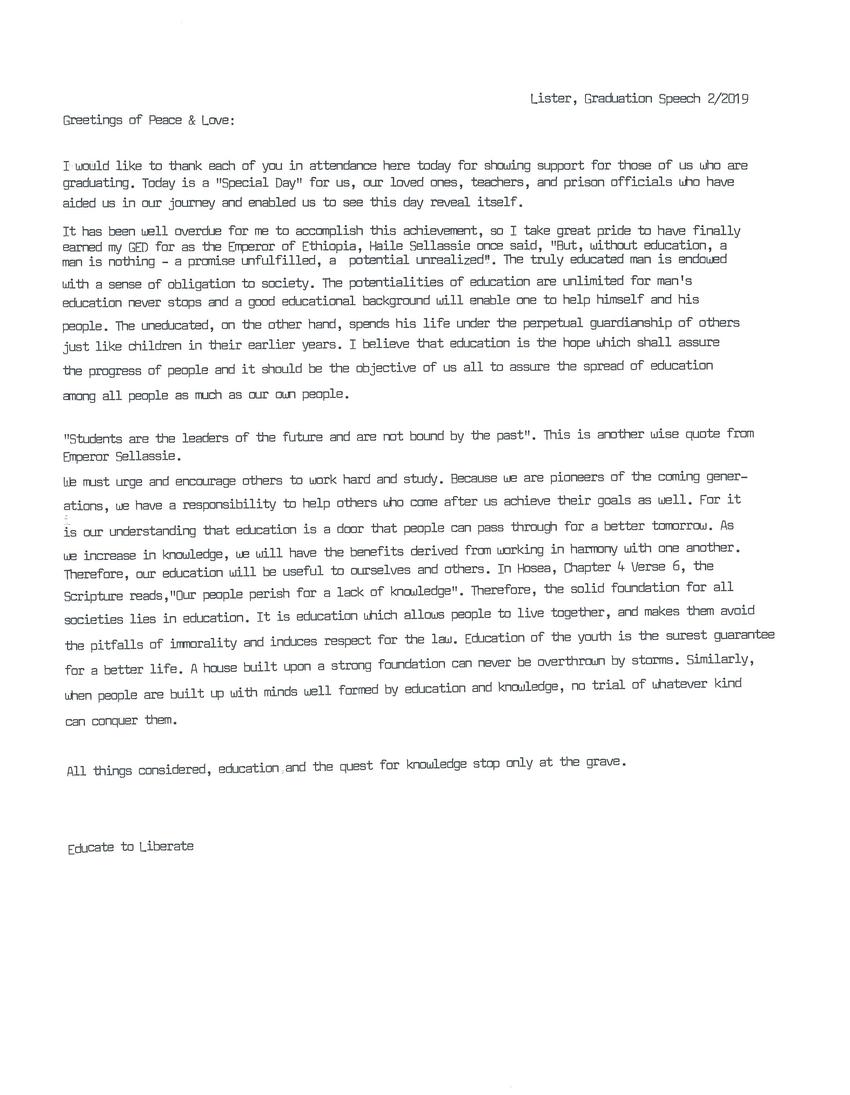 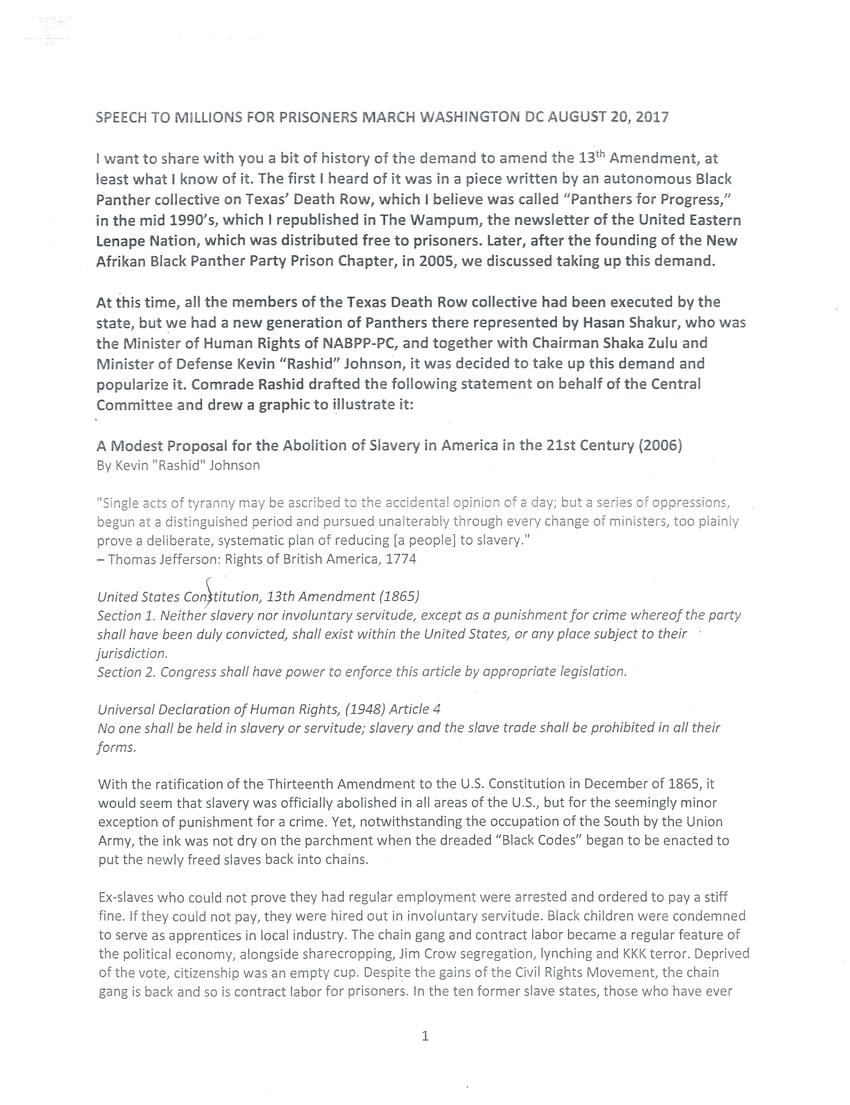 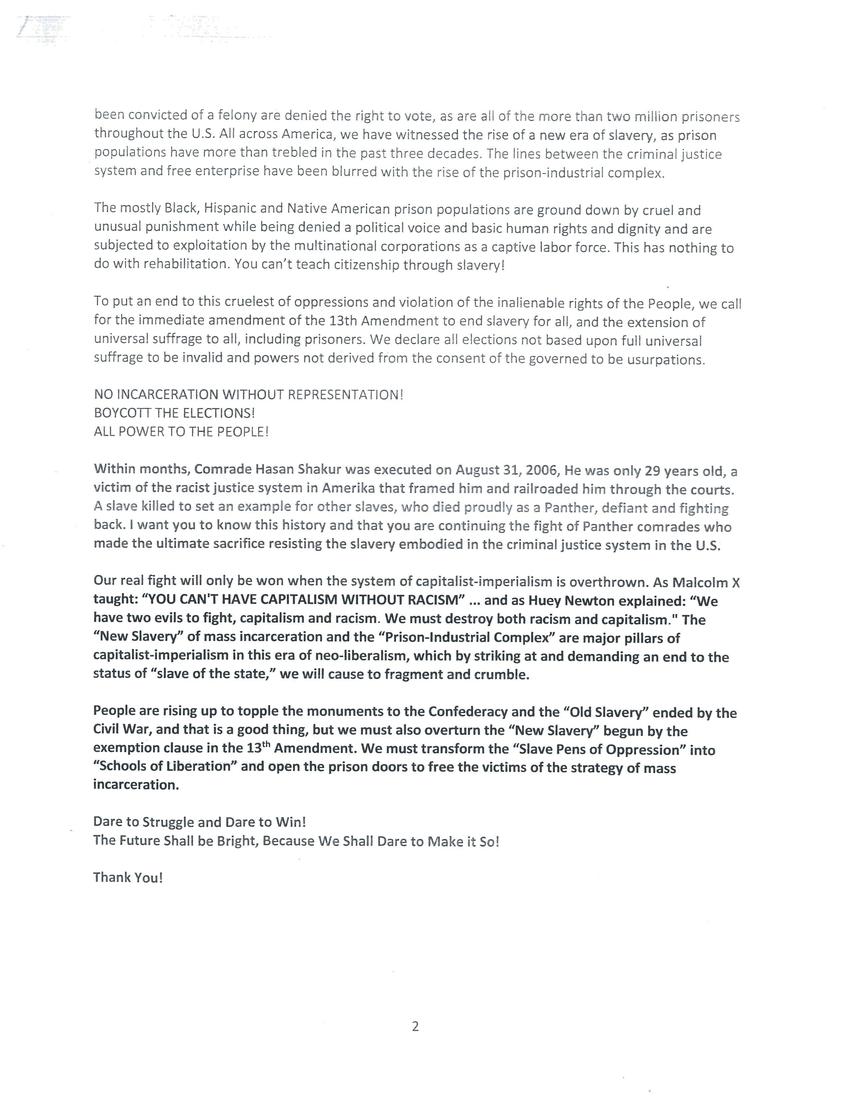 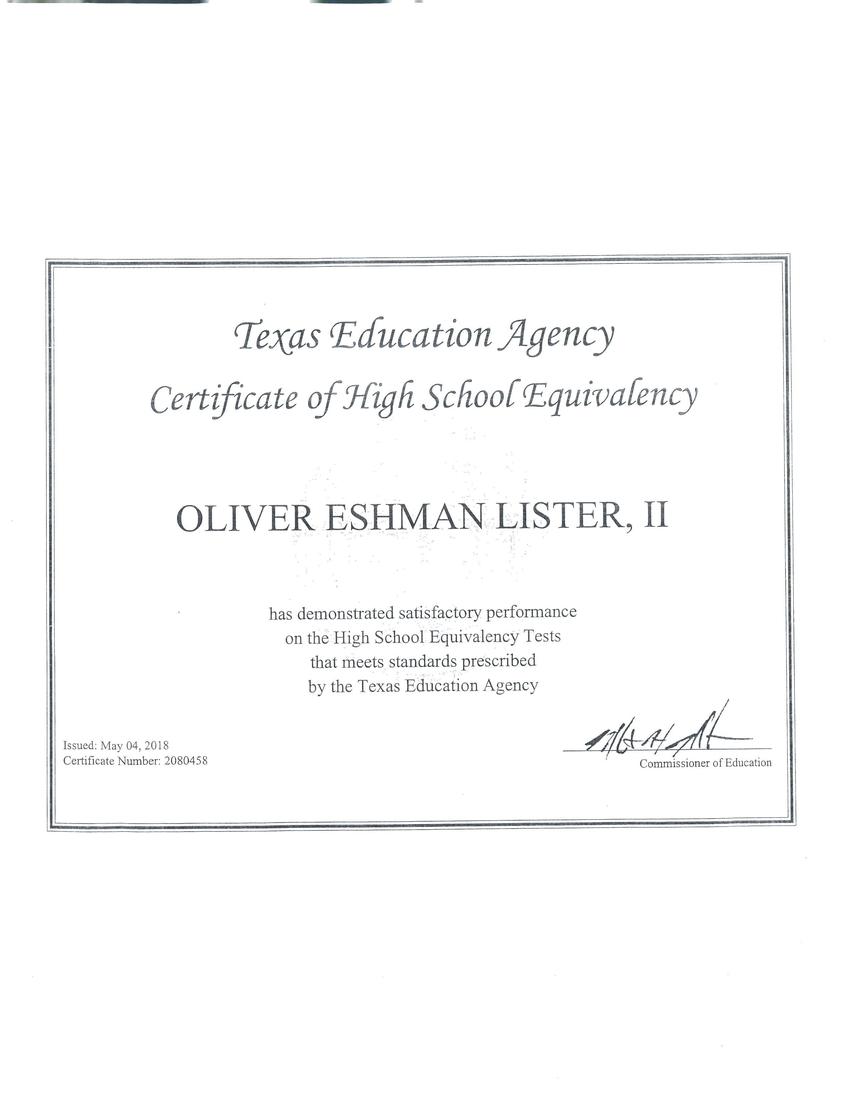 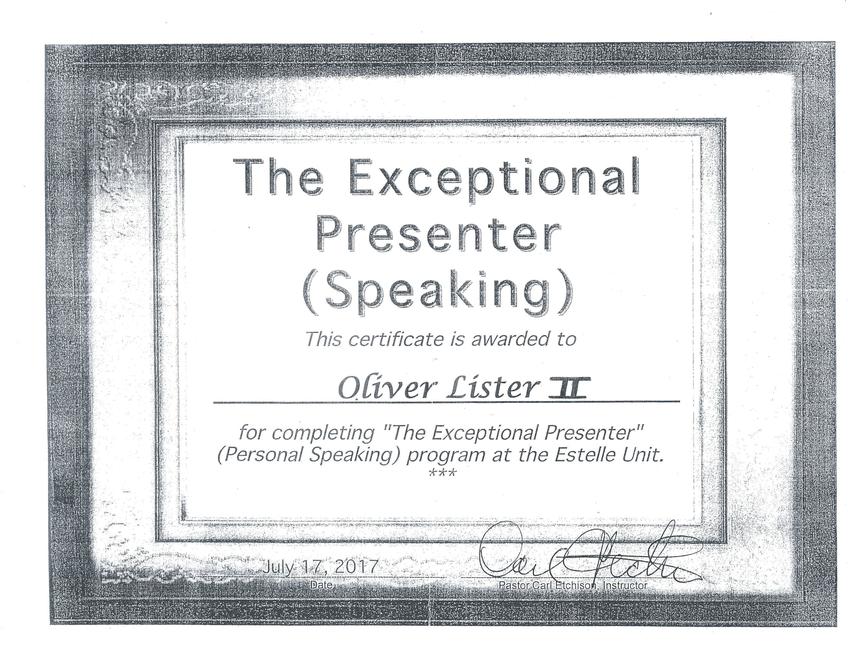 DEAR TEXAS BOARD OF PARDONS AND PAROLES
RE: Request to update parole files with below accomplishments and request for "Special Review".
My name is offender Oliver E. Lister II # 1279183, and I write to you to request that my parole file be updated
With the following accomplishments below and I request a "Special Review" if feasible;
I have earned my G.E.D. and I was Salutatorian at the Graduation Ceremony and earned a High Honor
Presidential Certificate for having the second-highest G.E.D. score in my class and I also delivered an
electrifying and exhorting speech I titled, "Education is Liberation".

2) I am currently enrolled in B.C.I.S, The Faith-Based Program, and Black Stone Career Institute Paralegal School-
(Correspondence Courses), as I wait to start College for an Associates Degree in Applied Science for Drug
Counseling and I'm considering taking up Business Management in college if time allows.
My empathy for my crimes against society and my family along with my improved disciplinary history in the past
years demonstrates I have educated and rehabilitated myself to be considered a candidate to be granted parole
To return back to my loved ones and society to be an upright working, tax-paying, voting citizen and Father
, uncle, son, brother, cousin, grandson, friend, and hopefully husband to those I love and those who love me.
PLANS UPON AND DURING RELEASE
I Plan to utilize my education and training to start a career in the paralegal field and work labor/skilled jobs to support
myself and my family while staying active in a Jewish congregation and community. I aim on starting a dog Kennel
and assist in coaching football for children in the community as I was coached by good coaches when I played
football in middle and high school. I also want to use my associate degree in drug counseling to steer children and
adults away from drug use and share my faith in God at my place of worship and community centers and schools if
feasible. I am a co-coordinator and teacher in the Jewish umbrella community here at the Estelle unit that I help
oversee every Sabbath and on approved holy days. I am only human and I stove to be the best I can be so I can be
an asset to my family and community instead of a debt.
My upcoming review date is in 2020 and I seek to be granted release on parole to restore family foundations that my
15 plus years of incarceration has hindered but with a positive attitude and self-determination to succeed with a plan,
I am optimistic I can do it so I hope I can be a candidate for a "Special Review" for parole, Thank you.
*Please see for your disposition for parole updates and review purposes attached copies of my G.E.D., Test
-scores, Blackstone Career Institute paralegal active enrollment letter, OverComers, Voyager, Exceptional -
Presenter, Authentic Manhood, Bridges to Life Certificates, and a copy of my salutatory speech.

I would like to thank each of you in attendance here today for showing support for those of us who are graduating. Today is a "Special Day" for us, our loved ones, teachers, and prison officials who have aided us in our journey and enabled us to see this day reveal itself.

It has been well overdue for me to accomplish this achievement, so I take great pride to have finally earned my GED for as the Emperor of Ethiopia, Haile Sellassie once said, "But, without education, a man is nothing - a promise unfilled, a potential unrealized". The truly educated man is endowed with a sense of obligation to society. The potentialities of education are unlimited for man's education never stops and a good educational background will enable one to help himself and his people. The uneducated, on the other hand, spends his life under the perpetual guardianship of others just like children in their earlier years. I believe that education is the hope which shall assure the progress of people and it should be the objective of us all to assure the spread of education among all people as much as our own people.

"Students are the leaders of the future and are not bound by the past". This is another wise quote from Emperor Sellassie.
We must urge and encourage others to work hard and study. Because we are pioneers of the coming generations, we have a responsibility to help others who come after us achieve their goals as well. For it is our understanding that education is a door that people can pass through for a better tomorrow. As we increase in knowledge, we will have the benefits derived from working in harmony with one another. Therefore, our education will be useful to ourselves and others. In Hosea, Chapter 4 Verse 6, the Scripture reads, "Our people perish for a lack of knowledge". Therefore, the solid foundation for all societies lies in education. It is education which allows people to live together, and makes them avoid the pitfalls of immorality and induces respect for the law. Education of the youth is the surest guarantee for a better life. A house built upon a strong foundation can never be overthrown by storms. Similarly, when people are built up with minds well formed by education and knowledge. no trial of whatever kind can conquer them.

All things considered, education and the quest for knowledge stop only at the grave.

I want to share with you a bit of history of the demand to amend the 13th Amendment, at least what I know of it. The first I heard of it was in a piece written by an autonomous Black Panther collective on Texas' Death Row, which I believe was called "Panthers for Progress," in the mid 1990's, which was distributed free to prisoners. Later, after the founding of the New Afrikan Black Panther Party Prison Chapter, in 2005, we discussed taking up this demand.

AT this time, all the members of the Texas Death Row collective had been executed by the state, but we had a new generation of Panthers there represented by Hasan Shakur, who was the minister of Human Rights of NABPP-PC, and together with Chairman Shaka Zulu and Minister of Defense Kevin "Rashid" Johnson, it was decided to take up this demand and popularize it. Comrade Rashid drafter the following statement on behalf of the Central Committee and drew a graphic to illustrate it:

“Single acts of tyranny may be ascribed to the accidental opinion of a day; but a series of oppressions, begun at a distinguished period and pursued unalterably through every change of ministers, too plainly prove a deliberate, systematic plan of reducing [a people] to slavery.” – Thomas Jefferson: Rights of British America, 1774

United States Constitution, 13th Amendment
“Section 1. Neither slavery nor involuntary servitude, except as a punishment for crime whereof the party shall have been duly convicted, shall exist within the United States, or any place subject to their jurisdiction.
“Section 2. Congress shall have power to enforce this article by appropriate legislation.”

Universal Declaration of Human Rights, Article 4
“No one shall be held in slavery or servitude; slavery and the slave trade shall be prohibited in all their forms.”

With the ratification of the 13th Amendment to the U.S. Constitution in December of 1865, it would seem that slavery was officially abolished in all areas of the U.S., but for the seemingly minor exception of punishment for a crime. Yet, notwithstanding the occupation of the South by the Union Army, the ink was not dry on the parchment when the dreaded “Black Codes” began to be enacted to put the newly freed slaves back into chains.

Ex-slaves who could not prove they had regular employment were arrested and ordered to pay a stiff fine. If they could not pay, they were hired out in involuntary servitude.
Black children were condemned to serve as apprentices in local industry. The chain gang and contract labor became a regular feature of the political economy, alongside sharecropping, Jim Crow segregation, lynching and KKK terror.
Deprived of the vote, citizenship was an empty cup. Despite the gains of the Civil Rights Movement, the chain gang is back, and so is contract labor for prisoners. In the 10 former slave states, those who have ever been convicted of a felony are denied the right to vote, as are all of the more than 2 million prisoners throughout the U.S.All across America, we have witnessed the rise of a new era of slavery, as prison populations have more than tripled in the past three decades. The lines between the criminal justice system and free enterprise have been blurred with the rise of the prison-industrial complex.

The mostly Black, Hispanic and Native American prison populations are ground down by cruel and unusual punishment while being denied a political voice and basic human rights and dignity and are subjected to exploitation by multinational corporations as a captive labor force. This has nothing to do with rehabilitation. You can’t teach citizenship through slavery!

To put an end to this cruelest of oppressions and violation of the inalienable rights of the People, we call for the immediate amendment of the 13th Amendment to end slavery for all, and the extension of universal suffrage to all, including prisoners.
We declare all elections not based upon full universal suffrage to be invalid and powers not derived from the consent of the governed to be usurpations.

NO INCARCERATION WITHOUT REPRESENTATION!

ALL POWER TO THE PEOPLE!

Within months, Comrade Hasan Shakur was executed on August 31, 2006, He was only 29 years old, a victim of the racist justice system in Amerika that framed him and railroaded him through the courts. A slave killed to set an example for other slaves, who died proudly as a Panther, defiant and fighting back. I want you to know this history and that you are continuing the fight of Panther comrades who made the ultimate sacrifice testing the slavery embodied in the criminal justice system in the U.S.

OOur real fight will only be won when the system of capitalist-imperialism is overthrown. As Malcolm X taught: "YOU CAN'T HAVE CAPITALISM WITHOUT RACISM" ... and as Huey Newton explained: "We have two evils to fight, capitalism and racism. We must destroy both racism and capitalism." The "New Slavery" of mass incarceration and the "Prison-Industrial Complex" are major pillars of capitalist-imperialism in this era of neo-liberalism, which by striking at and demanding an end to the status of "slave of the state," we will cause to fragment and crumble.

People are rising up to topple the monuments to the Confederacy and the "Old Slavery" ended by the Civil War, and that is a good thing, but we must also overturn the "New Slavery" begun by the exemption clause in the 13th Amendment. We must transform the "Slave Pens of Oppression" into "Schools of Liberation" and open the prison doors to free the victims of the strategy of mass incarceration.

Dare to struggle and Dare to Win!
The Future Shall be Bright, Because We Shall Dare to Make it So!