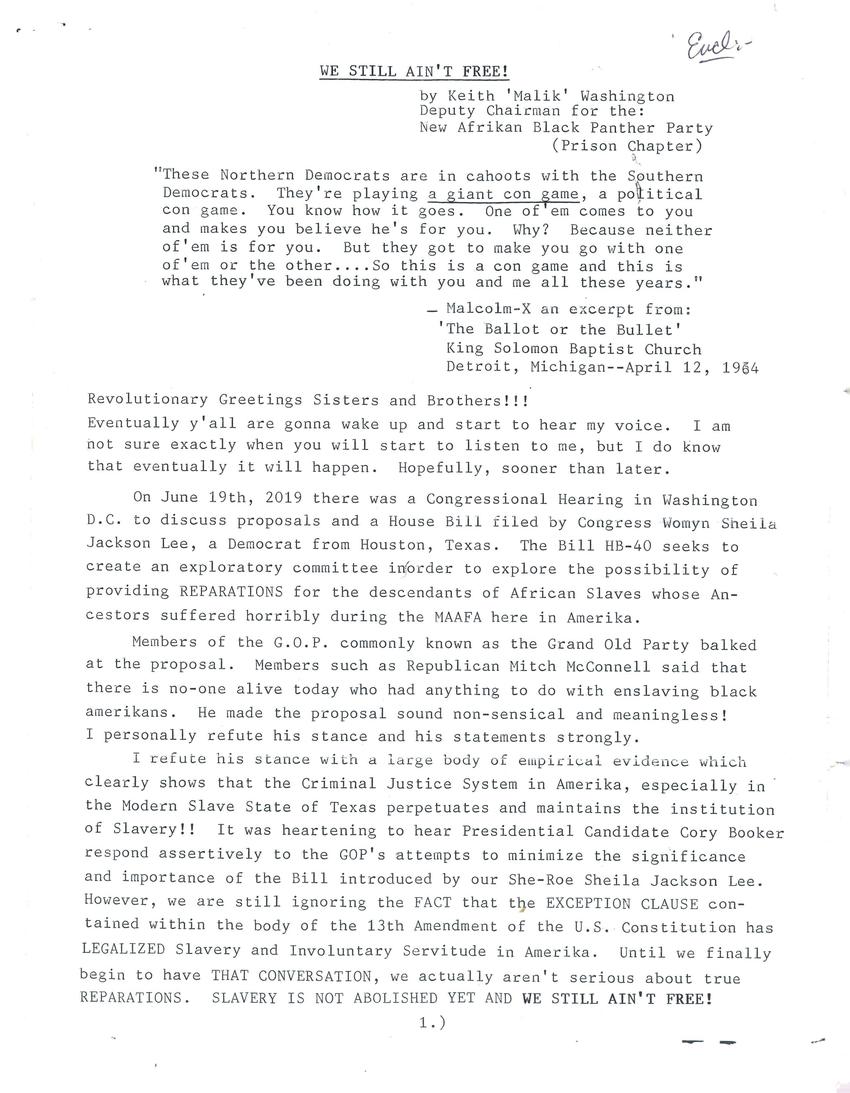 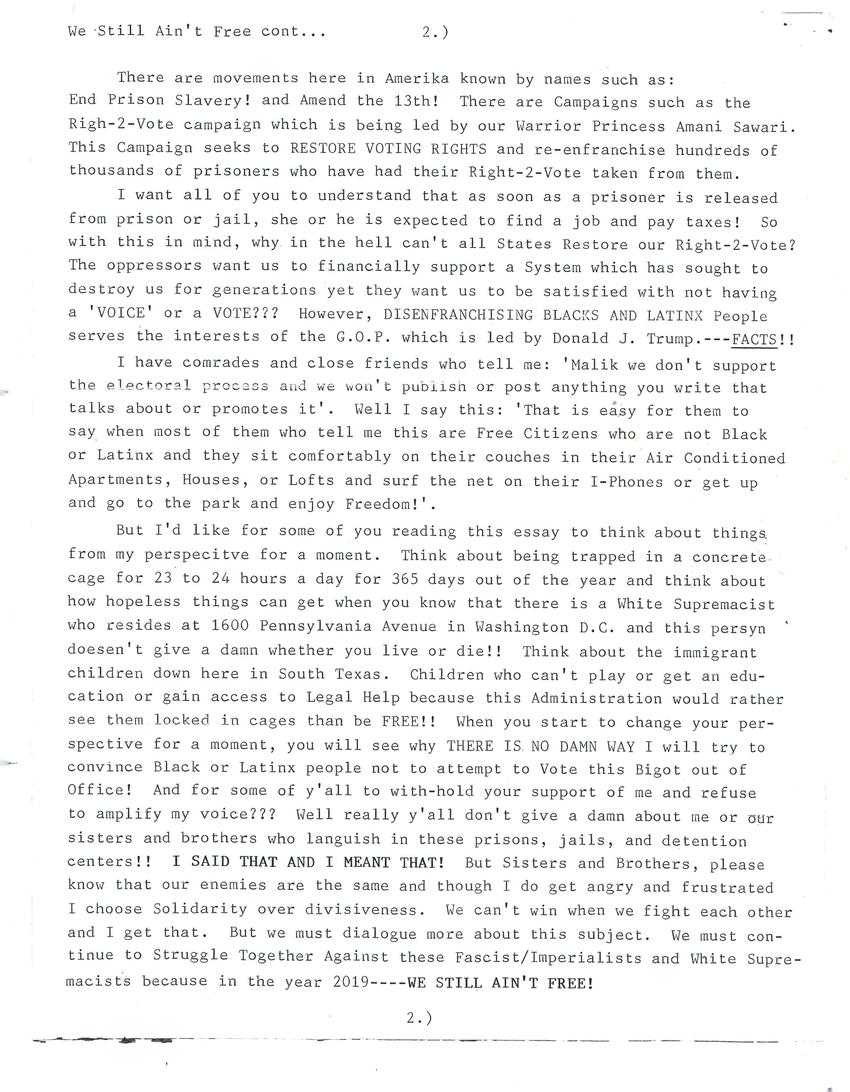 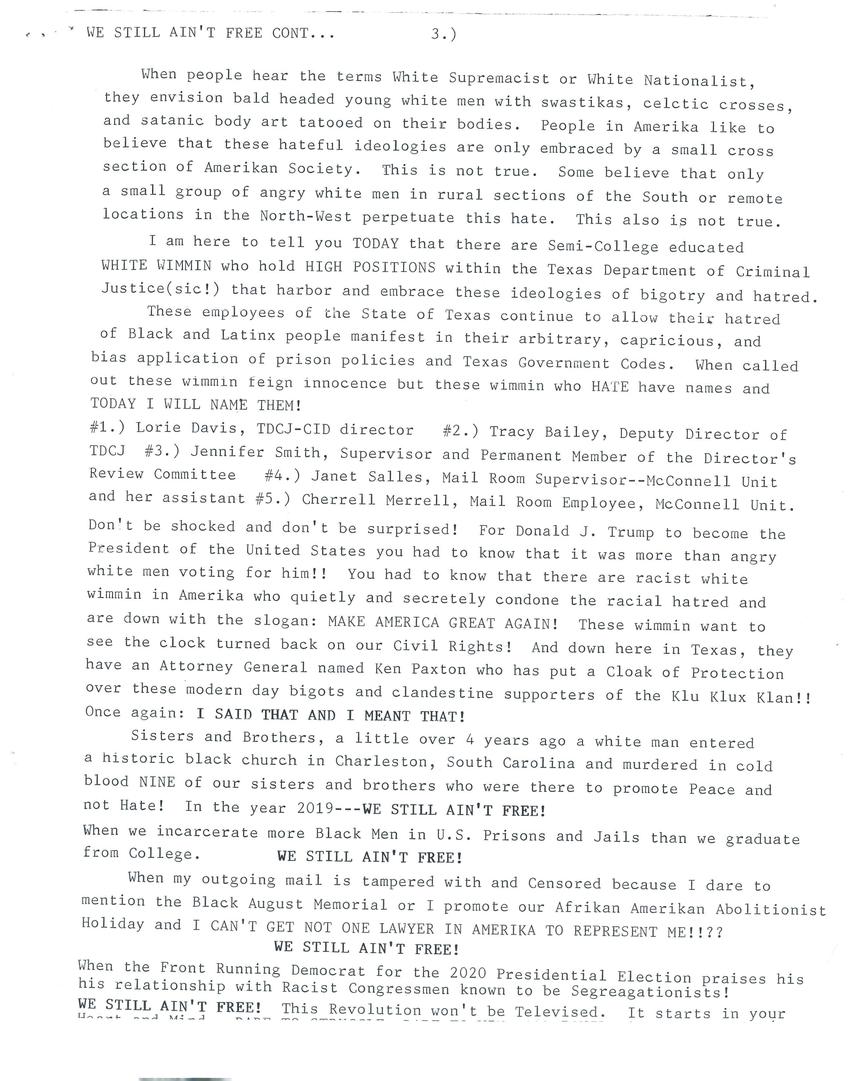 "These Northern Democrats are in cahoots with the Southern Democrats. They're playing a giant con game, a political con game. You know how it goes. One of 'em comes to you and makes you believe he's for you. Why? Because neither of 'em is for you. But they got to make you go with one of 'em or the other....So this is a con game and this is what they've been doing with you and me all these years."
- Malcolm-X an excerpt from:
'The Ballot or the Bullet'
King Solomon Baptist Church
Detroit, Michigan--April 12, 1964

Revolutionary Greetings Sisters and Brothers!!!
Eventually y'all are gonna wake up and start to hear my voice. I am not sure exactly when you will start to listen to me, but I do know that eventually it will happen. Hopefully, sooner than later.

On June 19th, 2019 there was a Congressional Hearing in Washington D.C. to discuss proposals and a House Bill filed by Congress Womyn Sheila Jackson Lee, a Democrat from Houston, Texas. The Bill HB-40 seeks to create an exploratory committee in order to explore the possibility of providing REPARATIONS for the descendants of African Slaves whose Ancestors suffered horribly during the MAAFA here in Amerika.

Members of the G.O.P commonly known as the Grand Old Party balked at the proposal. Members such as Republican Mitch McConnell said that there is no-one alive today who had anything to do with enslaving black amerikans. He made the proposal sound non-sensical and meaningless! I personally refute his stance and his statements strongly.

I refute his stance with a large body of empirical evidence which clearly shows that the Criminal Justice System in Amerika, especially in the Modern Slave State of Texas perpetuates and maintains the institution of Slavery!! It was heartening to hear Presidential Candidate Cory Booker respond assertively to the GOP's attempts to minimize the significance and importance of the Bill introduced by our She-Roe Sheila Jackson Lee. However, we are still ignoring the FACT that the EXCEPTION CLAUSE contained within the body of the 13th Amendment of the U.S. Constitution has LEGALIZED Slavery and Involuntary Servitude in Amerika. until we finally begin to have THAT CONVERSATION, we actually aren't serious about true REPARATIONS. SLAVERY IS NOT ABOLISHED YET AND WE STILL AIN'T FREE!

There are movements here in Amerika known by names such as: End Prison Slavery! and Amend the 13th! There are Campaigns such as the Right-2-Vote campaign which is being led by our Warrior Princess Amani Sawari. This Campaign seeks to RESTORE VOTING RIGHTS and re-enfranchise hundreds of thousands of prisoners who have had their Right-2-Vote taken from them.

I want all of you to understand that as soon as a prisoner is released from prison or jail, she or he is expected to find a job and pay taxes! So with this in mind, why in the hell can't all States Restore our Right-2-Vote? The oppressors want us to financially support a System which has sought to destroy us for generations yet they want us to be satisfied with not having a 'VOICE' or a VOTE??? However, DISENFRANCHISING BLACKS AND LATINX People serves the interests of the G.O.P which is led by Donald J. Trump.---FACTS!!!

I have comrades and close friends who tell me: 'Malik we don't support the electoral process and we won't publish or post anything you write that talks about or promotes it'. Well I say this: 'That is easy for them to say when most of them who tell me this are Free Citizens who are not Black or Latinx and they sit comfortably on their couches in their Air Conditioned Apartments, Houses, or Lofts and surf the net on their I-Phones or get up and go to the park and enjoy Freedom!'.

But I'd like for some of you reading this essay to think about things from my perspective for a moment. Think about being trapped in a concrete cage for 23 to 24 hours a day for 365 days out of the year and think about how hopeless things can get when you know that there is a White Supremacist who resides at 1600 Pennsylvania Avenue in Washington D.C. and this persyn doesn't give a damn whether you live or die!! Think about the immigrant children down here in South Texas. Children who can't play or get an education or gain access to Legal Help because this Administration would rather see them locked in cages than be FREE!! When you start to change your perspective for a moment, you will see why THERE IS NO DAMN WAY I will try to convince Black or Latinx people not to attempt to Vote this Bigot out of Office! And for some of y'all to with-hold your support of me and refuse to amplify my voice??? Well really y'all don't give a damn about me or our sisters and brothers who languish in these prisons, jails, and detention centers!! I SAID THAT AND I MEANT THAT! But Sisters and Brothers, please know that our enemies are the same and though I do get angry and frustrated I choose Solidarity over divisiveness. We can't win when we fight each other and I get that. But we must dialogue more about this subject. We must continue to Struggle Together Against these Fascist/Imperialists and White Supremacists because in the year 2019----WE STILL AIN'T FREE!

When people hear the terms White Supremacist or White Nationalist, they envision bald headed young white men with swastikas, celctic crosses, and santanic body art tattooed on their bodies. People in Amerika like to believe that these hateful ideologies are only embraced by a small cross section of Amerika Society. This is not true. Some believe that only a small group of angry white men in rural sections of the South or remote locations in the North-West perpetuate this hate. This is also not true.

I am here to tell you TODAY that there are Semi-College educated WHITE WIMMIN who hold HIGH POSITIONS within the Texas Department of Criminal Justice(sic!) that harbor and embrace these ideologies of bigotry and hatred.

These employees of the State of Texas continue to allow their hatred of Black and Latinx people manifest in their arbitrary, capricious, and bias application of prison policies and Texas Government Codes. When called out these wimmin feign innocence but these wimmin who HATE have names and TODAY I WILL NAME THEM!

#1.) Lorie Davis, TDCJ-CID director #2.) Tracey Bailey, Deputy Director of TDCJ #3.) Jennifer Smith, Supervisor and Permanent Member of the Director's Review Committee #4.) Janet Salles, Mail Room Supervisor--McConnell Unit and her assistant #5.) Cherrell Merrell, Mail Room Employee, McConnell Unit. Don't be shocked and don't be surprised! For Donald J. Trump to become the President of the United States you had to know that it was more than angry white men voting for him!! You had to know that there are racists white wimmin in Amerika who quietly and secretely condone the racial hatred and are down with the slogan: MAKE AMERICAN GREAT AGAIN! These wimmin want to see the clock turned back on our Civil Rights! And down here in Texas, they have an Attorney General named Ken Paxton who has put a Cloak of Protection over these modern day bigots and clandestine supporters of the Klu Klux Klan!! Once again: I SAID THAT AND I MEANT THAT!

Sisters and Brothers, a little over 4 years ago a white man entered a historic black church in Charleston, South Carolina and murdered in cold blood NINE of our sisters and brothers who were there to promote Peace and not Hate! In the year 2019---WE STILL AIN'T FREE! When we incarcerate more Black Men in the U.S. Prisons and Jails than we graduate from College. WE STILL AIN'T FREE!

When my outgoing mail is tampered with and Censored because I dare to mention the Black August Memorial or I promote our Afrikan Amerikan Abolitionist Holiday and I CAN'T GET NOT ONE LAWYER IN AMERIKA TO REPRESENT ME!!??

When the Front Running Democrat for the 2020 Presidential Election praises his relationship with Racist Congressmen know to be Segreagationists! WE STILL AIN'T FREE! This Revolution won't be Televised. It starts in your

*Additional text is cut off and ends.*