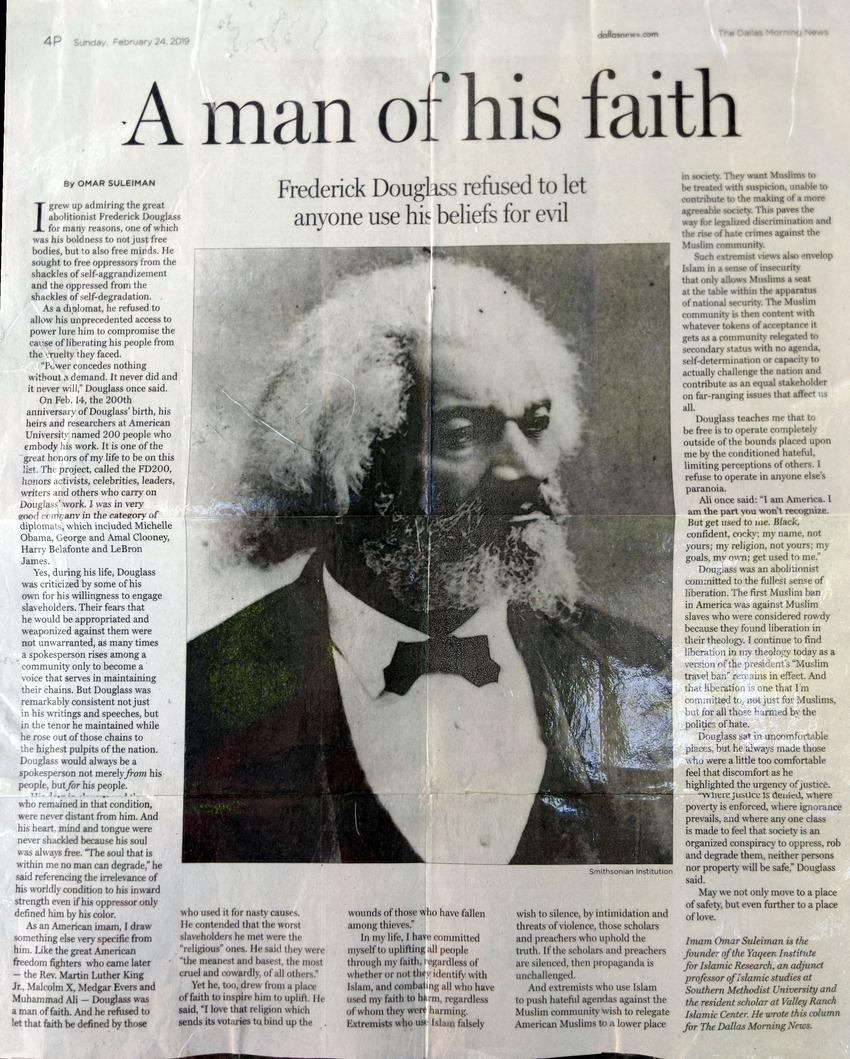 As a diplomat, he refused to allow his unprecedented access to power lure him to compromise the cause of liberating his people from the cruelty that they faced.

"Power concedes nothing without a demand. It never did and it never will," Douglass once said.

Yes, Douglass was criticized during his life by some of his own for his willingness to engage slaveholders. Their fears that he would be appropriated and weaponized against them were not unwarranted, as many times a spokesperson rises among a community only to become a voice that serves in maintaining their chains. But Douglass was remarkably consistent not just in his writings and speeches, but in the tenor he maintained while he rose out of those chains to the highest pulpits of the nation. Douglass would always be a spokesperson not merely from his people, but for his people.

His days in slavery, and those who remained in that condition, were never distant from him. And his heart, mind and tongue were never shackled because his soul was always free. "The soul that is within me no man can degrade," he said referencing the irrelevance of his worldly condition to his inward strength even if his oppressor only defined him by his color.

As an American Imam, I draw something else very specific from him. Like the great American freedom fighters that came later — the Rev. Martin Luther King, Jr., Malcolm X, Medgar Evers and Muhammad Ali — Douglass was a man of faith. And he refused to let that faith be defined by those who used it for nasty causes. He contended that the worst slaveholders he met were the "religious" ones. He said they were "the meanest and basest, the most cruel and cowardly, of all others."

Yet he, too, drew from a place of faith to inspire him to uplift. He said, "I love that religion which sends its votaries to bind up the wounds of those who have fallen among thieves."

In my life, I have committed myself to uplifting all people through my faith, regardless of whether or not they identify with Islam, and combating all who have used my faith to harm, regardless of whom they were harming. Extremists who use Islam falsely wish to silence, by intimidation and threats of violence, those scholars and preachers who uphold the truth. If the scholars and preachers are silenced, then propaganda is unchallenged.

Such extremist views also envelope Muslims in a sense of insecurity that only allows them a seat at the table within the apparatus of national security. The Muslim community is then content with whatever tokens of acceptance it gets as a community relegated to secondary status with no agenda, self-determination or capacity to actually challenge the nation and contribute as an equal stakeholder on far ranging issues that affect us all.

Douglass teaches me that to be free is to operate completely outside of the bounds placed upon me by the conditioned hateful, limiting perceptions of others. I refuse to operate in anyone else's paranoia.

Douglass was an abolitionist committed to the fullest sense of liberation. The first Muslim ban in America was against Muslim slaves who were considered rowdy because they found liberation in their theology. I continue to find liberation in my theology today as the president's Muslim ban remains in effect. And that liberation is one that I'm committed to, not just for Muslims, but for all those harmed by the politics of hate.

Douglass sat in uncomfortable places, but he always made those who were a little too comfortable feel that discomfort as he highlighted the urgency of justice.

"Where justice is denied, where poverty is enforced, where ignorance prevails, and where any one class is made to feel that society is an organized conspiracy to oppress, rob and degrade them, neither persons nor property will be safe," Douglass said.

Imam Omar Suleiman is the founder of the Yaqeen Institute for Islamic Research, an adjunct professor of Islamic studies at Southern Methodist University and the resident scholar at Valley Ranch Islamic Center. He wrote this column for The Dallas Morning News.