Some Thoughts On Prisons & Political Prisoners 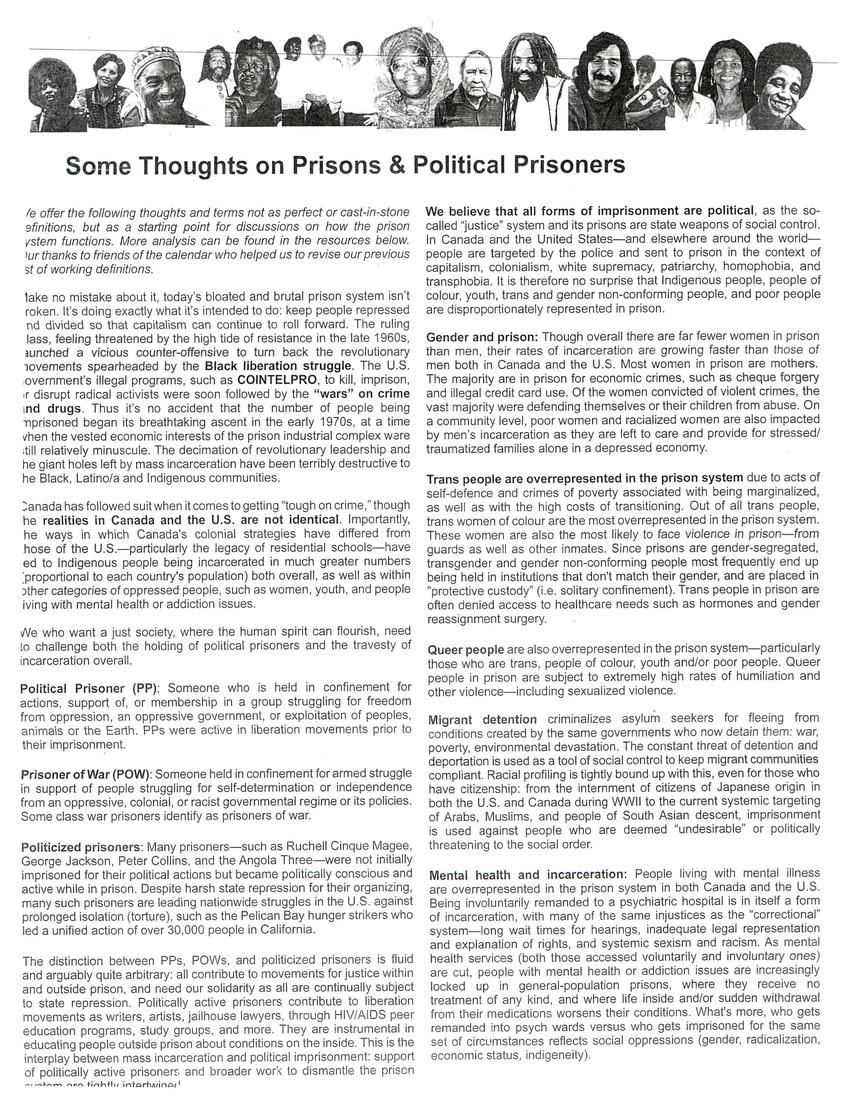 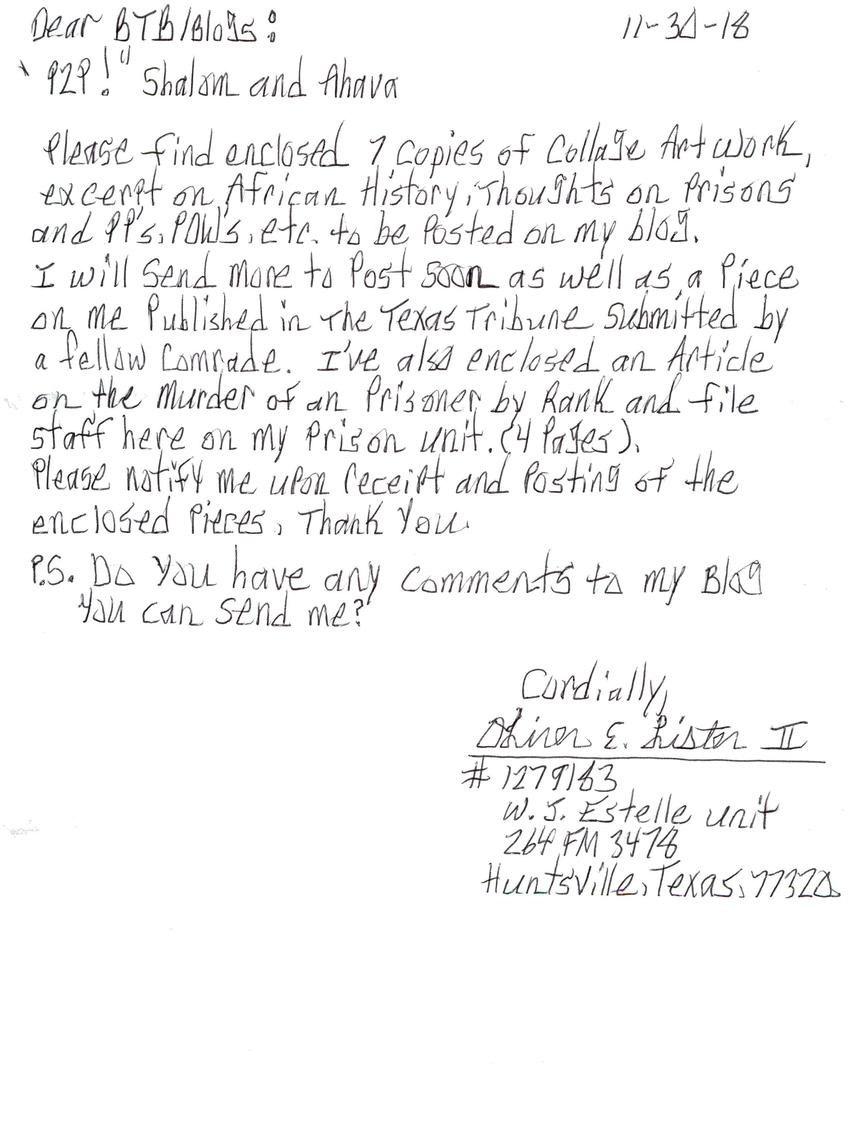 Some Thoughts on Prisons & Political Prisoners

We offer the following thoughts and terms not as perfect or cast-in-stone definitions, but as a starting point for discussions on how the prison system functions. More analysis can be found in the resources below. Our thanks to friends of the calendar who helped us to revise our previous list of working definitions.

Make no mistake about it, today's bloated and brutal prison system isn't broken. It's doing exactly what it's intended to do: keep people repressed and divided so that capitalism can continue to roll forward. The ruling class, feeling threatened by the high tide of resistance in the late 1960s, launched a vicious counter-offensive to turn back the revolutionary movements spearheaded by the Black liberation struggle. The U.S. government's illegal programs, such as COINTELPRO, to kill, imprison, or disrupt radical activists were soon followed by the "wars" on crime and drugs. Thus it's no accident that the number of people being imprisoned began its breathtaking ascent in the early 1970s, at a time when the vested economic interests of the prison industrial complex were still relatively minuscule. The decimation of revolutionary leadership and the giant holes left by mass incarceration have been terribly destructive to the Black, Latino/a and Indigenous communities.

Canada has followed suit when it comes to getting "tough on crime", though the realities in Canada and the U.S. are not identical. Importantly, the ways in which Canada's colonial strategies have differed from those of the U.S. - particularly the legacy of residential schools - have led to Indigenous people being incarcerated in much greater numbers (proportional to each country's population) both overall, as well as within other categories of oppressed people, such as women, youth, and people living with mental health or addiction issues.

We who want a just society, where the human spirit can flourish, need to challenge both the holding of political prisoners and the travesty of incarceration overall.

Political Prisoner (PP): Someone who is held in confinement for actions, support of, or membership in a group struggling for freedom from oppression, an oppressive government, or exploitation of peoples, animals or the Earth. PPs were active in liberation movements prior to their imprisonment.

Prisoner of War (POW): Someone held in confinement for armed struggle in support of people struggling for self-determination or independence from an oppressive, colonial, or racist governmental regime or its policies. Some class war prisoners identify as prisoners of war.

Politicized prisoners: Many prisoners - such as Ruchell Cinque Magee, George Jackson, Peter Collins, and the Angola Three - were not initially imprisoned for their political actions but became politically conscious and active while in prison. Despite harsh state repression for their organizing, many such prisoners are leading nationwide struggles in the U.S. against prolonged isolation (torture), such as the Pelican Bay hunger strikers who led a unified action of over 30,000 people in California.

The distinction between PPs, POWs, and politicized prisoners is fluid and arguably quite arbitrary; all contribute to movements for justice within and outside prison, and need our solidarity as all are continually subject to state repression. Politically active prisoners contribute to liberation movements as writers, artists, jailhouse lawyers, through HIV/AIDS peer education programs, study groups, and more. They are instrumental in educating people outside prison about conditions on the inside. This is the interplay between mass incarceration and political imprisonment: support of politically active prisoners and broader work to dismantle the prison system are tightly intertwined.

We believe that all forms of imprisonment are political, as the so-called "justice" system and its prisons are state weapons of social control. In Canada and the United States - and elsewhere around the world - people are targeted by the police and sent to prison in the context of capitalism, colonialism, white supremacy, patriarchy, homophobia, and transphobia. It is therefore no surprise that Indigenous people, people of colour, youth, trans and gender non-conforming people, and poor people are disproportionately represented in prison.

Gender and prison: Though overall there are far fewer women in prison than men, their rates of incarceration are growing faster than those of men both in Canada and the U.S. Most women in prison are mothers. The majority are in prison for economic crimes, such as cheque forgery and illegal credit card use. Of the women convicted of violent crimes, the vast majority were defending themselves or their children from abuse. On a community level, poor women and racialized women are also impacted by men's incarceration as they are left to care and provide for stressed/traumatized families alone in a depressed economy.

Trans people are overrepresented in the prison system due to acts of self-defence and crimes of poverty associated with being marginalized, as well as with the high costs of transitioning. Out of all trans people, trans women of colour are the most overrepresented in the prison system. These women are also the most likely to face violence in prison - from guards as well as other inmates. Since prisons are gender-segregated, transgender and gender non-conforming people most frequently end up being held in institutions that don't match their gender, and are placed in "protective custody" (i.e. solitary confinement). Trans people in prison are often denied access to healthcare needs such as hormones and gender reassignment surgery.

Queer people are also overrepresented in the prison system - particularly those who are trans, people of colour, youth and/or poor people. Queer people in prison are subject to extremely high rates of humiliation and other violence - including sexualized violence.

Migrant detention criminalizes asylum seekers for fleeing from conditions created by the same governments who now detain them: war, poverty, environmental devastation. The constant threat of detention and deportation is used as a tool of social control to keep migrant communities compliant. Racial profiling is tightly bound up with this, even for those who have citizenship: from the internment of citizens of Japanese origin in both the U.S. and Canada during WWII to the current systemic targeting of Arabs, Muslims, and people of South Asian descent, imprisonment is used against people who are deemed "undesirable" or politically threatening to the social order.

Mental health and incarceration: People living with mental illness are overrepresented in the prison system in both Canada and the U.S. Being involuntarily remanded to a psychiatric hospital is in itself a form of incarceration, with many of the same injustices as the "correctional" system - long wait times for hearings, inadequate legal representation and explanation of rights, and systemic sexism and racism. As mental health services (both those accessed voluntarily and involuntary ones) are cut, people with mental health or addiction issues are increasingly locked up in general-population prisons, where they receive no treatment of any kind, and where life inside and/or sudden withdrawal from their medications worsens their conditions. What's more, who gets remanded into psych wards versus who gets imprisoned for the same set of circumstances reflects social oppressions (gender, radicalization, economic status, indigeneity).

Please find enclosed 7 copies of collage artwork, excerpt on African history, thoughts on prisons and PP's, POW's, etc to be posted on my blog. I will send more to post soon as well as a piece on me published in the Texas Tribune submitted by a fellow comrade. I've also enclosed an article on the murder of a prisoner by rank and file staff here on my prison unit. (4 pages). Please notify me upon receipt and posting of the enclosed pieces. Thank you.

P.S. Do you have any comments to my blog you can send me?