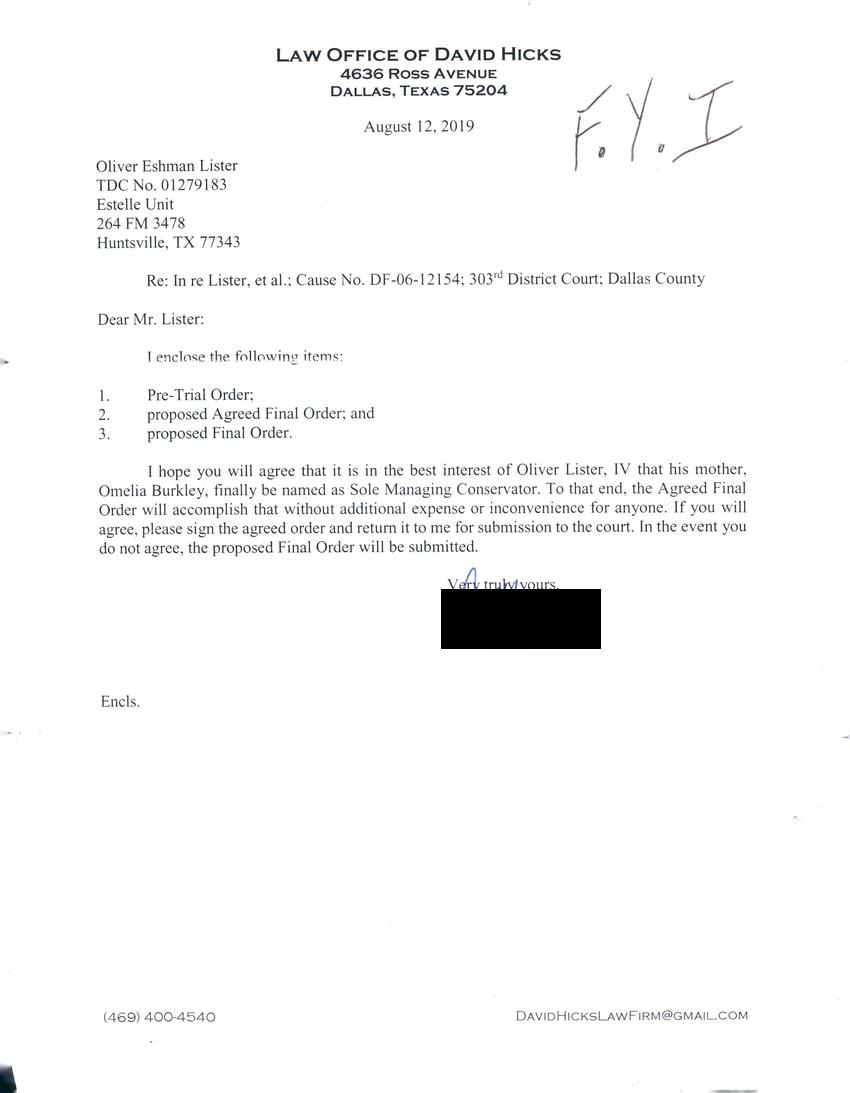 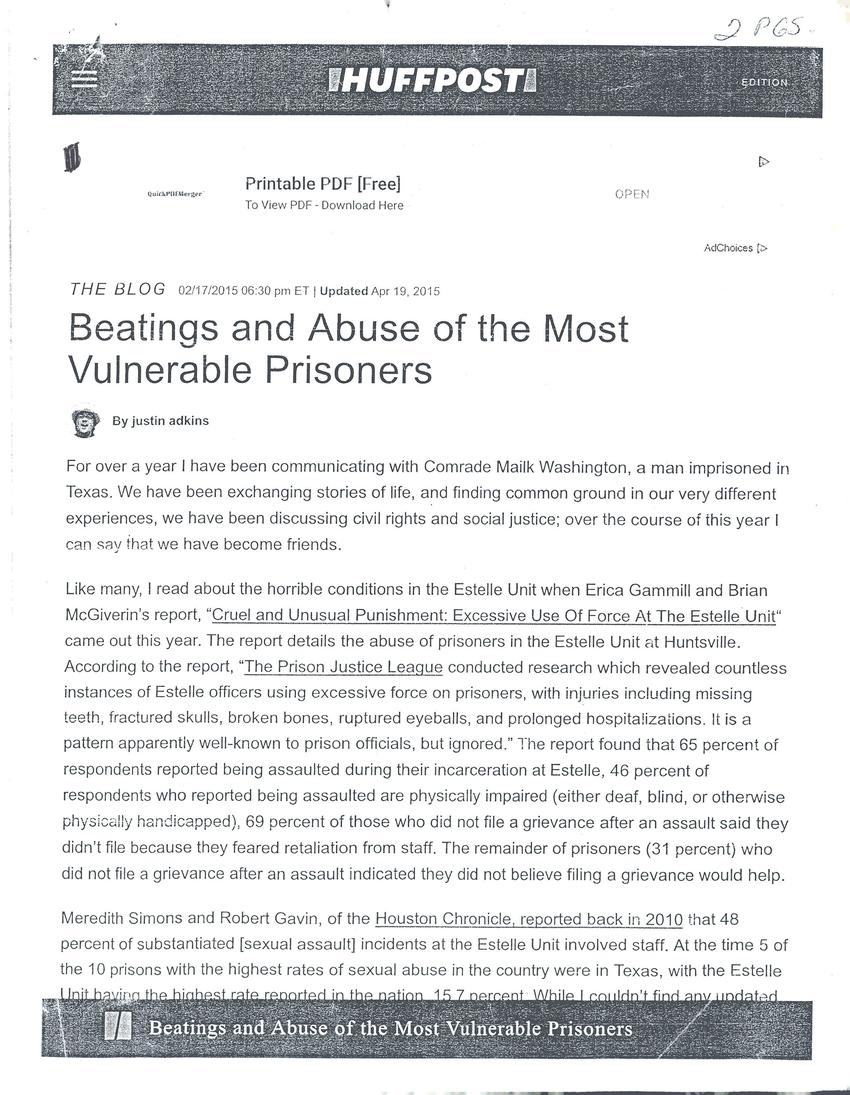 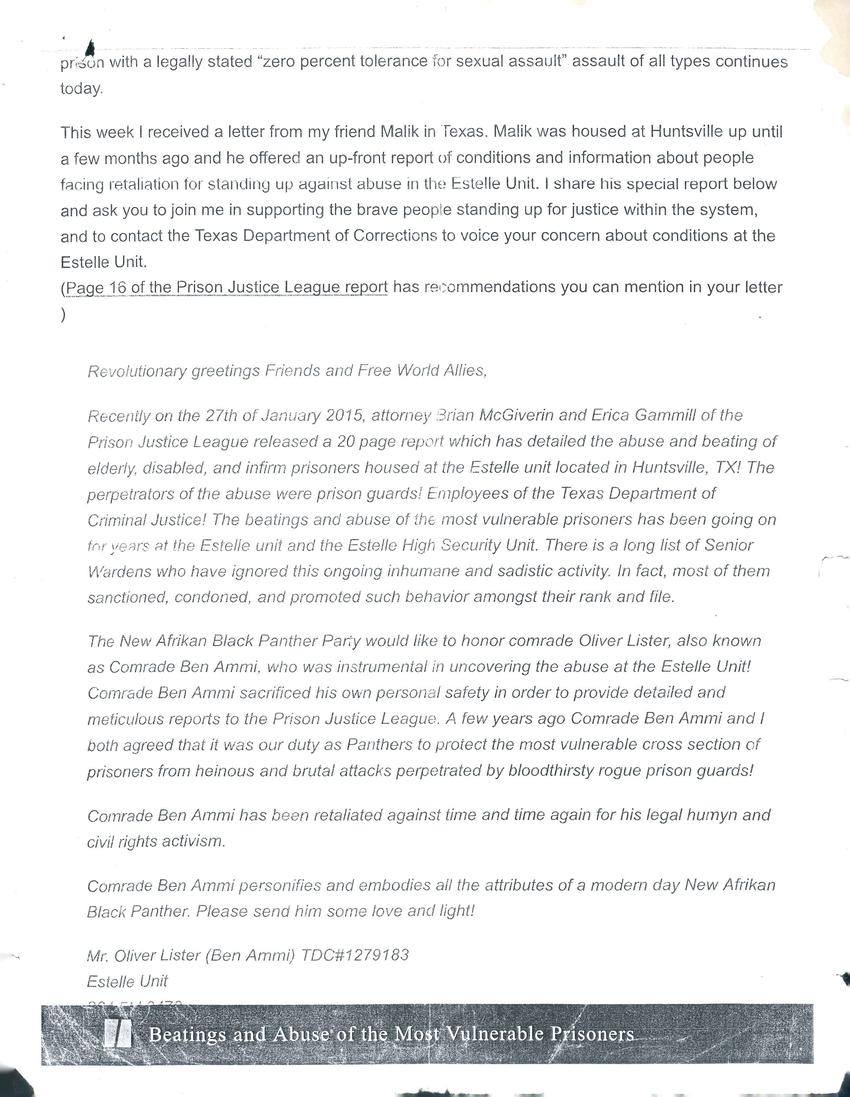 I enclose the following items:

I hope you will agree that it is in the best interest of Oliver Lister, IV that his mother, Omelia Burkley, finally be named as Sole Managing Conservator. To that end, the Agreed Final Order will accomplish that without additional expense or inconvenience for anyone. If you will agree, please sign the agreed order and return it to me for submission to the court. In the event you do not agree, the proposed Final Order will be submitted.

Beatings and Abuse of the Most Vulnerable Prisoners
by Justin Adkins

For over a year I have been communicating with Comrade Mailk Washington, a man imprisoned in Texas. We have been exchanging stories of life, and finding common ground in our very different experiences, we have been discussing civil rights and social justice; over the course of this year I can say that we have become friends.

Like many, I read about the horrible conditions in the Estelle Unit when Erica Gammill and Brian McGiverin's report, "Cruel and Unusual Punishment: Excessive Use of Force At The Estelle Unit" came out this year. The report details the abuse of prisoners in the Estelle Unit at Huntsville. According to the report, "The Prison Justice League conducted research which revealed countless instances of Estelle officers using excessive force on prisoners, with injuries including mussing teeth, fractured skulls, broken bones, ruptured eyeballs, and prolonged hospitalizations. It is a pattern apparently well-known to prison officials, but ignored." The report found that 65 percent of respondents reported being assaulted during their incarceration at Estelle, 46 percent of respondents who reported being assaulted are physically impaired (either deaf, blind, or otherwise physically handicapped), 69 percent of those who did not file a grievance after an assault said they didn't file because they feared retaliation from staff. The remainder of prisoners (31 percent) who did not file a grievance after an assault indicated they did not believe filing a grievance would help.

Meredith Simons and Robert Gavin, of the Houston Chronicle, reported back in 2010 that 48 percent of substantiated [sexual assault] incidents at the Estelle Unit involved staff. At the time 5 of the 10 prisons with the highest rates of sexual abuse in the country were in Texas, with the Estelle Unity having the highest rate reported in the nation, 15.7 percent. While I couldn't find any updated prison with a legally stated "zero percent tolerance for sexual assault" assault of all types continues today.

This week I received a letter from my friend Malik in Texas. Malik was housed at Huntsville up until a few months ago and he offered an up-front report of conditions and information about people racing retaliation for standing up against abuse in the Estelle Unit. I share his special report below and ask you join my in supporting the brave people standing up for justice within the system, and to contact the Texas Department of Corrections to voice your concern about conditions at the Estelle Unit.
(Page 16 of the Prison Justice League report has recommendations you can mention in your letter)

Recently on the 27th of January 2015, attorney Brian McGiverin and Erica Gammill of the Prison Justice Leage released a 20 page report which has detailed the abuse and beating of elderly, disabled, and infirm prisoners housed at the Estelle unit location in Huntsville, TX! The perpetrators of the abuse were prison guards! Employees of the Texas Department of Criminal Justice! The beatings and abuse of the most vulnerable prisoners has been going on for years at the Estelle unit and the Estelle High Security Unit. There is long list of Senior Wardens who have ignored this ongoing inhumane and sadistic activity. In facy, most of them sanctioned, condoned, and promoted such behavior amongst their rank and file.

The New Afrikan Black Panther Party would like to honor comrade Oliver Lister, also known as Comrade Ben Ammi, who was instrumental in uncovering the abuse at the Estelle Unity! Comrade Ben Ammi sacrificed his own personal safety in order to provide detailed and meticulous reports to the Prison Justice League. A few years ago Comrade Ben Ammi and I both agreed that it was our duty as Panthers to protect the most vulnerable cross section of prisoners from heinous and brutal attackes perpetrated by bloodthirsty rogue prison guards!

Comrade Ben Ammi has been retaliated against time and time agin for his legal humyn and civil rights activism.

Comrade Ben Ammi personifies and embodies all the attributes of a modern day New Afrikan Black Panther. Please send him some love and light!

I hope you remain well, safe, and hopeful for the future.