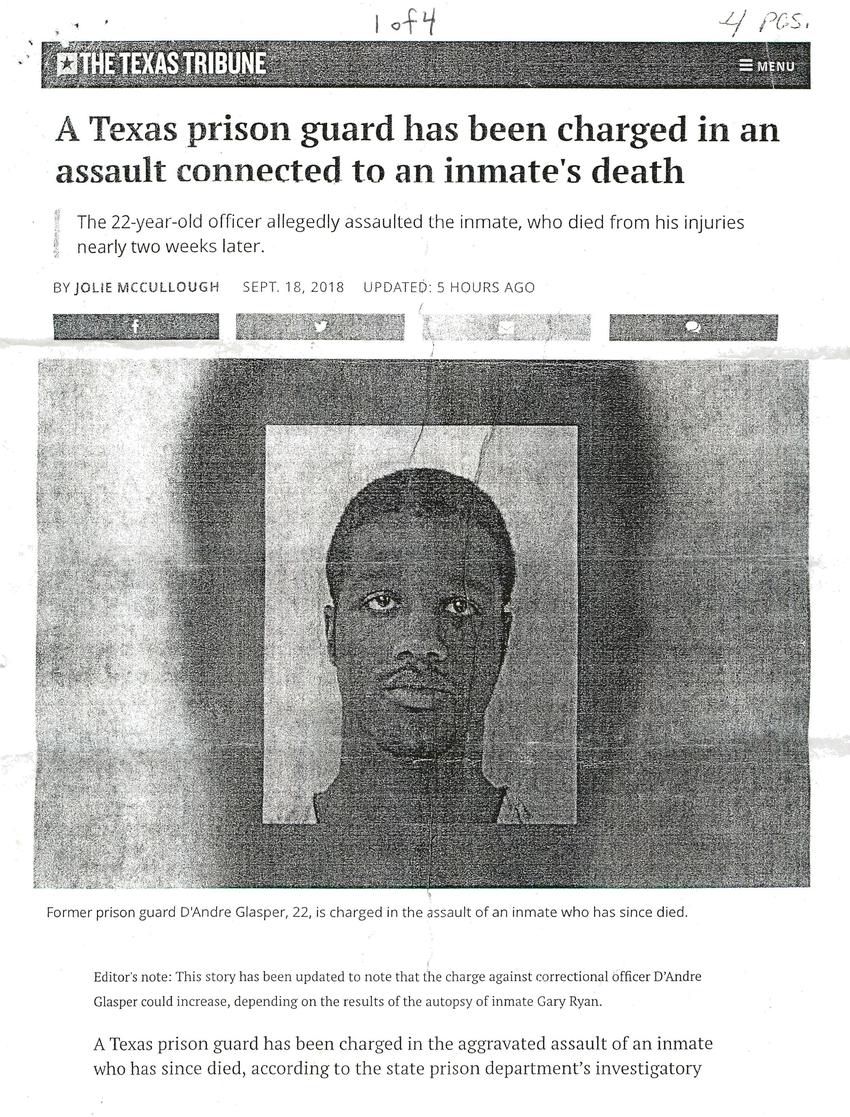 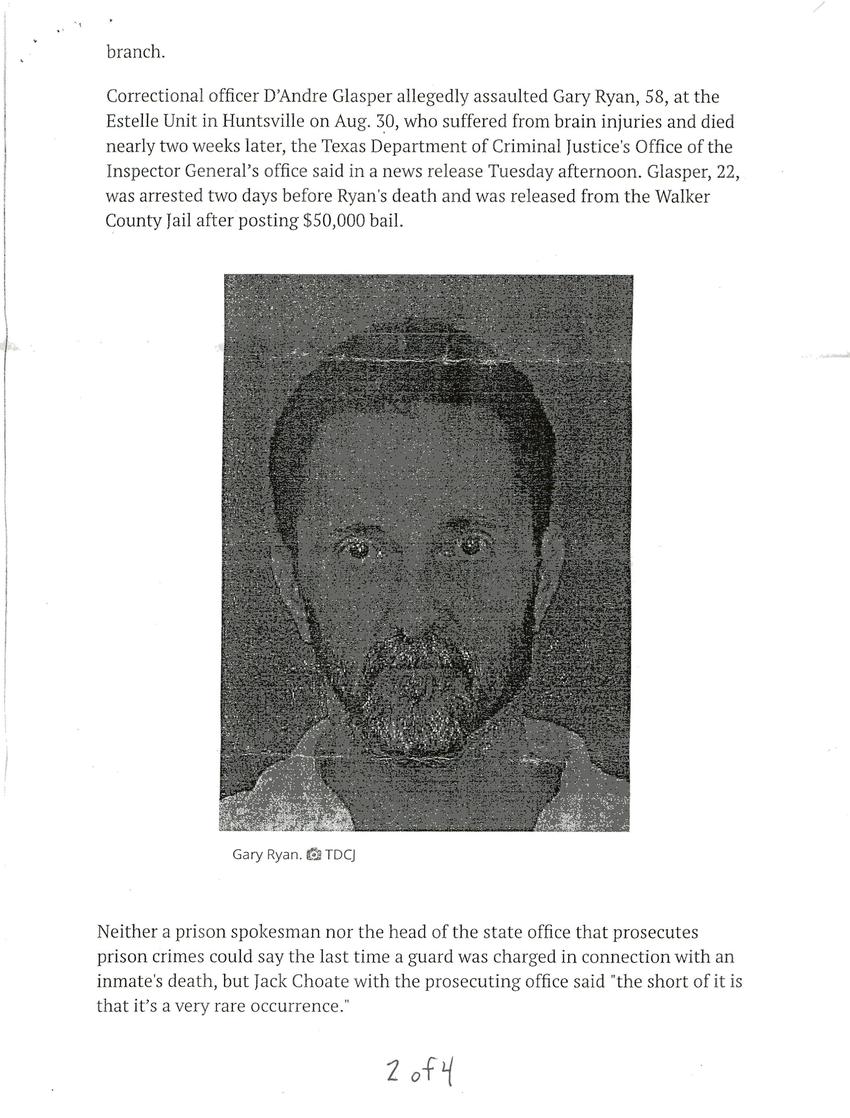 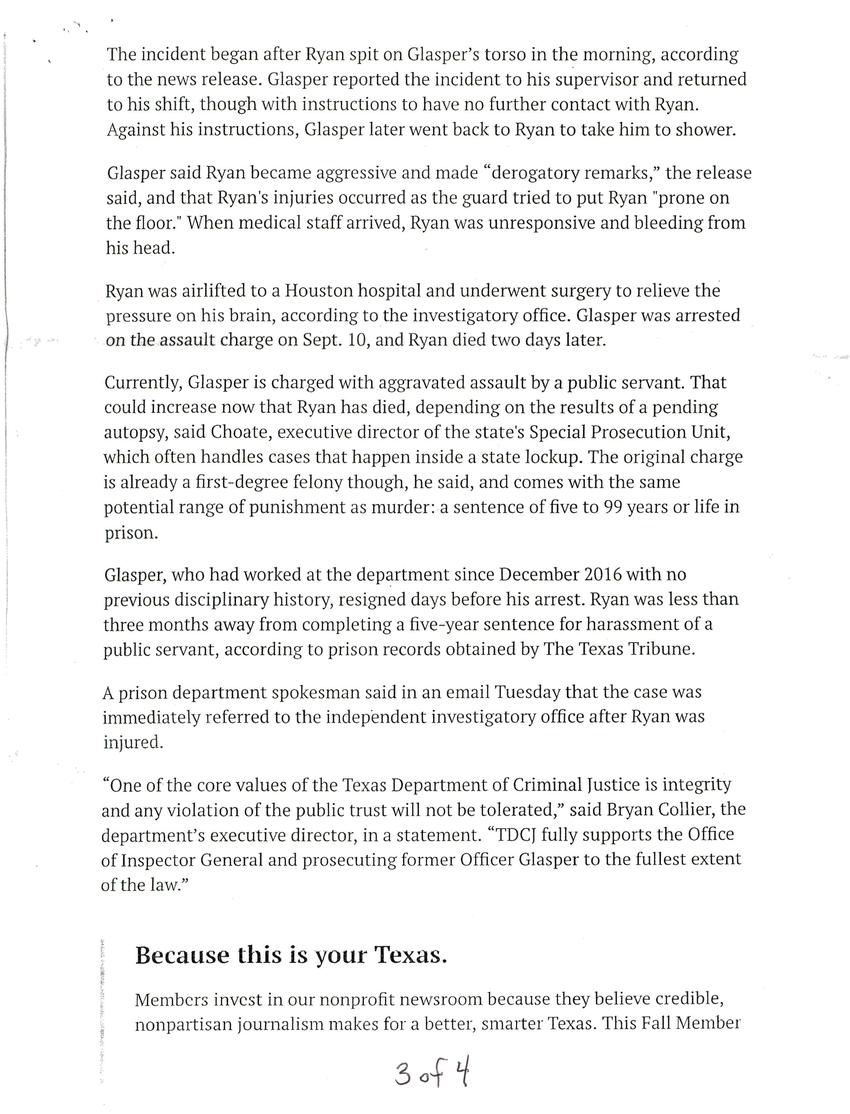 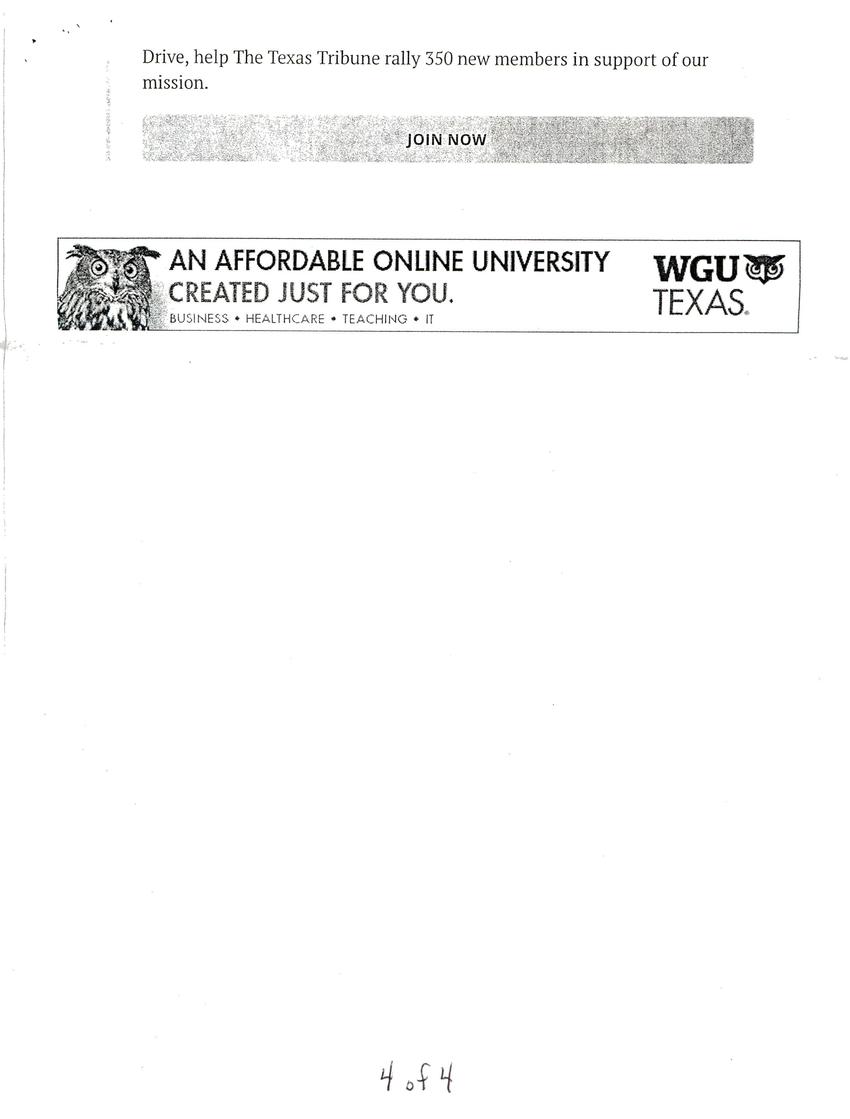 A Texas prison guard has been charged in an assault connected to an inmate's death
The 22-year-old officer allegedly assaulted the inmate, who died from his injuries nearly two weeks later.
BY JOLIE MCCULLOUGH SEPT. 18, 2018 UPDATED: SEPT. 19, 2018

Editor's note: This story has been updated to note that the charge against correctional officer D’Andre Glasper could increase, depending on the results of the autopsy of inmate Gary Ryan.

A Texas prison guard has been charged in the aggravated assault of an inmate who has since died, according to the state prison department’s investigatory branch.

Correctional officer D’Andre Glasper allegedly assaulted Gary Ryan, 58, at the Estelle Unit in Huntsville on Aug. 30, who suffered from brain injuries and died nearly two weeks later, the Texas Department of Criminal Justice's Office of the Inspector General’s office said in a news release Tuesday afternoon. Glasper, 22, was arrested two days before Ryan's death and was released from the Walker County Jail after posting $50,000 bail.

Neither a prison spokesman nor the head of the state office that prosecutes prison crimes could say the last time a guard was charged in connection with an inmate's death, but Jack Choate with the prosecuting office said "the short of it is that it’s a very rare occurrence."

The incident began after Ryan spit on Glasper’s torso in the morning, according to the news release. Glasper reported the incident to his supervisor and returned to his shift, though with instructions to have no further contact with Ryan. Against his instructions, Glasper later went back to Ryan to take him to shower.

Glasper said Ryan became aggressive and made “derogatory remarks,” the release said, and that Ryan's injuries occurred as the guard tried to put Ryan "prone on the floor." When medical staff arrived, Ryan was unresponsive and bleeding from his head.

Ryan was airlifted to a Houston hospital and underwent surgery to relieve the pressure on his brain, according to the investigatory office. Glasper was arrested on the assault charge on Sept. 10, and Ryan died two days later.

Currently, Glasper is charged with aggravated assault by a public servant. That could increase now that Ryan has died, depending on the results of a pending autopsy, said Choate, executive director of the state's Special Prosecution Unit, which often handles cases that happen inside a state lockup. The original charge is already a first-degree felony though, he said, and comes with the same potential range of punishment as murder: a sentence of five to 99 years or life in prison.

Glasper, who had worked at the department since December 2016 with no previous disciplinary history, resigned days before his arrest. Ryan was less than three months away from completing a five-year sentence for harassment of a public servant, according to prison records obtained by The Texas Tribune.

A prison department spokesman said in an email Tuesday that the case was immediately referred to the independent investigatory office after Ryan was injured.

“One of the core values of the Texas Department of Criminal Justice is integrity and any violation of the public trust will not be tolerated,” said Bryan Collier, the department’s executive director, in a statement. “TDCJ fully supports the Office of Inspector General and prosecuting former Officer Glasper to the fullest extent of the law.”

Read related Tribune coverage
*Advocacy groups call for outside watchdog of Texas prisons after guard indictments
*"You’re not as safe as you should be." How understaffing is affecting one Texas prison

Quality journalism doesn't come free
Perhaps it goes without saying — but producing quality journalism isn't cheap. At a time when newsroom resources and revenue across the country are declining, The Texas Tribune remains committed to sustaining our mission: creating a more engaged and informed Texas with every story we cover, every event we convene and every newsletter we send. As a nonprofit newsroom, we rely on members to help keep our stories free and our events open to the public. Do you value our journalism? Show us with your support.