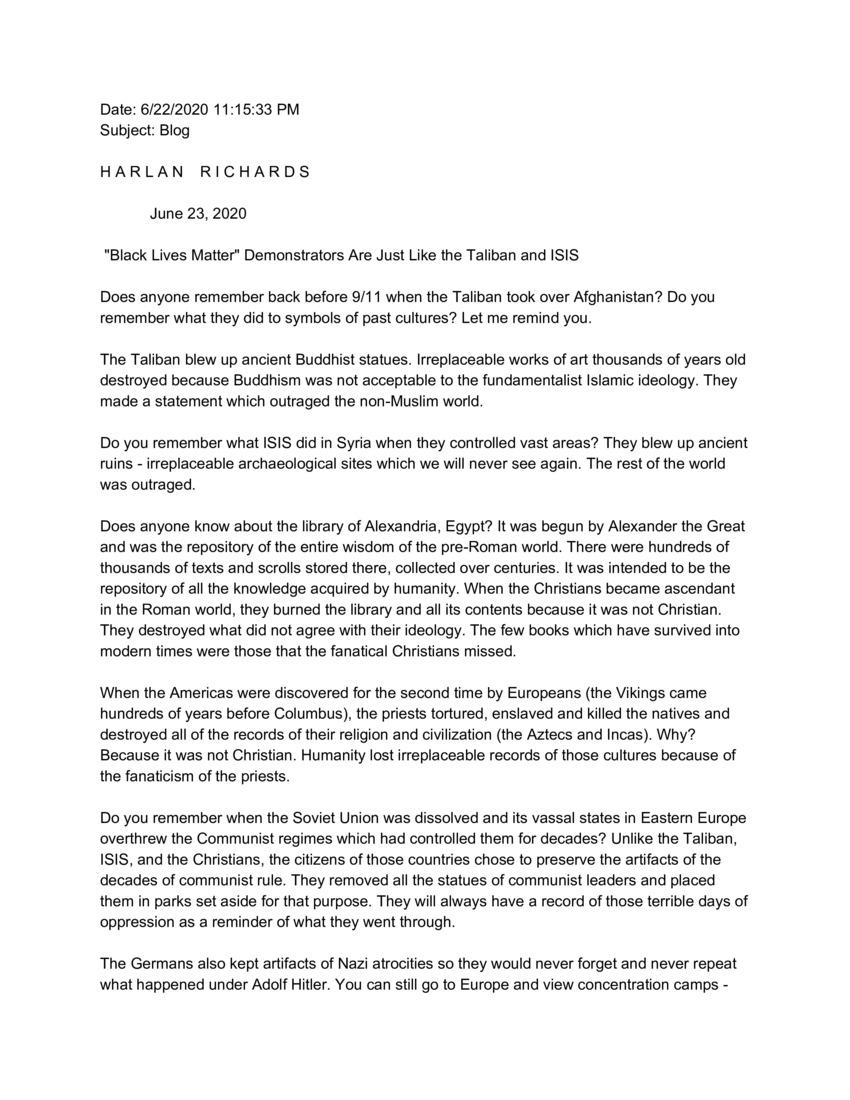 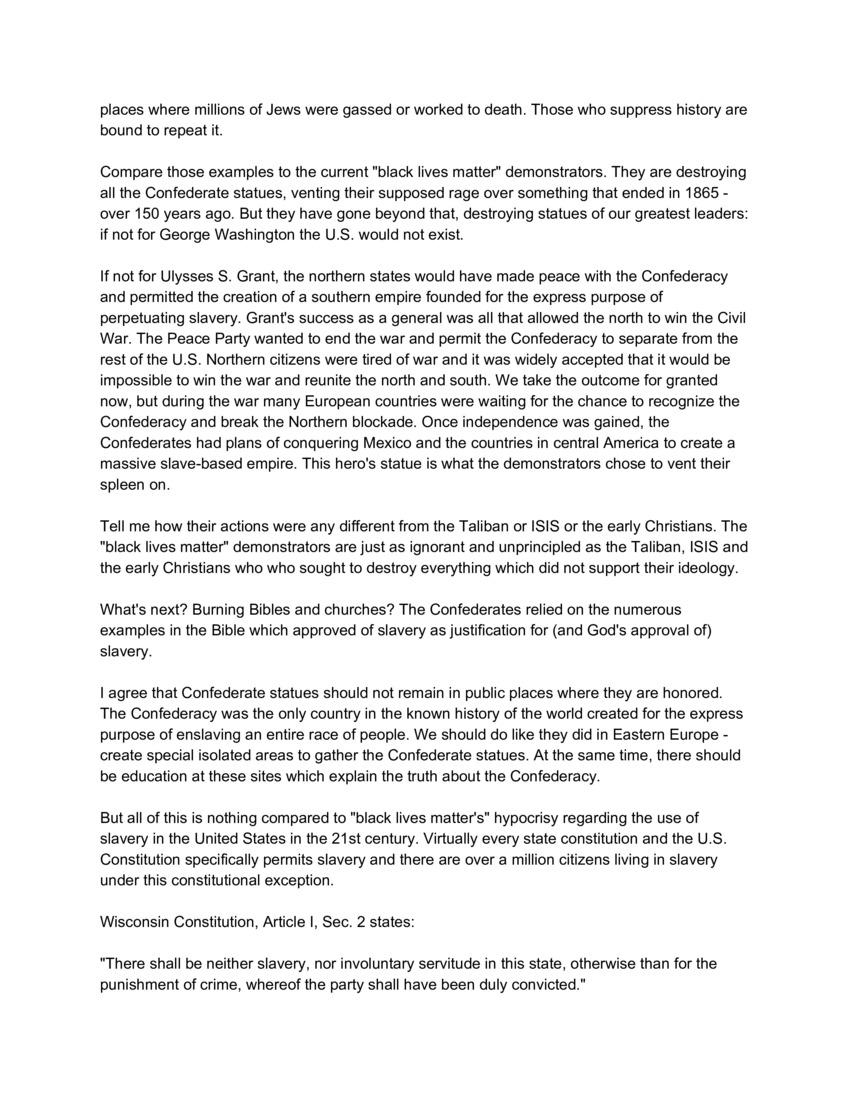 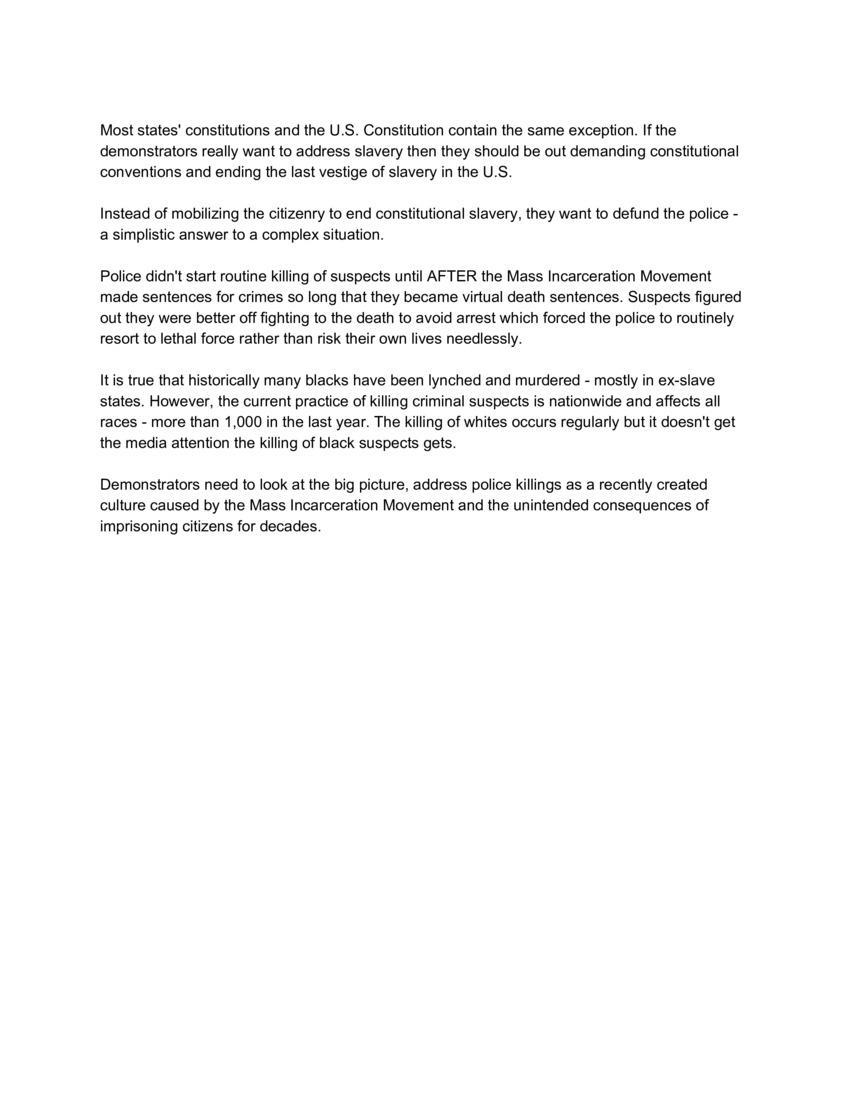 "Black Lives Matter" Demonstrators Are Just Like the Taliban and ISIS

Does anyone remember back before 9/11 when the Taliban took over Afghanistan? Do you remember what they did to symbols of past cultures? Let me remind you.

The Taliban blew up ancient Buddhist statues. Irreplaceable works of art thousands of years old destroyed because Buddhism was not acceptable to the fundamentalist Islamic ideology. They made a statement that outraged the non-Muslim world.

Do you remember what ISIS did in Syria when they controlled vast areas? They blew up ancient ruins - irreplaceable archaeological sites which we will never see again. The rest of the world was outraged.

Does anyone know about the library of Alexandria, Egypt? It was begun by Alexander the Great and was the repository of the entire wisdom of the Pre-Roman world. There were hundreds of thousands of texts and scrolls stored there, collected over centuries. It was intended to be the repository of all the knowledge acquired by humanity. When the Christians became ascendant in the Roman world, they burned the library and all its contents because it was not Christian. They destroyed what did not agree with their ideology. The few books which have survived into modern times were those that the fanatical Christians missed.

When the Americas were discovered for the second time by Europeans (the Vikings came hundreds of years before Columbus), the priests tortured, enslaved, and killed the natives and destroyed all of the records of their religion and civilization (the Aztecs and Incas). Why? Because it was not Christian. Humanity lost irreplaceable records of those cultures because of the fanaticism of the priests.

Do you remember when the Soviet Union was dissolved and its vassal states in Eastern Europe overthrew the Communist regimes which had controlled them for decades? Unlike the Taliban, ISIS, and the Christians, the citizens of those countries chose to preserve the artifacts of the decades of communist rule. They removed all the statues of communist leaders and placed them in parks set aside for that purpose. They will always have a record of those terrible days of oppression as a reminder of what they went through.

The Germans also kept artifacts of Nazi atrocities so they would never forget and never repeat what happened under Adolf Hitler. You can still go to Europe and view concentration camps -
places where millions of Jews were gassed or worked to death. Those who suppress history are bound to repeat it.

Compare those examples to the current "black lives matter" demonstrators. They are destroying all the Confederate statues, venting their supposed rage over something that ended in 1865 - over 150 years ago. But they have gone beyond that, destroying statues of our greatest leaders: if not for George Washington the U.S. would not exist.

If not for Ulysses S. Grant, the northern states would have made peace with the Confederacy and permitted the creation of a southern empire founded for the express purpose of perpetuating slavery. Grant's success as a general was all that allowed the north to win the Civil War. The Peace Party wanted to end the war and permit the Confederacy to separate from the rest of the U.S. Northern citizens were tired of war and it was widely accepted that it would be impossible to win the war and reunite the north and south. We take the outcome for granted now, but during the war, many European countries were waiting for the chance to recognize the Confederacy and break the Northern blockade. Once independence was gained, the Confederates had plans of conquering Mexico and the countries in Central America to create a massive slave-based empire. This hero's statue is what the demonstrators chose to vent their spleen on.

What's next? Burning Bibles and churches? The Confederates relied on the numerous examples in the Bible which approved of slavery as justification for (and God's approval of) slavery.

I agree that Confederate statues should not remain in public places where they are honored. The Confederacy was the only country in the known history of the world created for the express purpose of enslaving an entire race of people. We should do like they did in Eastern Europe - create special isolated areas to gather the Confederate statues. At the same time, there should be education at these sites that explain the truth about the Confederacy.

But all of this is nothing compared to "black lives matter's" hypocrisy regarding the use of slavery in the United States in the 21st century. Virtually every state constitution and the U.S. Constitution specifically permits slavery and over a million citizens are living in slavery under this constitutional exception.

"There shall be neither slavery, nor involuntary servitude in this state, otherwise than for the punishment of crime, whereof the party shall have been duly convicted."

Most states' constitutions and the U.S. Constitution contain the same exception. If the demonstrators want to address slavery, then they should be out demanding constitutional conventions and ending the last vestige of slavery in the U.S.

Instead of mobilizing the citizenry to end constitutional slavery, they want to defund the police - a simplistic answer to a complex situation.

Police didn't start routine killing of suspects until AFTER the Mass Incarceration Movement made sentences for crimes so long that they became virtual death sentences. Suspects figured out they were better off fighting to the death to avoid arrest, which forced the police to routinely resort to lethal force rather than risk their own lives needlessly.

It is true that historically many blacks have been lynched and murdered - mostly in ex-slave states. However, the current practice of killing criminal suspects is nationwide and affects all races - more than 1,000 in the last year. The killing of whites occurs regularly, but it doesn't get the media attention the killing of black suspects gets.

Demonstrators need to look at the big picture, address police killings as a recently created culture caused by the Mass Incarceration Movement and the unintended consequences of imprisoning citizens for decades.

Damn...these are good points of interest, not just for the Black Lives Matter movement, but for anyone interested in changing a culture that has brought so much pain to the Black community and everyone else in general.

Thank you for bringing this up.