Reply ✍ Transcribed
From While I Breath, I Hope. by David E. Bauguess
Share this:
uploaded July 11, 2020.  Original (PDF) 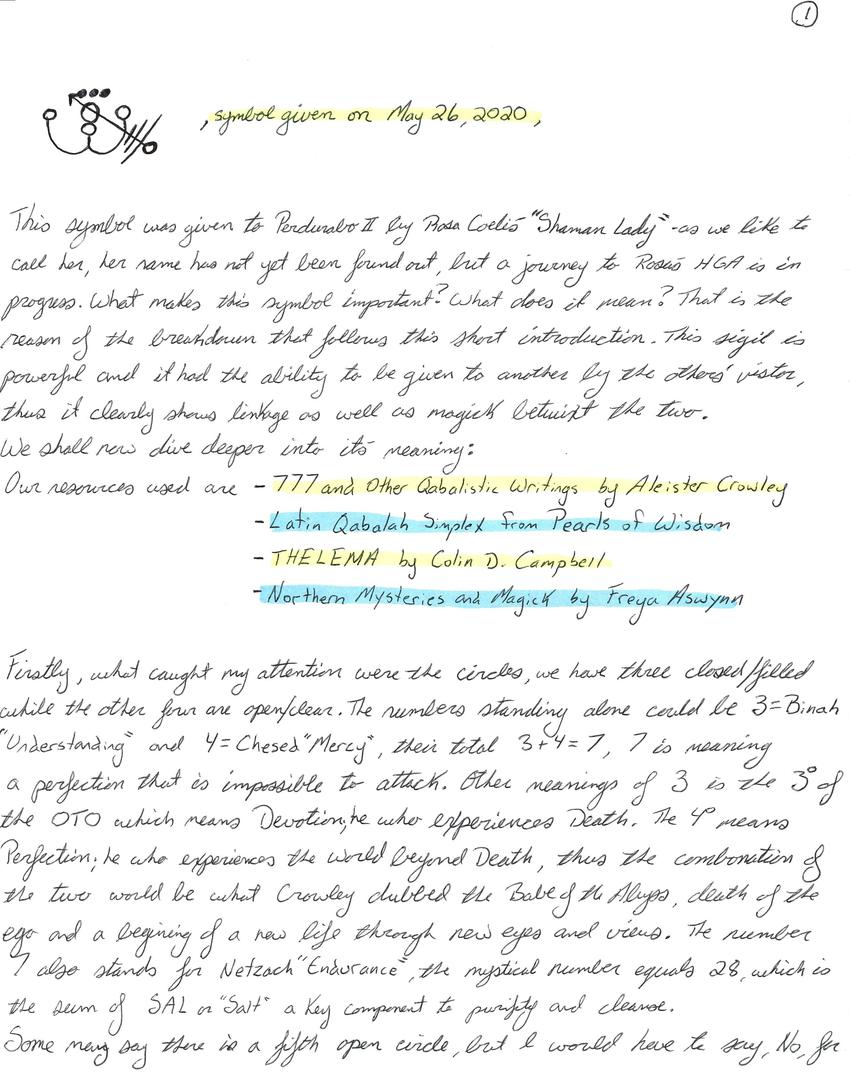 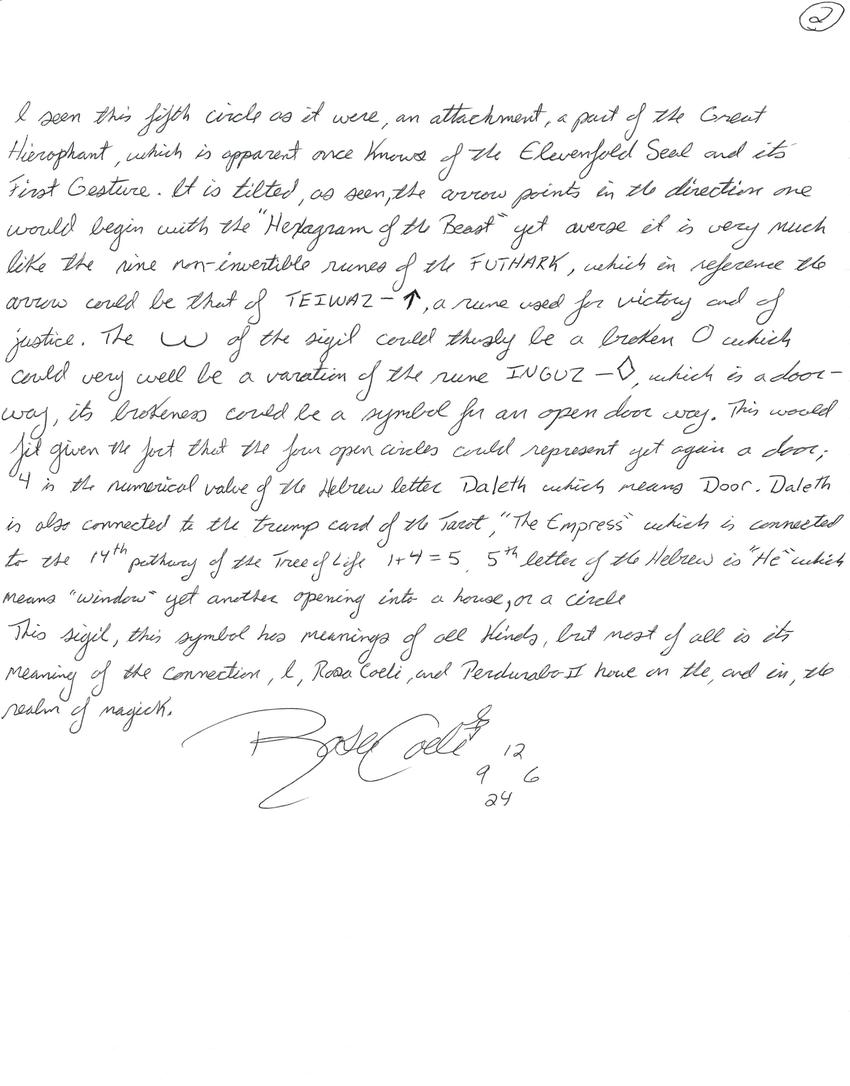 This symbol was given to Perdurabo II by Rosa Coeli's "Shaman Lady" - as we like to call her, her name has not yet been found out, but a journey to Rosa's HGA is in progress. What makes this symbol important? What does it mean? That is the reason of the breakdown that follows this short introduction. This sigil is powerful and it had the ability to be given to another by the other's visitor, thus it clearly shows linkage as well as magick betwixt the two. We shall now dive deeper into its meaning:
Our resources used are
- 777 and Other Qabalistic Writings by Aleister Crowley
- Latin Qabalah Simplex from Pearls of Wisdom
- THELEMA by Colin D. Campbell
- Northern Mysteries and Magick by Freya Aswynn

Firstly, what caught my attention were the circles, we have three closed/filled while the other four are open/clean. the numbers standing alone could be 3 = Binah "Understanding" and 4 = Chesed "Mercy," their total 3 + 4 = 7, 7 is meaning a perfection that is impossible to attack. Other meanings of 3 is the 3[degree symbol] of the OTO which means Devotion; he who experiences Death. The 4[degree symbol] means Perfection; he who experiences the world beyond Death, thus the combination of the two would be what Crowley dubbed the Babe of the Abyss, death of the ego and a beginning of a new life through new eyes and views. The number 7 also stands for Netzach "Endurance," the mystical number equals 28, which is the sum of SAL on "Salt" a key component to purify and cleanse. Some may say there is a fifth open circle, but I would have to say, No, for I have seen this fifth circle as it were, an attachment, a part of the Great Hierophant, which is apparent once Knows of the Elevenfold Seal and its First Gesture. It is tlted, as seen, the arrow points in the direction one would begin with the "Hexagram of the Beast" yet averse it is very much like the nine non-invertible runes of the FUTHARK, which in reference the arrow could be that of TEIWAZ-[arrow pointing upward], a rune used for victory and of justice. The [symbol, like a 3 turned 90 degrees clockwise] of the sigil could thusly be a broken O which could very well be a variation of the rune INGUZ-[quadrilateral diamond, like the diamond suit in a deck of playing cards], which is a doorway, its brokenness could be a symbol for an open doorway. This would fit given the fact that the four open circles could represent yet again a door; 4 is the numerical value of the Hebrew letter Daleth which means Door. Daleth is also connected to the trump card of the Tarot, "The Empress," which is connected to the 14th pathway of the Tree of Life 1+4=5. 5th letter of the Hebrew is "he" which means "window" yet another opening into a house, on a circle.

This sigil, this symbol has meanings of all kinds, but most of all is its meaning of the connection, I, Rosa Coeli, and Perdurabro II have on the, and in, the realm of magick.

Rosa Coeli [her signature with an unknown shape above the final letter, possibly a capital S in cursive]
[just to the right of her signature are the following four numbers arranged in a diamond starting at the top and going clockwise: 12, 6, 24, 9]

Thanks for writing! Mysticism and Magicka have always been fascinating topics.
I love you daddy ❤️💕