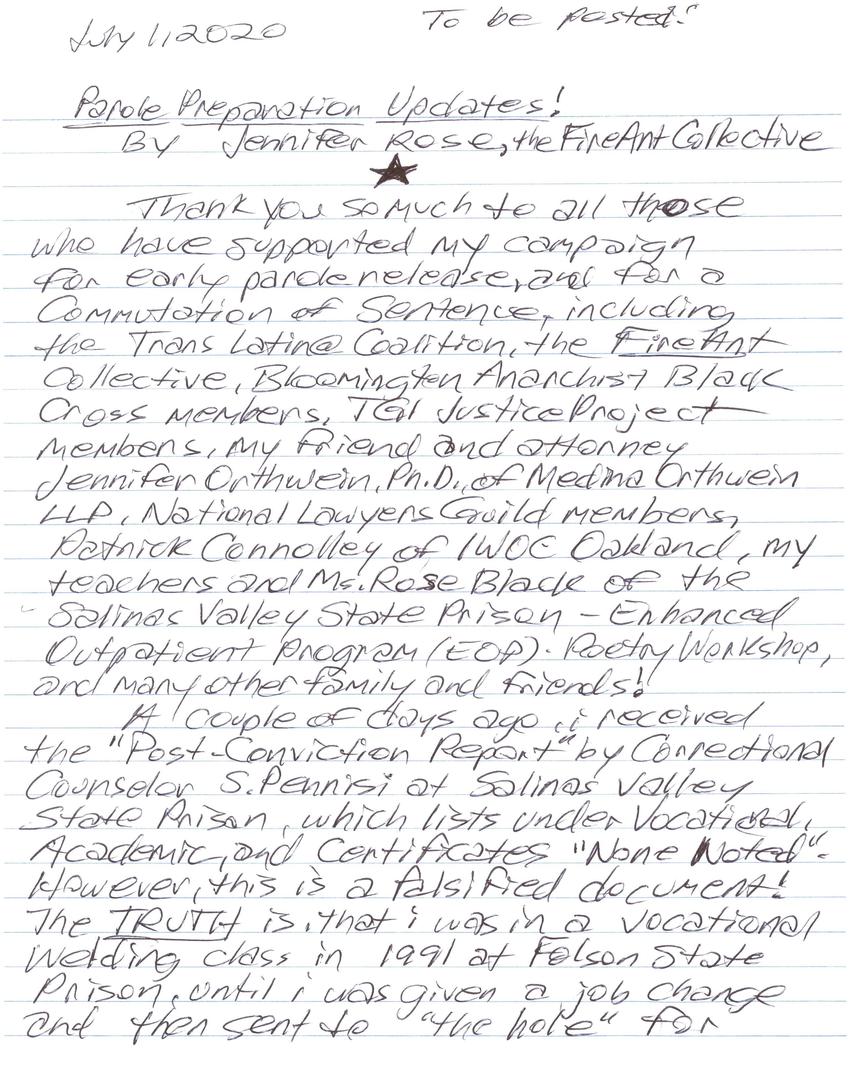 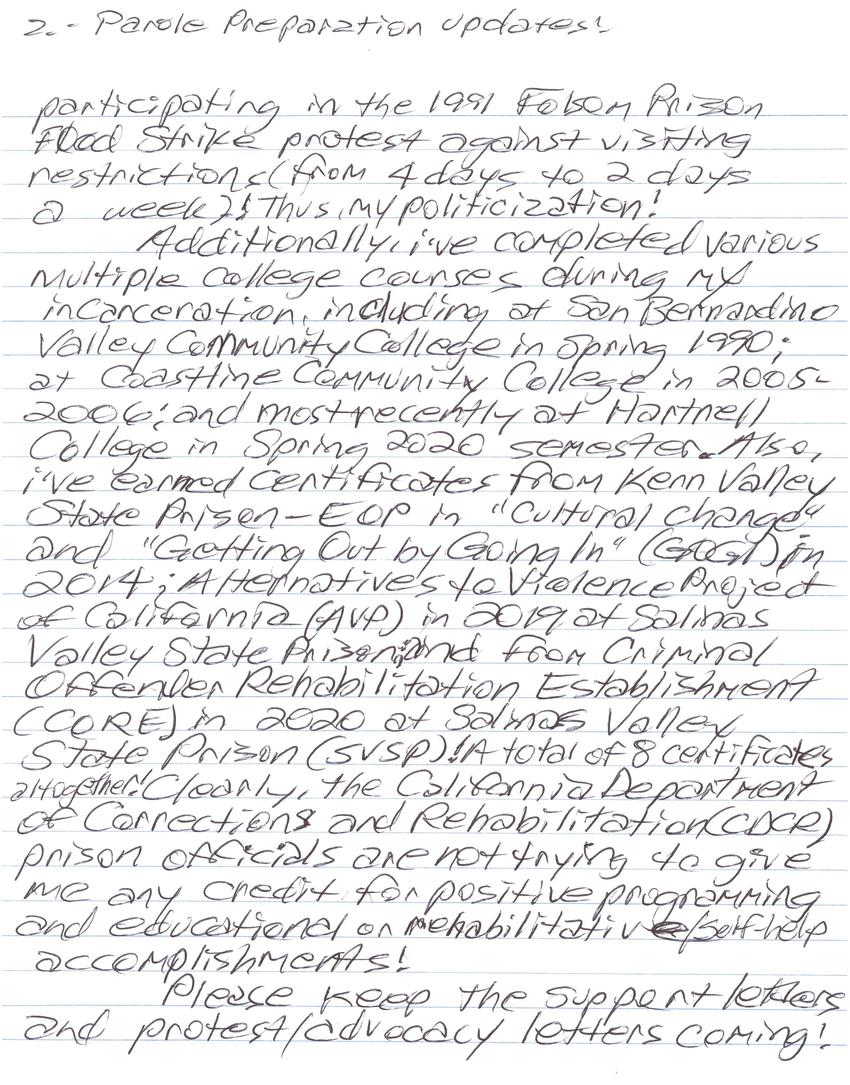 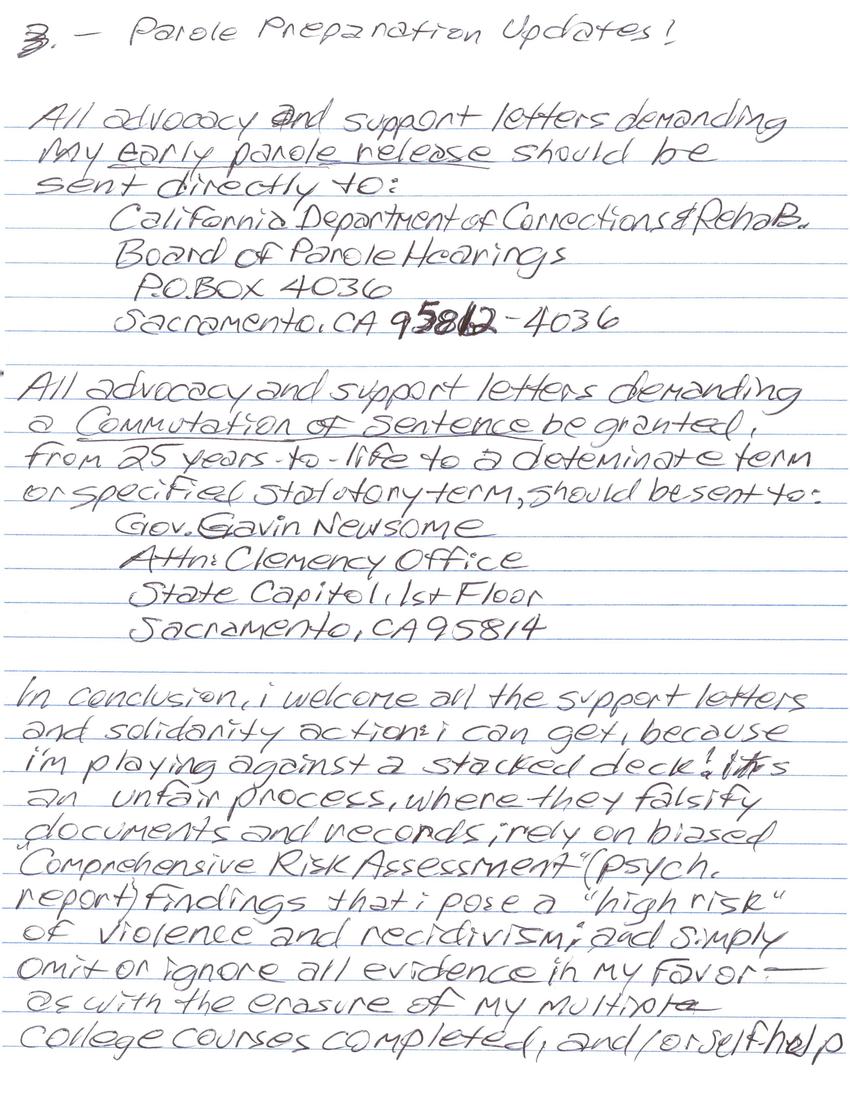 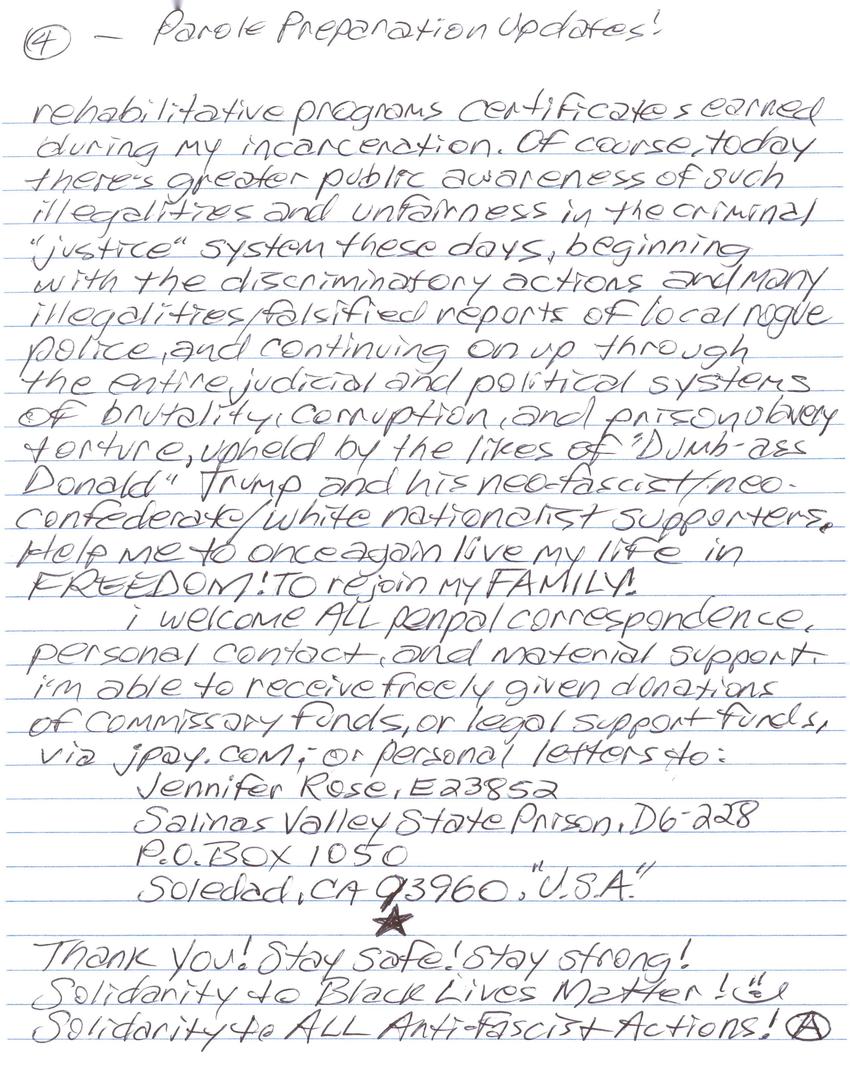 Thank you so much to all those who have supported my campaign for early parole release and for a Commutation of Sentence, including the Trans Latina Coalition, the FIREANT Collective, Bloomington Anarchist Black Cross members, TGI Justice Project members, my friend and attorney, Jennifer Orthwein, Ph.D. of Medina Orthwein LLP, National Lawyers Guild members, Patrick Connolley of IWOE Oakland, my teachers and Ms. Rose Black of the Salinas Valley State Prison - Enhanced Outpatient Program (EOP), Poetry Workshop, and many other family and friends!

A couple of days ago, I received the "Post-Conviction Report" by Correctional Counselor, S. Pennisi at Salinas Valley State Prison, which lists under Vocational Academic and Certificates "None Noted". However, this is a falsified document! The TRUTH is that I was in a vocational welding class in 1991 at Folson State Prison until I was given a job change and then sent to "the hole" for participating in the 1991 Folson Prison Food Strike Protest against visiting restrictions (from 4 days to 2 days a week); thus, my politicization!

Additionally, I've completed various multiple college courses during my incarceration, including at San Bernardino Valley Community College in Spring 1990; at Coastline Community College in 2005-2006; and most recently at Hartnell College in Spring 2020 semester. Also, I've earned certificates from Kenn Valley State Prison - EOP in "Cultural Change" and "Getting Out by Going In" (GOGI) in 2014; Alternatives to Violence Project of California (AVP) in 2019 at Salinas Valley State Prison; and from Criminal Offender Rehabilitation Establishment (CORE) in 2020 at Salinas Valley State Prison (SVSP) - a total of 8 certificates altogether. Clearly, the California Department of Corrections and Rehabilitation (CDCR) prison officials are not trying to give me any credit for positive programming and educational or rehabilitative/self-help accomplishments!

All advocacy and support letters demanding my EARLY PAROLE RELEASE should be sent directly to:

All advocacy and support letters demanding a COMMUTATION OF SENTENCE be granted from 25 years-to-life to a determinate term or specified statutory term, should be sent to:

In conclusion, I welcome all the support letters and solidarity actions I can get, because I'm playing against a stacked deck! It's an unfair process, where they falsify documents and records; rely on biased "Comprehensive Risk Assessment" (psych. report) findings that I pose a "high risk" of violence and recidivism; and simply omit or ignore all evidence in my favor - as with the erasure of my multiple college courses completed, and/or self-help rehabilitative programs certificates earned during my incarceration. Of course, today there's greater public awareness of such illegalities and unfairness in the criminal "justice" system these days, beginning with the discriminatory actions, and many illegalities/falsified reports of local rogue police, and continuing on up through the entire judicial and political systems of brutality, corruption, and prison slavery torture, upheld by the likes of "dumb-ass Donald" Trump and is neo-fascist/neo-confederate/white nationalist supporters. Help me to once again live my life in FREEDOM! TO REJOIN MY FAMILY!

I welcome all pen pal correspondence, personal contact and material support. I'm able to receive freely given donations of commissary funds, or legal support funds, via jpay.com or personal letters to:

Thanks for writing! I finished the transcription for your post. I enjoyed reading about all of the classes you have been able to take to further your education. Keep up the great work and don't give up!!