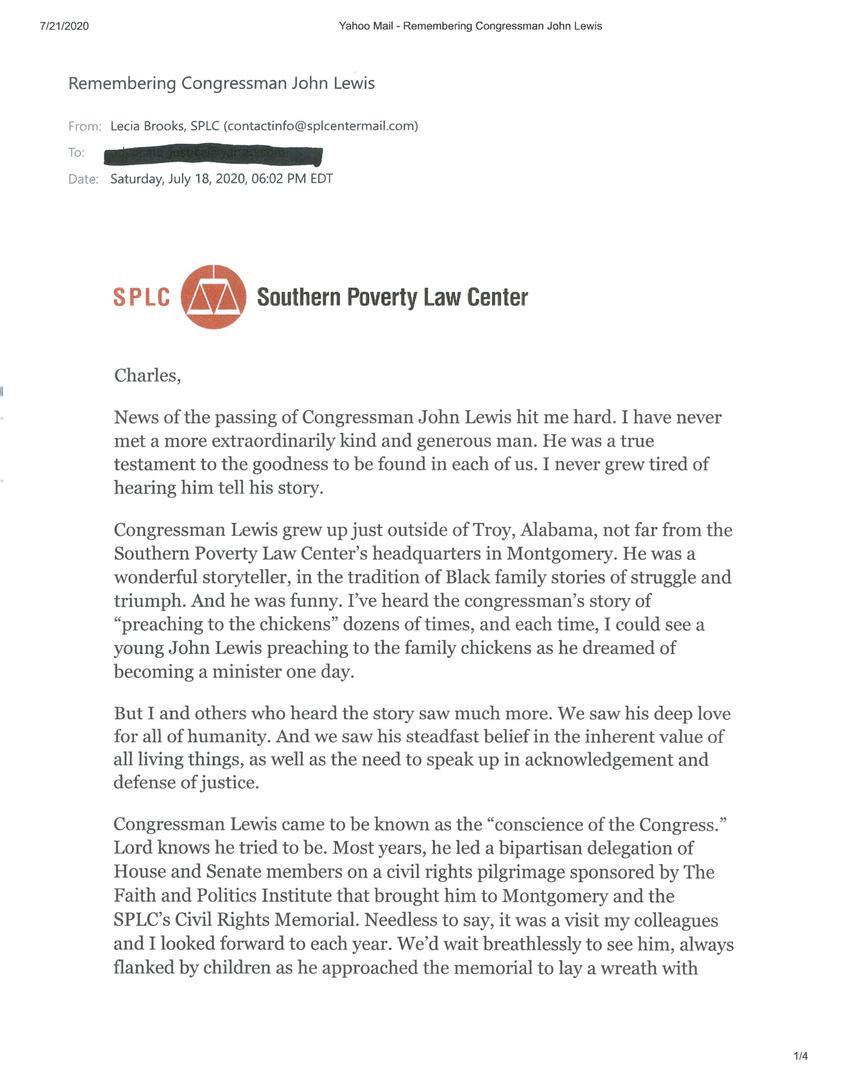 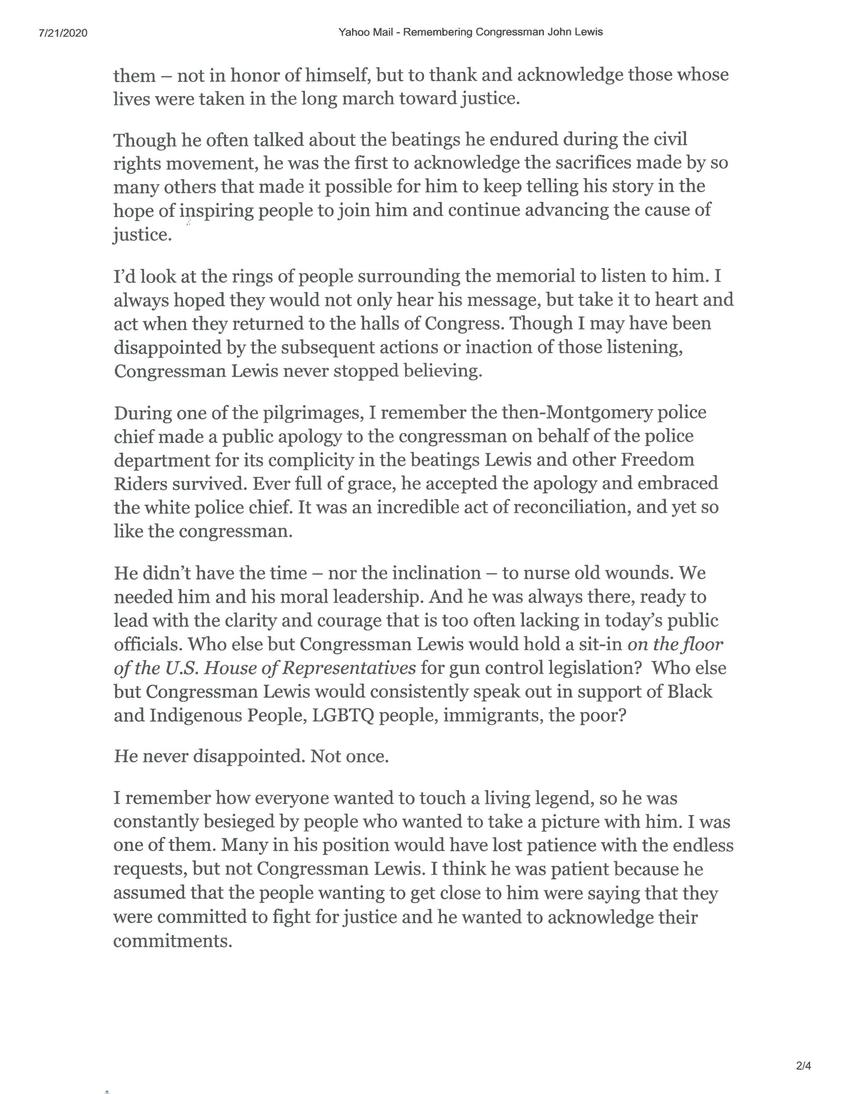 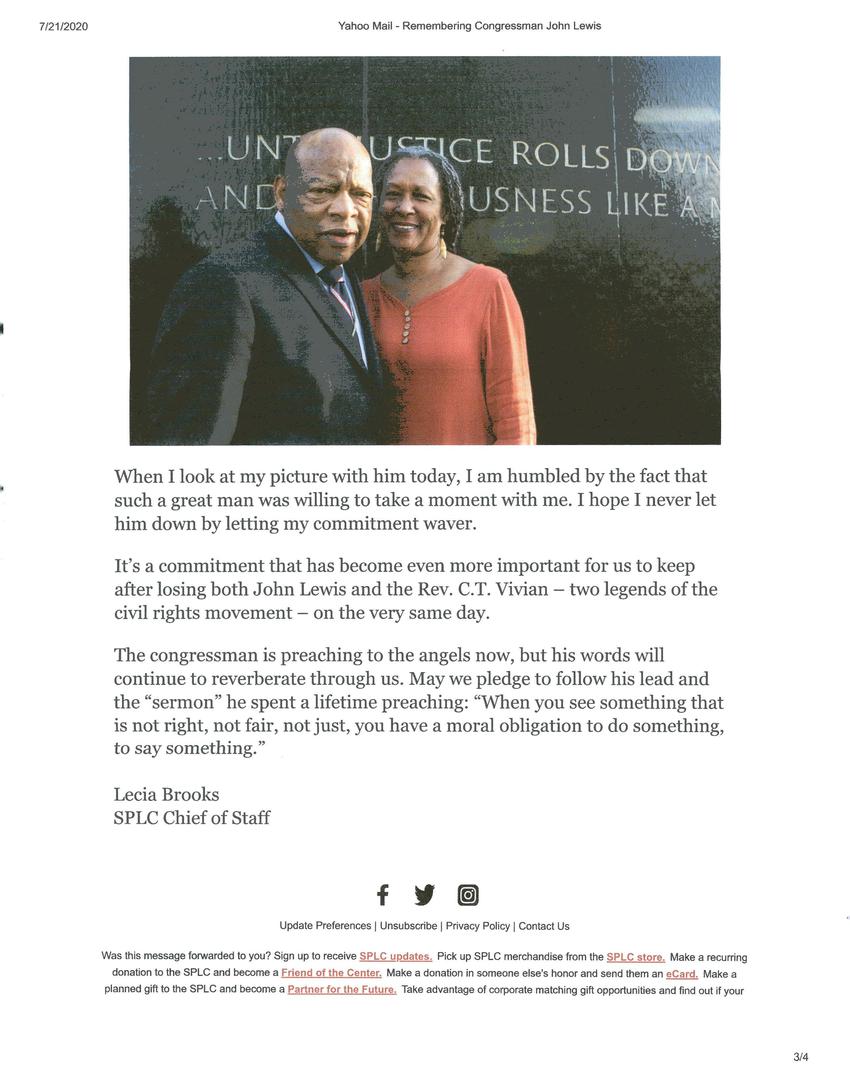 News of the passing of Congressman John Lewis hit me hard. I have never met a more extraordinary kind and generous man. He was a true testament to the goodness to be found in each of us. I never grew tired of hearing him tell his story.

Congressman Lewis grew up just outside of Troy, Alabama, not far from the Southern Poverty Law Center's headquarters in Montgomery. He was a wonderful storyteller, in the tradition of Black family stories of struggle and triumph. And he was funny. I've heard the congressman's story of "preaching to the chickens" dozens of times, and each time, I could see a young John Lewis preaching to the family chickens as he dreamed of becoming a minster one day.

But I and others who heard the story saw much more. We saw his deep love for all of humanity. And we saw his steadfast belief in the inherent value of all living things, as well as the need to speak up in acknowledgment and defense of justice.

Congressman Lewis came to be known as the "conscience of the Congress." Lord knows he tried to be. Most years, he led a bipartisan delegation of House and Senate members on a civil rights pilgrimage sponsored by The Faith and Politics Insititute that brought him to Montgomery and the SPLC's Civil Rights Memorial. Needless to say, it was a visit my colleagues and I looked forward to each year. We'd wait breathlessly to see him, always flanked by children as he approached the memorial to lay a wreath with them — not in honor of himself, but to thank and acknowledge those whose lives were taken in the long march toward justice.

Though he often talked about the beatings he endured during the civil rights movement, he was the first to acknowledge the sacrifices made by so many others that made it possible for him to keep telling his story in the hope of inspiring people to join him and continue advancing the cause of justice.

I'd look at the rings of people surrounding the memorial to listen to him. I always hoped they would not only hear his message, but take it to heart and act when they returned to the halls of Congress. Though I may have been disappointed by the subsequent actions or inaction of those listening, Congressman Lewis never stopped believing.

During one of the pilgrimages, I remember the then-Montgomery police chief made a public apology to the congressman on behalf of the police department for its complicity in the beatings Lewis and other Freedom Riders survived. Ever full of grace, he accepted the apology and embraced the white police chief. It was an incredible act of reconciliation, and yet so like the congressman.

He didn't have the time — nor the inclination — to nurse old wounds. We needed him and his moral leadership. And he was always there, ready to lead with the clarity and courage that is too often lacking in today's public officials. Who else but Congressman Lewis would hold a sit-in on the floor of the U.S. House of Representatives for gun control legislation? Who else but Congressman Lewis would consistently speak out in support of Black and Indigenous People, LGBTQ people, immigrants, the poor?

He never disappointed. Not once.

I remember how everyone wanted to touch a living legend, so he was constantly besieged by people who wanted to take a picture with him. I was one of them. Many in his position would have lost patience with the endless requests, but not Congressman Lewis. I think he was patient because he assumed that the people wanting to get close to him were saying that they were committed to fight for justice and he wanted to acknowledge their commitments.

When I look at my picture with him today, I am humbled by the fact that such a great man was willing to take a moment with me. I hope I never let him down by letting my commitment waver.

It's a commitment that has become even more important for us to keep after losing both John Lewis and the Rev. C.T. Vivian — two legends of the civil rights movement — on the very same day.

The congressman is preaching to the angels now, but his words will continue to reverberate through us. May we pledge to follow his lead and the "sermon" he spent a lifetime preaching: "When you see something that is not right, not fair, not just, you have a moral obligation to do something, to say something."