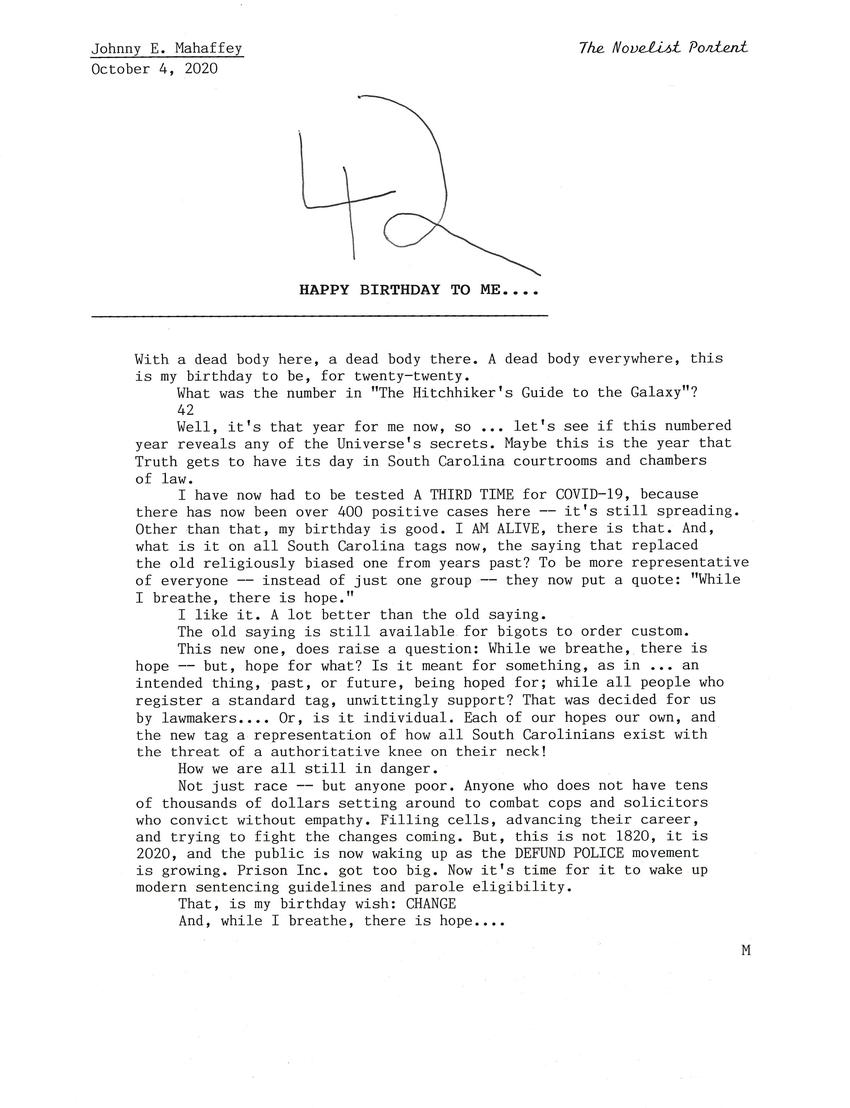 HAPPY BIRTHDAY TO ME....

With a dead body here, a dead body there. A dead body everywhere, this is my birthday to be, for twenty-twenty.

What was the number in "The Hitchhiker's Guide to the Galaxy"?
42
Well, it's that year for me now, so ... lets see if this numbered year reveals any of the Universe's secrets. Maybe this is the year that Truth gets to have its day in South Carolina courtrooms and chambers of law.

I have now had to be tested a THIRD TIME for COVID-19, because there has now been over 400 positive cases here -- it's still spreading. Other than that, my birthday is good. I AM ALIVE, there is that. And, what is it on all South Carolina tags now, the saying that replaced the old religiously biased one from years past? To be more representative of everyone -- instead of one group -- they now put a quote: "While I breathe, there is hope."

I like it. A lot better than the old saying.

The old saying is still available for bigots to order custom.

This new one, does raise a question: While we breathe, there is hope -- but, hope for what? Is it meant for something, as in ... an intended thing, past, or future, being hoped for; while all people who register a standard tag, unwittingly support? That was decided for us by lawmakers.... Or, is it individual. Each of our hopes our own, and the new tag a representative of how all South Carolinians exist with the threat of a authoritative knee on their neck!

How we are all still in danger.

Not just race -- but anyone poor. Anyone who does not have tens of thousands of dollars setting around to combat cops and solicitors who convict without empathy. Filling cells, advancing their career, and trying to fight the changes coming. But, this is not 1820, it is 2020, and the public is now waking up as the DEFUND POLICE movement is growing. Prison Inc. got too big. Now it's time for it to wake up modern sentencing guidelines and parole eligibility.

That, is my birthday wish: CHANGE

HAPPY BELATED BIRTHDAY
And stay safe there
Hello Johnny.
Fellow Libran! It was my birthday on the 1st. I’m too old to even allow my fingers to type out my age here!
Hope you had a great day, and that the year ahead will put you one foot ahead in being released.
T
Thanks for writing! I finished the transcription for your post. I hope you had a wonderful birthday. I also share your hope for reasonable and merciful sentencing guidelines. Take care. - Eva