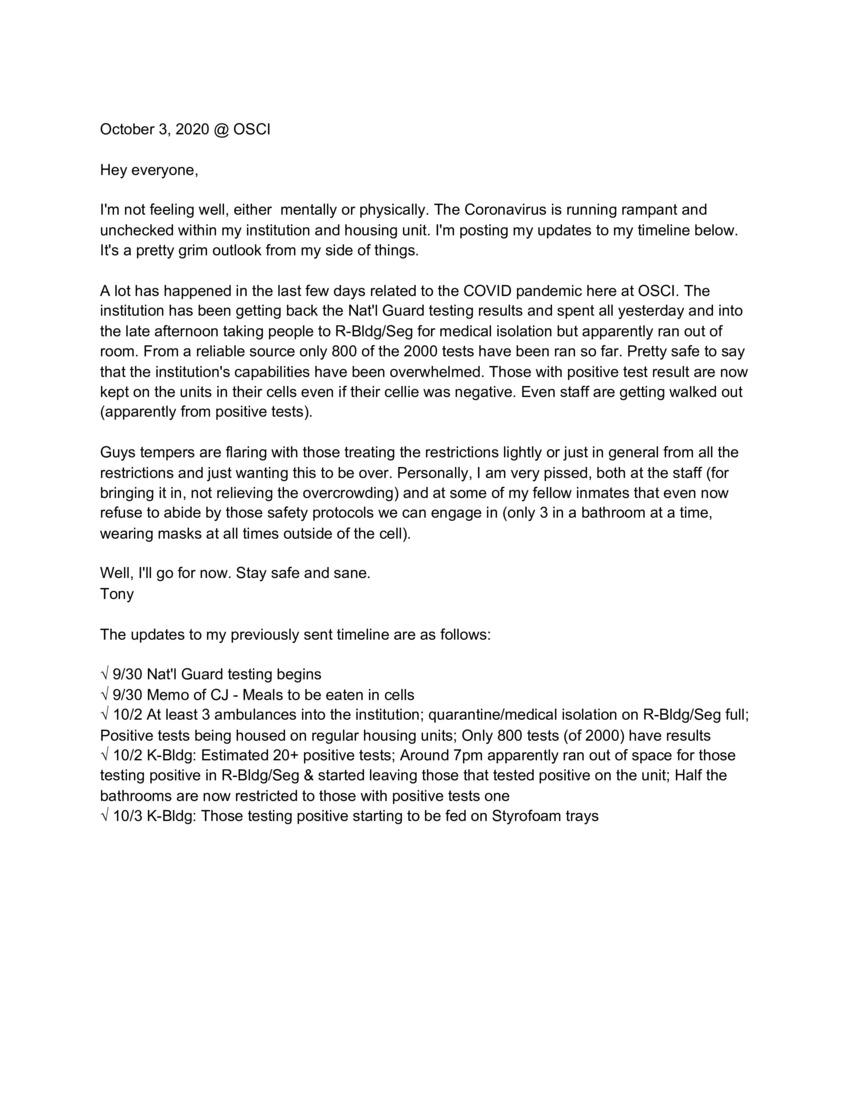 I'm not feeling well mentally or physically. The Coronavirus is running rampant and
unchecked within my institution and housing unit. I'm posting my updates to my timeline below.
It's a pretty grim outlook from my side of things.

A lot has happened in the last few days related to the COVID pandemic here at OSCI. The
institution has been getting back the Nat'l Guard testing results and spent all yesterday and into
the late afternoon taking people to R-Bldg/Seg for medical isolation but apparently ran out of
room. From a reliable source only 800 of the 2000 tests have been run so far. Pretty safe to say
that the institution's capabilities have been overwhelmed. Those with positive test result are now
kept on the units in their cells even if their cellie was negative. Even staff are getting walked out
(apparently from positive tests).

Guys tempers are flaring with those treating the restrictions lightly or just in general from all the
restrictions and just wanting this to be over. Personally, I am very pissed, both at the staff (for
bringing it in, not relieving the overcrowding) and at some of my fellow inmates that even now
refuse to abide by those safety protocols we can engage in (only 3 in a bathroom at a time,
wearing masks at all times outside of the cell).

The updates to my previously sent timeline are as follows:

√ 9/30 Nat'l Guard testing begins
√ 9/30 Memo of CJ - Meals to be eaten in cells
√ 10/2 At least 3 ambulances into the institution; quarantine/medical isolation on R-Bldg/Seg full;
Positive tests being housed on regular housing units; Only 800 tests (of 2000) have results
√ 10/2 K-Bldg: Estimated 20+ positive tests; Around 7pm apparently ran out of space for those
testing positive in R-Bldg/Seg & started leaving those that tested positive on the unit; Half the
bathrooms are now restricted to those with positive tests on
√ 10/3 K-Bldg: Those testing positive starting to be fed on styrofoam trays

Hello Tony.
Thing is it’s regular flu season now. The death toll from regular flu is approximately 200,000 Americans a year. And this is regular flu, not coronavirus. Do you get flu shots in prisons. In the U.K. most people have it. Flu can really mess with you. I know a guy whose girlfriend died from flu, she was only 25. It’s if it gets into your lungs and you get pneumonia or pleurisy. Creating some kind of lung exercising machine might help. In hospital they have that ping pong ball sucking up a hose thing. Or the expelling air tube thing. Just something with a bit of resistance that your lungs can challenge.
The weather has deteriorated here in the U.K. it truly is Autumn now. I have a broken boiler and a leaky roof, so it ain’t looking good here. I read about the conditions in Mississippi jails with the brown water, mould growing and wildlife running rampant in the halls. If that happened in a U.K. jail, the inmates would be millionaires, the prison system is open for law suits. But unfortunately for you you are living in Penitentiary PLC.
Hope the situation lifts for you soon. I’m sure it will. Keep writing, keep the world aware of what goes on behind the walls.
T
Thanks for writing! I finished the transcription for your post. Sorry to hear about how things are being handled with COVID where you are. It's not much, but here's a dumb joke:

"I went to a psychic.

I knocked on her front door. 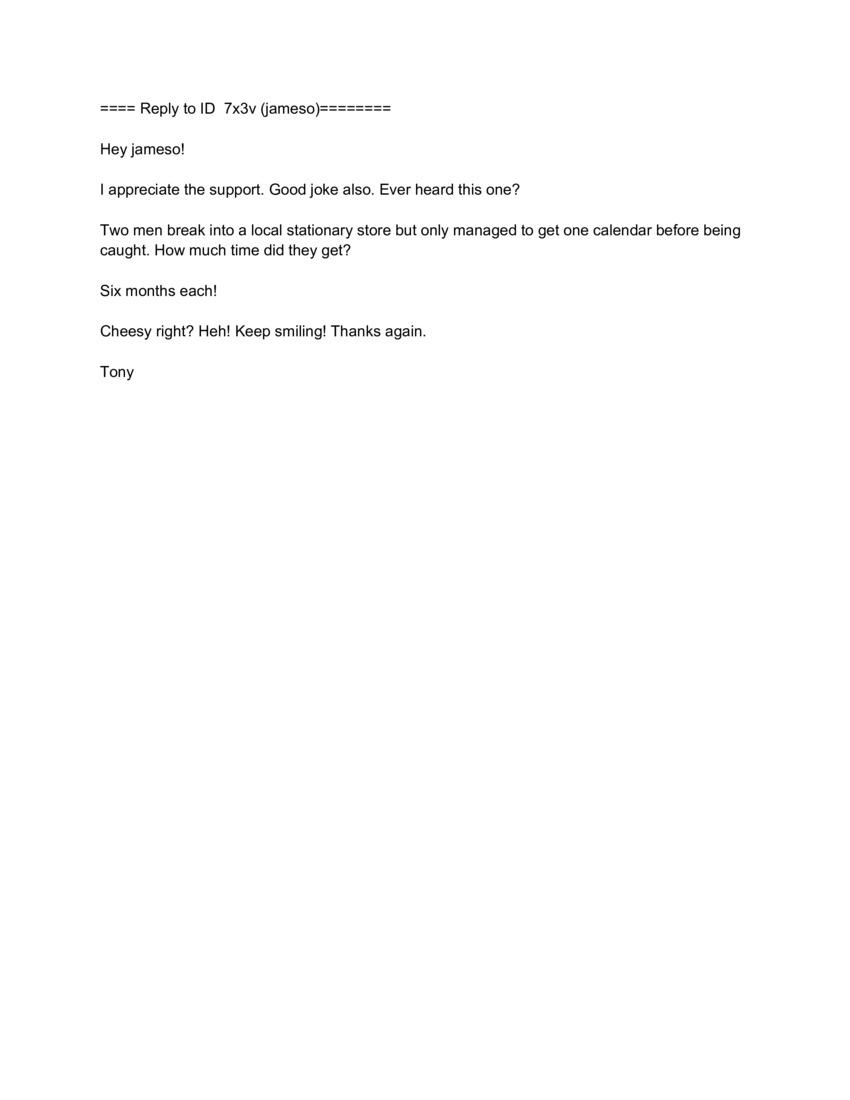 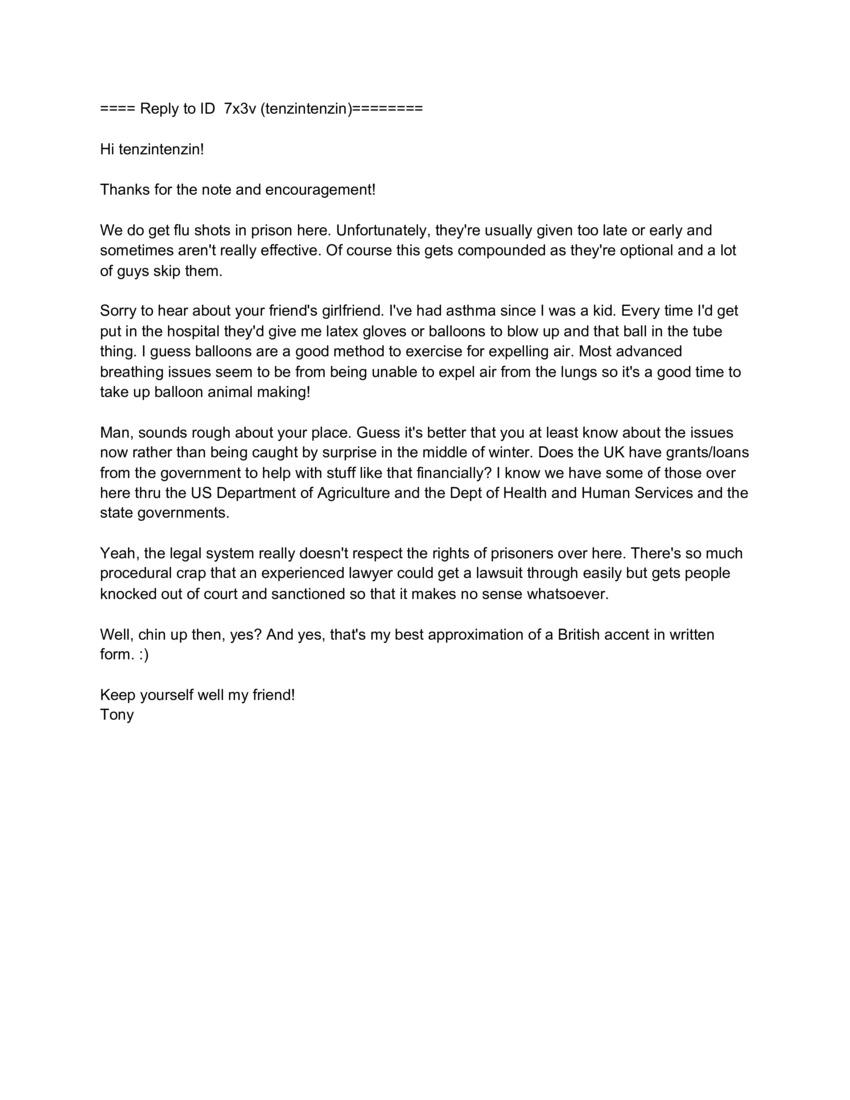