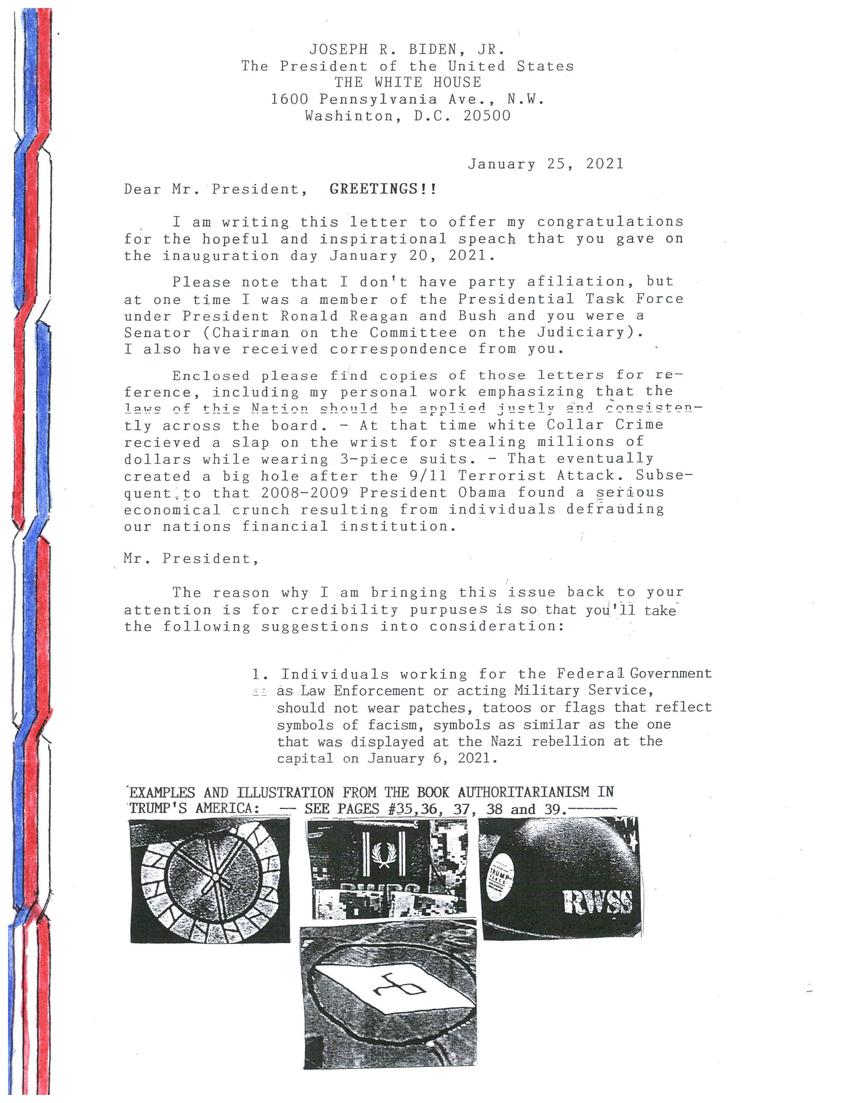 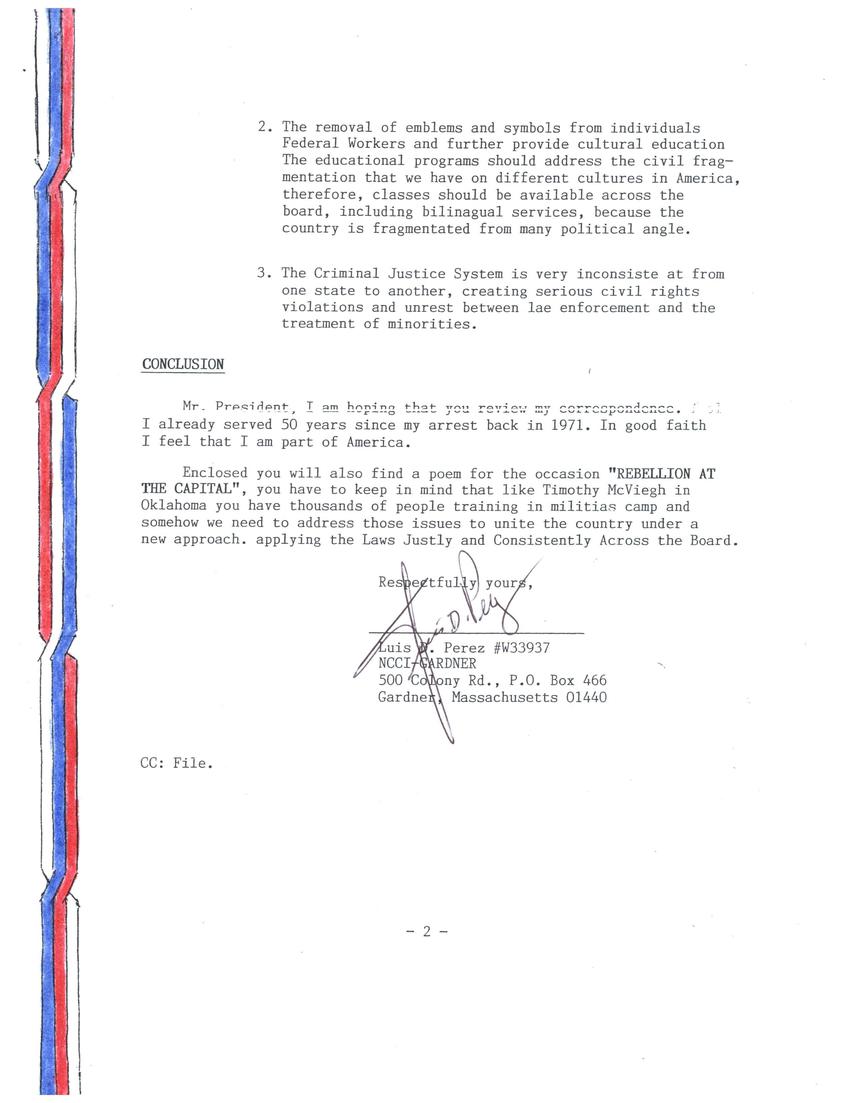 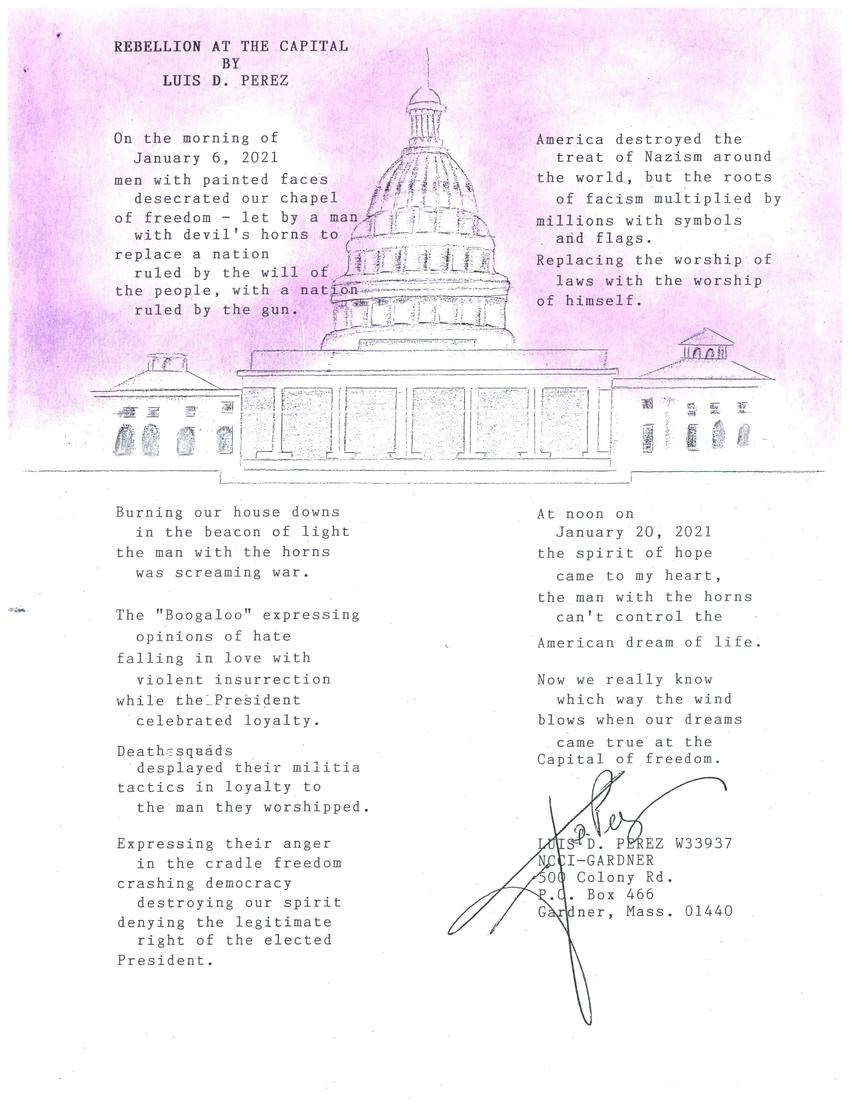 I am writing this letter to offer my congratulations for the hopeful and inspirational speech that you gave on the inauguration day January 20, 2021.

Please note that I don't have party affiliation, but at one time I was a member of the Presidential Task Force under President Ronald Reagan and Bush and you were a Senator (Chairman on the Committee on the Judiciary). I also have received correspondence from you.

Enclosed please find copies of those letters for reference, including my personal work emphasizing that the laws of this Nation should be applied justly and consistently across the board. - At that time white Collar Crime received a slap on the wrist for stealing millions of dollars while wearing 3-piece suits. - That eventually created a big hole after the 9/11 Terrorist Attack. Subsequent to that 2008-2009 President Obama found a serious economical crunch resulting from individuals defrauding our nations financial institution.

The reason why I am bringing this issue back to your attention is for credibility purposes is so that you'll take the following suggestions into consideration:

1. Individuals working for the Federal Government as Law Enforcement or acting Military Service, should not wear patches, tattoos or flags that reflect symbols of fascism, symbols as similar as the one that was displayed at the Nazi rebellion at the capital on January 6, 2021.

EXAMPLES AND ILLUSTRATION FROM THE BOOK AUTHORITARIANISM IN TRUMP'S AMERICA: - SEE PAGES #35, 36, 37, 38 and 39.
[images of examples of hateful symbols]

2. The removal of emblems and symbols from individuals Federal Workers and further provide cultural education The educational programs should address the civil fragmentation that we have on different cultures in America, therefore, classes should be available across the board, including bilingual services, because the country is fragmented from many political angle.

3. The Criminal Justice System is very inconsistent from one state to another, creating serious civil rights violations and unrest between law enforcement and the treatment of minorities.

Mr. President, I am hoping that you review my correspondence. I already served 50 years since my arrest back in 1971. In good faith I feel that I am part of America.

Enclosed you will also find a poem for the occasion "REBELLION AT THE CAPITAL", you have to keep in mind that like Timothy McViegh in Oklahoma you have thousands of people training in militias camp and somehow we need to address those issues to unite the country under a new approach. applying the Laws Justly and Consistently Across the Board.

REBELLION AT THE CAPITAL
BY
LUIS D. PEREZ

America destroyed the
treat of Nazism around
the world, but the roots
of facism multiplied by
millions with symbols
and flags.
Replacing the worship of
laws with the worship
of himself.

Burning our house downs
in the beacon of light
the man with the horns
was screaming war.

The "Boogaloo" expressing
opinions of hate
falling in love with
violent insurrection
while the President
celebrated loyalty.

Death squads
displayed their militia
tactics in loyalty to
the man they worshipped.

Expressing their anger
in the cradle freedom
crashing democracy
destroying our spirit
denying the legitimate
right of the elected
President.

At noon on
January 20, 2021
the spirit of hope
came to my heart,
the man with the horns
can't control the
American dream of life.

Now we really know
which way the wind
blows when our dreams
came true at the
Capital of freedom.