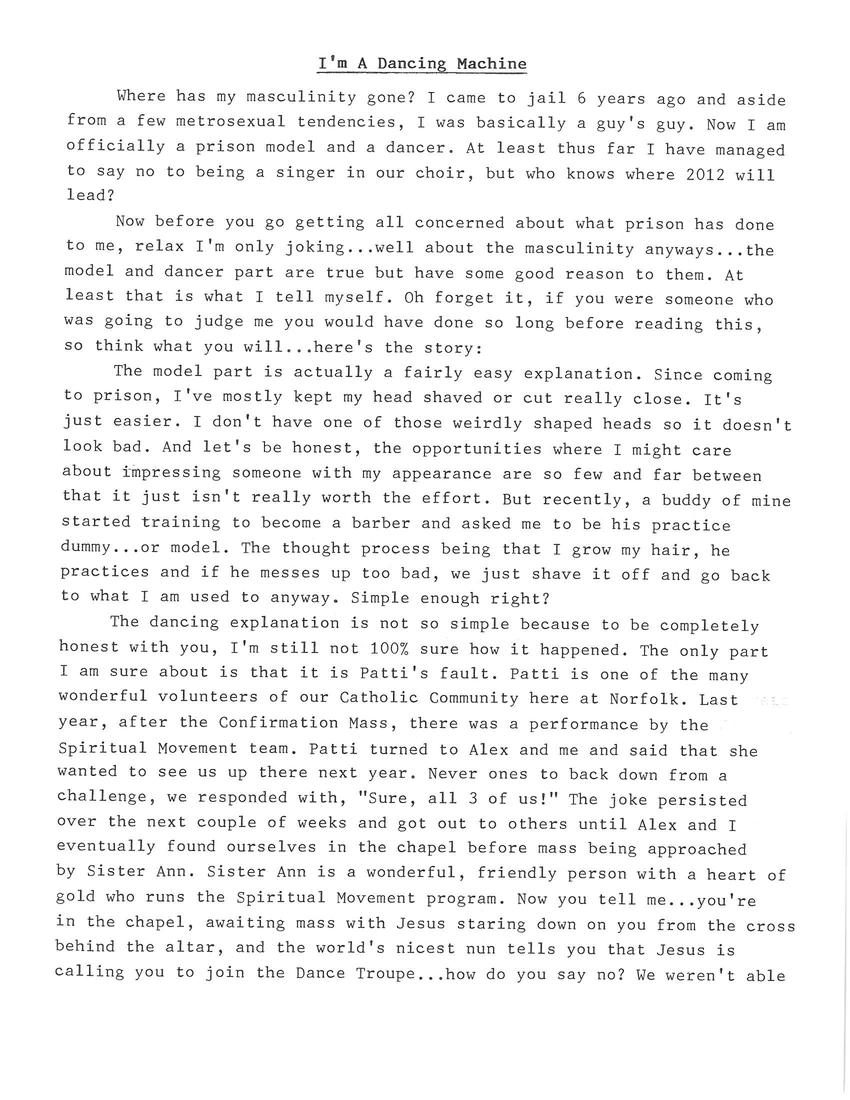 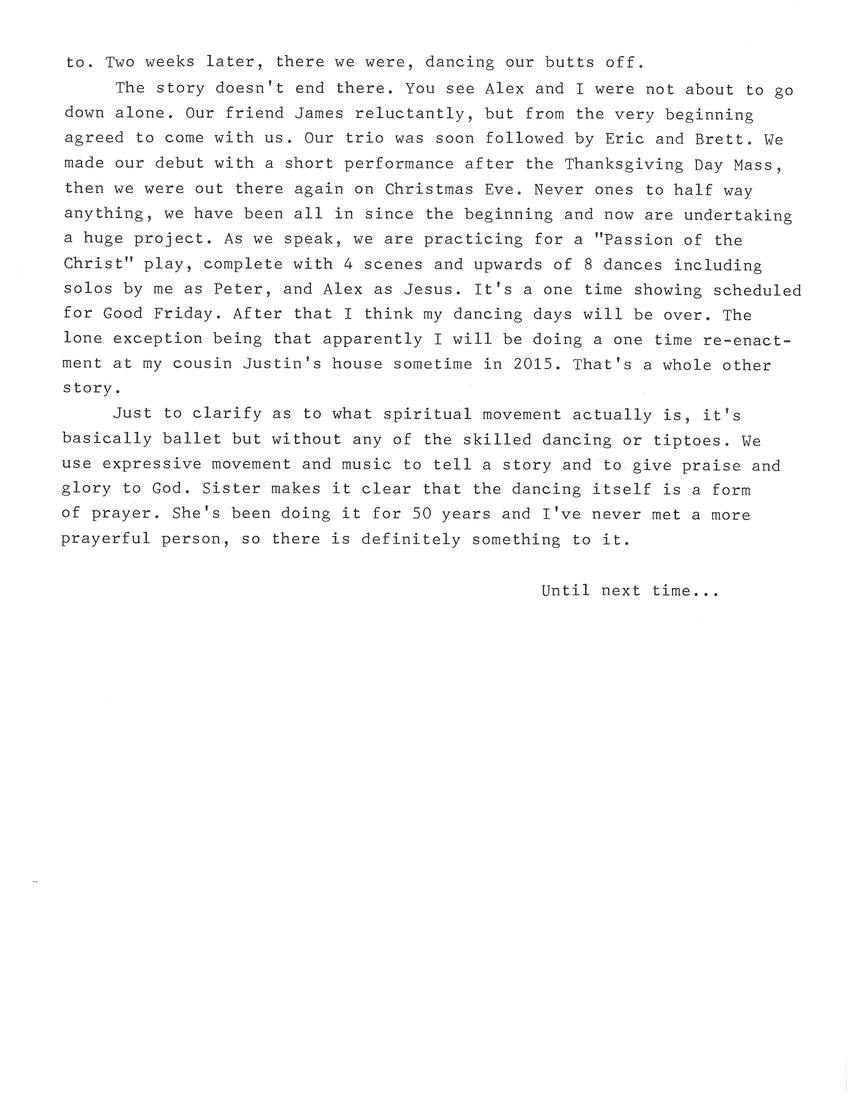 Where has my masculinity gone? I came to jail 6 years agoand aside from a few metrosexual tendencies, I was basically a guy's guy. Now I am officially a prison model and a dancer. At least thus far I have nmanaged to say no to being a singer inour choir, but who knows where 2012 will lead?

Now before you go getting all concerned about what prison has done to me, relax I'm only joking...well about the masculinit anyways...the model and dancer part are true but have some good reason to them. At least tha is what i tell mself. Oh forget it, if you were someone who was going to judge me you would have done so long before reading this, so think what you will...here's the story.

The model part is actually a fairly easy explanation. Since coming to prison, I've mostly kept my head shaved or cut really close. It's just easier. I don't have one of those weirdly shaped heads so it doesn't look bad. And let's be honest, the opportunities where I might care about impressing someone with my appearance are so few and far between that it just ins't worth the effort. But recently, a buddy of mine started training to become a barber and asked me to be his practice dummy... or model. The thought process being that I grow my hair, he practices and if he messes up too bad, we just shave it off and go back to what I am used to anyway. Simple enough right?

The dacing explnation is not so simple becaue to be completely honest with you, I'm not sure how it happened. The only part I am sure about is that it is Patti's fault. Patti is one of the many wonderful volunteers of our Catholic Communty here at Norfolk. Last Spiritual Movement team. Patti turned to Alex and me and said that she wanted to see us up there next year. Never ones to back down from challenge, we responded with, "Sure, all 3 of us!" The joke persisted over the next couple of weeks and got out to others until Alex and I eventually found ourselves in the chapel before mass being approached by Sister Ann. Sister Ann is a wonderful, friendly person with a heart of gold who runs the Spiritual Movement program. Now you tell me...you're in the chapel, awaiting mass with Jesus staring downon you from the cross beehind the altar, and the world's nicest nun tells you that Jesus is calling you to join the Dance Troupe... how do you say no? We wern't able to. Two weeks later, there we were, dancing our butts off.

The story doesn't end there. You see Alex and I were not about to go down alone. Our friend James relunctantly, but from the very beginning agreed to come with us. Our trio was soon followed by Eric and Brett. We made our debut with a short performance after the Thanksgiving Day Mass, then we were out there again on Christmas Dve. Never ones to half way anything, we have been all in since the beginning and now are undertaking a huge project. As we speak, we are praticing for a "Passion of the Christ" play, complete with 4 scenes and upwards of 8 dances including solos by me as Peter, and Alex as Jesus. It's a one time showing scheduled for Good Friday. After that I think my dancing days will be over. The lone exception beng that apparantly I will be doing a one time re-enactment at my cousins Justin's house sometime in 2015. That's a whole other story.

Just to clarify as to what spiritual movement actually is, it's basically ballet but without any of the skilled dancing or tiptoes. We use xpressive movement and music to tell a story and to give praise and glory ro God. sister makes it clear that the dancing itself i a form or prayer. She's been doing it for 50 years and I've never met a more prayerful person, so there is definitely something in it.

Thanks for writing! I finished the transcription for your post.
Again, I'm waiting for a video of this...;)
Your cousin found the riht me Hey how are you ? You would never believe that I' m a grandfather. The are times I miss your friendship. I hope that you have found the person I always saw when I was with you. Your cell ate is beatiful . Tom
What a story.....It sounds like fun. I will definitely be at Justin's house in 2015 to see the re-enactment...looking forward to it. Love Ya!!!
Hey bro. It's Frank. I'm going to keep this one short because I don't really know how this works. Obviously first time in this venture. If you see this, let me know and I will write longer.
Bobby,

I cannot believe that Sr. Anne finally got you!! I wish that I could see it. The part that really gets me, is Alex as Jesus. That is amazing. You are really having a positive effect on him. God bless you, my brother and friend. When I see Patty this Sunday, at St. Basil's, I am going to tell her that I read this. Have a blessed Lent.
Bob it all sounds just great to me.keep dancing, keep praying and GOD BLESS YOU..All my love Aunty Loretta
(scanned reply – view as blog post)
uploaded March 8, 2012.  Original (PDF) 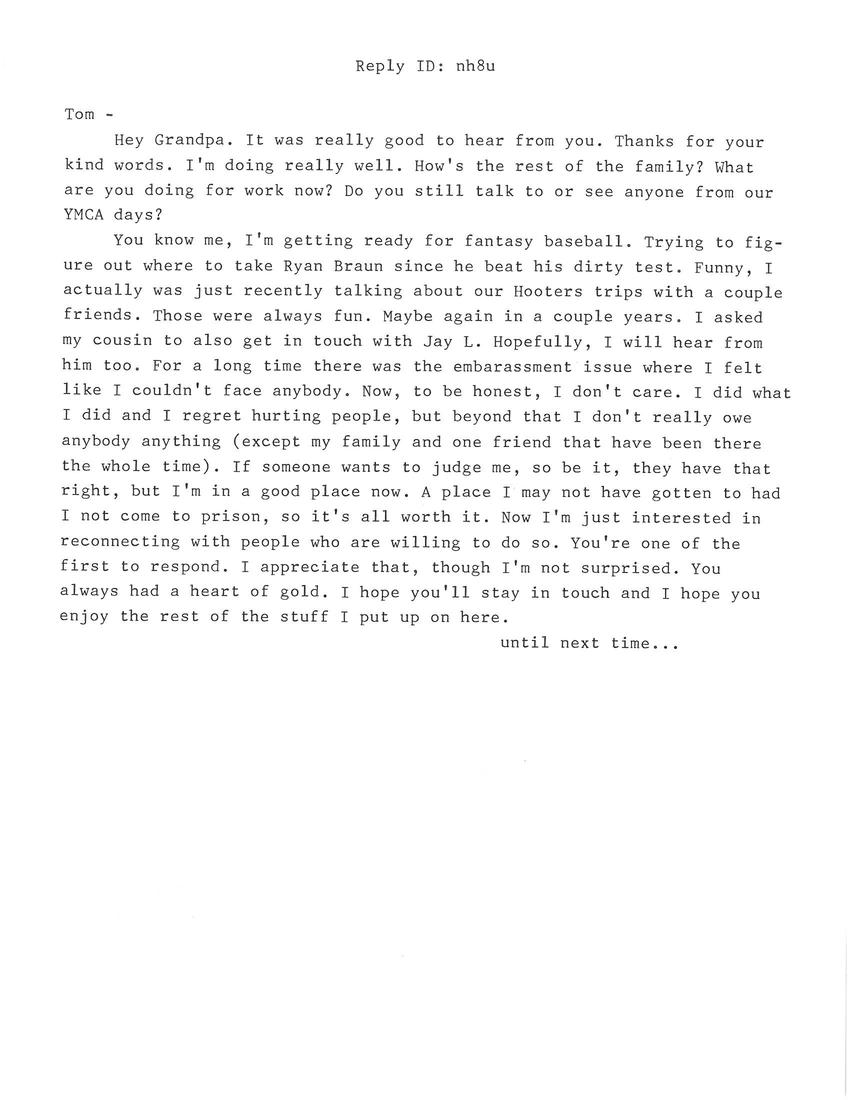 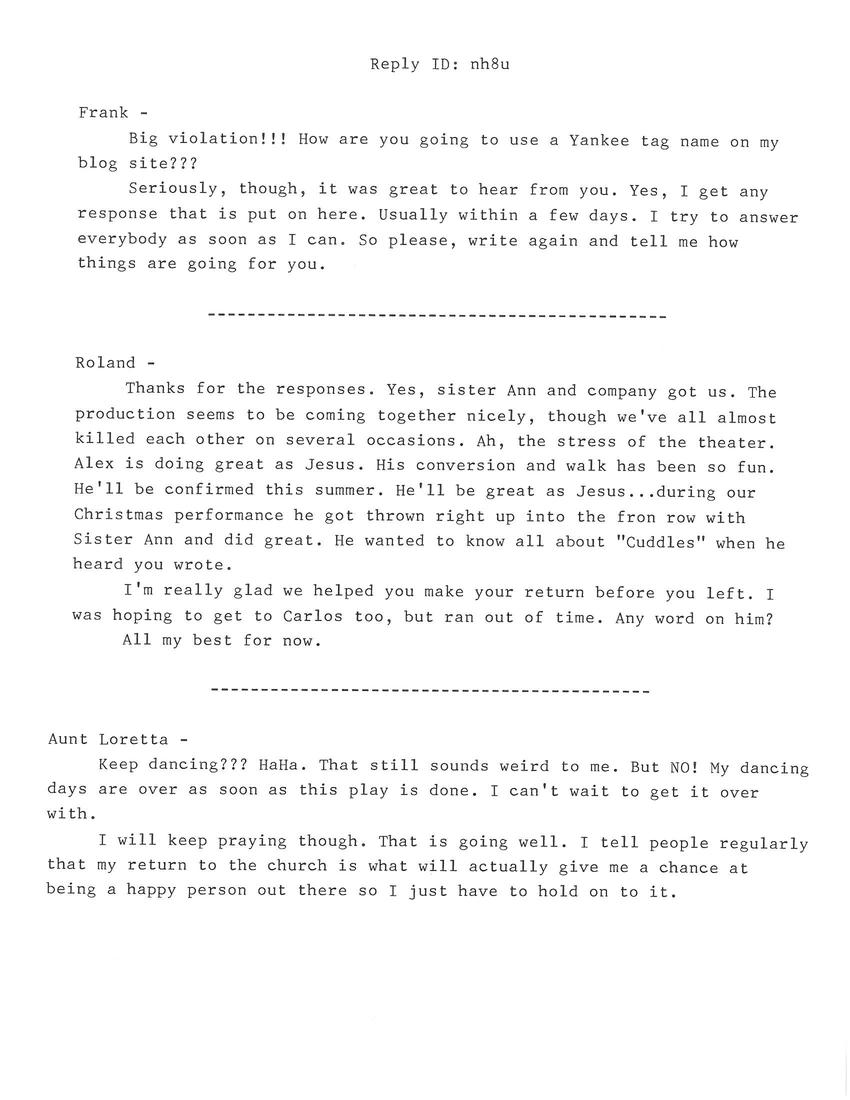 I am glad that you are doing well and I am excited to hear about Alex. You both are in my prayers, especially Alex, as I know that he will face some big challenges as he approaches his confirmation. Let him know that "cuddles" is doing very well, both in school and professionally. Recently, I have received A's in two of my classes, giving me a 3.92 GPA and was promoted at work to Kiosk Manager and Area Trainer.

Carlos is finally out and doing well. He is living in Millis, near Sister Ruth and is working at the Hope Chest. We tried to get him, as well, and seemed to be making progress but after I left, he lost interest. He is Sister Ruth's and Sister Kathleen's hands now.

Keep up the good work, my Brother and let the men know, especially Alex, James, and Greg, that they are in my thoughts and prayers.