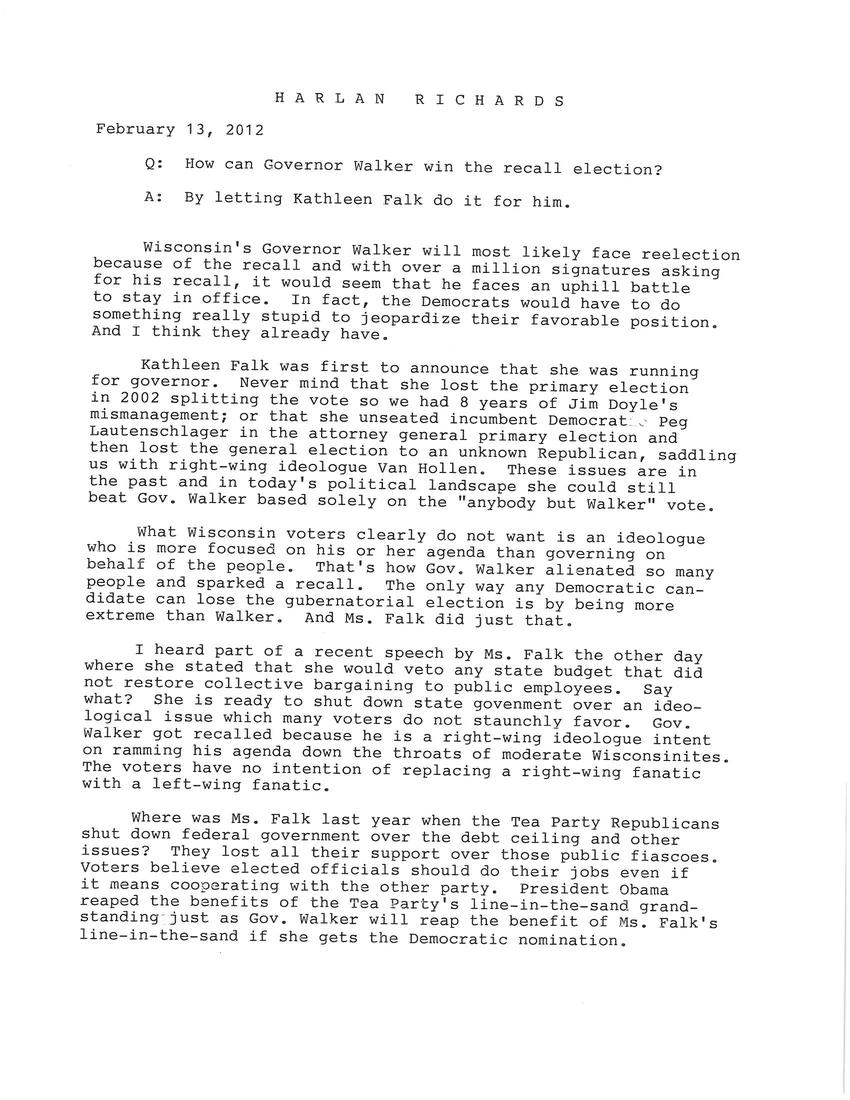 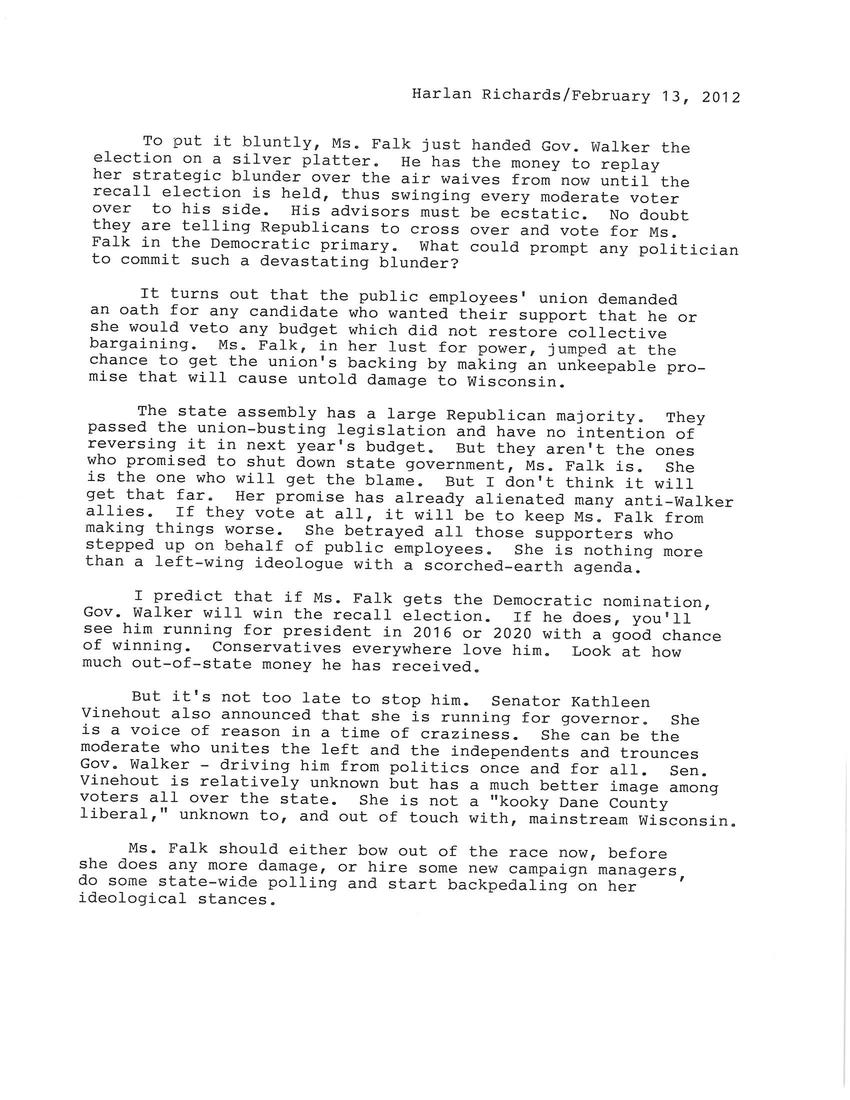 Q: How can Governor Walker win the recall election?

A: By letting Kathleen Falk do it for him.

Wisconsin's Governor Walker will most likely face reelection because of the recall and with over a million signatures asking for his recall, it would seem that he faces an uphill battle to stay in office. In fact, the Democrats would have to do something really stupid to jeopardize their favorable position. And I think they already have.

Kathleen Falk was first to announce that she was running for governor. Never mind that she lost the primary election in 2002, splitting the vote so we had 8 years of Jim Doyle's mismanagement; or that she unseated incumbent Democrat, Peg Lautenschlager in the attorney general primary election and then lost the general election to an unknown Republican, saddling us with right-wing ideologue Van Hollen. These issues are in the past and in today's political landscape she could still beat Gov. Walker based solely on the "anybody but Walker" vote.

What Wisconsin voters clearly do not want is an ideologue who is more focused on his or her agenda than governing on behalf of the people. That's how Gov Walker alienated so many people and sparked a recall. The only way any Democratic candidate can lose the gubernatorial election is by being more extreme than Walker. And Ms. Falk did just that.

I heard part of a recent speech by Ms. Falk the other day where she stated that she would veto any state budget that did not restore collective bargaining to public employees. Say what? She is ready to shut down state government over an ideological issue which many voters do not staunchly favor. Gov. Walker got recalled because he is a right-wing ideologue intent on ramming his agenda down the throats of moderate Wisconsinites. The voters have no intention of replacing a right-wing fanatic with a left-wing fanatic.

Where was Ms. Falk last year when the Tea Party Republicans shut down federal government over the debt ceiling and other issues? They lost all their support over those public fiascoes. Voters believe elected officials should do their jobs even if it means cooperating with the other party. President Obama reaped the benefits of the Tea Party's line-in-the-sand grandstanding just as Gov. Walker will reap the benefit of Ms. Falk's line-in-the-sand if she gets the Democratic nomination.

To put it bluntly, Ms. Falk just handed Gov. Walker the election on a silver platter. He has the money to replay her strategic blunder over the air waves from now until the recall election is held, thus swinging every moderate voter over to his side. His advisors must be ecstatic. No doubt they are telling Republicans to cross over and vote for Ms. Falk in the Democratic primary. What could prompt any politician to commit such a devastating blunder?

It turns out that the public employees' union demanded an oath for any candidate who wanted their support that he or she would veto any budget which did not restore collective bargaining. Ms. Falk, in her lust for power, jumped at the chance to get the union's backing by making an unkeepable promise that will cause untold damage to Wisconsin.

The state assembly has a large Republican majority. They passed the union-busting legislation and have no intention of reversing it in next year's budget. But they aren't the ones who promised to shut down state government, Ms. Falk is. She is the one who will get the blame. But I don't think it will get that far. Her promise has already alienated many anti-Walker allies. If they vote at all, it will be to keep Ms. Falk from making things worse. She betrayed all those supporters who stepped up on behalf of public employees. She is nothing more than a left-wing ideologue with a scorched-earth agenda.

I predict that if Ms. Falk gets the Democratic nomination, Gov. Walker will win the recall election. If he does, you'll see him running for president in 2016 or 2020 with a good chance of winning. Conservatives everywhere love him. Look at how much out-of-state money he has received.

But it's not too late to stop him. Senator Kathleen Vinehout also announced that she is running for governor. She is a voice of reason in a time of craziness. She can be the moderate who unites the left and the independents and trounces Gov. Walker - driving him from politics once and for all. Sen. Vinehout is relatively unknown but has a much better image among voters all over the state. She is not a "kooky Dane County liberal", unknown to, and out of touch with, mainstream Wisconsinites.

Ms. Falk should either bow out of the race now, before she does any more damage, or hire some new campaign managers, do some state-wide polling and start backpedaling on her ideological stances.