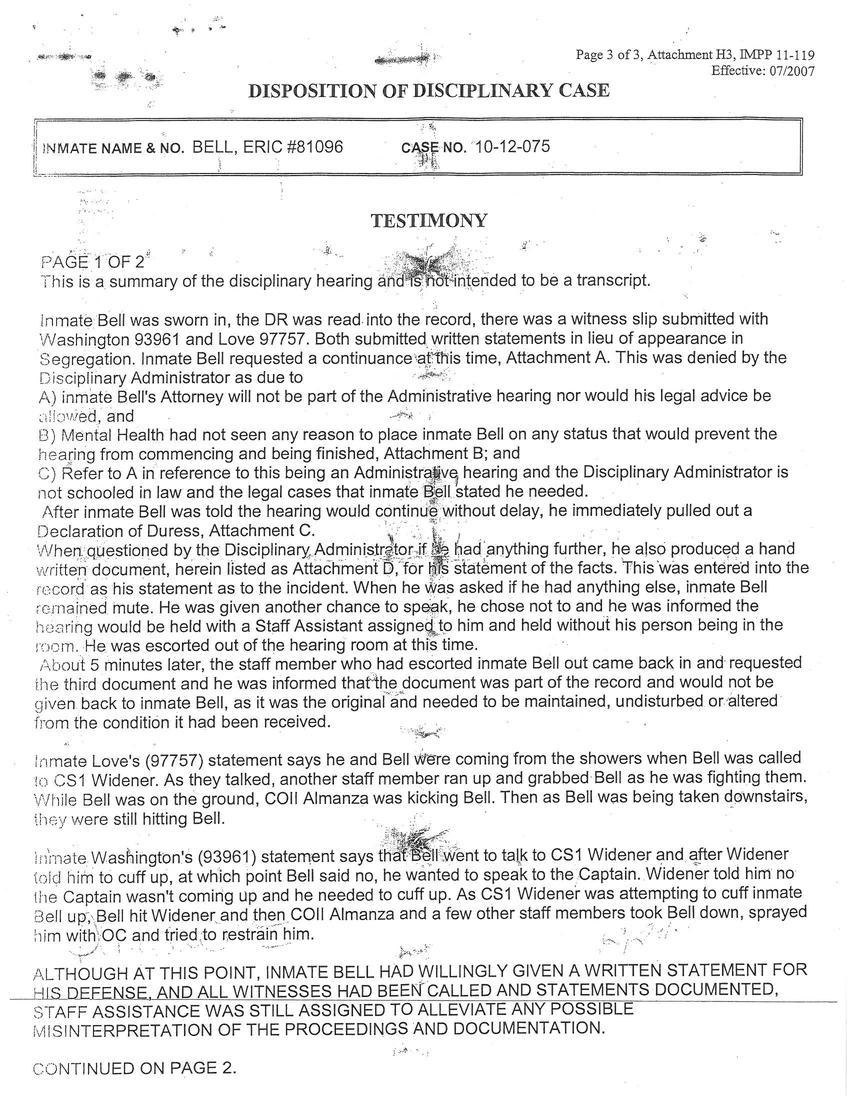 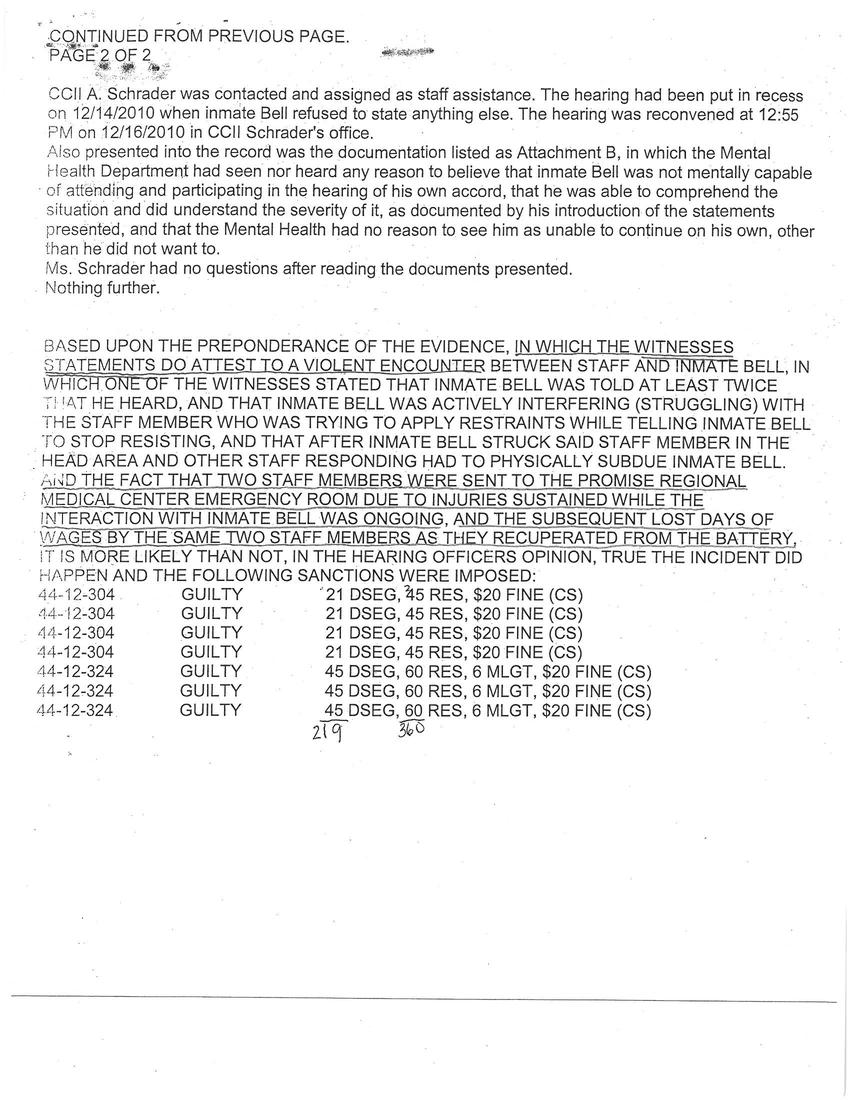 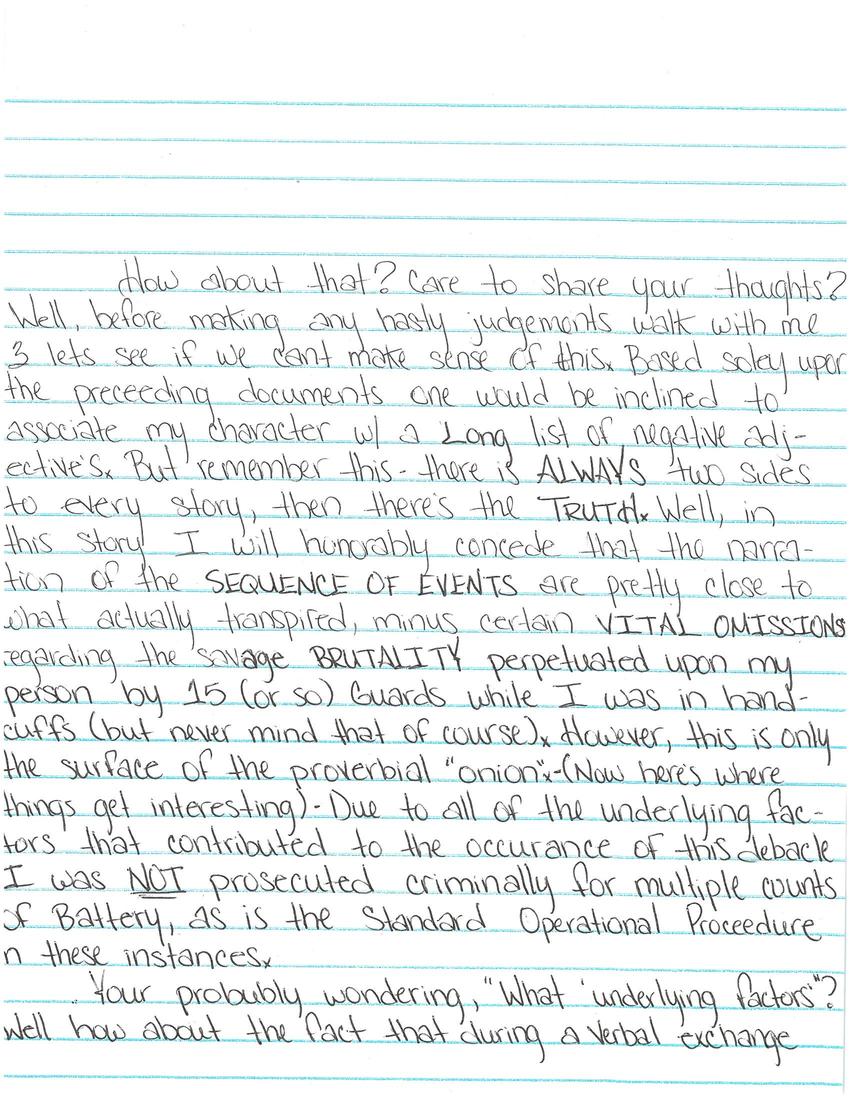 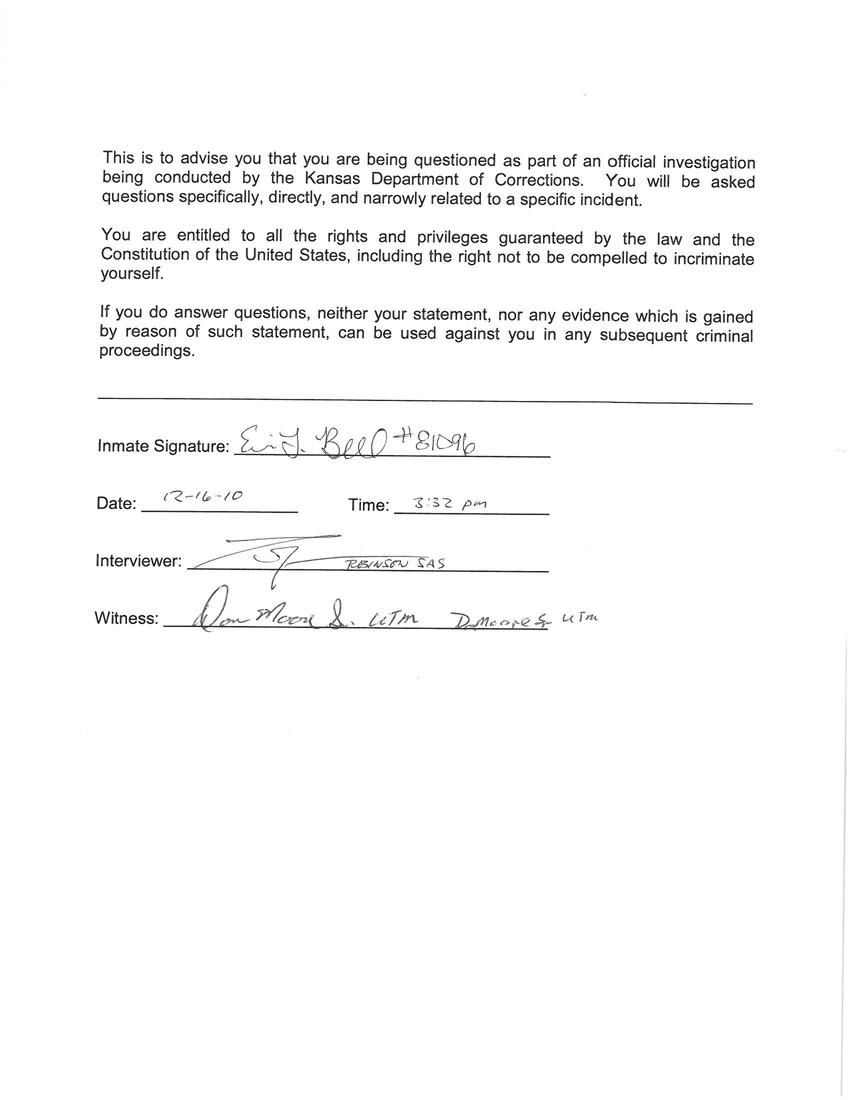 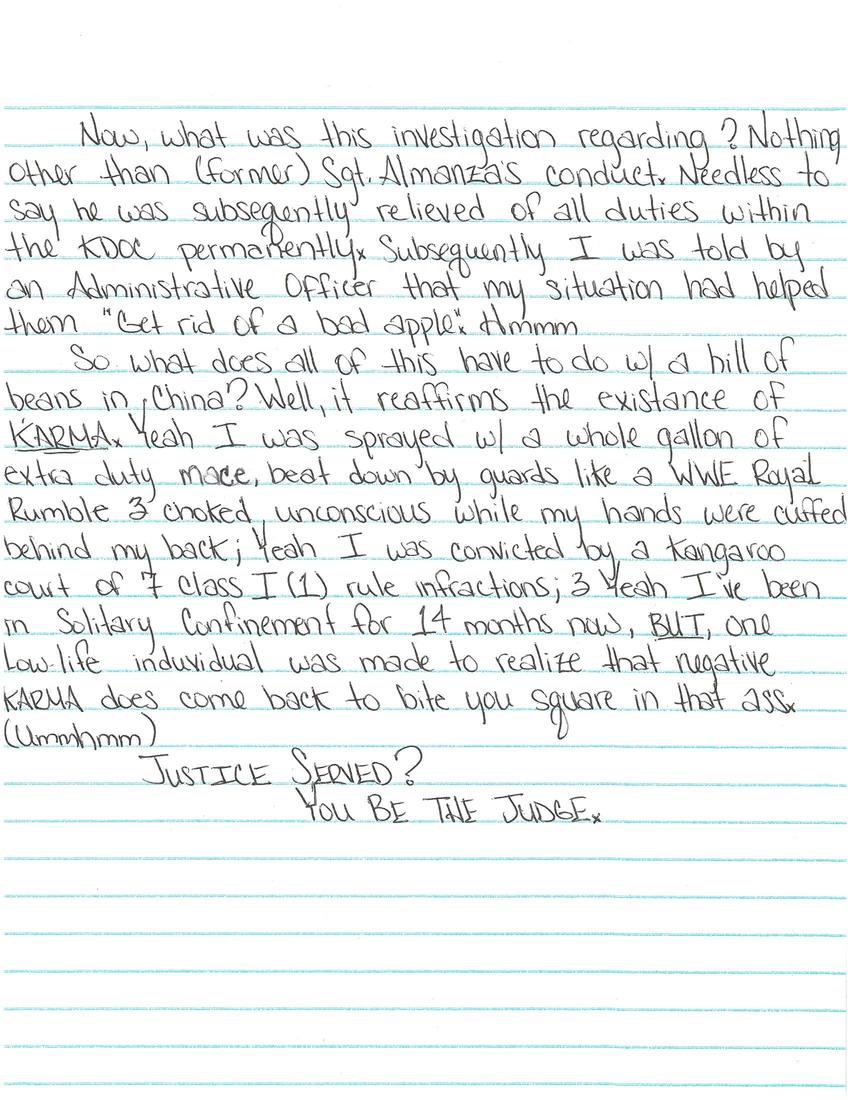 PAGE 1 OF 2
This is a summary of the disciplinary hearing and is not intended to be a transcript.

Inmate Bell was sworn in, the DR was read into the record, there was a witness slip submitted with Washington 93961 and Love 97757. Both submitted written statements in lieu of appearance in Segregation. Inmate Bell requested a continuance at this time, Attachment A. This was denied by the Disciplinary Administrator as due to
A) inmate Bell's Attorney will not be part of the Administrative hearing nor would his legal advice be allowed, and
B) Mental Health had not seen any reason to place inmate Bell on any status that would prevent the hearing from commencing and being finished, Attachment B; and
C) Refer to A in reference to this being an Administrative hearing and the Disciplinary Administrator is not schooled in law and the legal cases that inmate Bell stated he needed.
After inmate Bell was told the hearing would continue without delay, he immediately pulled out a Declaration of Duress, Attachment C.
When questioned by the Disciplinary Administrator if he had anything further, he also produced a hand written document, herein listed as Attachment D, for his statement of the facts. This was entered into the record as his statement as to the incident. When he was asked if he had anything else, inmate Bell remained mute. He was given another chance to speak, he chose not to and he was informed the hearing would be held with a Staff Assistant assigned to him and held without his person being in the room. He was escorted out of the hearing room at this time.
About 5 minutes, the staff member who had escorted inmate Bell out came back in and requested the third document and he was informed that the document was part of the record and would not be given back to inmate Bell, as it was the original and needed to be maintained, undisturbed or altered from the condition it had been received.

Inmate Love's (97757) statement says he and Bell were coming from the showers when Bell was called to CS1 Widener. As they talked, another staff member ran up and grabbed Bell as he was fighting them. While Bell was on the ground, COII Almanza was kicking Bell. Then as Bell was being taken downstairs, they were still hitting Bell.

Inmate Washington's (93961) statement says that Bell went to talk to CS1 Widener and after Widener told him to cuff up, at which point Bell said no, he wanted to speak to the Captain. Widener told him no the Captain wasn't coming up and he needed to cuff up. As CS1 Widener was attempting to cuff inmate Bell up, Bell hit Widener and he COII Almanza and a few other staff members took Bell down, sprayed him with OC and tried to restrain him.

ALTHOUGH AT THIS POINT, INMATE BELL HAD WILLINGLY GIVEN A WRITTEN STATEMENT FOR HIS DEFENSE, AND ALL WITNESSES HAD BEEN CALLED AND STATEMENTS DOCUMENTED, STAFF ASSISTANCE WAS STILL ASSIGNED TO ALLEVIATE ANY POSSIBLE MISINTERPRETATION OF THE PROCEEDINGS AND DOCUMENTATION.

CONTINUED FROM PREVIOUS PAGE.
PAGE 2 OF 2

CCII A. Schrader was contacted and assigned as staff assistance. The hearing had been put in recess in 12/14/2010 when inmate Bell refused to state anything else. The hearing was reconvened at 12:55 PM on 12/16/2010 in CCII Schrader's office.
Also presented into the record was the documentation listed as Attachment B, in which the Mental Health Department had seen nor heard any reason to believe that inmate Bell was not mentally capable of attending and participating in the hearing of his own accord, that he was able to comprehend the situation and did understand the severity of it, as documented by his introduction of the statements presented, and that the Mental Health had no reason to see him as unable to continue on his own, other than he did not want to.
Ms. Schrader had no questions after reading the documents presented.
Nothing further.