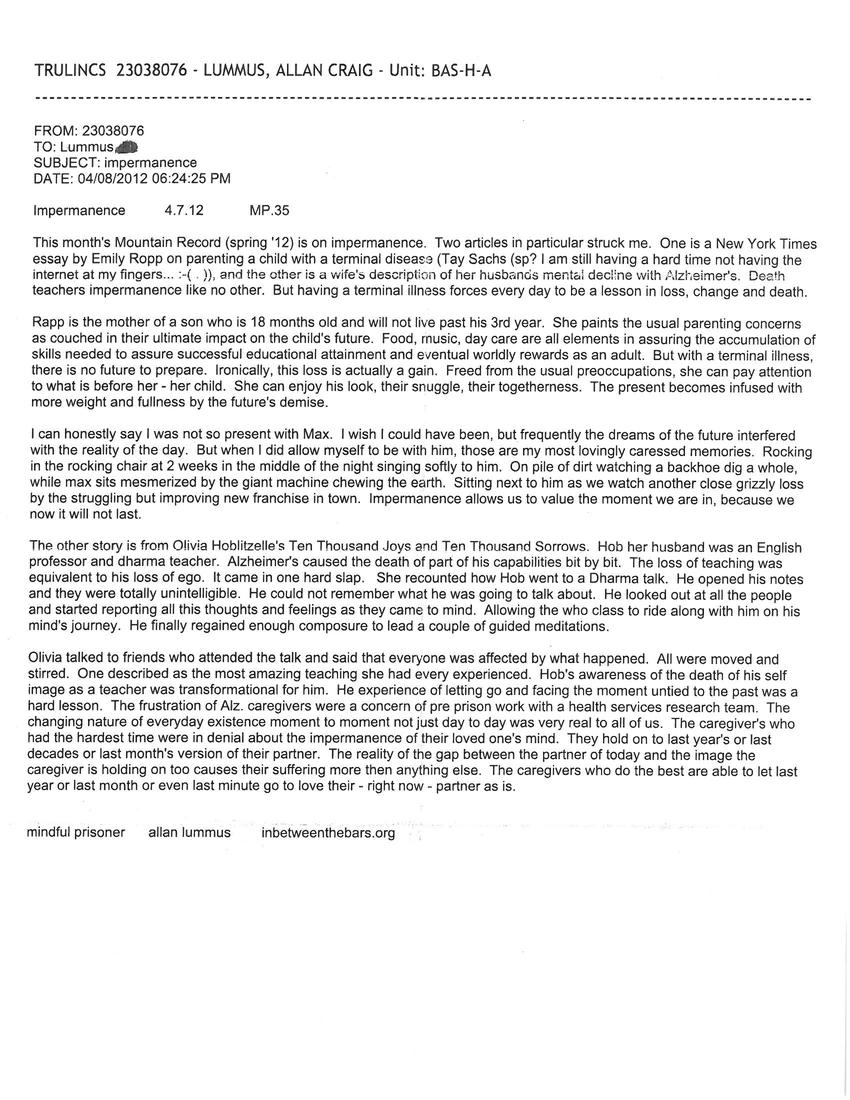 The month's Mountain Record 9spring '12) is on impermanence. Two articles in paticular struk me. One is a New york Times essay by Emily Ropp on parenting a child wuth a terminal disease (tay Sachs 9sp? I am still having a hard time not having the internet a tmy fingers...:-( . )), and the other is a wife's dexcription of her husbands mental decline with Alzheimers's. Death teachers impermanence like no other. But having a terminal illness forces every day to be a lesson in loss, change and death.

Rapp is the mother of a son who is 18 months old and will not live past his 3rd year. She paints the usual parenting concerns as couched in their ultimate impact on the child's future. food, music, day care are all elements in assuring the accumulation of skills needed to assure successful educational attainment and eventual worldly rewards as an adult. But with a terminal illness, there is no future to prepare. Ironically, this loss is actually a gain. Freed drom the usual preoccupations, she can pay attention to what is before her - her child. She can enjoy hos look, their snuggle, their togetherness. The present becomes infused with more weight and fullness by the future's demise.

I can honestly say I was not so present with Max. I wish I could have been, but frequently the dreams of the future interfered with the reality of the day. But when I did allow myself to be with him, those are my most lovingly caressed memories. Rocking in the rocking chair at 2 weeks in the middle of the night singing softly to him. On pile of dirt watching a backhoe dig a hole, while Max sits mesmerized by the giant machine chewing the earth. Sitting next to him as we watch another close grizzly loss by the struggling but improving new franchise in town. Impermanence allows us to value the moment we are in, because we now it will not last.

The other story is from Olivia Hoblitzelle's Ten Thousand Joys and Ten Thousand Sorrows. Hob her husband was an english professor and sharma teacher. Alzheimer's caused the death of part of his capabilities bit by bit. The loss of teaching was equivalent to his los sof ego. It came in one hard slap. She recounted how hob went to a Dharma talk. he opened hisnotes and they were totally unintelligible. He could not remember what he was going to talk about. He looked out at all the people anbd started reporting all this thoughts and feelings as they came to mind. Allowing the who class to ride along with him on his mind's journey. He finally regained enough composure to lead a couple of guided meditations.

olivia talked to friends who attended the talk and said that eveyone was affected by what happened. all were moved and stirred. One described as the most amazing teaching she had every experienced. hob's awareness of the death of his self image as a teacher was transformational for him. He experience of letting go and facing the moment untied to the past was a hard lesson. The frustration of Alz caregivers were a concern of pre prison work with a health services research team. The changing nature of everyday existence moment to moment not just day to day was very real to all of us. The caregiver's who had the hardest time were in denial about the impermanence of their loved one's mind. They hold on to last year's or last decades or last month's version of their partner. The reality of the gap between the partner of today and the image the caregiver is holding on too causes their suffering more than anything else. The caregiver's who do the best are able to let last year or last month or even minute go to love their - right now - partner as is.