Compassionate Release in Massachusetts: "Its Time Has Come" 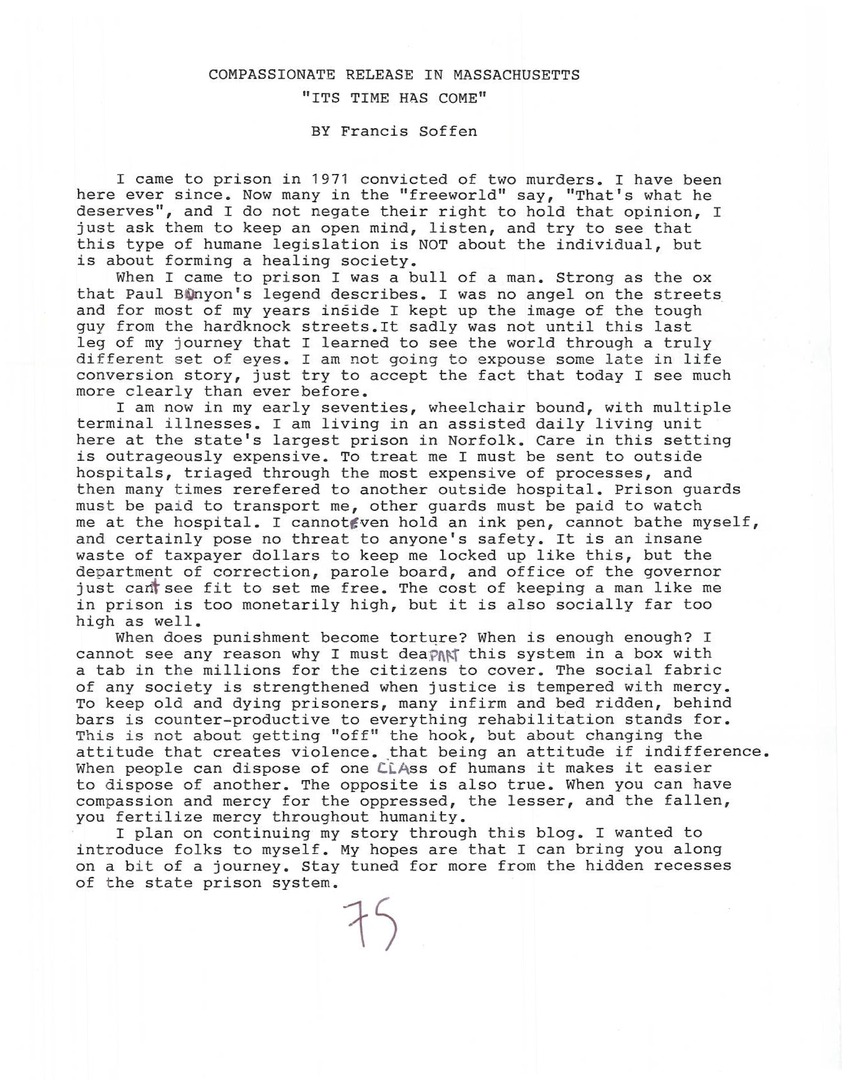 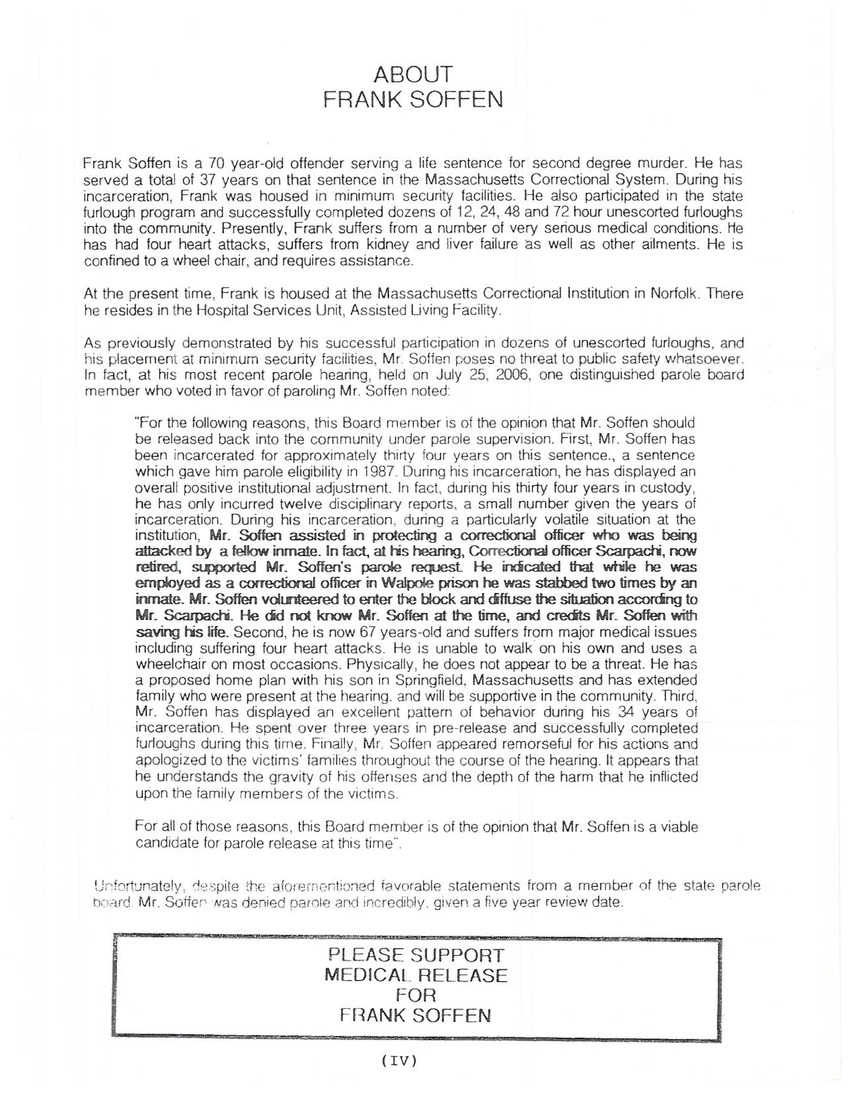 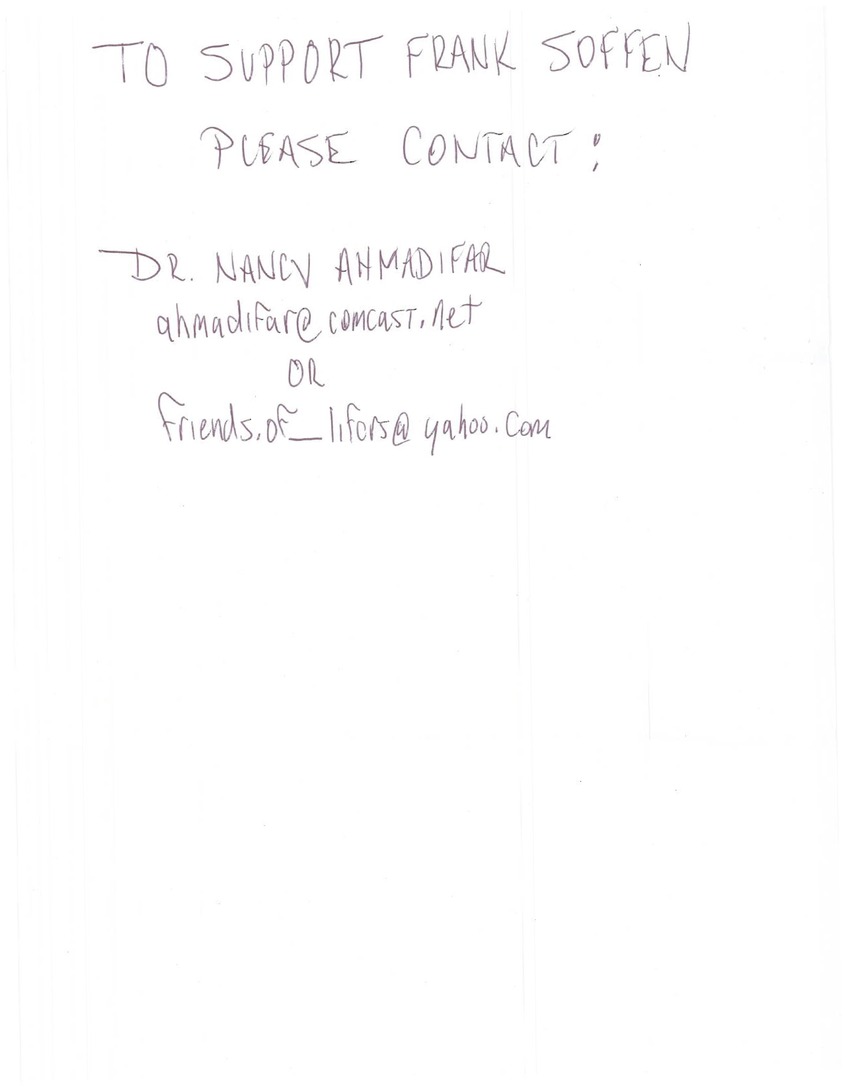 COMPASSIONATE RELEASE IN MASSACHUSETTS
"ITS TIME HAS COME"

I came to prison in 1971 convicted of two murders. I have been here ever since. Now many in the "freeworld" say, "That's what he deserves", and I do not negate their right to hold that opinion, I just ask them to keep an open mind, listen, and try to see that this type of humane legislation is NOT about the individual, but about forming a healing society.

When I came to prison I was a bull of a man. Strong as the ox that Paul Bunyon's legend describes. I was no angel on the sterets and for most of my years inside I kept up the image of the tough guy from the hardknock streets. It sadly was not until this last leg of my journey that I learned to see the world through a truly different set of eyes. I am not going to expouse some late in life conversion story, just try to accept the fact that today I see much more clearly than ever before.

I am now in my early seventies, wheelchair bound, with multiple terminal illnesses. I am living in an assisted daily living unit here at the state's largest prison in Norfolk. Care in this setting is outrageously expensive. To treat me I must be sent to outside hospitals, triaged through the most expensive of processes, and then many times rerefered to another outside hospital. Prison guards must be paid to transport me, other guards must be paid to watch me at the hospital. I cannot even hold an ink pen, cannot bathe myself, and certainly pose no threat to anyone's safety. It is an insane waste of taxpayer dollars to keep me locked up like this, but the department of correction, parole board, and office of the governor just can't see fit to set me free. The cost of keeping a man like me in prison is too monetarily high, but it is also socially far too high as well.

When does punishment become torture? When is enough enough? I cannot see any reason why I must deapart this system in a box with a tab in the millions for the citizens to cover. The social fabric of any society is strenghtened when justice is tempered with mercy. To keep old and dying prisoners, many infirm and bed ridden, behind bars is counter-productive to everything rehabilitation stands for. This is not about getting "off" the hook, but about changing the attitude that creates violence. that being an attitude if indifference. When people can dispose of one class of humans it makes it easier to dispose of another. The opposite is also true. When you can have compassion and mercy for the oppressed, the lesser, and the fallen, you fertilize mercy throughout humanity.

I plan on continuing my story through this blog. I wanted to introduce folks to myself. My hopes are that I can bring you along on a bit of a journey. Stay tuned for more from the hidden recesses of the state prison system.

Frank Soffen is a 70 year-old offender serving al ife sentence for second degree murder. He has served a total of 37 years on that sentence in the Massachusetts Correctional System. During his incarceration, Frank was housed in minimum security facilities. He also participated in the state furlough program and successfully completed dozens of 12, 24, 48, and 72 hour unescorted furloughs into the community. Presently, Frank suffers from a number of very serious medical conditions. He has had four heart attacks, suffers from kidney and liver failure as well as other ailments. He is confined to a wheel chair, and requires assistance.

At the present time, Frank is housed at the Massachusetts Correctional Institution in Norflk. There he resides in the Hospital Services Unit, Assisted Living Facility.

As previously demonstrated by his successful participation in dozens of unescorted furloughs, and his placement at minimum security facilities, Mr. Soffen poses no threat to public safety whatsoever. In fact, at this most recent parole hearing, held on July 25, 2006, one distringuished parole board member who voted in favor of paroling Mr. Soffen noted:

"For the following reasons, this Board member is of the opinion that Mr. Soffen should be released back into the community under parole supervision. First, Mr. Soffen has been incarcerated for approximately thirty four years on this sentence, a sentence which gave him parole eligibility in 1987. During his incarceration, he has displayed an overall positive institutional adjustment. In fact, during his thirty four years in custody, he has only incurred twelve disciplinary reports, a small number given the years of incarceration. During his incarceration, during a particularly volatile situation at the institution, [in bold] Mr. Soffen assisted in protecting a correctional officer who was being attacked by a fellow inmate. In fact, at his hearing, Corectional officer Scarpachi, now retired, supported Mr. Soffen's parole request. He indicated that while he was employed as a correctional officer in Walpole prison he was stabbed two times by an inmate. Mr. Soffen volunteered to enter the block and diffuse the situation according to Mr. Scarpachi. He did not know Mr. Soffen at the time, and credits Mr. Soffen with saving his life. [end of bold section] Second, he is now 67 years-old and suffers from major medical issues including suffering four heart attacks. He is unable to walk on his own and uses a wheelchair on most occasions. Physically, he does not appear to be a threat. He has a proposed home plan with his son in Springfield, Massachusetts and has extended family who were present at the hearing. and will be supportive in the community. Third, Mr. Soffen has displayed an excellent pattern of behavior during his 34 years of incarceration. He spent over three years in pre-release and successfully completed furloughs during this time. Finally, Mr. Soffen appears remorseful for his actions and apologized to the victims' families throughout the course of the hearing. It appears that he understands the gravity of his offenses and the depth of the harm that he inflicted upon the family members of the victims.

For all of those reasons, this Board member is of the opinion that Mr. Soffen is a viable candidate for parole release at this time."

Unfortunately, despite the aforementioned favorable statements from a member of the state parole board, Mr. Soffen was denied parole and incredibly, given a five year review date.

So Mr.Soffen apoligized at the parole hearing...because he was trying to look good in front of the Parole Board!!

If he truly meant it, he would have done that years ago by sending letters or writing blogs about how sorry he was!

No!! Instead all he does is talk about what a great person he has become and how sick and disabled he is.

If he has such great faith in God, then he should know he is exactly where he should be.
This is so sad to see; society can't forgive! This is what is wrong with the world today!Some one is playing God, and should not be.
Mr.Soffen has done his time. It is time for him to go home. There is an un-told story here. It has twists and turns that you could never imagine.
It is time for a forgiveness to occur. Let him go home and live out his remainder of days with his son. All of you who sit in judgement say he took the live's of someone else's sons, go back in the history and read the story of what took place. You will discover that the men that died were also like Mr. Soffen, though they did not deserve death, they were his partners, and did the same things that he did.
This man went to prison alone; and there were others involved, there is so much betrayal and bargaining that was done with the D.A.'s office and other members of the Soffen Gang, Mr.Soffen was the one that was hung for it all.
I believe that because one of the families of his victims is tied into the court house, they have held their weight in keeping this man in prison.
His parole date has been due for many years now, he is no longer a threat to society, he is medically incapable of hurting anyone, eleven murderers were just released I pray that Mr. Soffen was one of them.
Janyce
Well, he wasn't, Thank God. I believe that you probably really do believe there must be someone on the inside of the court system. How sad for you,you are mistaken. You just cannot understand why they would actually want to keep this murderer behind bars for the remainder of his life. Oh well, get over it.
Frank Soffen's behavior in prison is disgraceful, his crimes atrocious, and his rehabilitation nonexistent. Right up to his recent demise he was un-remorseful and self absorbed. Good riddance to him.