#2 Rejection of the Social Norm 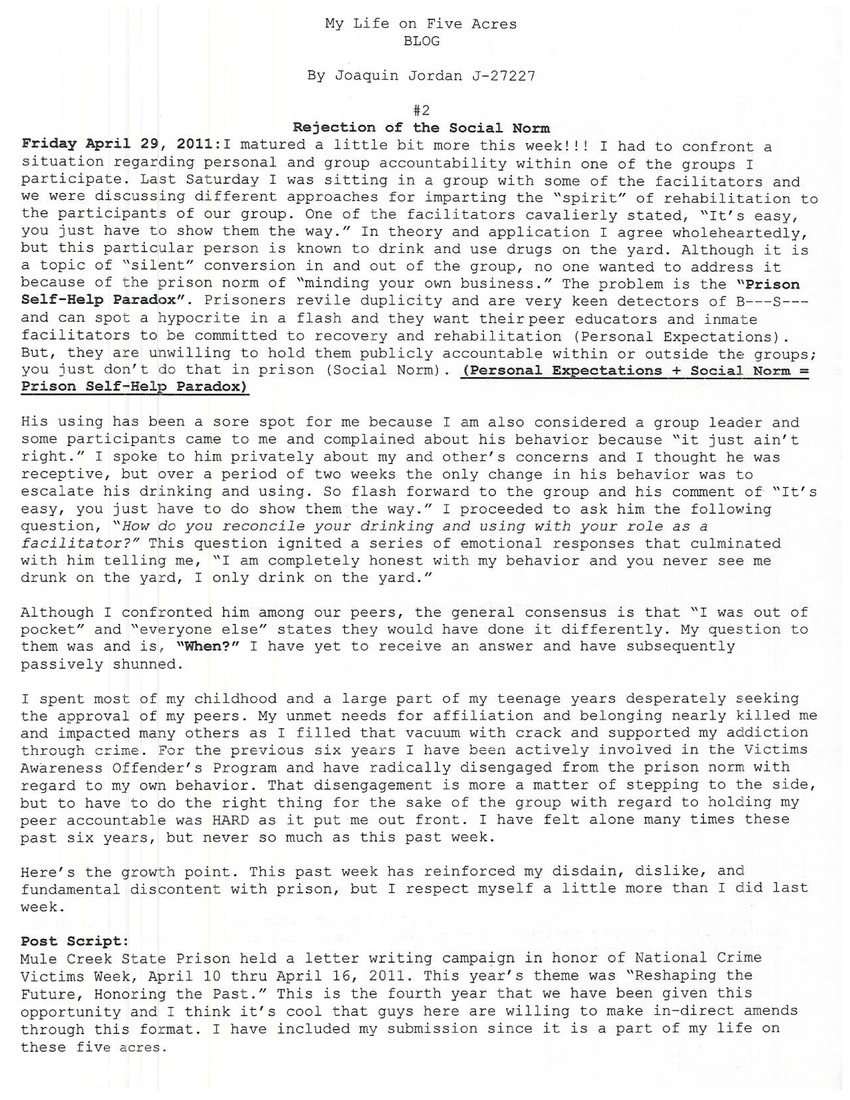 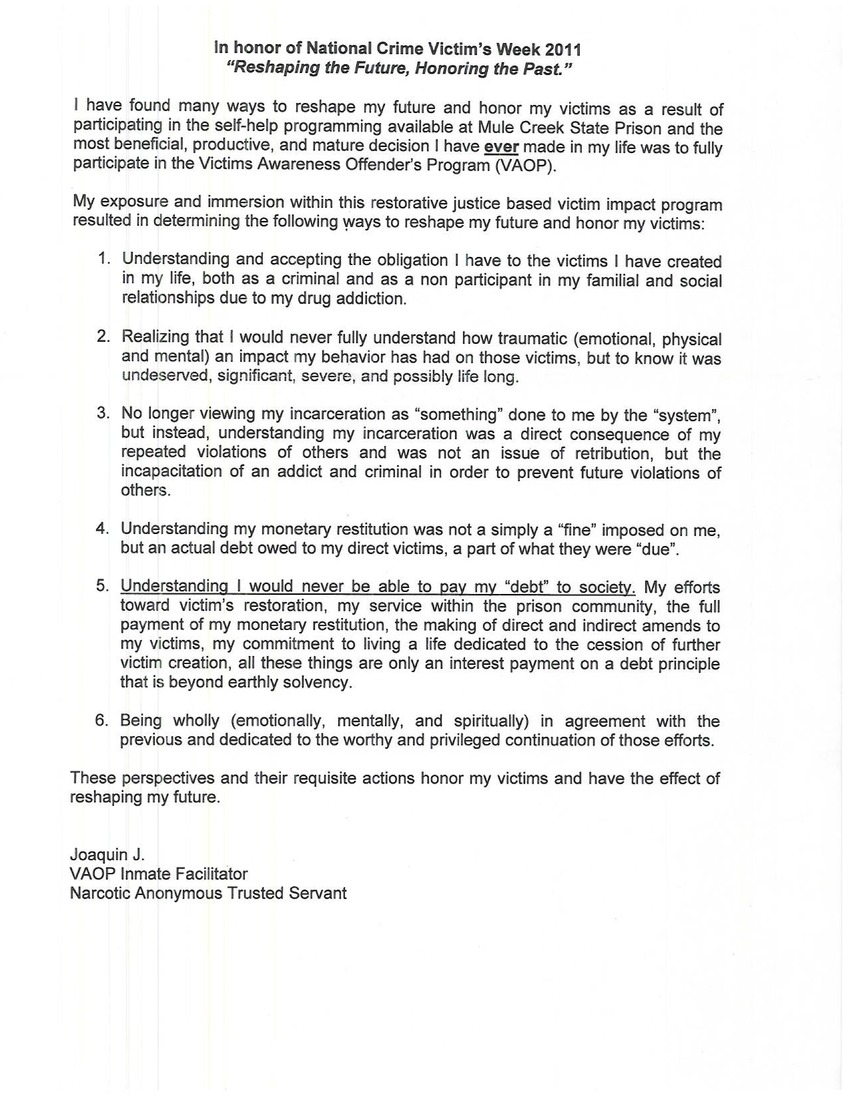 My Life on Five Acres
By Joaquin Jordan J-27227

I matured a little bit more this week! I had to confront a situation regarding personal and group accountability within one of the groups I participate. Last Saturday I was sitting in a group with some of the facilitators and we were discussing different approaching for imparting the spirit of rehabilitation to the participants of our group. One of the facilitators cavalierly stated, "It's easy, you just have to show them the way."

In theory and application, I agree wholeheartedly. But this particular person is known to drink and use drugs on the yard. Although it is a topic of silent conversation in and out of the group, no one wanted to address it because of the person norm of "minding your own business." The problem is the Prison Self-Help Paradox. Prisoners revile duplicity and are very keen detractors of BS and can spot a hypocrite in a flash, and they want their peer educators and inmate facilitators to be committed to recovery and rehabilitation (personal expectations). But they are unwilling to hold them publicly accountable within or outside the groups; you just don't do that in prison (social norm).

His using has been a sore spot for me because I am also considered a group leader, and some participants came to me and complained about his behavior because, "It just ain't right." I spoke to hi privately about my and other's concerns, and I thought he was receptive. But over a period of two weeks, the only changes in his behavior was to escalate his drinking and using. So flash-forward to the group and his comment of, "It's easy. You just have to show them the way." I proceeded to ask him, "How do you reconcile your drinking and using with your role as a facilitator?" This question ignited a series of emotional responses that culminated with him telling me, "I am completely honest with my behavior and you never see me drunk on the yard, I only drink on the yard."

Although I confronted him among our peers, the general consensus is that "I was out of pocket" and "everyone else" states they would have done it differently. My question to them remains, "When?" I have yet to receive an answer and have subsequently passively shunned.

I spent most of my childhood and a large part of my teenager years desperately seeking the approval of my peers. My unmet needs for affiliation and belonging nearly killed me and impacted many others as I filled that vacuum with crack and supported my addiction through crime. For the previous six years, I have been actively involved in the victims awareness offenders program and have radically disengaged from the prison norm with regard to my own behavior. That disengagement is more a matter of stepping to the side, but to doing the right thing for the sake of the group to holding my peer accountable was HARD since it put me out front. I have felt alone many times these past six years, but never so much as this past week.

Here's the growth point. This past week has reinforced my disdain, dislike, and fundamental discontent with prison. But I respect myself a little more than I did last week.

Post Script:
Mule Creek State Prison held a letter writing campaign in honor of National Crime Victims Week, April 10 through April 16, 2011. This year's theme was "Reshaping the Future, Honoring the Past." This is the fourth year that we have done this opportunity, and I think it's cool that guys here are willing to make indirect amends through this format. I have included my submission since it is a part of my life on these five acres.

In honor of National Crime Victims' Week 2011
"Reshaping the Future, Honoring the Past"

I have found many ways to reshape my future and honor my victims as a result of participating in the self-help programming available at Mule Creek State Prison and the most beneficial, productive, and mature decision I have ever made in my life was to fully participate in the Victims Awareness Offender's Program (VAOP).

My exposure and immersion within this restorative justice based victim impact program resulted in determining the following ways to reshape my future and honor my victims.

1. Understanding and accepting the obligation I have to the victims I have created in my life, both as a criminal and as a non-participant in my familial and social relationships due to my drug addiction.

2. Realizing that I would never fully understand how traumatic (emotional, physical, and mental) an impact my behavior has had on those victims, but to know it was undeserved, significant, severe, and possibly lifelong.

4. Understanding my monetary restitution was not a simply a "fine" imposed on me, but an actual debt owed to my direct victims, a part of what they were due.

5. Understanding I would never be able to pay my debt to society. My efforts toward victim's restoration, my service within the prison community, the full payment of my monetary restitution, the making of direct and indirect amends to my victims, my commitment to living a life dedicated to the cession of further victim creation, all these things are only an interest payment on a debt principle that is beyond earthly solvency.

6. Being wholly (emotionally, mentally, and spiritually) in agreement with the previous and dedicated to the worthy and privileged continuation of those efforts.

These perspectives and their requisite actions honor my victims and have the effect of reshaping my future.