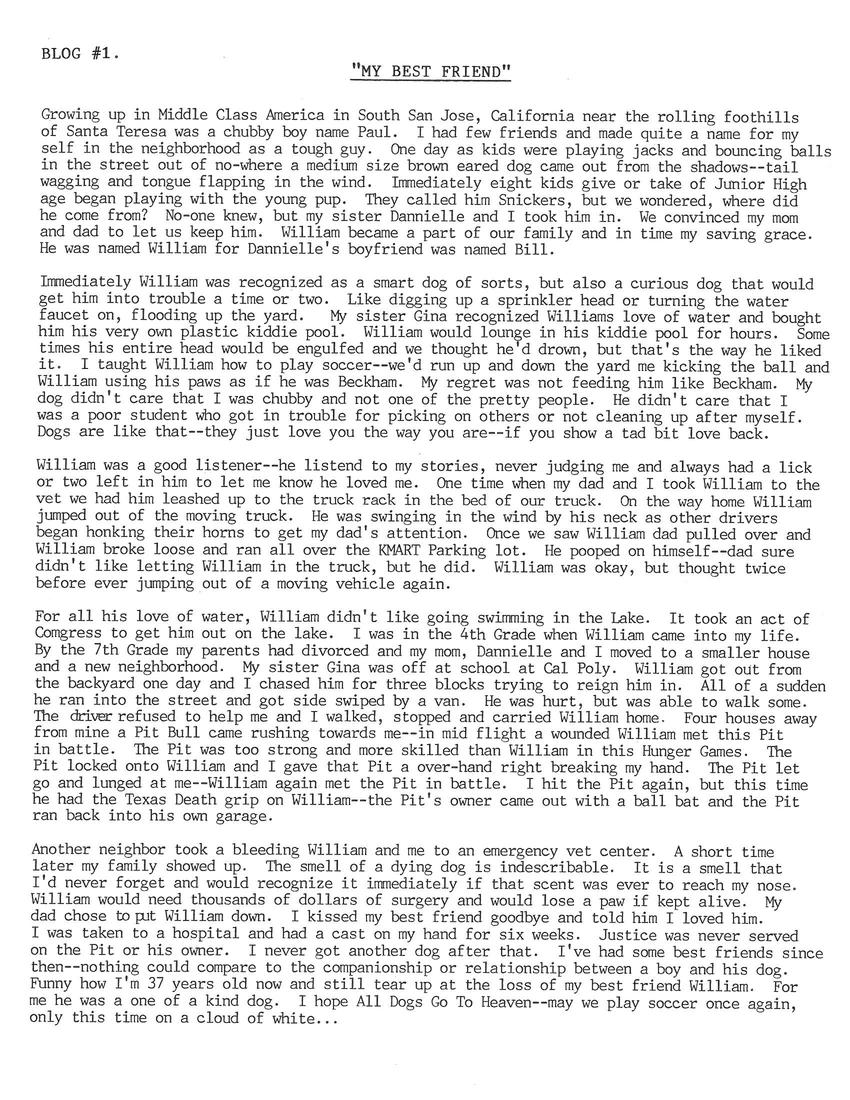 Growing up in middle class America in south San Jose, California near the rolling foothills of Santa Teresa was a chubby boy named Paul. I had few friends and made quite a name for myself in the neighborhood as a tough guy.

One day, as kids were playing jacks and bouncing balls in the street, out of nowhere, comes a medium-sized, brown-eared dog from the shadows. Tail wagging and tongue flapping in the wind. They called him Snickers. We wondered where he came from, but no one knew. My sister Danielle and I took him in. We convinced my mom and dad to let us keep him. William became a part of our family and, in time, my saving grace. He was named William for Danielle's boyfriend was named Bill.

Immediately, William was recognized as a sort of smart and curious dog that would get into trouble. Like digging up a sprinkler head or turning the water faucet on, flooding up the yard. My sister Gina recognized William's love for water and bought him his own plastic kiddie pool. William lounged in the kiddie pool for hours. Sometimes his entire head would be submerged and we thought he drown, but that's the way he liked it.

I taught William how to play soccer. We'd run up and down the yard, me kicking the ball and William using his paws as if he was Beckham. My regret was not feeding him like Beckham.

My dog didn't care that I was chubby and not one of the pretty people. He didn't care that I was a poor student who got into trouble for picking on others or not cleaning up after myself. Dogs are like that—they just love you the way you are if you show a tad bit of love back. William was a good listener. He listened to my stories, never judging me and always had a lick or two left in him to let me know he loved me.

One time, when my dad and I took William to the vet, we had him leashed up to the truck rack in the bed of our truck. On the way home, William jumped out of the moving truck. He was swinging in the wind by his neck as other drivers began honking their horns to get my dad's attention. Once we saw William, Dad pulled over and William broke loose, running all over the Kmart parking lot. He pooped on himself. Dad sure didn't like letting William in the truck, but he did. William was okay but thought twice about jumping out a moving vehicle ever again.

For all of his love for water, William didn't like swimming in the lake. It took an act of Congress to get him out on the lake.

I was in the fourth grade when William came into my life. By the seventh grade, my parents divorced and my mom, Danielle, and I moved to a smaller house and a new neighborhood. My sister was off at school at Cal Poly.

William got out from the backyard one day. I chased him for three blocks trying to reign him in. All of sudden, he ran into the street and got sideswiped by a van. He was hurt but was able to walk some. The driver refused to help me. So I walked, stopped, and carried William home.

Four houses away from mine, a pitbull came rushing towards me. In mid-flight, a wounded William met this pit in battle. The pit was too strong and more skilled than William in this Hunger Game. The pit locked onto William, and I gave that pit an overhead right that broke my hand. The pit let go and lunged at me. William met the pit again in battle. I hit the pit again, but this time, he had the Texas Death Grip on Wiliam. The pit's owner came out with a baseball bat. The pit ran back into his own garage.

Another neighbor took a bleeding William and me to an emergency vet center. A short time later, my family showed up. The smell of dying dog is indescribable. It is a smell that I'd never forget and would recognize immediately if that scent were ever to reach my nose. William would need thousands of dollars of surgery and would lose a paw if kept alive. My dad chose to put William down. I kissed my best friend goodbye and told him I loved him.

I was taken to a hospital and had a cast on my hand for six weeks.

Justice was never served to the pit or his owner.

I never got another dog after that. I've had some best friends since then—nothing could compare to the companionship between a boy and his dog. Funny how I'm 37 years old now and still tear up at the loss of my best friend William. For me, he was a one of a kind dog. I hope all dogs go to heaven. May we play soccer once again, only this time on a cloud of white...