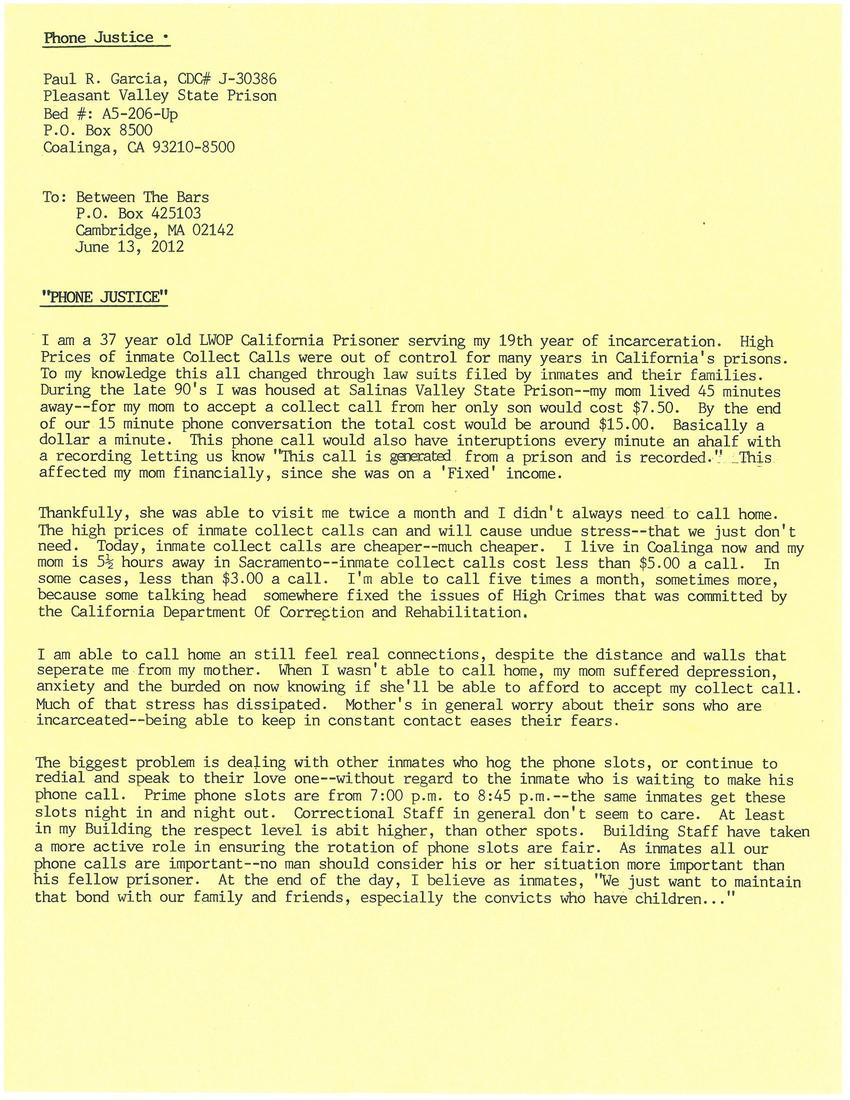 I am a 37 year old LWOP California Prisoner serving my 19th year of incarceration. High prices of inmate Collect Calls were out of control for many years in California's prisons. To my knowledge this all changed through law suits filed by inmates and their families. During the late 90's I was housed at Salinas Valley State Prison--my mom lived 45 minutes away--for my mom to accept a collect call from her only son would cost $7.50. By the end of our 15 minute phone conversation the total cost would be around $15.00. Basically a dollar a minute. This phone call would also have interruptions every minute and a half with a recording letting us know "This call is generated from a prison and is recorded." This affected my mom financially, since she was on a 'Fixed' income.

Thankfully, she was able to visit me twice a month and I didn't always need to call home. The high prices of inmate collect calls can and will cause undue stress--that we just don't need. Today, inmate collect calls are cheaper--much cheaper. I live in Coalinga now and my mom is 5 1/2 hours away in Sacramento--inmate collect calls cost less than $5.00 a call. In some cases, less than $3.00 a call. I'm able to call five times a month, sometimes more, because some talking head somewhere fixed the issues of High Crimes that was committed by the California Department Of Correction and Rehabilitation.

I am able to call home and still feel real connections, despite the distance and walls that separate me from my mother. When I wasn't able to call home, my mom suffered depression, anxiety and the burden of not knowing if she'll be able to afford to accept my collect call. Much of that stress has dissipated. Mothers in general worry about their sons who are incarcerated--being able to keep in constant contact eases their fears.

The biggest problem is dealing with other inmates who hog the phone slots, or continue to redial and speak to their loved one--without regard to the inmate who is waiting to make his phone call. Prime phone slots are from 7:00 p.m. to 8:45 p.m.--the same inmates get these slots night in and night out. Correctional Staff in general don't seem to care. At least in my building the respect level is a bit higher than other spots. Building Staff have taken a more active role in ensuring the rotation of phones slots are fair. As inmates all our phone calls are important--no man should consider his or her situation more important than his fellow prisoner. At the end of the day, I believe as inmates, "We just want to maintain that bond with our family and friends, especially the convicts who have children..."