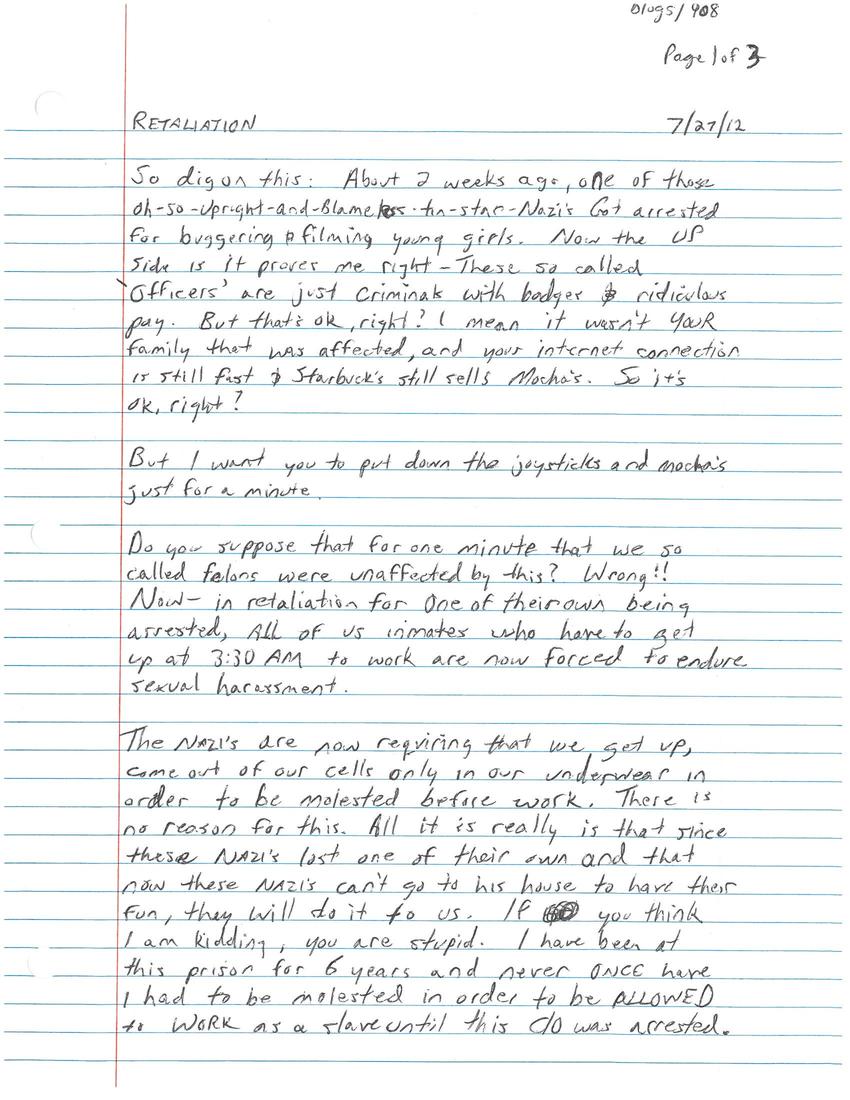 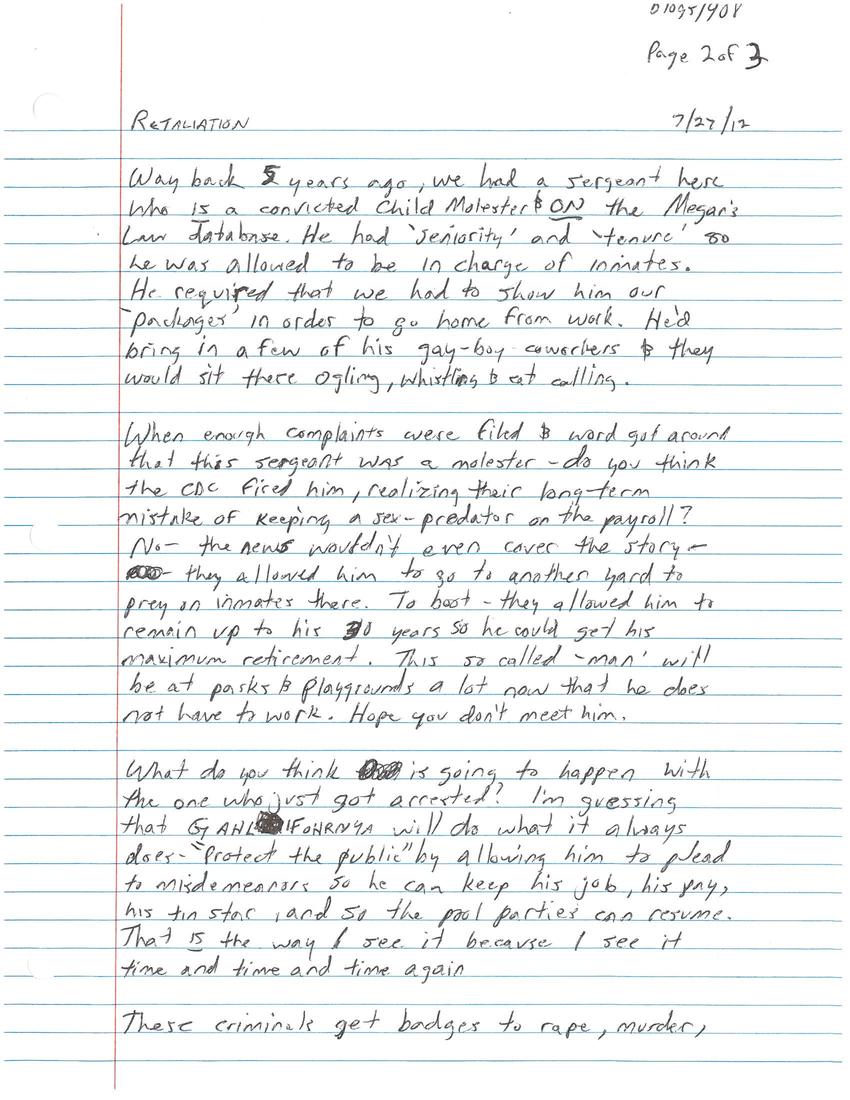 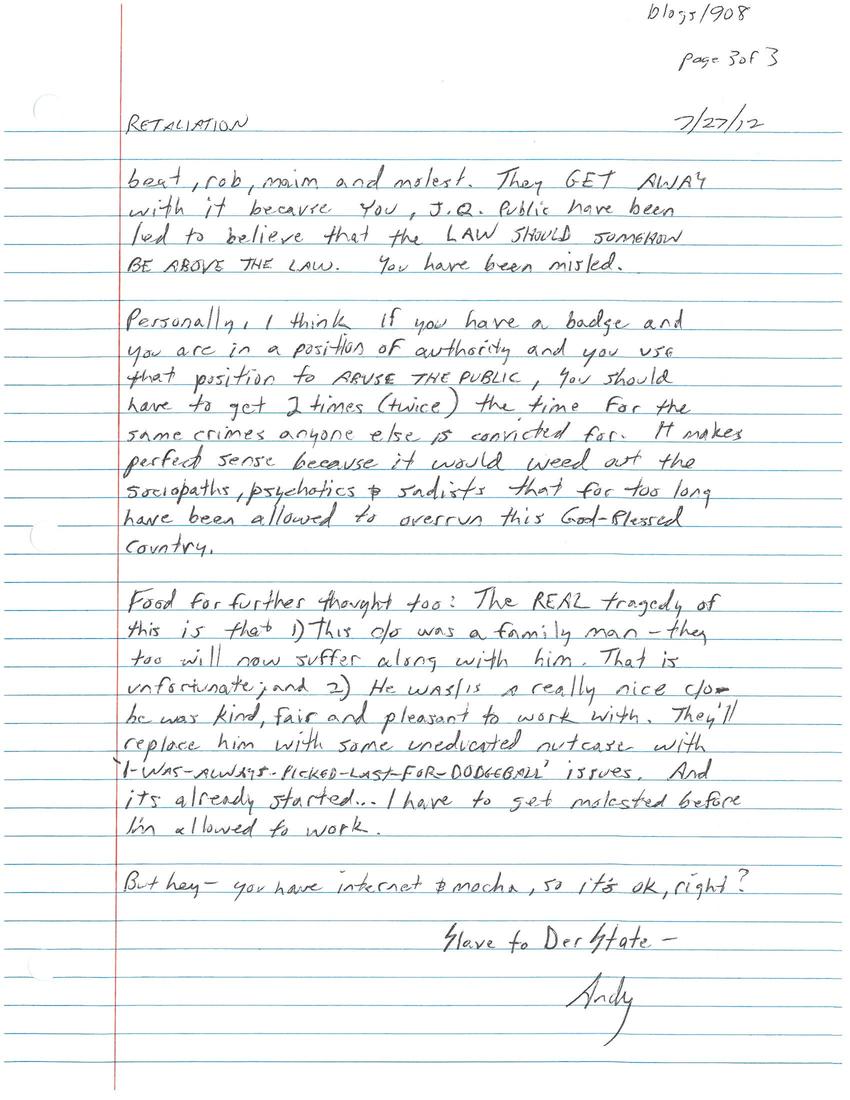 So dig on this: About 2 weeks ago, one of those oh-so-upright-and-blameless-tin-star-Nazis got arrested for buggering & filming young girls. Now the UP side is it proves me right - these so called 'Officers' are just criminals with badges and ridiculous pay. But that's ok, right? I mean it wasn't your family that was affected, and your internet connection is still fast and Starbucks still sells mochas. So it's ok, right?

But I want you to put down the joysticks and mochas just for a minute.

Do you suppose that for one minute that we so called felons were unaffected by this? Wrong!! Now - in retaliation for one of their own being arrested, all of us inmates who have to get up at 3.30am to work are now forced to endure sexual harassment.

The Nazis are now requiring that we get up, come out of our cells only in our underwear in order to be molested before work. There is no reason for this. All it is really is that since these NAZIS lost one of their own and that now these Nazis can't go to his house to have their fun, they will do it to us. If you think I am kidding, you are stupid. I have been at this prison for 6 years and never once have I had to be molested in order to be ALLOWED to WORK as a slave until this C/O was arrested.

Way back 5 years ago, we had a sergeant here who IS a convicted child molester and ON the Megan's Law database. He had 'seniority' and 'tenure' so he was allowed to be in charge of inmates. He required that we had to show him our 'packages' in order to go home from work. He'd bring in a few of his gay-boy coworkers and they would sit there ogling, whistling and cat calling.

When enough complaints were filed & word got around that this sergeant was a molester - do you think the CDC fired him, realizing their long-term mistake of keeping a sex-predator on the payroll? No - the news wouldn't even cover the story - they allowed him to go to another yard to prey on inmates there. To boot - they allowed him to remain up to his 30 years so he could get his maximum retirement. This so called 'man' will be at parks & playgrounds a lot now that he does not have to work. Hope you don't meet him.

What do you think is going to happen with the one who just got arrested? I'm guessing that Gahlifornya will do what it always does - "protect the public" by allowing him to plead to misdemeanors so he can keep his job, his pay, his tin star, and so the pool parties can resume. That IS the way I see it because I see it time and time and time again.

These criminals get badges to rape, murder, beat, rob, maim and molest. They get away with it because you, J.Q. Public, have been led to believe that the law should somehow be above the law. You have been misled.

Personally, I think if you have a badge and you are in a position of authority and you use that position to abuse the public, you should have to get 2 times (twice) the time for the same crimes anyone else is convicted for. It makes perfect sense because it would weed out the sociopaths, psychotics & sadists that for too long have been allowed to overrun this God-blessed country.

Food for further thought too: The REAL tragedy of this is that 1) this C/O was a family man - they too will now suffer along with him. That is unfortunate; and 2) He was/is a really nice C/O - he was kind, fair and pleasant to work with. They'll replace him with some uneducated nutcase with 'I-was-always-picked-last-for-dodgeball' issues. And it's already started... I have to get molested before I'm allowed to work.

But hey - you have internet & mocha, so it's OK,right?