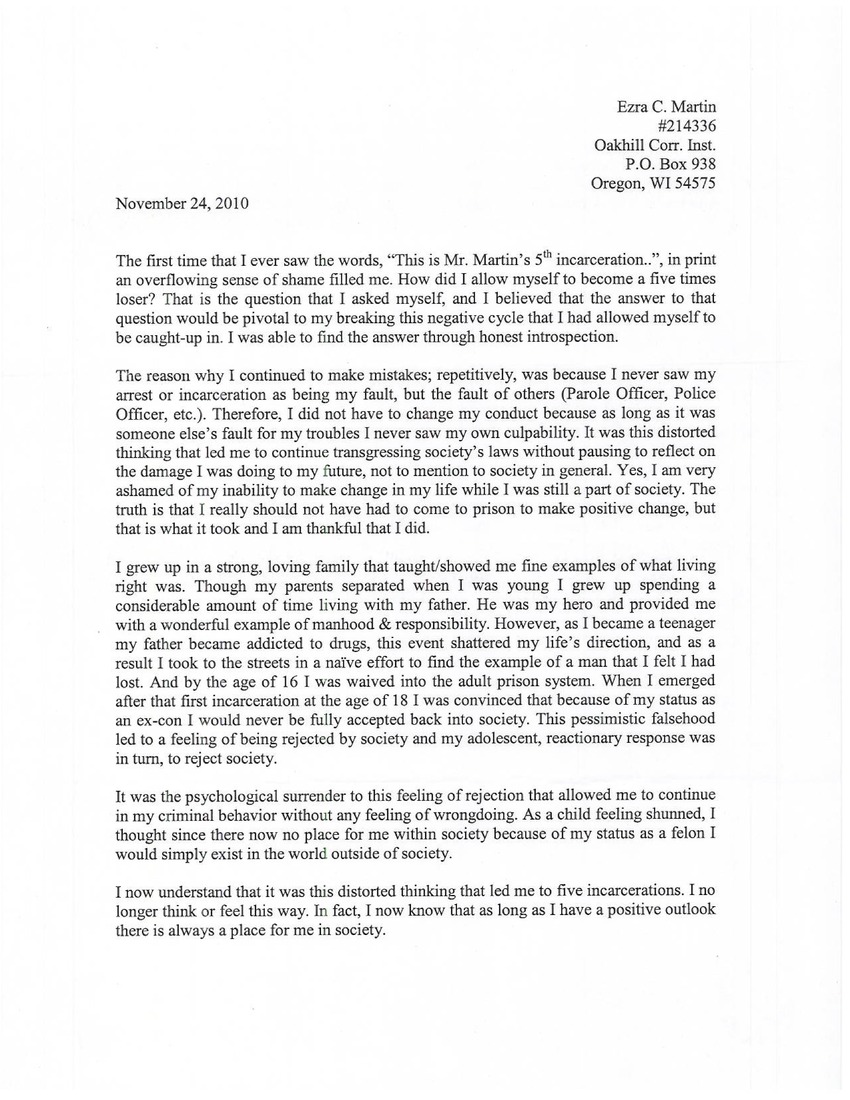 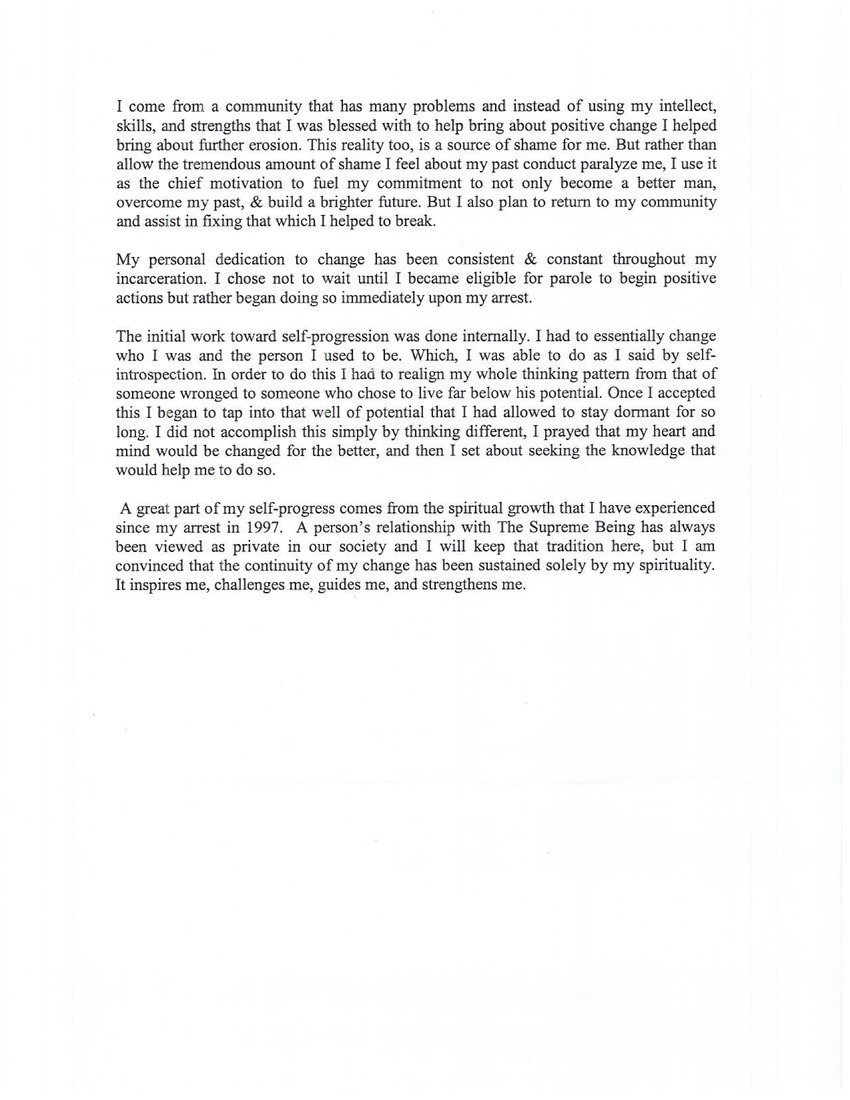 The first time that I ever saw the words, "This is Mr. Martin's 5th incarceration...", in print an overflowing sense of shame filled me. How did I allow myself to become a five times loser? That is the question that I asked myself, and I believed that the answer to that question would be pivotal to my breaking this negative cycle that I had allowed myself to be caught-up in. I was able to find the answer through honest introspection.

The reason why I continued to make mistakes; repetitively, was because I never saw my arrest or incarceration as being my fault, but the fault of others (Parole Officer, Police Officer, etc.). Therefore, I did not have to change my conduct because as long as it was someone else's fault for my troubles I never saw my own culpability. It was this distorted thinking that led me to continue transgressing society's laws without pausing to reflect on the damage I was doing to my future, not to mention to society in general. Yes, I am very ashamed of my inability to make change in my life while I was still a part of society. The truth is that I really should not have had to come to prison to make positive change, but that is what it took and I am thankful that I did.

I grew up in a strong, loving family that taught/showed my fine examples of what living right was. Though my parents separated when I was young I grew up spending a considerable amount of time living with my father. He was my hero and provided me with a wonderful example of manhood & responsibility. However, as I became a teenager my father became addicted to drugs, this event shattered my life's direction, and as a result I took to the streets in a naïve effort to find the example of a man that I felt I had lost. And by age 16 I was waived into the adult prison system. When I emerged after that first incarceration at the age of 18 I was convinced that because of my status as an ex-con I would never be fully accepted back into society. This pessimistic falsehood led to a feeling of being rejected by society and my adolescent, reactionary response was in turn, to reject society.

It was the psychological surrender to this feeling of rejection that allowed my to continue in my criminal behavior without any feeling of wrongdoing. As a child feeling shunned, I thought since there now no place for me within society because of my status as a felon I would simply exist in the world outside of society.

I now understand that it was this distorted thinking that led me to five incarcerations. I no longer think or feel this way. In fact, I now know that as long as I have a positive outlook there is always a place for me in society.

I come from a community that has many problems and instead of using my intellect, skills, and strengths that I was blessed with to help bring about positive change I helped bring about further erosion. This reality too, is a source of shame for me. But rather than allow the tremendous amount of shame I feel about my past conduct paralyze me, I use it as the chief motivation to fuel my commitment to not only become a better man, overcome my past, & build a brighter future. But I also plan to return to my community and assist in fixing that which I helped to break.

My personal dedication to change has been consistent & constant throughout my incarceration. I chose not to wait until I became eligible for parole to begin positive actions but rather began doing so immediately upon my arrest.

The initial work toward self-progression was done internally. I had to essentially change who I was and the person I used to be. Which, I was able to do as I said by self-introspection. In order to do this I had to realign my whole thinking pattern from that of someone wronged to someone who chose to live far below his potential. Once I accepted this I began to tap into that well of potential that I had allowed to stay dormant for so long. I did not accomplish this simply by thinking different, I prayed that my heart and mind would be changed for the better, and then I set about seeking the knowledge that would help me to do so.

A great part of my self-progress comes from the spiritual growth that I have experienced since my arrest in 1997. A person's relationship with The Supreme Being has always been viewed as private in our society and I will keep that tradition here, but I am convinced that the continuity of my change has been sustained solely by my spirituality. It inspires me, challenges me, guides me, and strengthens me.

You seem to have become incredibly insightful and you are to be commended for that.

You are the perfect example of what I truly believe... that we should never give up on each other. I'm told at university often "this is a difficult concept and it may take you a while to get it, it could take a week, a month, or it may not gel in your mind until after you've graduated". I think that's a useful thing to hear so that we give ourselves room to process concepts foreign to us. What a shame that we don't get this information earlier in life in relation to how to live a good and productive life. When we appear, (in our own minds) to fail, we are our own worst critics. Feeling 'ashamed' of ourselves is not a useful emotion my any means. Imagine if we were given permission to feel that errors in judgment were not only ok, but a natural and necessary part of growing up. How much easier would our journeys be?

I'm glad to hear you've finally got it, sad to hear you took the hard road to get there though. I don't think it matters how long life concepts take to gel in our minds, what matters is that when we get there we do all we can to assist the next generation who are taking their turn to "mess things up". When you are able to do this, you can begin to count your successes, rather than your failures.

Thank you for sharing. 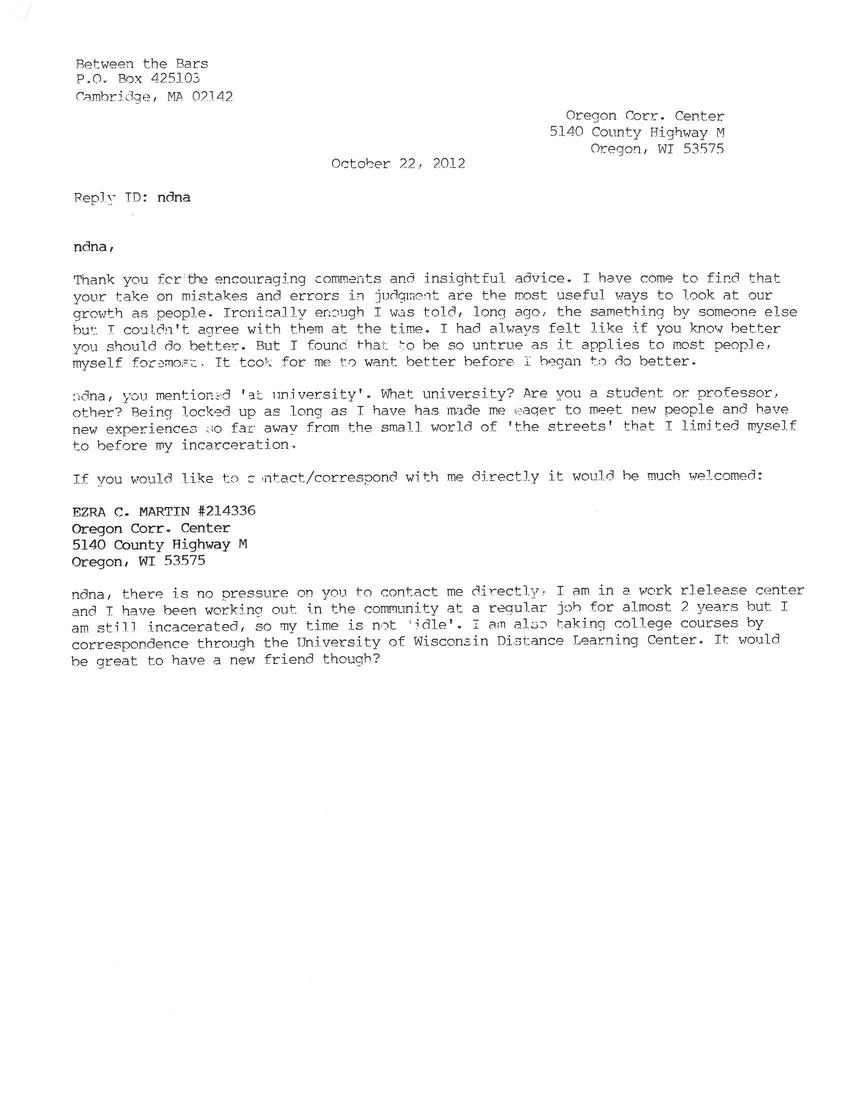 Thank you for your reply. To answer your question, the University I attend is James Cook University, in Townsville Australia. I am a mature aged student (it took me a long time to decide what I wanted to be when I grew up ;) I am studying Psychology and Criminology with a view to initially working in probation & parole here in Australia & I have 6 months of studies to go before I graduate.

& you're no different from anyone else, we don't generally take on information or advice from others until we are ready to hear and accept it, & that makes our progression as humans so slow. But as long as we get there eventually, and don't give up on those that take a little longer, I think that's what's important. :)

I'm a little busy at the moment with studies, work (& being a single Mum) so if you don't mind I'm happy corresponding with you via Btb for now.

I'd love to hear more about your work release program. What sort of work you do exactly? & what you get out of it personally? I'm glad to hear your time is not idle. I think we're all better off if we can use our time constructively. I'd also like to know whether or not you encounter negative attitudes from people while you're working and if so, how you deal with that?

Take care. & I look forward to hearing from you again soon. 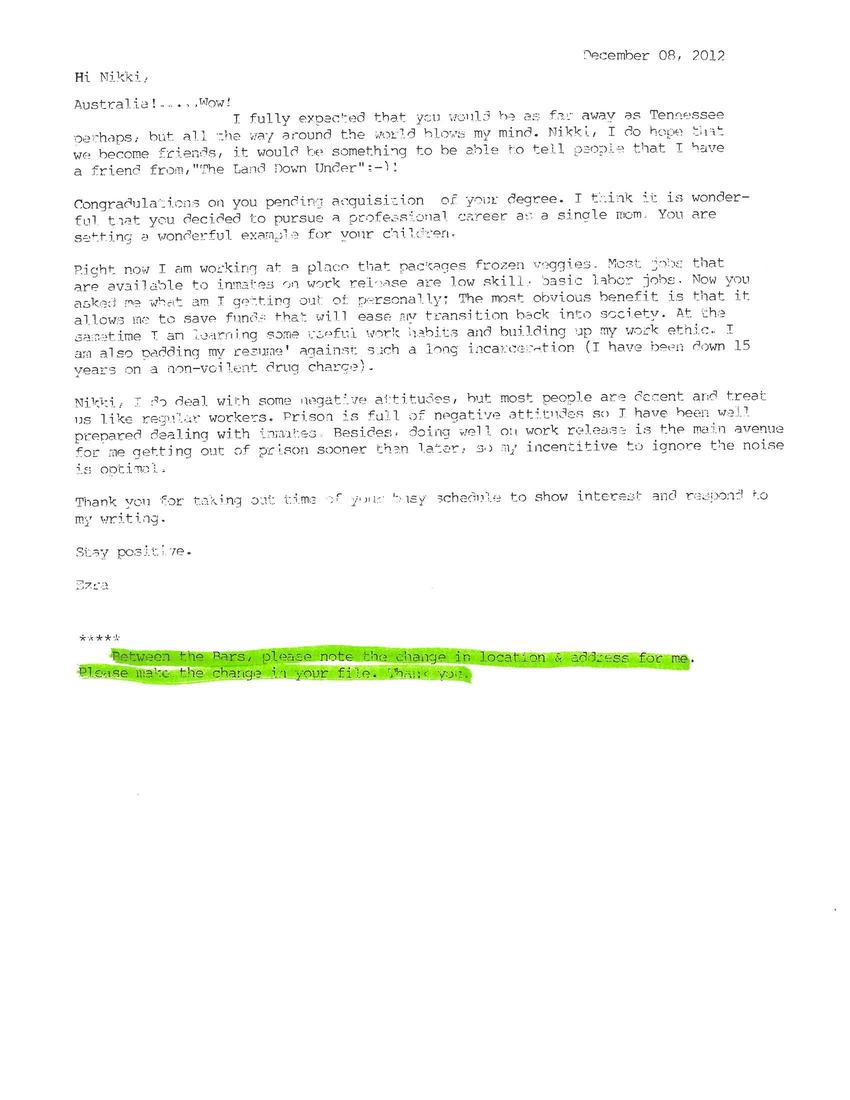 Hi Ezra, thank you for your reply. I've just been going back through to those I haven't responded to. I get notifications on my phone when you have sent in a reply, but I'm often not at my computer when I read them so it can be easy to overlook them with all the distractions around me.

Thank you for answering my questions, I'm still intrigued by your work release program and would like to know more. I actually didn't know the USA had work release programs in place. We have some here in Australia too, which were born out of natural disasters beginning in the 1990s. Prisoners assisted farmers to clean up their properties after floods or cyclones (you call them hurricanes). Here in my part of the world it was the banana farmers that needed the most help and there have been a lot of success stories that have come out of those projects. Things like 'people that had never worked before were offered work on that property after their release'.

How did you become eligable for your work release program & did you have a choice of the type of work you do? It sounds like there are other inmates that work with you, is that the case? and how are you transported to and from your job? Are you paid the same rate as other workers..? Too many questions..? haha.

I'm interested because I think putting people to work is the best form of rehabilitation there could be. After the things you identified in your last reply as to what you get out of it, I know you know what I'm talking about. Other than the necessary, healthy social interactions, the biggest thing work gives us, in my opinion, is self confidance and a sense of self worth, 'a purpose' and that's what so many people in the prisons of the world could benifit from in my humble opinion.

I will send you an Aussie card as a token of my appreciation for answering my never ending questions :) Your friend Nicki