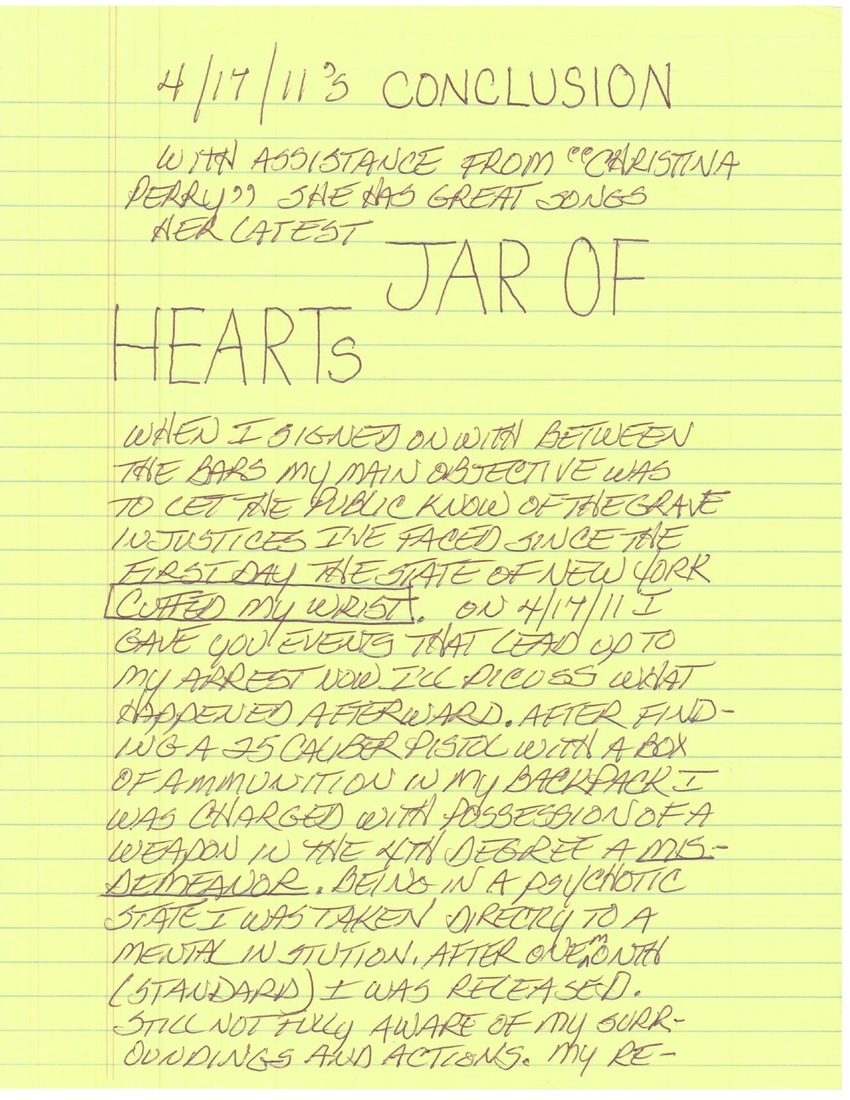 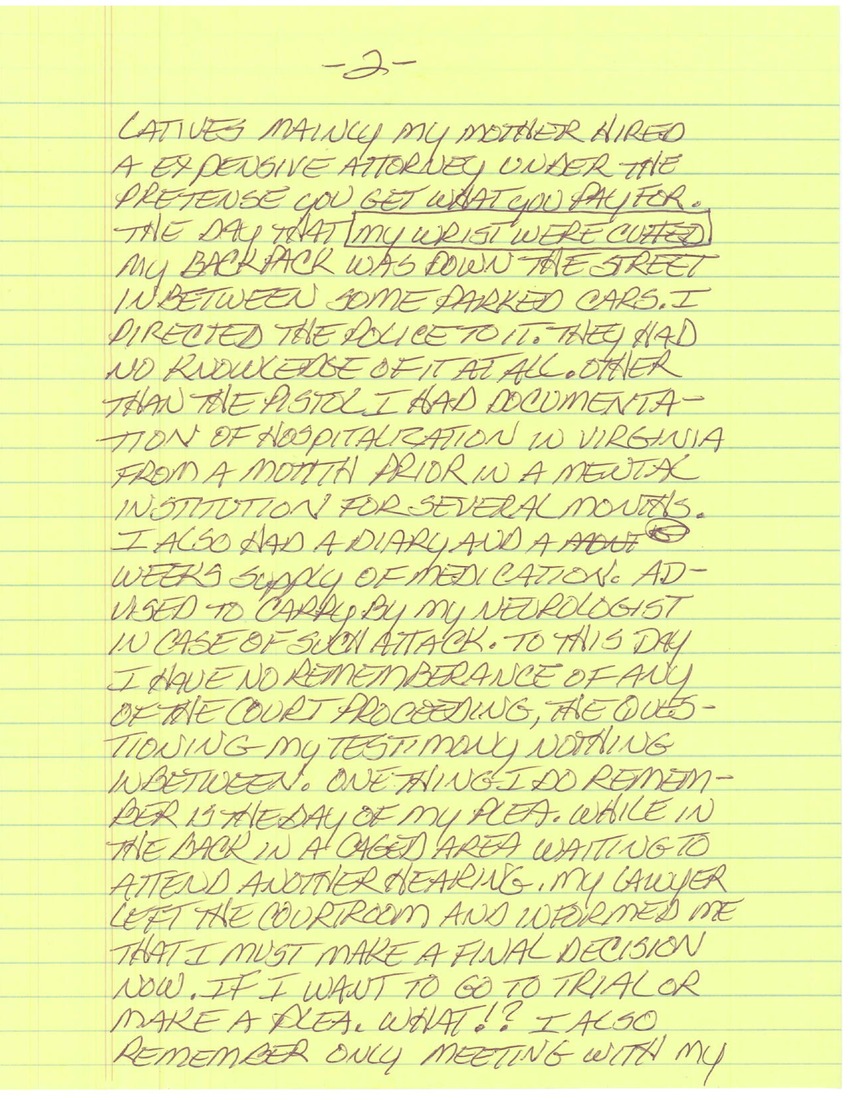 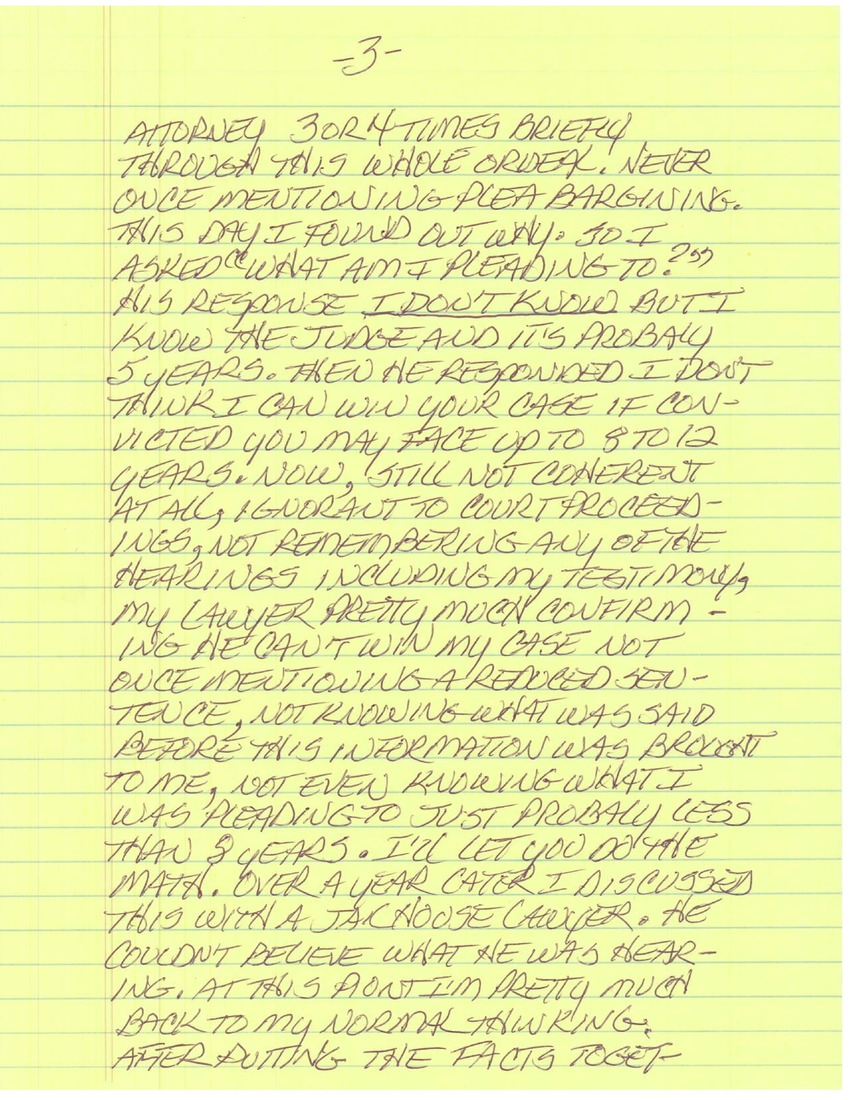 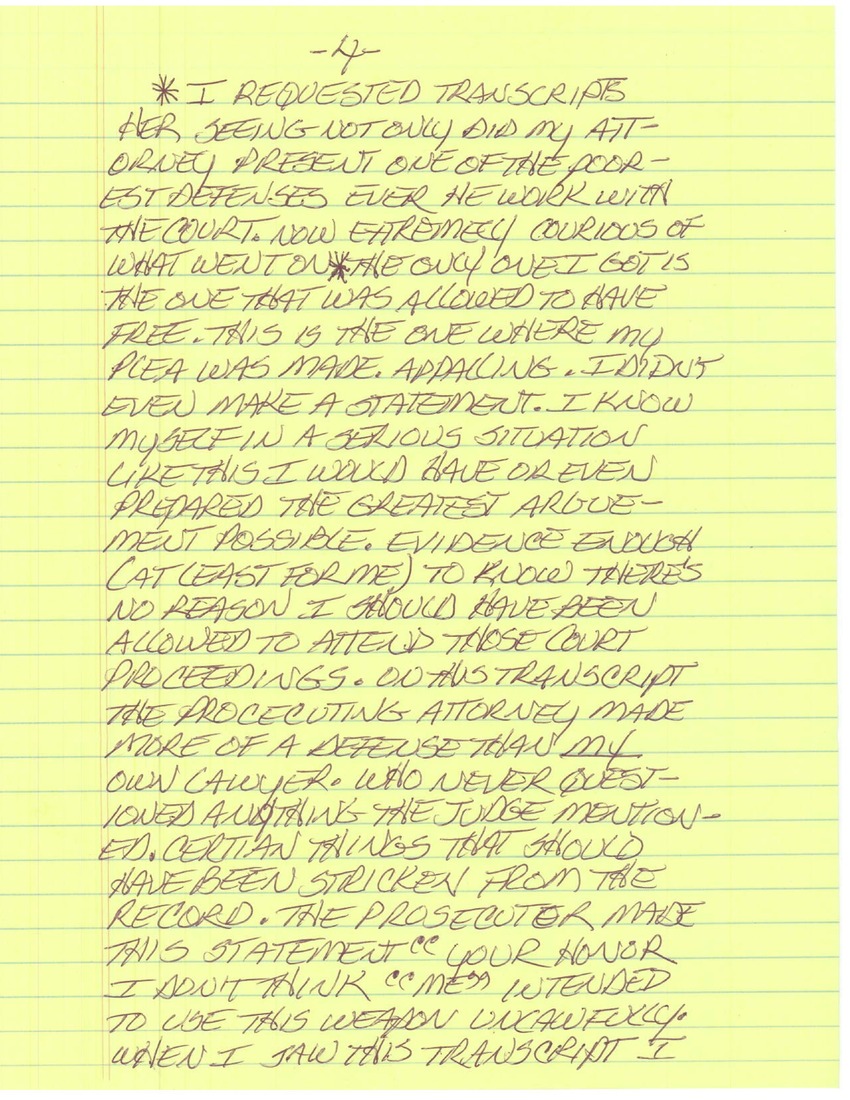 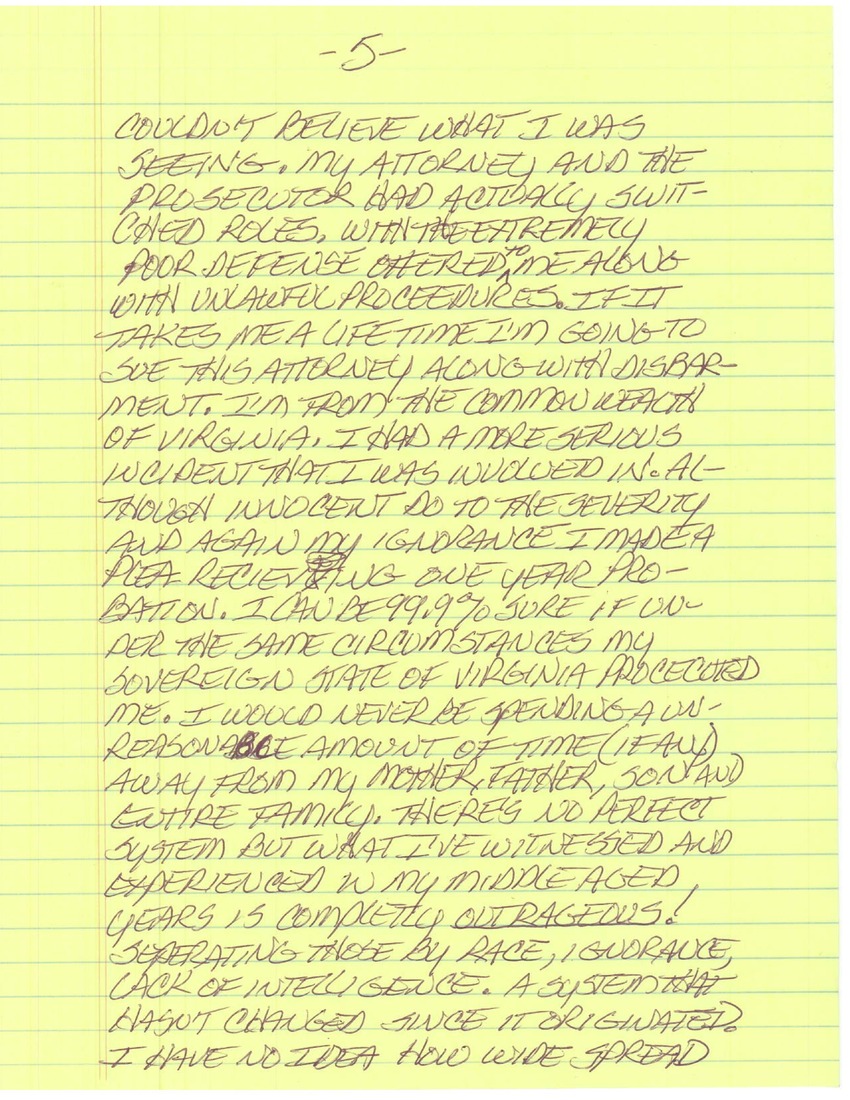 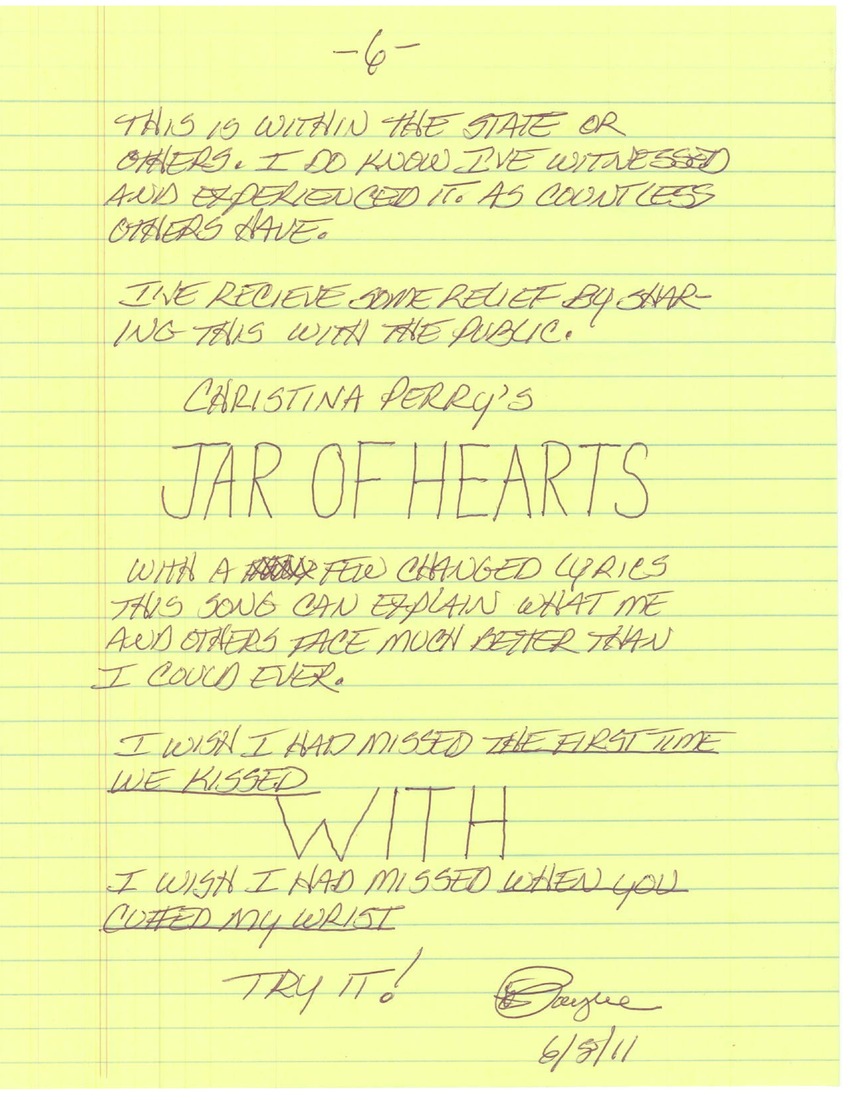 4/17/11's CONCLUSION
With assistance from Christina Perry. She has great songs. Her latest: JAR OF HEARTS.

When I signed on with Between the Bars my main objective was to let the public know of the grave injustices I've faced since the first day the state of New York cuffed my wrist. On 4/17/11, I gave you events that led up to my arrest. Now I'll discuss what happened afterward.

After finding a 25 caliber pistol with a box of ammunition in my backpack, I was charged with possession of a weapon in the 4th degree, a misdemeanor. Being in a psychotic state, I was taken directly to a mental institution. After one month (standard), I was released. Still not fully aware of my surroundings and actions, my relatives (mainly my mother) hired an ex-defensive attorney under the pretense of "you get what you pay for."

The day that my wrists were cuffed, my backpack was down the street in between some parked cars. I directed the police to it. They had no knowledge of it at all. Other than the pistol, I had documentation of hospitalization in Virginia from a month prior in a mental health institution for several months. I also had a diary and a week's supply of medication. Advised to be carried by my neurologist in case of such an attack.

To this day, I have no remembrance of any of the court proceedings, the questioning of my testimony—nothing in between. The one thing I do remember is the day of my plea. While in the back of a caged area, waiting to attend to another hearing, my lawyer left the courtroom and informed me that i must make a final decision now. If I want to go to trial or make a plea. WHAT!? I also remember briefly meeting with my attorney only three or four times through this whole ordeal. Never once mentioning plea bargaining. This day, I found out why.

So I asked, "What am I pleading to?" His response, I don't know. "But I know the judge, and it's probably five years." Then he responded, "I don't think I can win your case. If convicted, you may face up to eight to twelve years."

Now, still not coherent at all, ignorant to court proceedings, not remembering any of the hearings, including my testimony, my lawyer pretty much confirming he can't win my case not once mentioning a reduced sentence, not knowing what was said before this information was brought to me, not even knowing what I was pleading to, just probably less than five years—I'll let you do the math.

Over a year later, I discussed this with a jailhouse lawyer. He couldn't believe what he was hearing. At this point, I'm pretty much back to my normal thinking. After putting the facts together, seeing not only did my attorney present one of the poorest defenses ever, he worked with the court.

Now extremely curious of what went on, I requested transcripts. The only one I got is the one that I was allowed to have for free. This is the one where my plea was made. Appalling. I didn't even make a statement. I know myself in a serious situation like this, I would have or even prepared the greatest argument possible. Evidence enough (at least, for me) to know there's no reason I should have been allowed to attend those court proceedings.

On this transcript, the prosecuting attorney made more of a defense than my own lawyer. He never questioned anything the judge mentioned. Certain things that should have been stricken from the record. The prosecutor made this statement, "Your honor, I don't think [me] intended to use this weapon unlawfully." When I saw this transcript, I couldn't believe what I was seeing. My attorney and the prosecutor had actually switched roles with the extremely poor defense offered to me, along with unlawful proceedings.

If it takes me a lifetime, I am going to sue this attorney along with disbarment.

I'm from the Commonwealth of Virginia. I had a more serious incident that I was involved in. Although innocent due to the severity and again my ignorance, I made a plea, receiving one year probation. I can be 99.9% sure, if under the same circumstances, my sovereign state of Virginia procecoted me. I would never be spending an unreasonable amount of time, if any, away from my mother, father, son, and entire family.

I've received some relief by sharing this with the public.

With a few changed lyrics, this song can explain what me and others face much better than I ever could.

I wish I had missed the first time
we kissed

I miss I had missed when you
cuffed my wrist

From what you've written, sounds to me like you were done wrong from the beginning. Your attorney sounded terrible. And things didn't get any better once you got to prison. Don't get discouraged, you'll be out soon.
Hey I finally found the page url but to tell u the truth I bet a 15 year old could have defended u better than that but don't worry because ur time is almost up and that day will have more meaning to me than any other day. A few more songs to add that have a lot of meaning to them would be good life by one republic if you hear it then it might make ur outlook on things as they stand a lot easier than they appear but I will check back everyday to c ur new develops. :)