A Call to Arms: Catalysts For Change 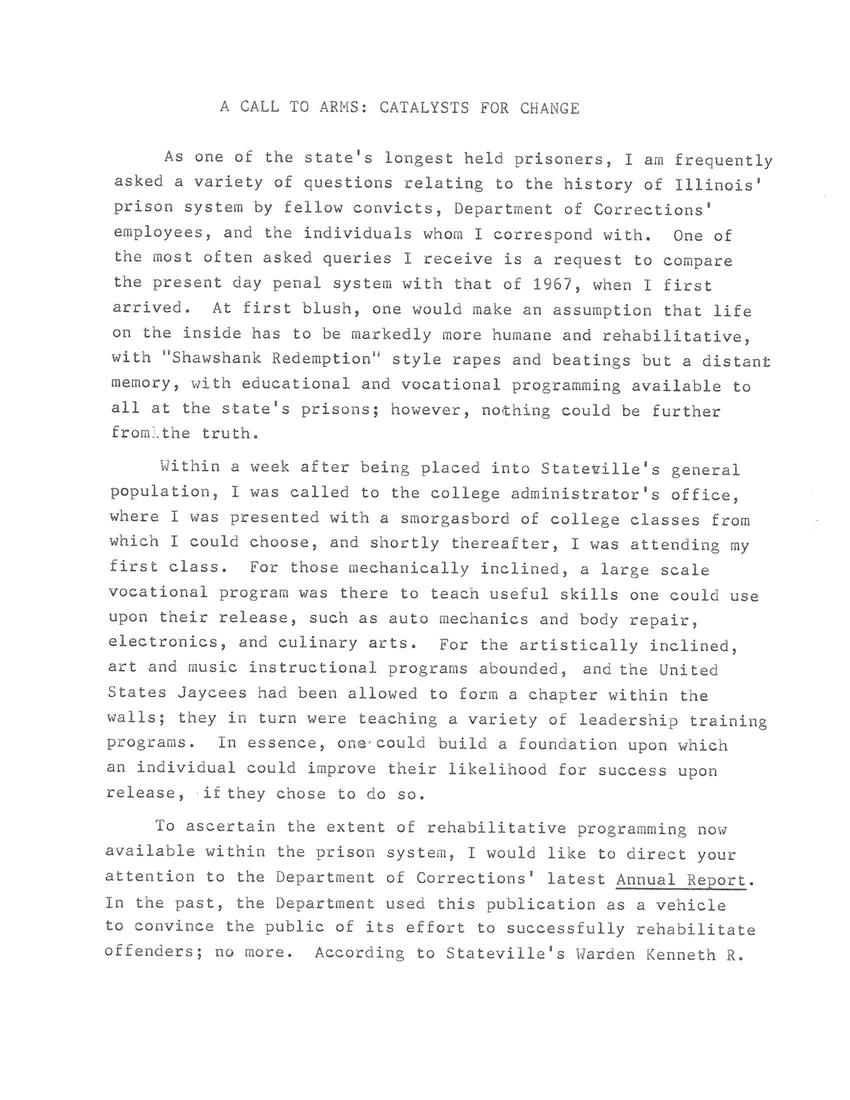 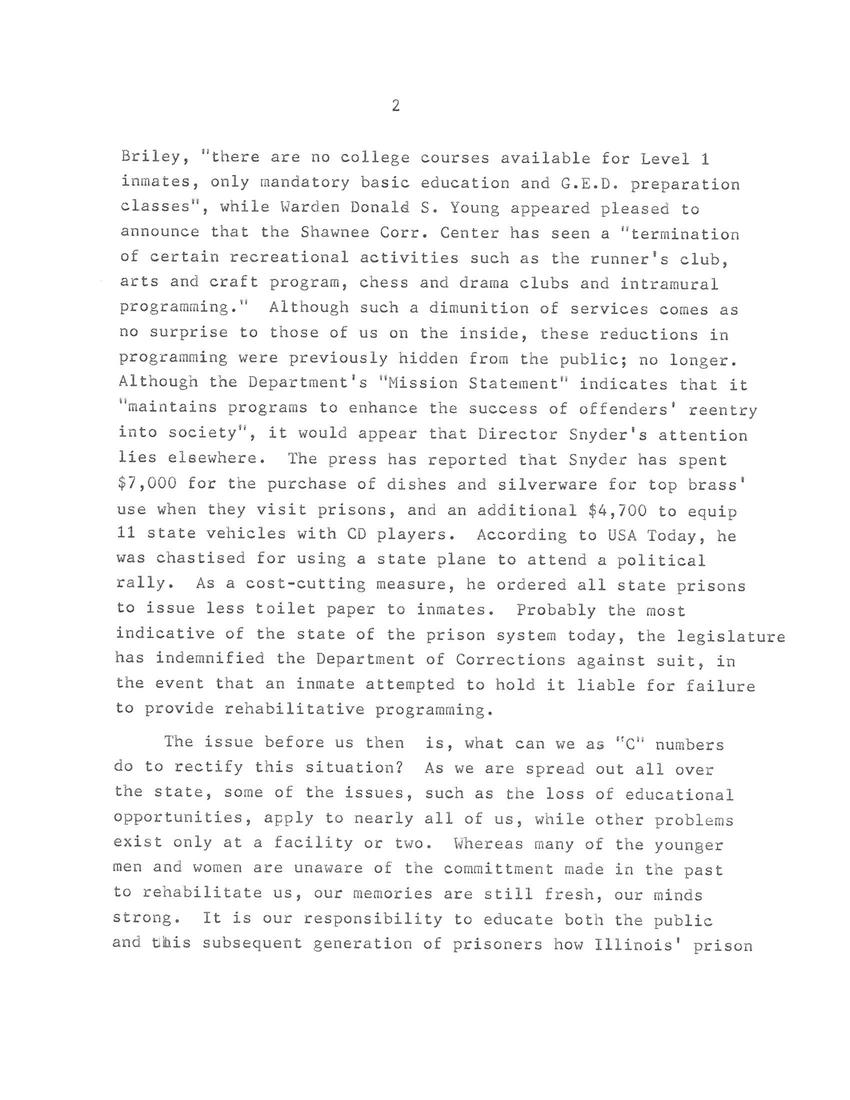 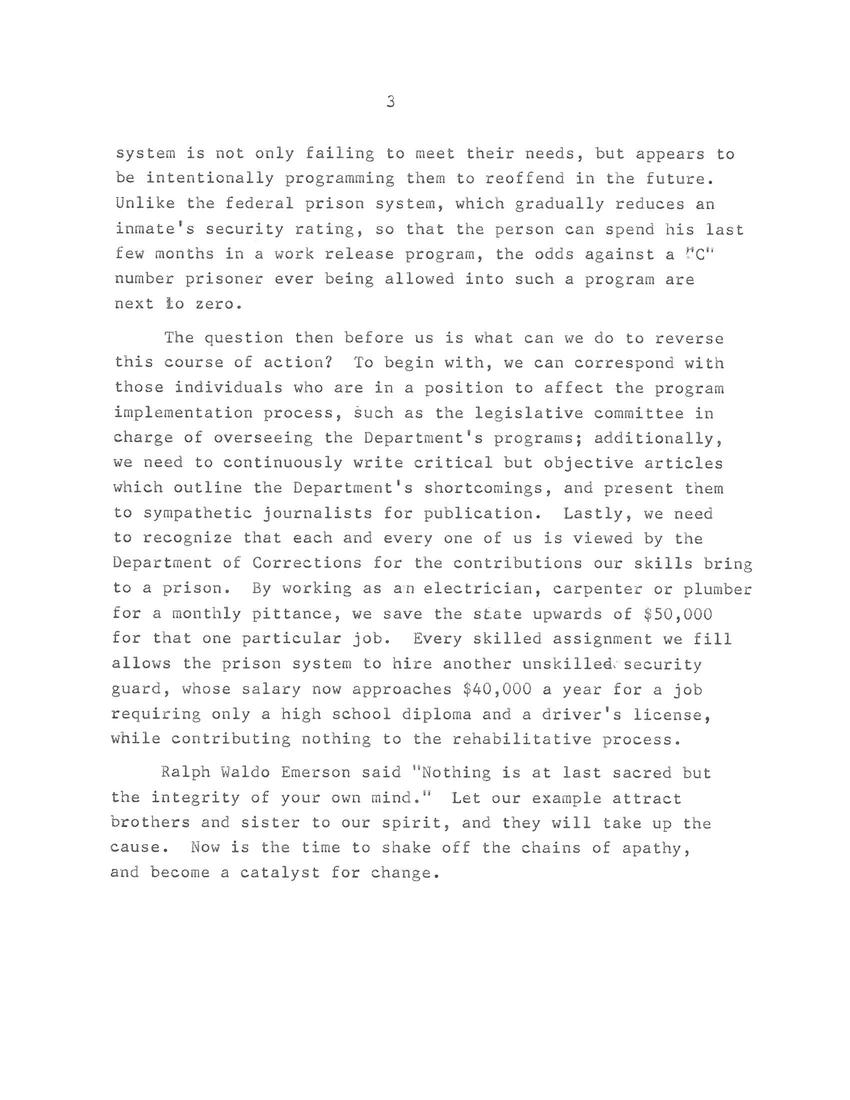 A Call to Arms: Catalysts for Change

As one of the state's longest-held prisoners, I am frequently asked a variety of questions relating to the history of Illinois' prison system by fellow convicts, Department of Corrections' employees, and the individuals who I correspond with. One of the most often asked queries I receive is a request to compare the present day penal system with that of 1967, when I first arrived. At first blush, one would make an assumption that life on the inside has to be markedly more human and rehabilitative with "Shawshank Redemption" style rapes and beatings but a distant memory, with education and vocational programming available to all at the state's prisons; however, nothing could be further from the truth.

Within a week after being placed into Stateville's general population, I was called to the college administrator's office, where I was presented with a smorgasbord of college classes from which I could choose, and shortly thereafter, I was attending my first class. For those mechanically inclined, a large vocational program was there to teach useful skills one could use upon their release, such as auto-mechanics and body repairs, electronics, and culinary arts. For the artistically inclined, art and music instructional programs abounded, and the United States Jaycees had been allowed to form a chapter within the walls; they in turn were teaching a variety of leadership training programs. In essence, one could build a foundation upon which an individual could improve their likelihood for success upon release, if they chose to do so.

To ascertain the extent of rehabilitative programming now available within the prison system, I would like to direct you attention to the Department of Correction' latest annual report. In the past, the department used this publication as a vehicle to convince the public of its effort to successfully rehabilitate offendors; no more. According to Stateville's Warden Kenneth R. Briley, "there are no college courses available for level 1 inmates, only mandatory basic education and G.E.D. preparation classes," while Warden Donald S. Young appeared to announced that the Shawnee Corr. Center has seen a "termination of certain recreational activities activities such as the runner's club, arts and craft program, chess and drama clubs and intramural programming." Although such a diminution of services come as no surprise to those of us on the inside, these reductions in programming were previously hidden from the public; no longer. Although the department's "mission statement" indicates that it "maintains programs to enhance the success of offenders' re-entry into society," it would appear that Director Snyder's attention lies elsewhere. The press has reported that Snyder has spent $7,000 for the purchase of dishes and silverware for top brass' use when they visit prisons, and an additional $4,700 to equip 11 state vehicles with CD players. According to USA Today, he was chastised for using a state plane to attend a political rally. As a cost-cutting measure, he order all state prisons to issue less toilet paper to inmates. Probably the most indicative of the state of the prison system today, the legislature has indemnified the Department of Corrections against suit, in the event that an inmate attempted to hold it liable for failure to provide rehabilitative programming.

The issue before us then is, what can we as "C" numbers do to rectify this situation? As we are spread out all over the state, some of the issues, such as the loss of educational opportunities, some of the issues, such as the loss of educational opportunities, apply to nearly all of us, while other problems exist only at a facility or two. Whereas many of the younger men and women are unaware of the commitment made in the past to rehabilitate us, our memories are still fresh, our minds strong. It is our responsibility to educate both the public and this subsequent generation of prisoners how Illinois' prison system is not only failing to meet their needs, but appears to be intentionally programming them to re-offend in the future. Unlike the federal prison system, which gradually reduces an inmate's security rating, so that the person can spend his last few months in a work release program, the odds against a "C" number prisoner ever being allowed into such a program are next to zero.

The question then before us is what can we do to reverse this course of action? To begin with, we can correspond with those individuals who are in a position to affect the program implementation process, such as the legislative committee in charge of overseeing the department's programs' additionally, we need to continuously write critical but objective articles which outline the department's shortcomings, and present them to sympathetic journalists for publication. Lastly, we need to recognise that each and every one of us is viewed by the Department of Corrections for the contributions our skills bring to a prison. By working as an electrician, carpenter or plumber for a monthly pittance, we save the state upwards of $50,000 for that one particular job, Every skilled assignment we fill allows the prison system to hire another unskilled security guard, whose salary now approaches $40,000 a year for a job requiring only a high school diploma and a driver's license, while contributing nothing to the rehabilitative process.

Ralph Waldo Emerson said "nothing is at last sacred but the integrity of your mind." Let our example attract brothers and sister to our spirit, and they will take up the cause. Now is the time to shake off the chains of apathy, and become a catalyst for change.

Hello George my dearest, did you receive some responses on your blog? I hope so!
I had seen TTall's blog in the beginning, .. but it is gone, wonder why?

Are you working already with Jessica around your case?

John told me your dad is doing well,he walks with a cane and can go home pretty soon.

Can you give me an answer by blog, love? Sometimes it's faster this way, especially if the time is near the day they issue it to you! Like it will be this Monday, 8th.
More rapid than a letter! ;-))))
Take care and know I care! xxxx from your sweetie
Hey my darling.. what are you up to?! In front of my computer, instead of a letter, eh... You will read this pretty soon, thus I've to tell you of my latest news now.

Well, my phone is not doing well. I thought it was the machine, I bought a new one today, and apparently it's something tecknical. Tomorrow a tecknician has to come.

With all the help etc via my gsm she wasn't able to fix it and I lost a lot of time. So , no visit at Clementine's. Her moral is a little bit better.She even gave me a silk yellowish blouse. I'll visit her tomorrow, then.
Better start finally my essay about 'Tango'.
Only i've to think very well.......

Agnes from Inside Outside, IO, asks us all to write to Texas for acting against the murders on Death Row.It sounds like this: Death Penalty is a violation of human rights, is degrading the human dignity and is no longer accepted in modern civilized countries. The USA has more methods of execution (5) than any other country in the world, and they use them all: gassing, electrocution, firing squads, hanging and chemical poisoning.
There are alternative punishments to guarantee safety to the world. Executions are immoral, whether they are public beheadings in Saoudi Arabia, public shootings in China, or prison executions in the USA/Texas...
European drug manufacturers have stopped selling their drugs to states which execute people.

We write those to Texas Board of Pardons and Paroles, to the governor Rick Perry, to the ambassy of Amerika and to the Netherlands Business Support Office.
Many will write!! They are now in Texas at nr 500 pretty soon!................

a volunteer to fight against this cruelty, your love, Rita xxxxxxxx
A gorgeous day it was today!
Hello darling, man of my lonely heart.

I did 3 turns walking in the park and then read the book: 'Bonjour Tristesse' from Fancoise Sagan. She wrote it at 18 and it was right away a bestseller! Translated in many languages.

A man living in front of the street here, is cleaning every day his windows! Marlene asked me if he would do hers! Haha...I noticed today! I think he's addictzd, to cleaning windows. Belgians are strange....

a sunnywarm hug from Rita xxxxxx
My sweetie, and how are you doing right now...

The latest news is: Karel is going to marry Mariana this year. In September they are coming to Europe.

We don't know yet what Leslie and Philip will decide concerning their future?

My last day at the writing class. Yella asked about ur weaknesses and about our strenghts ?
Also what we view for the future?

Here a saying for you: 'The one who walks in a gentle way comes far'. Beautiful!

Well, you will read it later then i see you. i am at my hotel in Chicago now. I m tired and go asleep. i ll see when i wake up... perhaps not the courage to swim in the swimming pool.. :-(

I wish you all the best with the PB on August 6th!
I am writnig right now a letter in your favor.