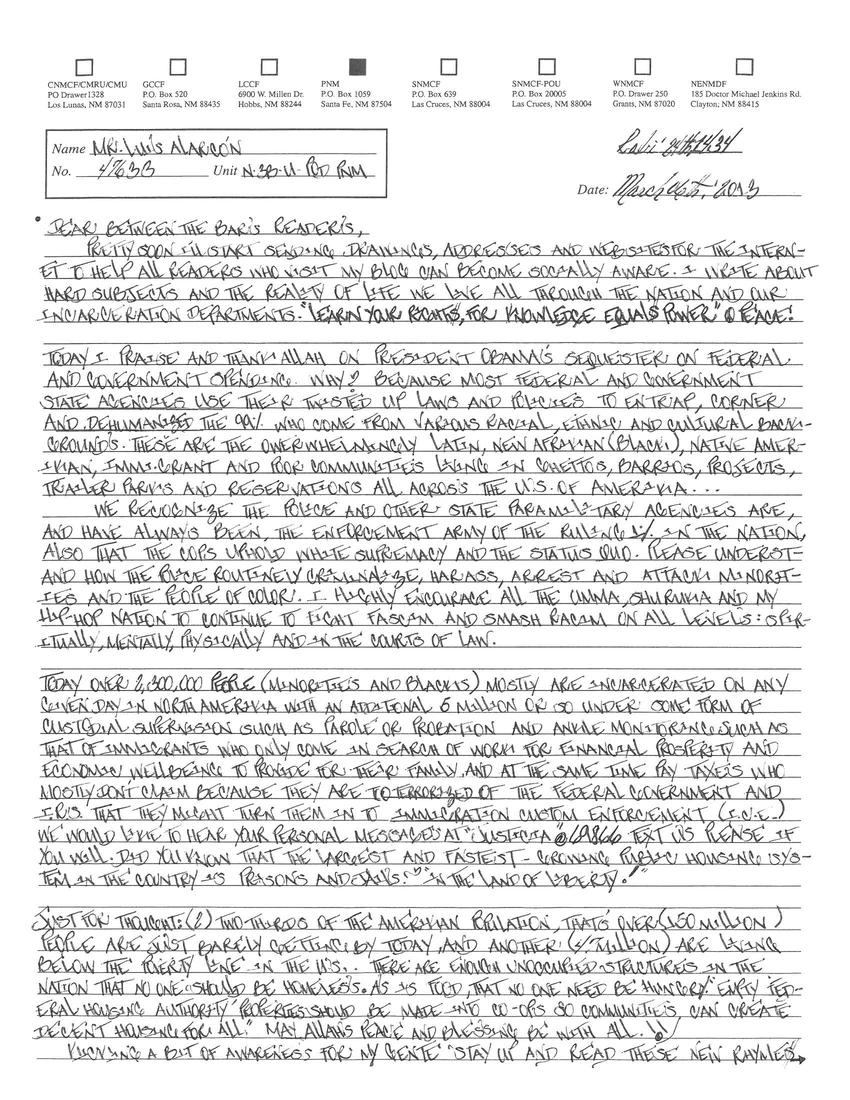 Dear Between the Bars readers,

Pretty soon I'll start sending drawings, addresses and websites for the internet to help all readers who visit my blog can become socially aware. I write about hard subjects and the reality of life we live all through the nation and our incarceration departments. "Learn your rights, for knowledge equals power." Peace!

Today I praise and thank Allah on President Obama's sequester on federal and government spending. Why? Because most federal and government state agencies use their twisted up laws and policies to entrap, corner and dehumanize the 99% who come from various racial, ethnic and cultural backgrounds. These are the overwhelmingly Latin, New Afrikan (black), Native American, immigrant and poor communities living in ghettos, barrios, projects, trailer parks and reservations all across the U.S. of America...

We recognize the police and other state paramilitary agencies are, and have always been, the enforcement army of the ruling 1% in the nation, also that the cops uphold white supremacy and the status quo. Please understand how the police routinely criminalize, harass, arrest and attack minorities and the people of color. I highly encourage all the Umma, Shuruka and my hip-hop nation to continue to fight fascism and smash racism on all levels: spiritually, mentally, physically and in the courts of law.

Today over 2,300,000 people (minorities and blacks) mostly are incarcerated on any given day in North America with an additional 5 million or so under some form of custodial supervision such as parole or probation and ankle monitoring such as that of immigrants who only come in search of work for financial prosperity and economic wellbeing to provide for their family, and at the same time pay taxes who mostly don't claim because they are too terrorized of the federal government and I.R.S. that they might turn them in to Immigration Customs Enforcement (I.C.E.). We would like to hear your personal messages at "Justicia" 069866, text us please if you will. Did you know that the largest and fastest-growing public housing system in the country is prisons and jails? "In the land of liberty!"

Just for thought: (2) two thirds of the American population, that's over (150 million) people are just barely getting by today, and another (47 million) are living below the poverty line in the U.S. There are enough unoccupied structures in the nation that no one should be homeless. As is food that no one should be hungry. Empty federal housing authority properties should be made into co-ops so communities can create decent housing for all. May Allah's peace and blessing be with all. :)

Kicking a bit of awareness for my Gente, stay up and read these new rhymes.