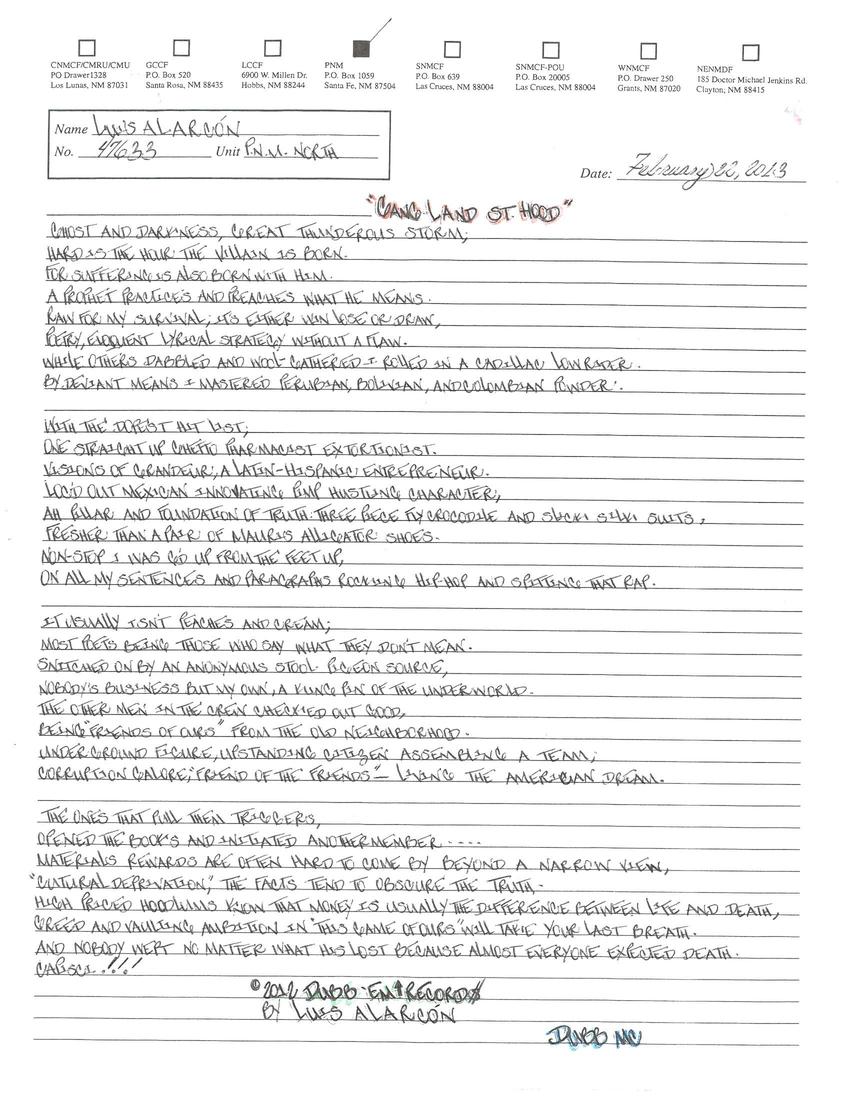 Ghost and darkness, great thunderous storm;
Hard is the hour the villain is born.
For suffering is also born with him.
A prophet practices and preaches what he means.
Raw for my survival; it's either win, lose or draw,
Poetry, eloquent lyrical strategy without a flaw.
While others dabbled and wool-gathered I rolled in a Cadillac low ride.
By deviant means I mastered Peruvian, Bolivian, and Colombian powder.

With the dopest hit list;
One straight up ghetto pharmacist extortionist.
Visions of grandeur; a Latin-Hispanic entrepreneur.
Loc'd out Mexican innovating pimp hustling character;
Ah pillar and foundation of truth: three piece fly crocodile and slick, silk, suits,
Fresher than a pair of Mauris alligator shoes.
Non-stop I was G'd up from the feet up,
On all my sentences and paragraphs rocking hip-hop and spitting that rap.

It usually isn't peaches and cream;
Most poets being those who say what they don't mean.
Snitched on by an anonymous stool-pigeon source,
Nobody's business by my own, a kingpin of the underworld.
The other men in the crew checked out good,
Being "friends of ours" from the old neighborhood.
Underground figure, upstanding citizen assembling a team;
Corruption galore, "friend of the friends" - living the American dream.

The ones that pull them triggers,
Opened the books and initiated another member...
Materials rewards are often hard to come by beyond a narrow view,
"Cultural deprivation", the facts tend to obscure the truth.
High priced hoodlums know that money is usually the difference between life and death,
Greed and vaulting ambition in "this game of ours" will take your last breath.
And nobody wept no matter what his lost because almost everyone expected death.
Capisce!!!