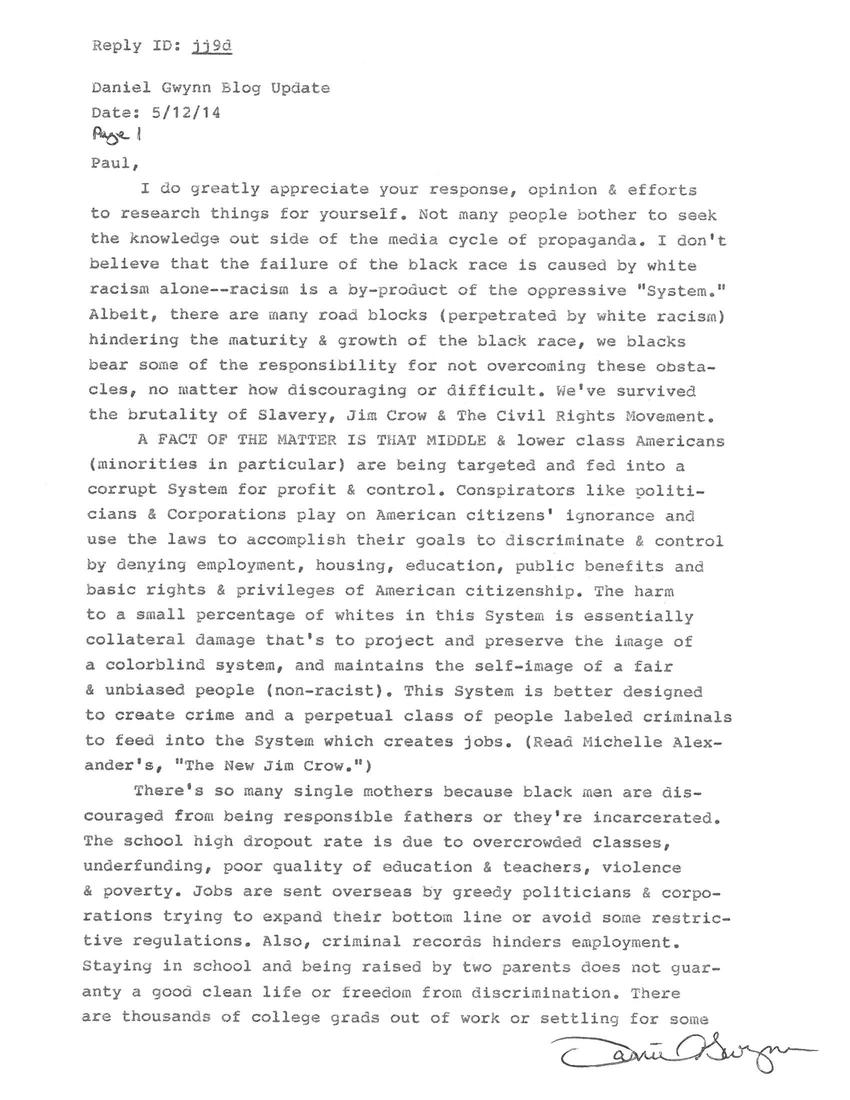 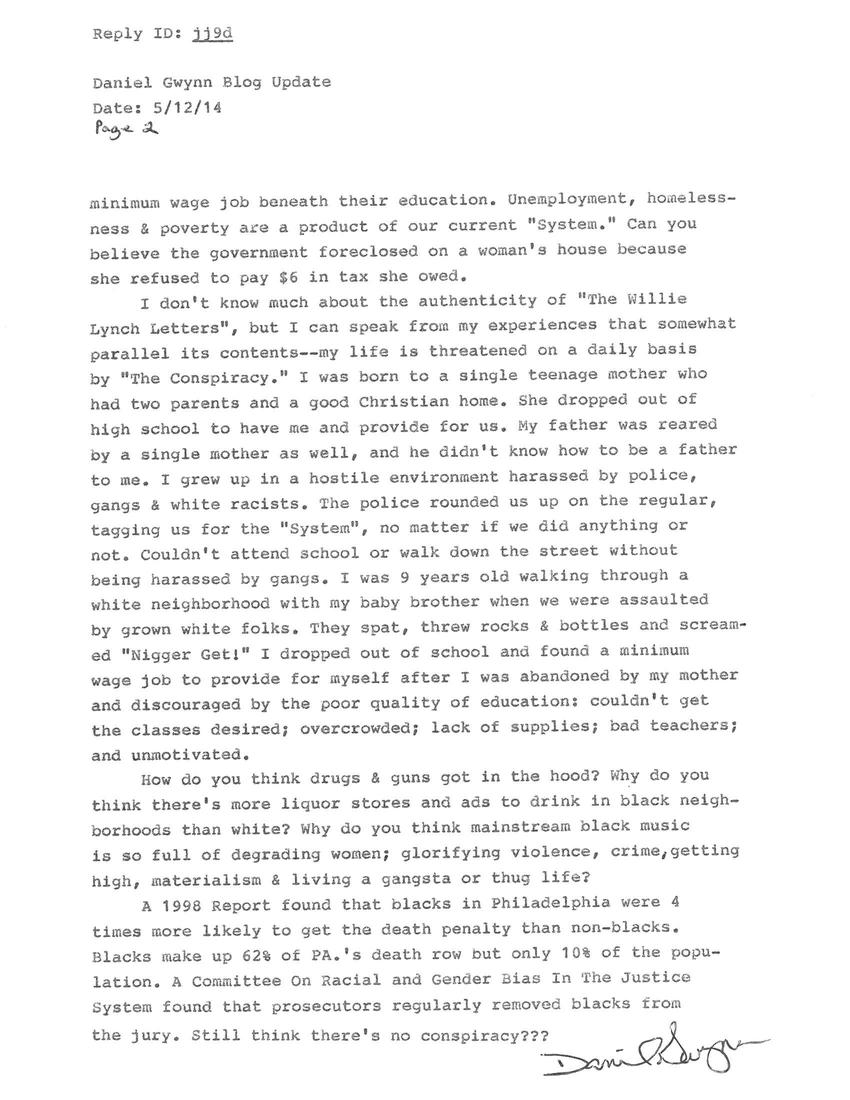 I do greatly appreciate your response, opinion, and efforts to research things for yourself. Not many people bother to seek the knowledge outside of the media cycle of propaganda. I don't believe that the failure of the black race is caused by white racism alone. Racism is a byproduct of the oppressive "system". Albeit, there are many roadblocks (perpetrated by white racism) hindering the maturity and growth of the black race, we blacks bear some of the responsibility for not overcoming these obstacles, no matter how discouraging or difficult. We've survived the brutality of slavery, Jim Crow, and the Civil Rights Movement.

A FACT OF THE MATTER IS THAT MIDDLE and lower class Americans (minorities in particular) are being targeted and fed into a corrupt system for profit and control. Conspirators like politicians and corporations play on American citizens' ignorance and use the laws to accomplish their goals to discriminate and control by denying employment, housing, education, public benefits, and basic rights and privileges of American citizenship. The harm to a small percentage of whites in this system is essentially collateral damage that's to project and preserve the image of a colorblind system, and maintains the self-image of a fair and unbiased people (non-racist). This system is better designed to create crime and a perpetual class of people labeled criminals to feed into the system which creates jobs (read Michelle Alexanders, The New Jim Crow).

There's so many single mothers because black men are discouraged from being responsible fathers or they're incarcerated. The school high dropout rate is due to overcrowded classes, underfunding, poor quality of education and teachers, violence, and poverty. Jobs are sent overseas by greedy politicians and corporations trying to expand their bottom line or avoid some restrictive regulations. Also, criminal records hinders employment. Staying in school and being raised by two parents does not guarantee a good clean life or freedom from discrimination. There are thousands of college grads out of work or settling for some minimum wage job beneath their education. Unemployment, homelessness, and poverty are a product of our current system. Can you believe the government foreclosed on a woman's house because she refused to pay $6 in tax she owed?

I don't know much about the authenticity of The Willie Lynch Letters, but I can speak from my experience that somewhat parallel its contents. My life is threatened on a daily basis by "the conspiracy". I was born to a single teenage mother who had two parents and a good Christian home. She dropped out of high school to have me and provide for us. My father was reared by a single mother as well, and he didn't know how to be a father to me. I grew up in a hostile environment harassed by police, gangs, and white racists. The police rounded us on the regular, tagging us for the "system", no matter if we did anything or not. Couldn't attend school or walk down the street without being harassed by gangs. I was 9 years old walking through a white neighborhood with my baby brother when we were assaulted by grown white folks. They spat, threw rocks and bottles, and screamed, "Nigger get!" I dropped out of school and found a minimum wage job to provide for myself after I was abandoned by my mother and discouraged by the poor quality of education. Couldn't get the classes desired, overcrowded, lack of supplies, bad teachers, and unmotivated.

How do you think drugs and guns got in the hood? Why do you think there's more liquor store and ads to drink in black neighborhoods than whites? Why do you think mainstream black music is so full of degrading women, glorifying violence, crime, getting high, materialism, and living a gangsta or thug life?

A 1998 report found that blacks in Philadelphia were four times more likely to get the death penalty than non-blacks. Blacks made up 62% of PA's death row, but only 10% of the population. A committee on racial and gender bias in the justice system found that prosecutors regularly removed blacks from the jury. Still think there's no conspiracy?