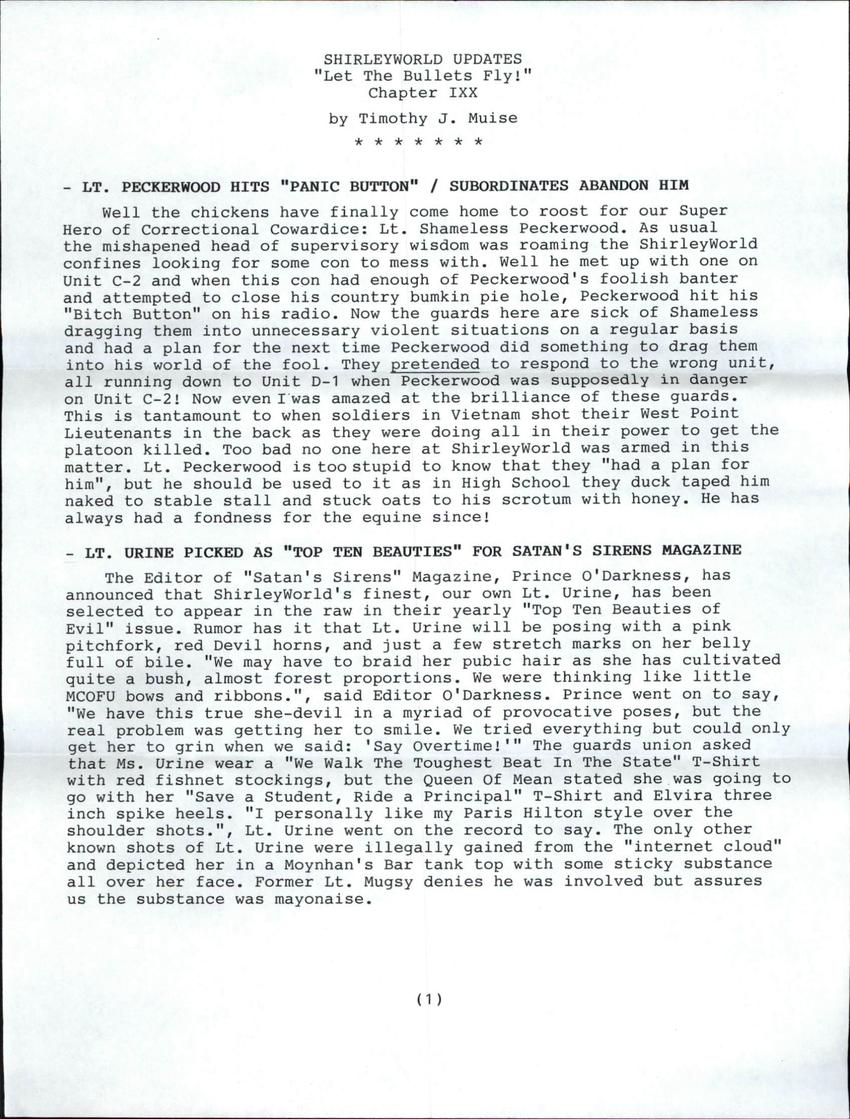 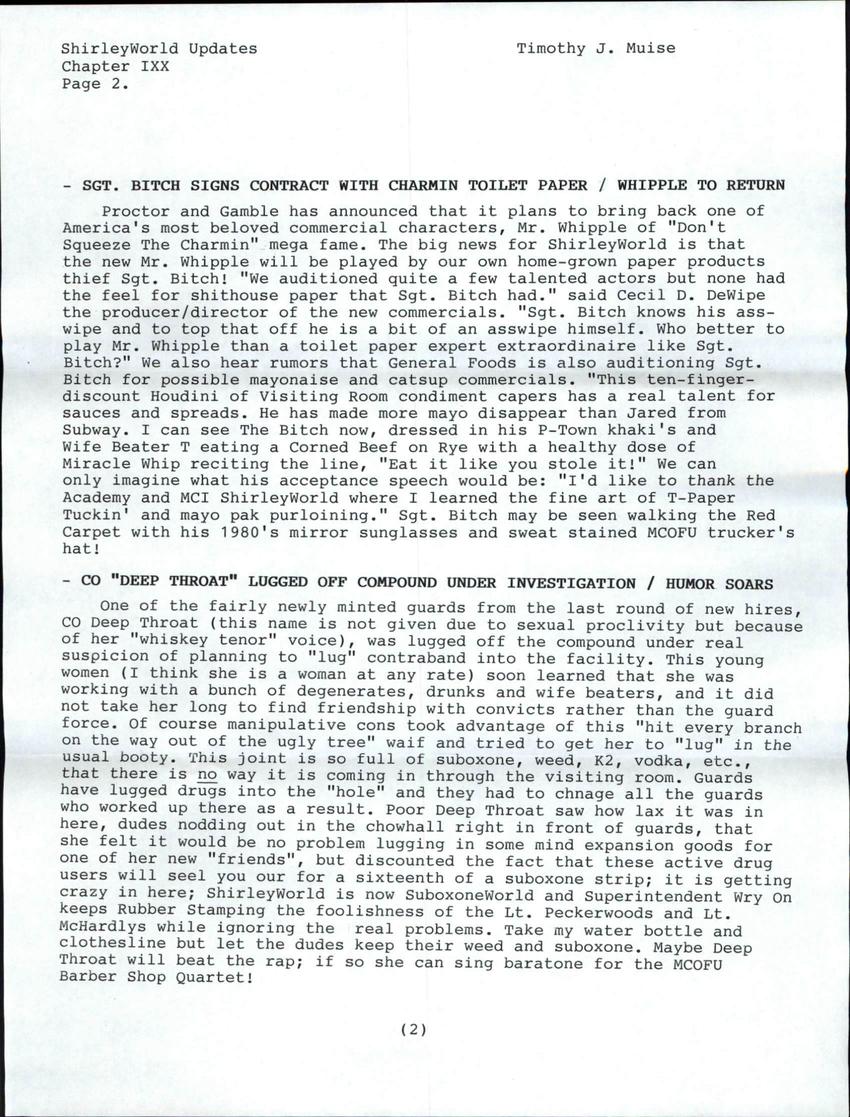 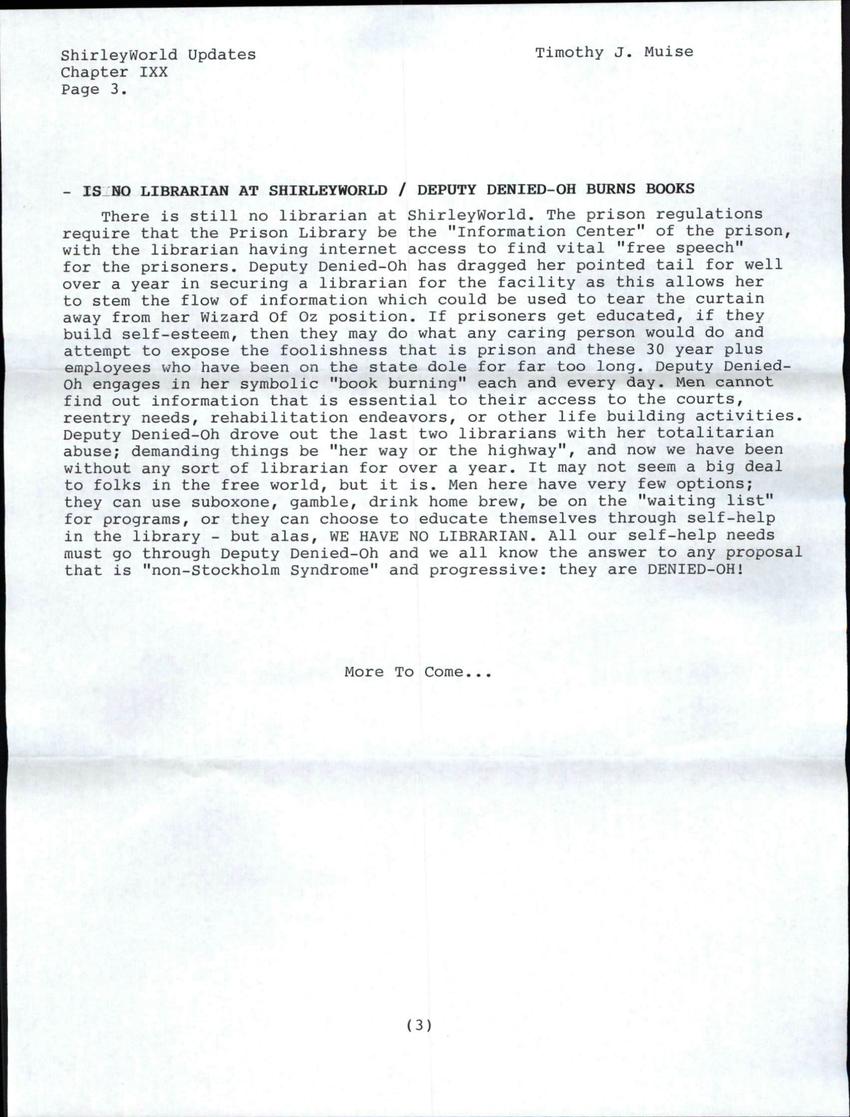 Well the chickens have finally come home to roost for our Super Hero of Correctional Cowardice: Lt. Shameless Peckerwood. As usual the mishapened head of supervisory wisdom was roaming the ShirleyWorld confines looking for some con to mess with. Well he met up with one on Unit C-2 and when this con had enough of Peckerwood's foolish banter and attempted to close his country bumkin pie hole, Peckerwood hit his "Bitch Button" on his radio. Now the guards here are sick of Shameless dragging them into unnecessary violent situations on a regular basis and had a plan for the next time Peckerwood did something to drag them into his world of the fool. The "pretended" to respond to the wrong unit, all running down to Unit D-1 when Peckerwood was supposedly in danger on Unit C-2! Now even I was amazed at the brilliance of these guards. This is tantamount to when soldiers in Vietnam shot their West Point Lieutenants in the back as they were doing all in their power to get the platoon killed. Too bad no one here at ShirleyWorld was armed in the matter. Lt. Peckerwood is too stupid to know that they "had a an for him", but he should be used to it as in High School they duck taped him naked to stable stall and stuck oats to his scrotum with honey. He has always had a fondness for the equine since!

The Editor of "Satan's Sirens" Magazine, Prince O'Darkness, has announced that ShirleyWorld's finest, our own Lt. Urine, has bee selected to appear in the raw in their yearly "Top Ten Beauties of Evil" issue. Rumor has it that Lt. Urine will be posing with a pink pitchfork, red Devil horns, and just a few stretch marks on her belly full of bile. "We may have to braid her pubic hair as she has cultivated quite a bush, almost forest proportions. We were thinking like little MCOFU bows and ribbons.", said Editor O'Darkness. Prince went on to say, "We have this true she-devil in a myriad of provocative poses, but the real problem was getting her to smile We tried everything but could only get her to grin when we said 'Say Overtime!" The guards union asked that Ms. Urine wear a "We Walk The Toughest Beat In The State" T-Shirt with red fishnet stockings, but the Queen of Mean stated she was going to with her "Save a Student, Ride a Principal" T-Shirt and Elvira three inch spike heels. "I personally like my Paris Hilton style over the shoulder shots.", Lt. Urine went on the record to say. The only other known shots of Lt. Urine were illegally gained from the "internet cloud" and depicted her in Moynhan's Bar tank top with some sticky substance all over her face. Former Lt. Mugsy denies he was involved but assures us the substance was mayonnaise.

Proctor and Gamble has announced that it plans to bring back one of America's most beloved commercial characters, Mr. Whipple of "Don't Squeeze The Charmin" mega fame. The big news for ShirleyWorld is that the new Mr. Whipple will be played by our own home-grown paper products thief Sgt. Bitch!
"We auditioned quite a few talented actors but none had the feel for shithouse paper that Sgt. Bitch had." said Cecil D. DeWipe, the producer/director of the new commercials. "Sgt. Bitch knows his asswipe and to top that off he is a bit of an asswipe himself. Who better to play Mr. Whipple than a toilet paper expert extraordinaire like Sgt. Bitch?" We also hear rumors that General Foods is also auditioning Sgt. Bitch for possible mayonnaise and catsup commercials. "This ten-finger-discount Houdini of Visiting Room condiment capers has a real talent for sauces and spreads. He has made more mayo disappear than Jared from Subway. I can see The Bitch now, dressed in his P-Town khaki's and Wife Beater T eating a Corned Beef on Rye with a healthy dose of Miracle Whip reciting the line, "Eat it like you stole it!" We can only imagine what his acceptance speech would be: "I'd like to thank the Academy and MCI ShirleyWorld where I learned the fine art of T-Paper Tuckin' and mayo pak purloining." Sgt. Bitch may be seen walking the Red Carpet with his 1980's mirror sunglasses and sweat stained MCOFU trucker's hat!

One of the fairly new minted guards from the last round of new hires, CO Deep Throat (this name is not given due to sexual proclivity but because of her "whiskey tenor" voice), was lugged off the compound under real suspicion of planning to "lug" contraband into the facility. This young woman (I think is is a woman at any rate) soon learned that she was working with a bunch of degenerates, drunks and wife beaters, and it did not take her long to find friendship with convicts rather than the guard force. Of course manipulative cons took advantage of this "hit every branch on the way out of the ugly tree" waif and tried to get her to "lug" in the usual booty. This joint is so full of suboxone, wee, K2, vodka, etc., that there is NO way it is coming in through the visiting room. Guards have lugged drugs into the "hole" and they had to change all the guards who worked there as a result. Poor Deep Throat saw how lax it was in here, duded nodding out in the chowhall right in front of guards, that she felt it would be no problem lugging in some mind expansion goods for one of her new "friends", but discounted the fact that these active drug users will sell you out for a sixteenth of a suboxone strip; it is getting crazy in here; ShirleyWorld is now SuboxoneWorld and Superintendent Wry On keeps Rubber Stamping the foolishness of Lt. Peckerwood's and Lt. McHardly's while ignoring the real problems. Take my water bottle and clothesline but let the dudes keep their weed and suboxone. Maybe Deep Throat will beat the rap; if s she can sing baritone for the MCOFU Barber Shop Quartet!

There is still no librarian at ShirleyWorld. The prison regulations require that the Prison Library be the "Information Center" of the prison, with the librarian having internet access to the vital "free speech" for the prisoners. Deputy Denied-Oh has dragged her pointed tail for well over a year in securing a librarian for the facility as this allows her to stem the flow of information which could be used to tear the curtain away from her Wizard of Oz position. If prisoners get educated, if they build self-esteem, then they may do what any caring person would do and attempt to expose the foolishness that is prison and these 30 year plus employees who have been on the state dole for far too long. Deputy Denied-Oh engages in her symbolic "book burning" each and every day. Men cannot find out information that is essential to their access to the courts, find out information that is essential to their access to the courts, reentry needs, rehabilitation endeavors, or other life building activities. Deputy Denied-Oh drove out the last two librarians with her totalitarian abuse; demanding things be "her way or the highway", and now we have been without any sort of librarian for over a year. It may now seem like a big deal to folks in the free world, but it is. Men here have very few options; they can use suboxone, gamble, drink home brew, be on the "waiting list" for programs, or they can choose to educate themselves through self-help in the library - but alas, WE HAVE NO LIBRARIAN. All of our self-help needs must go through Deputy Denied-Oh and we all know the answer to any proposal that is "non-Stockholm Syndrome" and progressive: they are DENIED-OH!

Thanks for writing! I finished the transcription for your post. LOVE your sense of humor!
(scanned reply – view as blog post)
uploaded Dec. 11, 2014.  Original (PDF)

BostonRocks.......I think you should be aware of the way in which the previous 'manager' was treated by #W66927 so I have copied one of her posts on the subject.

"To whom it may concern, if you choose to assist Cure Arm, make sure it only entails sending out email's and updating fb page,because that is not the only task you will have, you will have to make lots and lots of copies which then requires mailing hence postage charges. If you can afford it then that is a blessing, but be careful, don't make the mistake of being human because if you have personal issues in your life you will be dismissed without warning, as I was , all because I worked, have health problems and attended school, yet I was doing cure arm work. Best wishes, Lynette Reicks-Carson " 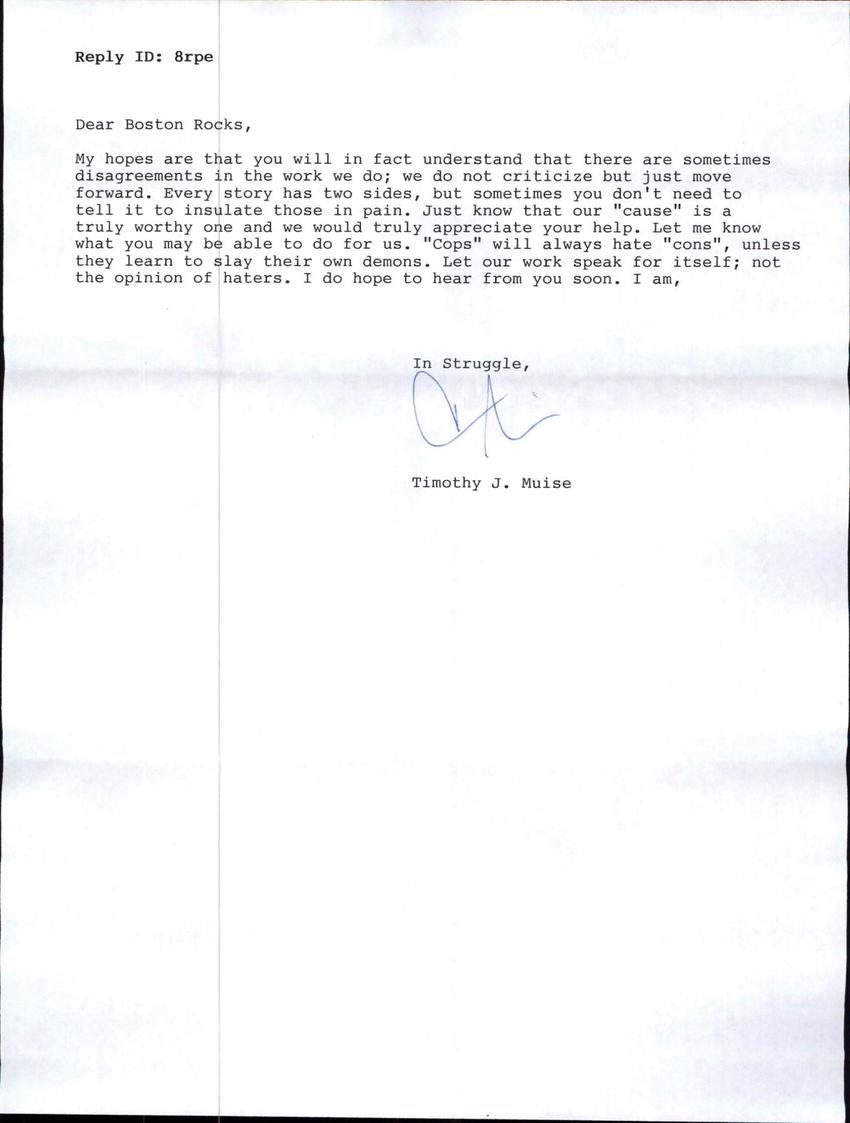