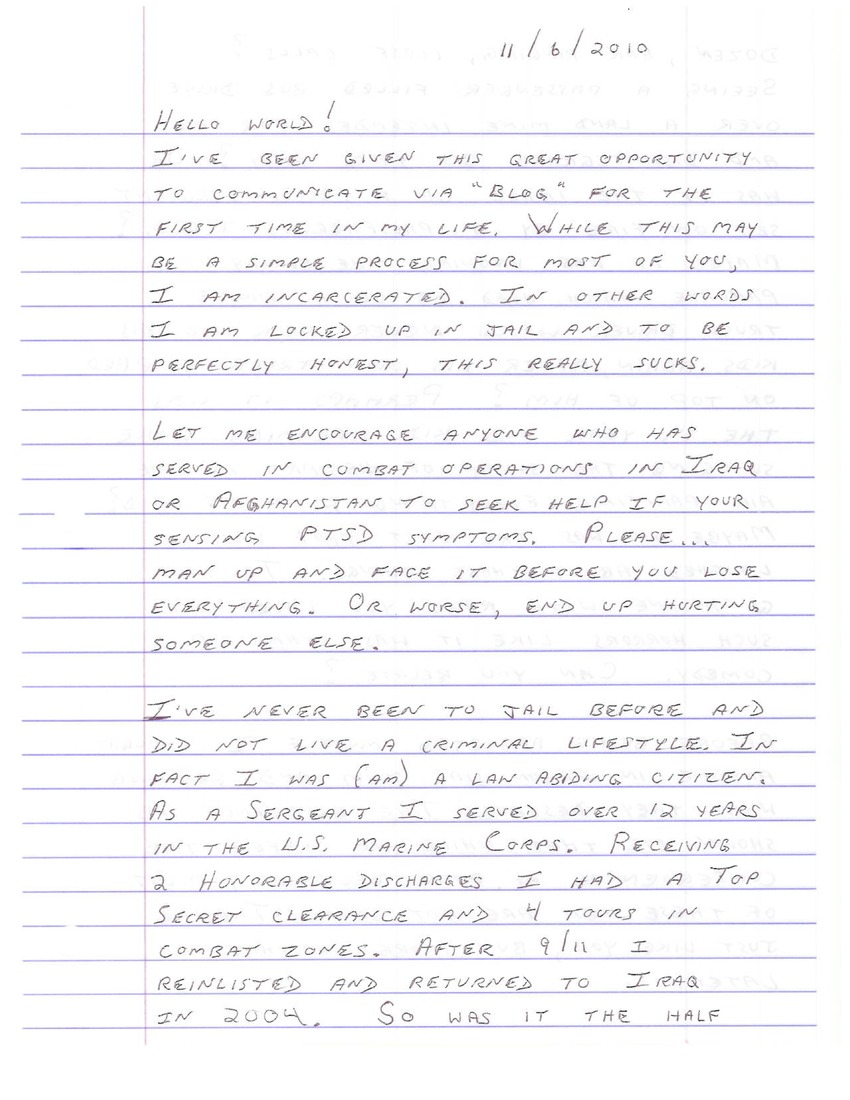 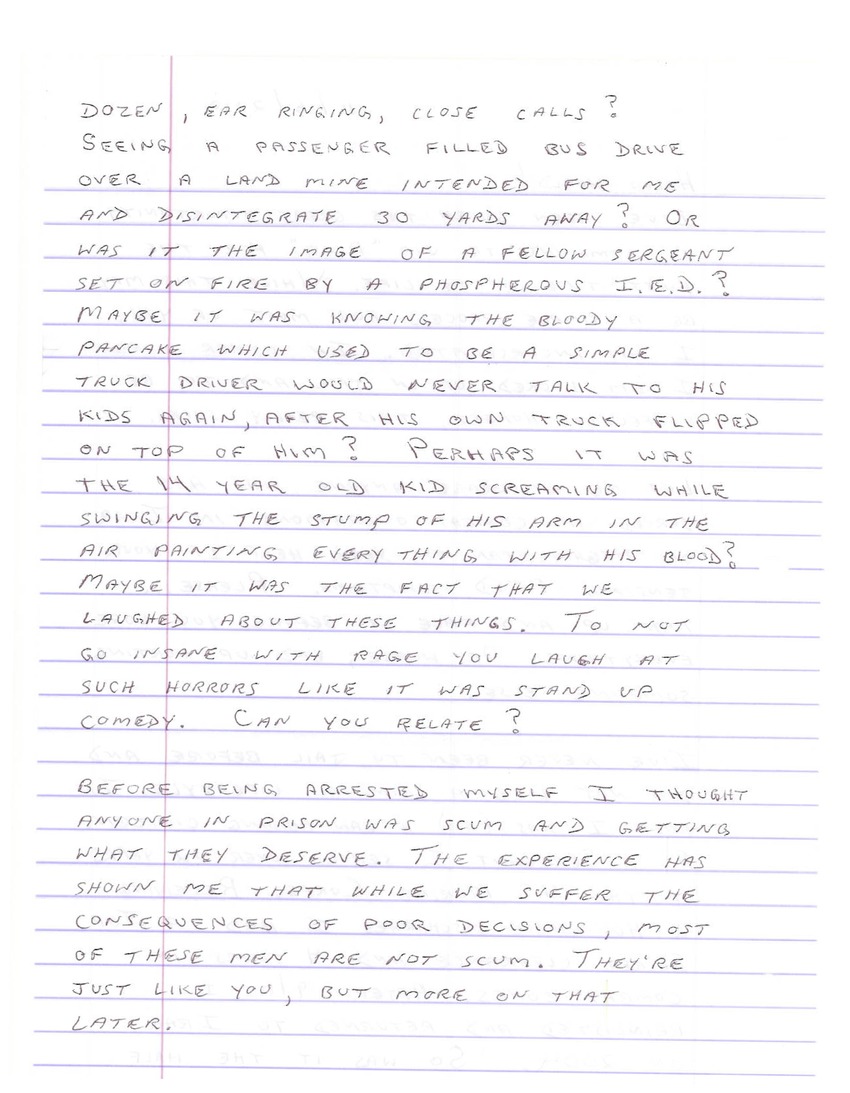 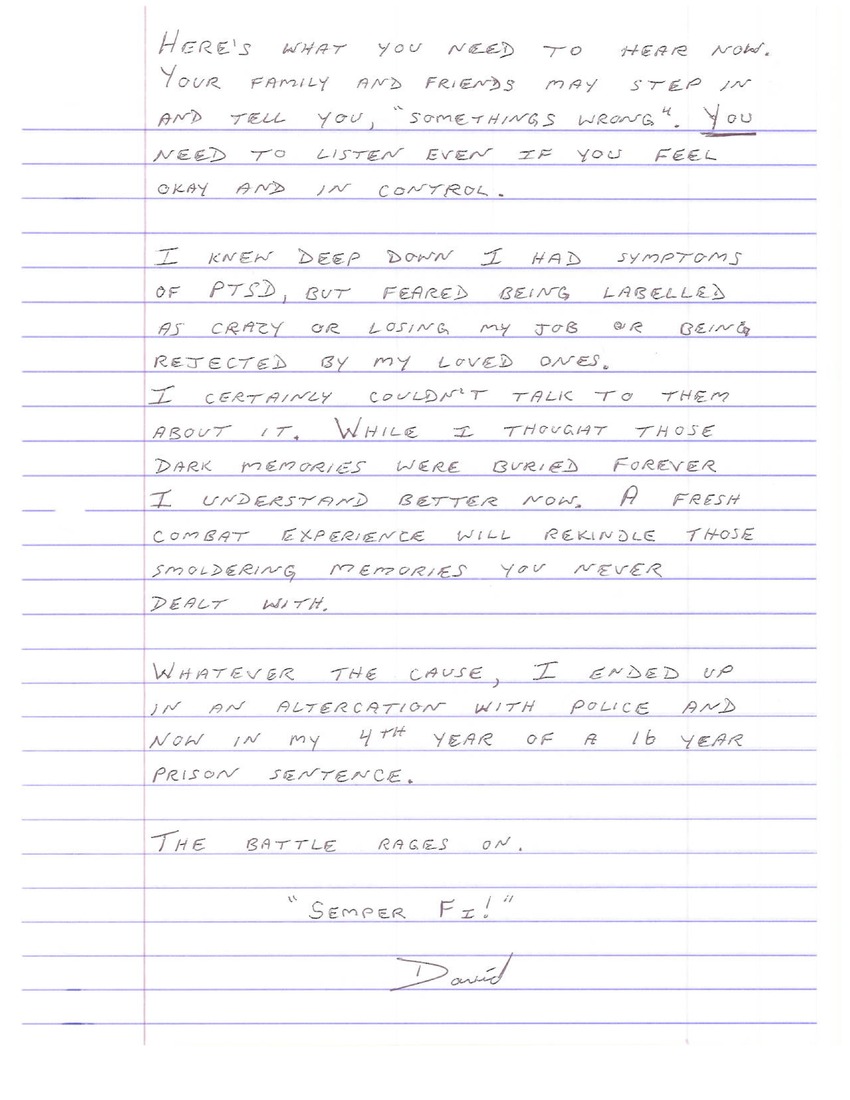 Hello world!
I've been given this great opportunity to communicate via "blog" for the first time in my life. While this may be a simple process for most of you, I am incarcerated. In other words I am locked up in jail and to be perfectly honest, this really sucks.

Let me encourage anyone who has served in combat operations in Iraq or Afghanistan to seek help if you're sensing PTSD symptoms. Please...man up and face it before you lose everything. Or worse, end up hurting someone else.

I've never been to jail before and did not live a criminal lifestyle. In fact I was (am) a law abiding citizen. As a sergeant I served over 12 years in the U.S. Marine Corps. Receiving 2 honorable discharges I had a top secret clearance and 4 tours in combat zones. After 9/11 I reenlisted and returned to Iraq in 2004. So was it the half dozen, ear ringing, close calls? Seeing a passenger filled bus drive over a land mine intended for me and disintegrate 30 yards away? Or was it the image of a fellow sergeant set on fire by a phosphorous I.E.D? Maybe it was knowing the bloody pancake which used to be a simple truck driver would never talk to his kids again, after his own truck flipped on top of him? Perhaps it was the 14 year old kid screaming while swinging the stump of his arm in the air painting everything with his blood? Maybe it was the fact that we laughed about these things. To not go insane with rage you laugh at such horrors like it was stand up comedy. Can you relate?

Before being arrested myself I thought anyone in prison was scum and getting what they deserve. The experience has shown me that while we suffer the consequences of poor decisions, most of these men are not scum. They're just like you, but more on that later.

Here's what you need to hear now. Your family and friends may step in and tell you, "something's wrong." YOU need to listen even if you feel okay and in control.

I knew deep down I had symptoms of PTSD, but feared being labelled as crazy or losing my job or being rejected by my loved ones. I certainly couldn't talk to them about it. While I thought those dark memories were buried forever I understand better now. A fresh combat experience will rekindle those smoldering memories you never dealt with.

Whatever the cause, I ended up in an altercation with police and now in my 4th year of a 16 year sentence.

The battle rages on.

What is 'scum'? Just something we don't understand.

Thank you for trying to spread understanding. Your really-well-put-together letter helps make the world better.

- Kartik,
San Francisco
I'm fascinated to know - what did you do that got you 16 years in prison?

6 seasons of Oz is all I have to go on for what it must be like. I can't imagine why anybody would go to war, but perhaps that's because I live in what is relatively paradise.

Ryan
You write, "I knew deep down I had symptoms of PTSD, but feared being labelled as crazy or losing my job or being rejected by my loved ones."

That sure is common: fear of the consequences of honesty. When in reality, honesty is what is going to help us.

Thanks for your letter. I hope more people read it and take the message to heart.

I served with you at 2Bn 8Marines and during 89 Med Cruz. I am so sorry to hear what you had to go through and will go through over the years. You were always a man of great compassion for his troops and ensure there welfare came first. I wish we would have kept in touch or been there for you in your time of need. If there is anything I can do, do not hesitate to ask.

Over 30 of us from 2/8 are kindling the Marine Brother hood on Facebook and there are many warm comments about helping right the wrong of Sr. Enlisted mental games, I am sure you remember.

Dave you will be in my prayers and my thoughts daily as you were and still are a Marine and one of my Brothers who will not be left behind. As this is public, I have your address and will write a more personal letter to you. I will try to include some of the comment but don't know if they will make through the screening of mail.

Just look at this as a long Med Cruz w/o Liberty (or water or a boat...LOL) and one day the Ship will pull back in for you.

I will remain a friend and brother to you

A.B. Siler
Sgt. USMC
I served with you at 2Bn 8Marines and during 89 Med Cruz. I am so sorry to hear what you had to go through and will go through over the years. You were always a man of great compassion for his troops and ensure there welfare came first. I wish we would have kept in touch or been there for you in your time of need. If there is anything I can do, do not hesitate to ask.
Copied and pasted from Brent but I feel the same way as he does. You may of remembered me as Lcpl Palmer. My prayers are with you and hang in there I think you may of even told me that a few times.I hope things do work out the best for you and for better or worse Marines will always be with you.

Buddy Palmer
Sgt.Linley This is Martin Silva(lcpl) served with you in 2/8 comm. i want you to know I appreciated all that you did to try and help me when I was being abused by certain staff ncos. I did eventually get out of that unit and have a great experience for the remainder of my service.
We all speak and think very highly of you and always have and no matter what the circumstances you will always be a great Marine . Stay strong and keep the faith